Riot Games and Super League Gaming announced today that competitive 'League of Legends' play is coming to movie theaters. Super League Gaming will be holding two types of competitions, City Champs and City Rec, at different cities across the United States. The company describes City Champs as a competition that "will pit cities against each other for bragging rights" while City Rec is a relaxed series of pick-up games.

So far confirmed cities include Los Angeles, Miami, Chicago and Dallas. More cities will be revealed in 2017. The first Super League Gaming event. The first event will take place November 14th in Los Angeles at theCinemark Seven Bridges and IMAX. 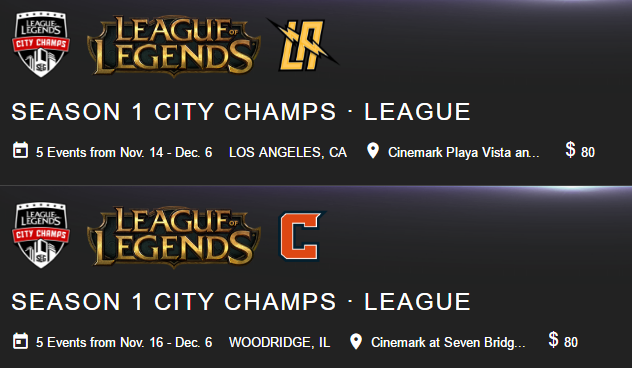 "We are pleased to partner again with Super League Gaming to expand the in-theatre gaming initiative and are eager for the City Champs and City Rec offerings," said Cinemark's Rob Carmony, whose company will host the events. "Cinemark leads the industry with in-theatre gaming and is commonly recognized as the gaming theatre circuit, where players go to have a social and communal gaming experience."

Full information, including how to participate and a list of upcoming events, can be found on Super League Gaming's website.