Asteroids to the left of me, pirates to the right... it's cel-shaded RTS spaceshipping.

Editor's Note: These 'Void Destroyer 2' impressions are based off of the debut Early Access version. (See here.)

'Void Destroyer' was a Kickstarter project released in January 2015 by Iteration 11. It received little coverage and when Iteration attempted a Kickstarter for the sequel last fall, and it was unable to come up with even half the funds of the original. The campaign failed, but Iteration has pressed on and is still working on the game with plans for a full release in 2017. 'Void Destroyer 2' entered Steam Early Access on September 22.

'Void Destroyer' takes its influence from early space sims like 'Wing Commander: Privateer' and 'Freelancer'. The player controls a ship in 3D space and can explore an open world of combat, mining, and trade. With the proceeds from these activities, the player can upgrade their ship and purchase new ones, and eventually own a fleet of their own. Instead of a solar system or even an entire galaxy like in 'Elite', 'Void Destroyer 2' takes place in a single asteroid belt in the Oort Cloud, a (theoretical) real-life astronomical feature on the edge of our solar system. Despite the "small" setting, at least in terms of space, the asteroid field manages to have a surprisingly large population of NPCs, not to mention rocks, space junk, and other things to poke about. 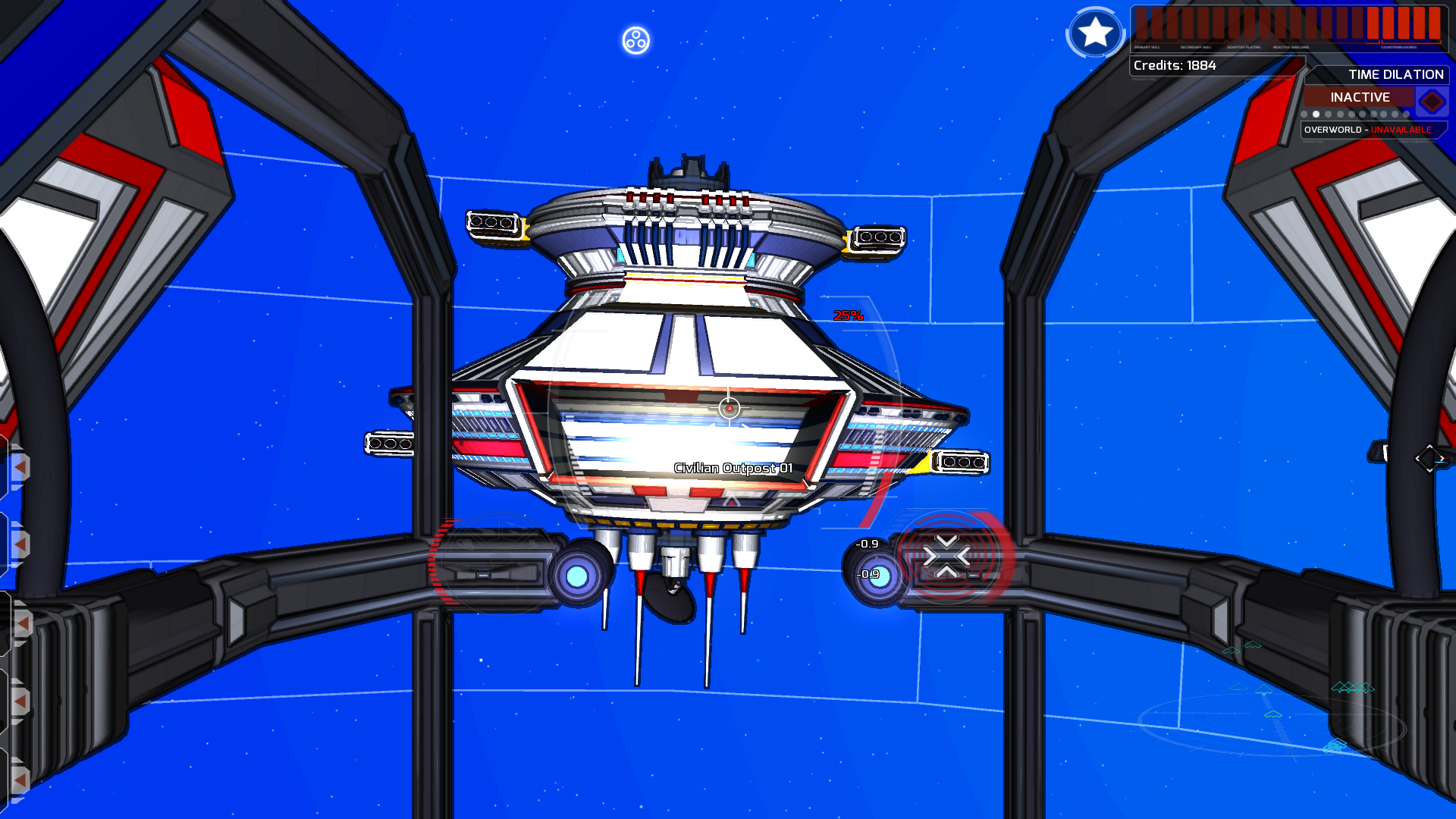 Once I had learned basic ship handling, I wobbily set out into the asteroid belt to make my fortune. Like the controls, the economic side of 'Void Destroyer 2' isn't holding any hands, at least not at this stage of development. With a mission in tow I zipped out into the middle of the belt to destroy some debris, but it wasn't happening. I went right where the mission told me to go (I think? The overworld map is not user-friendly) and shot up some debris, but nothing happened. Another ship showed up so I shot him too and earned some bounty credits, which is the next profession I turned to after the missioning didn't go in my favor. 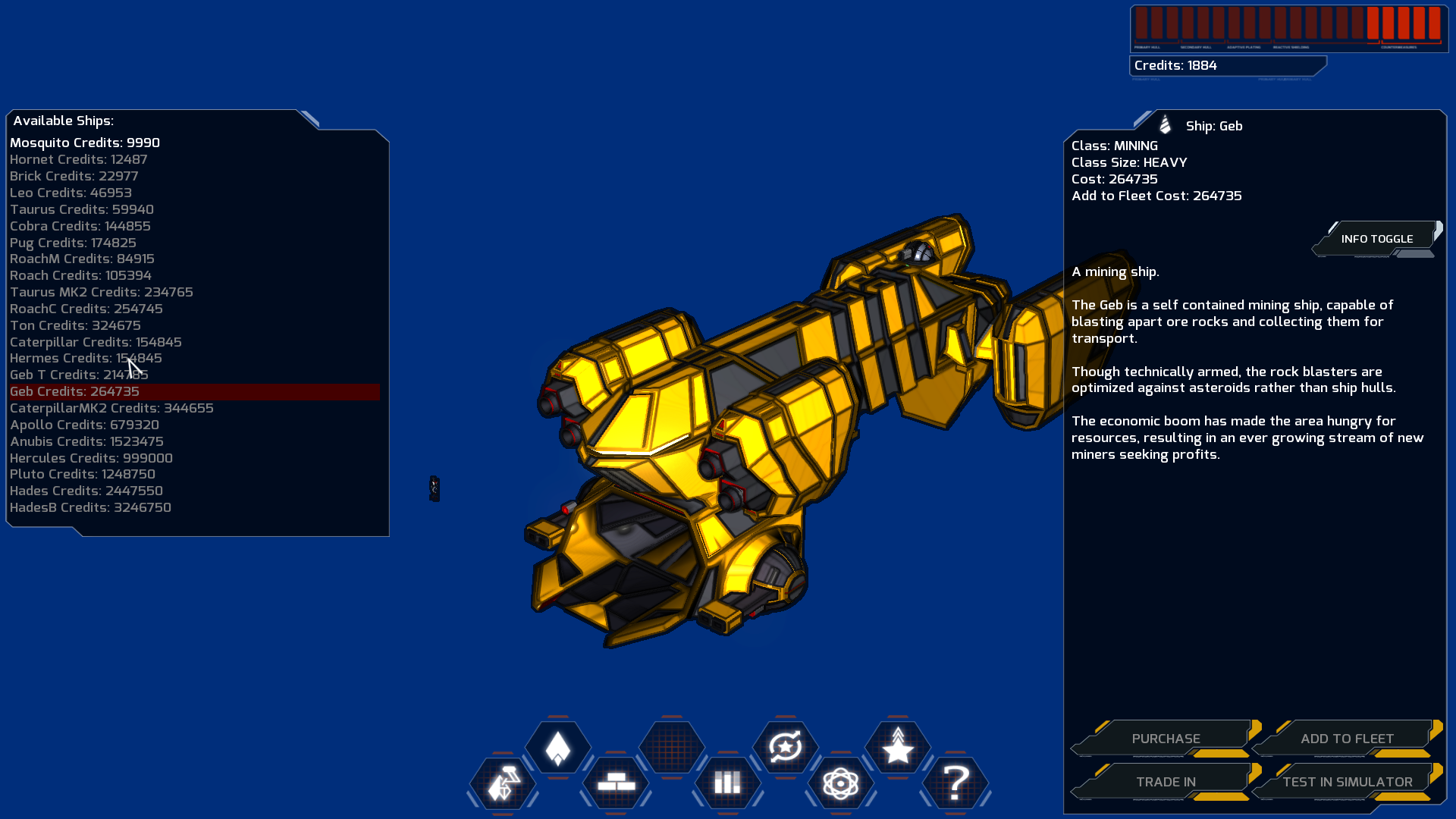 While not billing itself as strictly a spaceflight sim, 'Void Destroyer 2' still has extremely technical controls that can be difficult to learn in anything other than a basic capacity. The tutorial is woefully incomplete and the beginning of the game is rocky as a result. There is a salve in the form of the simulator which provides a little more training. Some of the advanced mechanics, like RTS fleet management, were out of our reach for now. My first foray into owning my own fleet went poorly. I hired a miner and took him out to some asteroids, and then stared blindly at the rock while looking through all of the menus to figure out the keybind for "Make my miners mine this asteroid". Before I could conquer that Herculean task, a pirate destroyed me. So much for the glory of the empire. 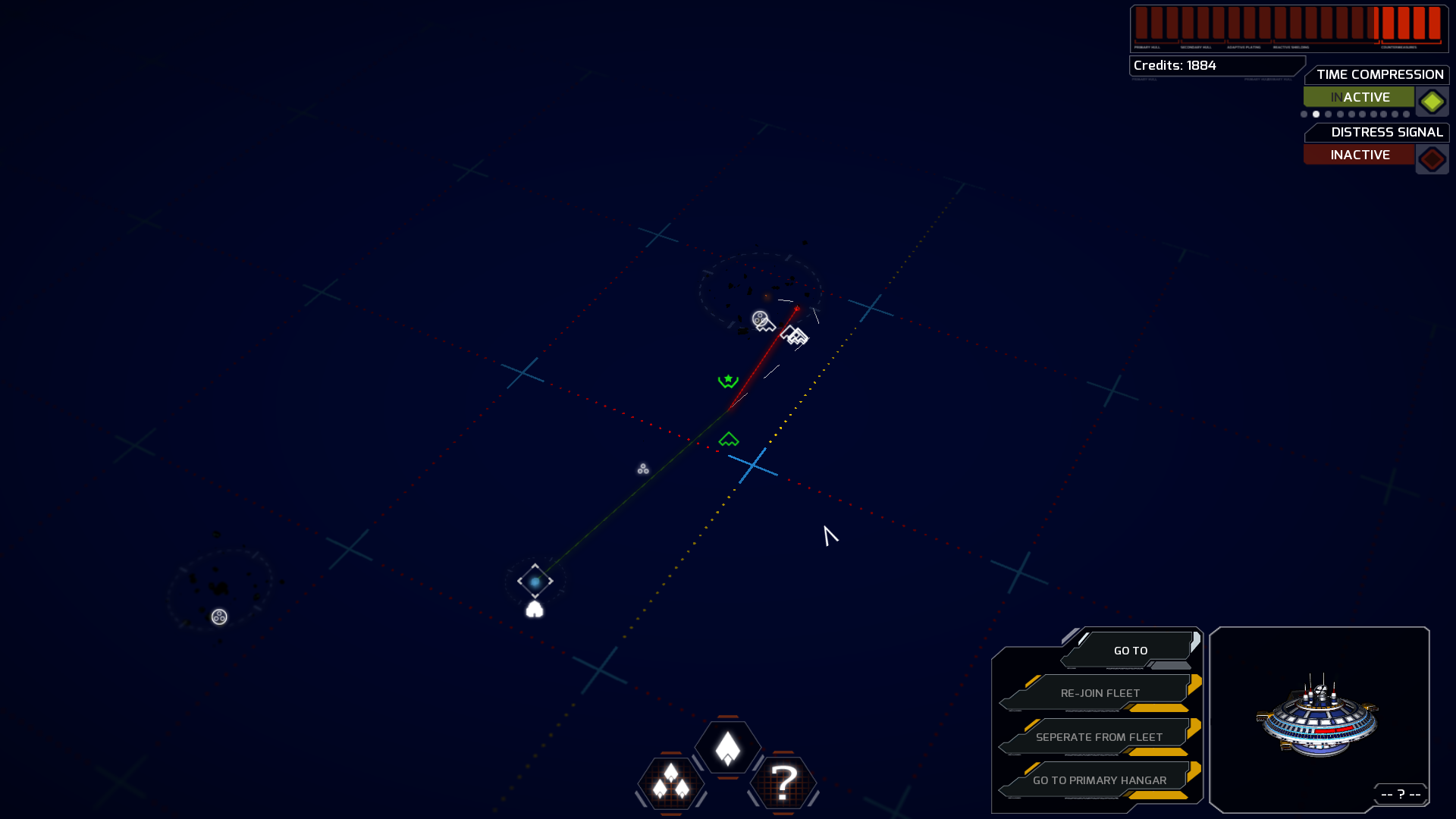 Combat is fun at first but the 1v1 fights don't have a lot of depth. This could change when the RTS fleet stuff is fleshed out, but fighting one ship at a time is little more than turning the spacecraft and holding down the right mouse button for a few seconds. There are strange bugs invading the AI, like the enemy ships inexplicably stopping dead in space and not resisting while they are blown up. Despite the technical nature of the controls, physics seems less important than action. This isn't necessarily a bad thing; it just makes it more challenging to predict ship movement - ships tend to go where they please, free of the laws of physics, and acceleration is near instant. 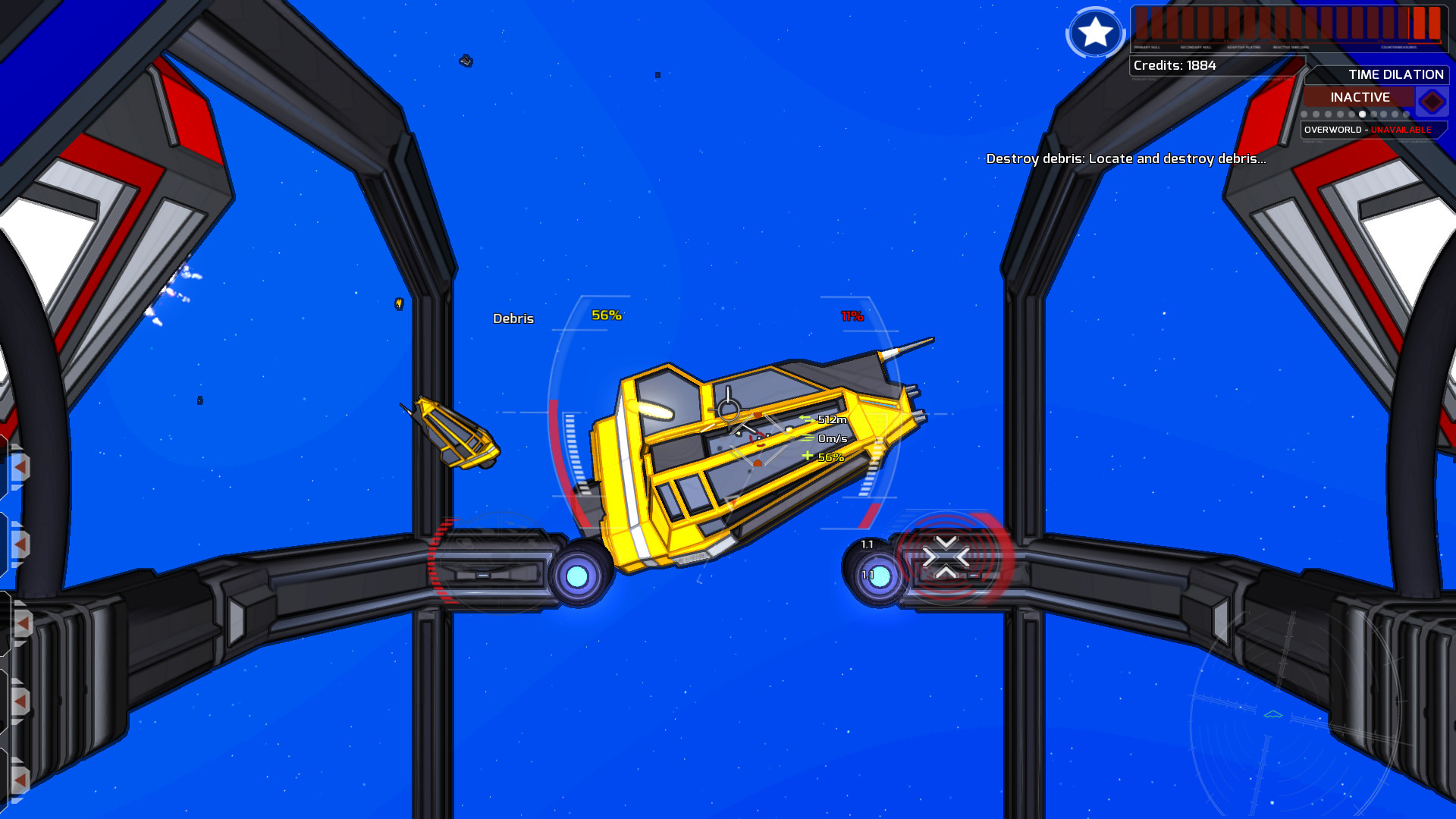 'Void Destroyer 2' has a distinctive visual style that is not typically seen in this genre. It is cel-shaded, not unlike 'Borderlands' but with more edges and an emphasis on stark color contrast. Space itself is colored light blue, making it seem less like space and more like sky or water, and not as intimidating. I wouldn't go so far as to say it's "cartoonish", but the game's imagery definitely gives it a more lighthearted feel. The UI and menus are cluttered with numbers and arbitrary squiggles of all kinds - they are probably instrumentation, but are presented more as white noise that doesn't really help the pilot maneuver around. The sound is also an early stage of development. It has a deep echo quality and low fidelity, and audio cues like shooty lasers sound like they were recorded in a small bathroom or maybe the inside of a washing machine. Other noises are tinny, unrecognizable, or simply absent. The good news is that the game plays briskly on its bespoke engine, rarely dropping from 60fps. 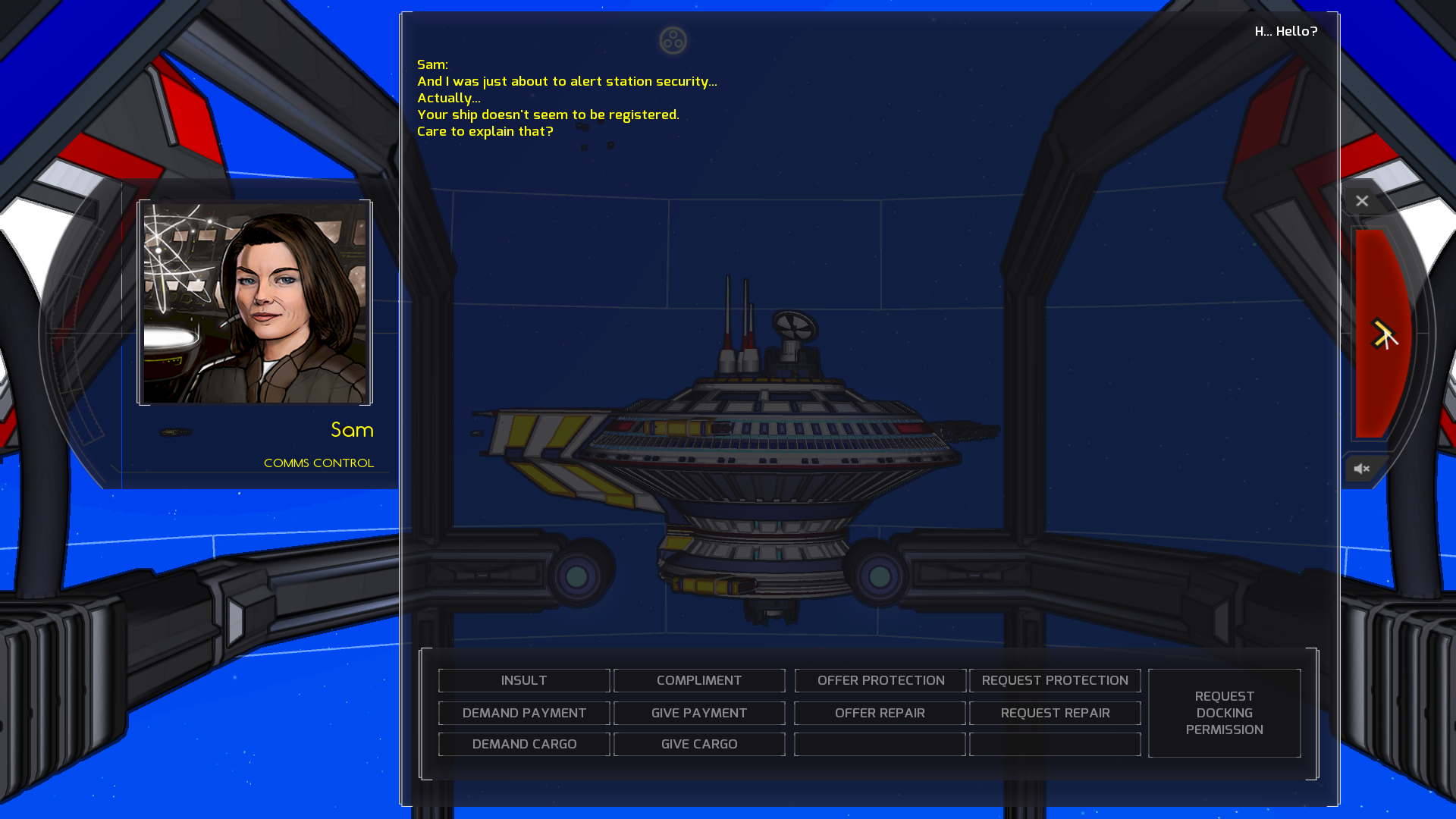 The first game in the series enjoyed a niche following upon its PC release, and 'Void Destroyer 2' already has some popularity in the early access crowd. It has a lot of work left to do, however, to become a fully functioning space sim and video game. Most notably it needs a way to introduce non-'Void Destroyer' players to its mechanics and conventions. If it can do that, and build a user-friendly UI around it, it would be a space game I'd be happy to play. What it does have going for it is a very accessible and transparent developer who has navigated the pitfalls of early access before. This is made even more impressive by the fact that Iteration is made up of basically one person (Paul Zakrzewski) who apparently does not sleep, if his forum activity is any indication.