Did I mention 'Shovel Knight,' 'Bastion,' and 'Helldivers?'.

Take it from someone who has played it, loved it, and been killed by it many times; the upcoming PS4 release of 'Titan Souls' is practically worthy of declaring a national holiday (at least in every nation on earth). The one hit you're dead, boss-fighting, spirit of 'Demon's Souls' game is coming to the PS4 on April 14th. That's great news. 'Titan Souls' will come in at price of $9.99 and will be Cross Buy with the PS Vita. That's also pretty awesome. Finally, PS Plus members will get a launch week discount of 10% off for a price of $8.99. That's Spring Fever awesome.

While I'm particular to 'Titan Souls,' it's just one of eight new digital games coming to the PS4 over the next eight weeks that is being featured with a Spring Fever launch week discount of 10% off. Nearly all of these titles feature some kind of Cross buy component. The PS4/PS3/PS Vita bound 'Shovel Knight' (review here) is another highlight. 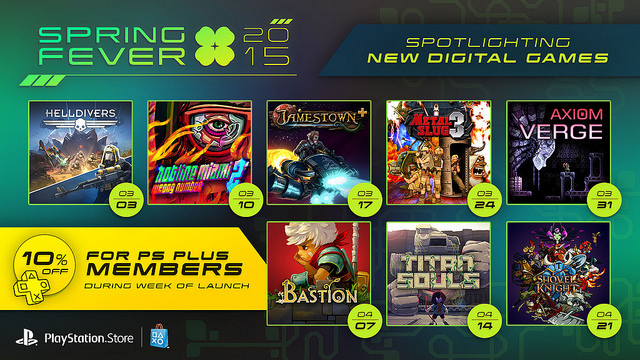