Another reason to upgrade.

Microsoft is quite keen on getting users to upgrade to Windows 10, and in turn, is willing to bring one of the Xbox One's biggest exclusives to the new OS to encourage would-be upgraders.

Believe it or not, but the free (but upgradable) for Xbox One owners, 'Killer Instinct' is one of the this generations more important exclusives, and yet, it has been that same exclusivity that has kept this returned classic from growing into a bigger part of the fighting scene. (It's featured in tournament play, but it could be bigger. The Xbox One arcade stick situation is a pricey barrier as well.)

'Killer Instinct' on the Xbox One has two seasons of characters, and this jump to PC ought to see an explosion in people playing. With crossplay versus, this appears to be a win-win for current fans. With more details still to come, and the trickiness of the PC platform (for a fighting game), this is one E3 announcement to really follow. 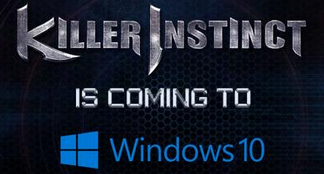