Players can be a mechanized vampire.

Guerrilla Cambridge's PlayStation VR launch title 'RIGS Mechanized Combat League' looks to be one of the pillars of the launch line-up, so it's no surprise that Sony has given it the spotlight this week over at the PlayStation Blog. Today's update focused on the six different abilities that the game's 24 mechs will use. This essentially divides the multiplayer-focused game into six different classes.

One of the coolest abilities is called Vampire, which allows players to repair their armor by defeating opponents. Other skills revolve around getting up close and personal with the enemy such as Nuke, which has players detonating their power core when they are destroyed, and Knockout, which provides a powerful melee attack that can make enemy Rigs malfunction. Other abilities include the defense-focused Carapace (which gives the player energy shields), Engineer (which is a support class), and the stealth class called Thief.

Check out the trailer for 'RIGS Mechanized Combat League's six abilities below:

You can find the latest info on 'RIGS Mechanized Combat League' linked from our Video Game Release Schedule. 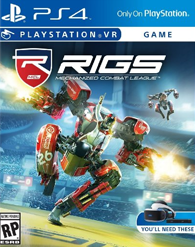