Includes three titles and leads right up to the next-generation 'Kingdom Hearts III.'

Square Enix is bringing 'Kingdom Hearts HD 2.5 HD ReMIX', the direct follow-up to 'Kingdom Hearts HD 1.5 ReMIX' to the PS3 next week, and to stoke the fires and remind fans just how special the disney JRPG series is, the publishers has dropped not one but two new trailers.

Naturally, what's being showcased here is a world the is co-inhabited with classic Disney characters and various icons from the 'Final Fantasy' series.

You can find the latest info on 'Kingdom Hearts HD 2.5 ReMIX linked from our Video Game Release Schedule. 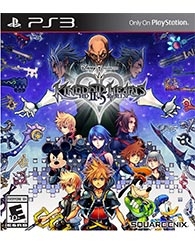