And Ornage is a Best Buy exclusive.

At E3, Polk showed off their newest headset, the Striker. Today, Polk Audio announced that the Striker ZX, a version that comes bundled with Polk's new Xbox One Chat Adapter, is available now for $89.99. The orange variant is a Best Buy exclusive, while the Black Out Black and Skyline Blue colors can be had from many retailers, including Amazon.

At that price point, these headsets can be considered an attractive option for anyone looking to move beyond the bundled Xbox One headset. The finish of the models at E3 was nice, and the retractable mic seemed to work well. The included Polk Xbox One Chat Adapter (which is often referred to as wireless, but in fact connects the headset to the controller via 46-in. cable) may be the best part as it should allow the headset's driver and mic design to play well with the Xbox One.

Here are the feature details from Polk:

Audiophile-Grade Sound Quality – At this price point, gamers now have access to a great-sounding headset from a leading high-performance audio brand. Dynamic Balance® driver technology creates a wider and more impressive frequency range with sharp details and no hints of strain or resonances, while a chat loop feature allows for clear chat by enabling gamers to hear their voices in the headset which prevents shouting

New Wireless Chat Adapter for Xbox Gaming – The headset comes bundled with a custom-built, audio tuned wireless adapter that connects from the headset to an Xbox One controller and features new buttons that give users complete control over chat and volume at their finger tips

Retractable, Omnidirectional Boom Mic – Features a flexible, 7-cm. extension cable that adjusts to different lengths and angles, and tucks away nicely when not in use

ProFit™ Comfort – Allows for optimum comfort and concentration during gameplay thanks to a lightweight, cushioned headband with plush, pivoting ear cups

Another version of the Striker, the Striker P1, is positioned as a multi-platform model and is due out soon. 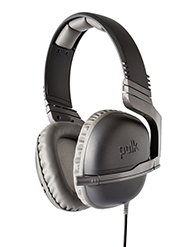