As fans of Quantic Dream titles like 'Heavy Rain' and 'Beyond: Two Souls' might already know, there was a PS2 era pre-runner. This 2005 game had different names for different territories, but more than that, it's a game packed full of moments unlikely to be found in any other game, even if the story spins higher and higher as the player gets deeper in.

And now, Aspyr Media, with the blessing and insight of Quantic Dream, has released. 'Fahrenheit: Indigo Prophecy Remastered.' Built using the uncensored international version of the game, this new version features remastered HD graphics and true widescreen support, (up to 2880 x 1800 support on PCs), a new touch-based control scheme for phones and tablets, full controller support across all platforms (this is quite important for the PC version), and even offers the ability to switch on the fly between the original and updated visuals.

The new gams is out now on iOS, PC, Mac and Linux. The PC/Mac/Linux version can be had for only $9.99. (Order here.) Aspyr Media has promised that an Android version (with controller support) in in the works, but that there are no current plans for a new console version.

Both the computer and mobile versions of the game support French, German, and Spanish (full audio and subtitles) as well as English. 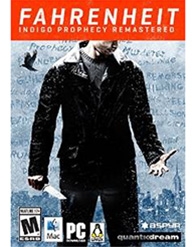