Roll7, of 'OlliOlli' fame, has been busy.  Their labor? The sidescrolling cover-based shooter 'Not A Hero,' which is now set to come to PC, Xbox One, PS4, and PS Vita on May 7th.

Today, the developer got in depth with the game's story. In a criminal-shoot-criminal world, some very capable operators have come together under one banner, the "Vote BunnyLord" banner. BunnyLord is described as an "anthropomorphic rabbit from the future," but a better term for him might just be the "boss."

'Not A Hero' is a game with just a dab of platforming. It's definitely a violent (over-the-top toon style) cover-based shooter, but since it's all side-scrolling, the level layouts reflect that kick of platforming.

Along with the May 7th release date, the fact that 'Not A Hero' is coming to the PS Vita is new development, and one that should be welcome by Vita owners. Roll7 has even shared a look at how the game has changed since its days in 2012 as a prototype. 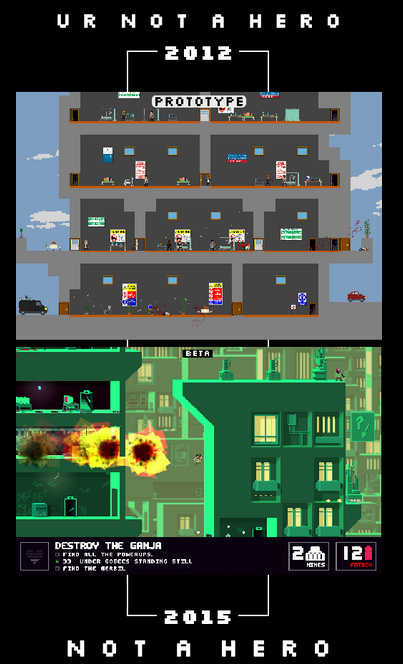 From Devolver Digital, "When an anthropomorphic rabbit/mayoral candidate from the future named BunnyLord needs a murderous loner to clean up the city during the election, Steve heroically offers up his dubious skills with a gun and lack of self-preservation instinct to this mysterious stranger from beyond. Now Steve must clear five districts of crime and recruit new heroes for his cause by sliding, diving, ducking, and taking cover through hundreds of full-throttle shootouts across the city."

You can find the latest info on 'Not a Hero' linked from our Video Game Release Schedule.