There's a lot of ways to present a giant compilation of celebrated games from a company's history. Most just go for the nebulous stream of game screens floating out in hyperspace approach.

Because Rare is, well, Rare, they went for the road less travelled for the intro to 'Rare Replay', releasing in a shade over a week. The opener is a full-on musical, performed by cardboard cutouts of their highlights. Including an operatic verse performed by 'Conker''s Great Giant Poo. Because why would you ever waste that opportunity.

Check out the video below, and stick around at the end of it for a fun little behind-the-scenes featurette about the making of it.

You can find the latest info on 'Rare Replay' linked from our Video Game Release Schedule. 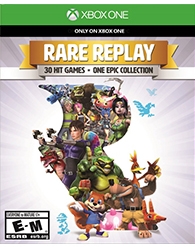