The Battle for Zombies: You Need to Play 'Moving Hazard' To Understand the Joy of Weaponized Zombies

It really changes up the gameplay.

When 'Moving Hazard' was announced, my interest was not especially piqued. "A PvP FPS with zombies," I thought, but then came PAX South 2016. Among a short list of other zombie-filled games, I again thought that 'Moving Hazard' might be forgettable. A short visit to the busy Psyop Games' booth and a romp through a match, and no doubt, there is something to the formula. 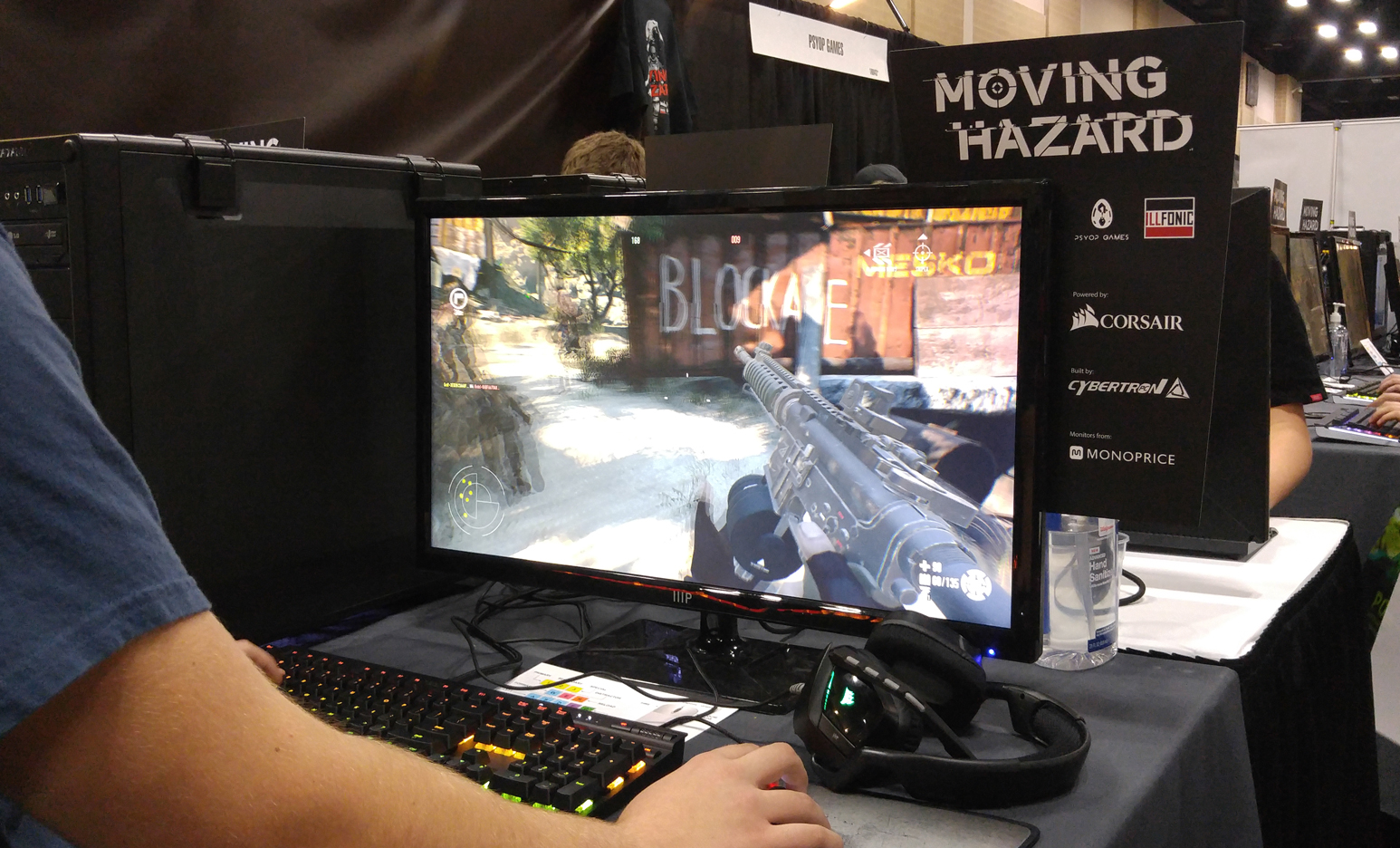 At this stage in development, I'd describe the shooter mechanics, the map design, and the overall look as well, in-development. What made the game a crazy blast to play, though, was the array of zombie-related special weapons at my disposal. Let me put that another way. Let's say you're playing a PvP FPS. You hit the map and, because it's King of the Hill mode, you need to head to a specific spot before it changes. You have a M4 variant, and a strong melee knife strike. The map, meanwhile, has room-sized interiors that interconnect with all the junk outside to make cover and ramps and so on. The map also happens to be filled with zombies, but they are somewhat relaxed. Kind of like 'Day of the Dead,' they are a threat and they will attack you, but as long as you're moving and watching your back, they are easy enough to maneuver around.

Now let's say you get to the king of the hill spot, it's open, and you step in. Now you know, sure as any such mode, that the other team is coming. You're exposed while you're trying to get those King of the Hill points. Instead of retreating or just trying to be a bit faster than approaching enemies, you throw out (using the grenade button) a Pheromone Attractor Molotov at a clump of zombies. Instantly, a red aura permeates the half dozen zombies you just hit. Immediately, it's like the Rage virus from '28 Days Later' has been unleashed, but here's the deal. They ignore you and your team while seeking out the enemy team. 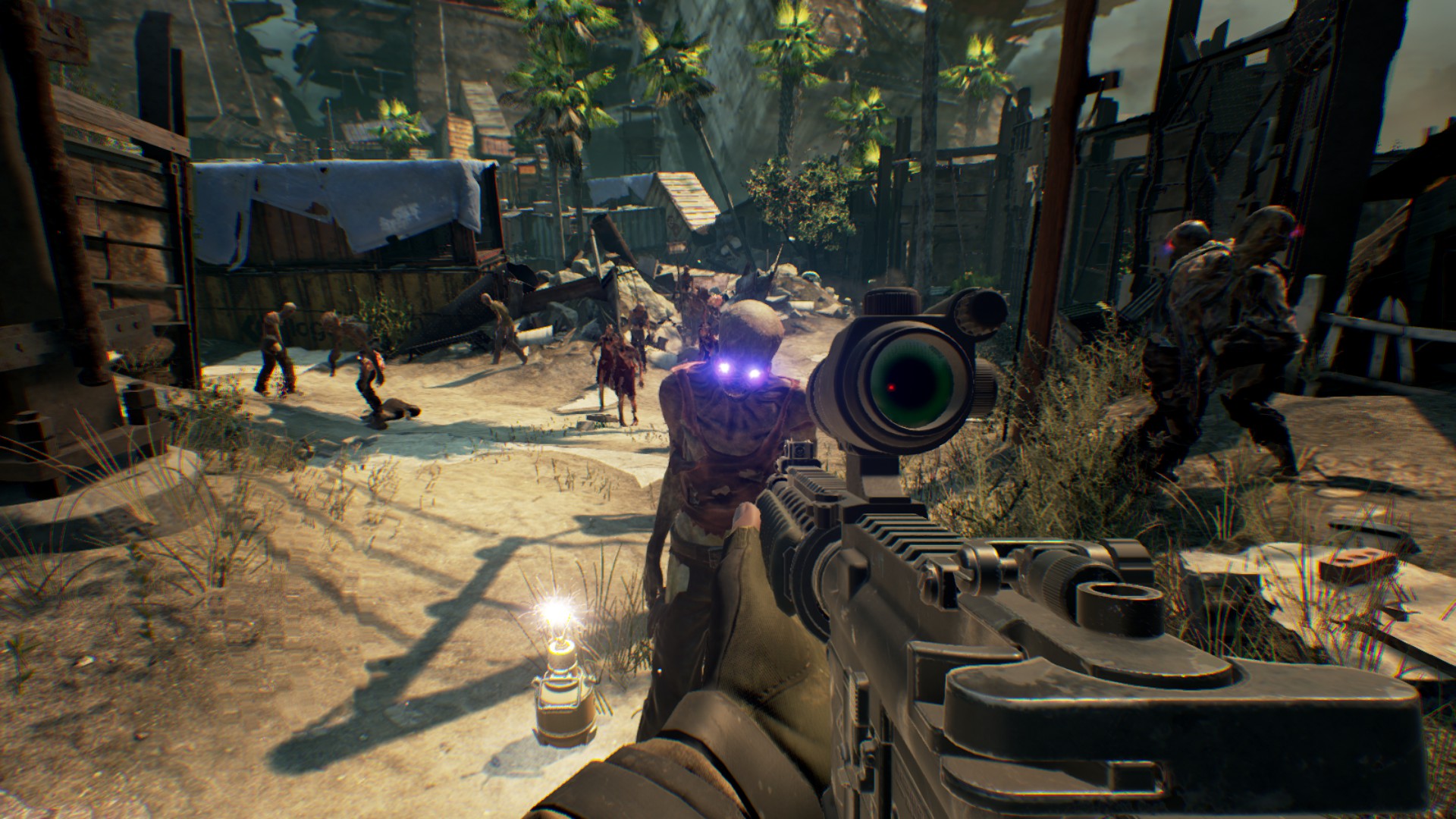 Of course, your team and the enemy team come from a world that has been warring on a city-state level for some time. Battlefields full of zombies are the norm. So when you send those zombies into a killer frenzy towards the enemy, the enemy chooses to respond by dropping their Templer, which repels zombies. Fortunately, since you see your frenzied zombies being repelled just around the corner, you can tell your teammates to attack the enemy staging point before they unleash on you.

And it goes on. You can actually use the Templar to gather a big clump of zombies, and then use a Choas Grenade to frenzy the whole big clump. The rub is that while coming face to face with an enemy is a great time to frenzy zombies (and shoot the enemy), the zombies don't stay frenzied. If you just frenzy them too early, the enemy will easily just frenzy them back at you once they calm down.

Likewise, if you use up all these special weapons, you might end up feeling pretty naked. The mechanics to replenish the supply of special weapons/ammo are still a work-in-progress, but for sure, it's very fun vying to weaponize zombies against the other team. And really, coordinating resources with teammates is good practice.

And that's really it right now. 'Moving Hazard' is coming to PC via Early Access on Steam next month, and I think the zombie mechanics will be a big hit. Six maps and about as many modes are promised, and there are also Early Access plans for single-player scenarios and a horde mode.

For now, it's enough to know that in a military style FPS, sending a wave of zombies against an enemy while shooting at that same enemy is extremely fun. There's great potential there.