From deep within Germany and the parent ZF Group, Cherry, the world's source for unrivaled microswitches, has been busy toiling. Since 1985, the company's MX microswitch has been implemented and roughly duplicated the world over to the tune of 5 billion microswitches today. These MX switches are the key component in the world's best keyboards, and programmers, typists, and gamers have for years sworn by and sought the mechanical keyboard designs that have housed the MX switches.

Cherry's own MX Board 3.0 has been a sterling exampling, and has benefited from twenty plus years of refinements of the Cherry MX Red. And thus, the MX 3.0 has been an obvious go-to for the best mechanical keyboard in the world. The characteristics that have powered this reputation are reliability and performance, which Cherry feels they manage better than anyone, no matter how their designs are copied.

At the 2015 International CES, however, the status of the MX Board 3.0 and the Cherry MX Red was diminished ever so slightly. The cause? The introduction of Cherry RealKey Technology. 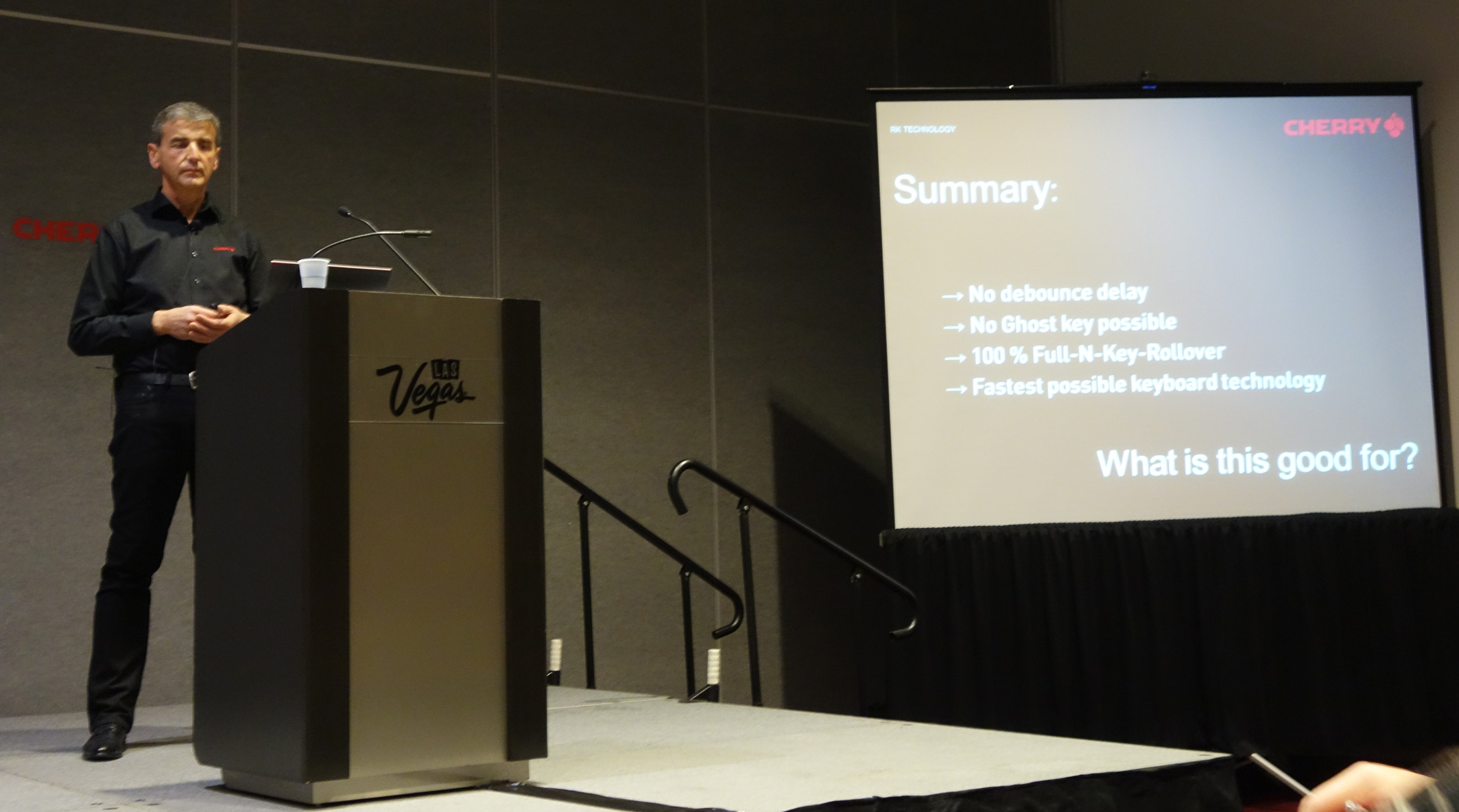 In addition to this whole best in world keyswitch design, the Cherry MX Board 6.0 carries with it a host of features beyond the older MX 3.0 design. An aluminum top housing with sanded finish and grease resistant coating gives the premium product its texture. The keyboard features red dimmable LEDs to provide key illumination and includes magnetically attached rubber palm rest as standard. 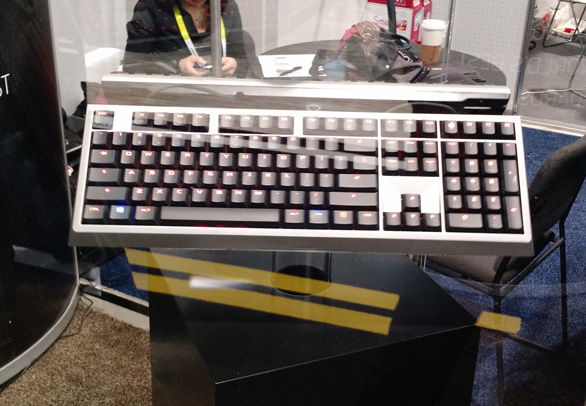 Cherry is quite proud of the MX 6.0, which is due in the spring at a price of $219.99. For that price, buyers can expect a peerless product for at least three years. (Cherry is not in a rush to design a successor to the MX 6.0, and each keyboard is expected to practically outlast its user. 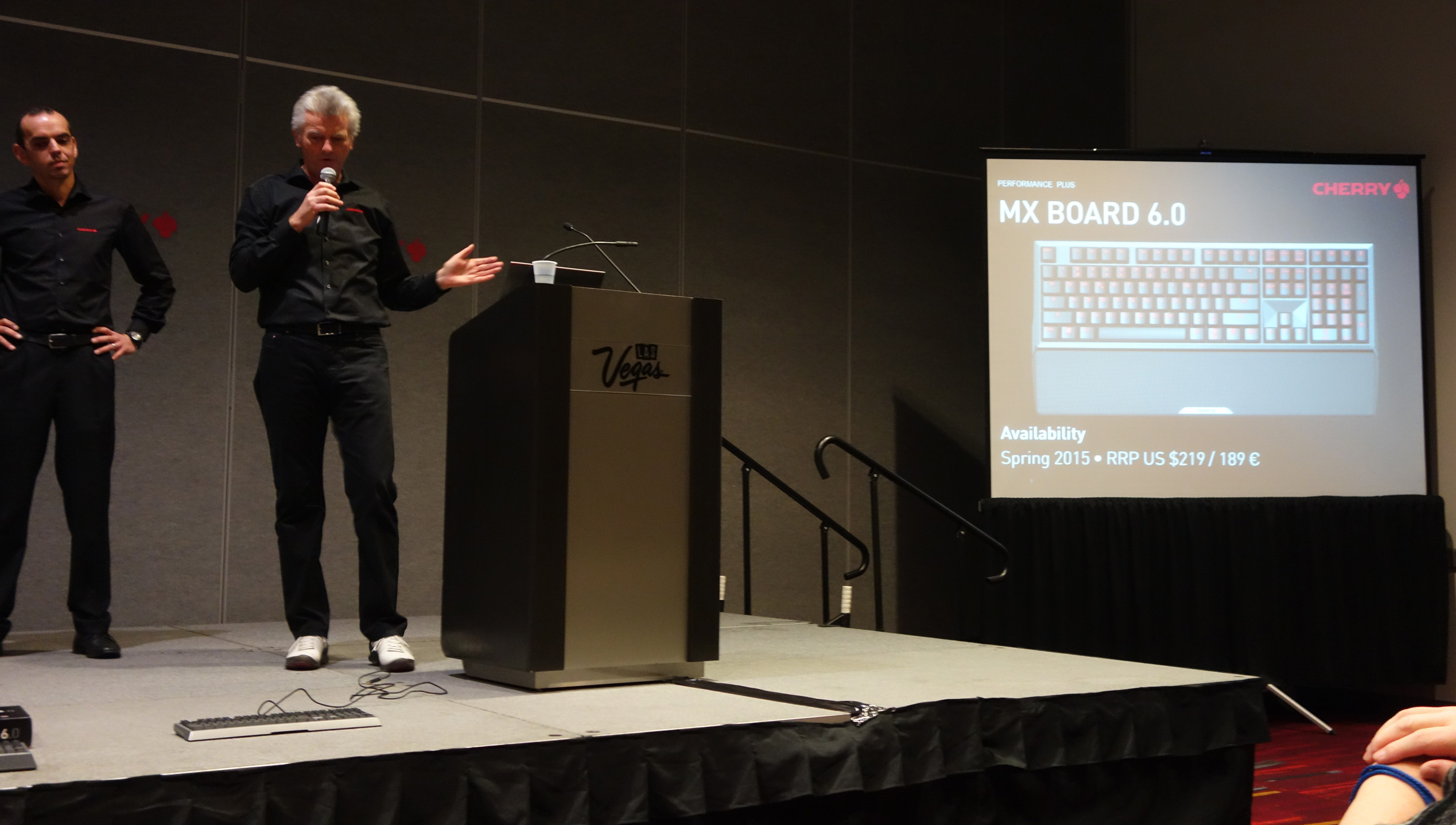 For those that have already selected the Cherry MX 3.0 as their keyboard choice for life, but are wondering about the new MX switches and RK, the question becomes, how long until Cherry brings the new switches over and produces a MX 3.1? 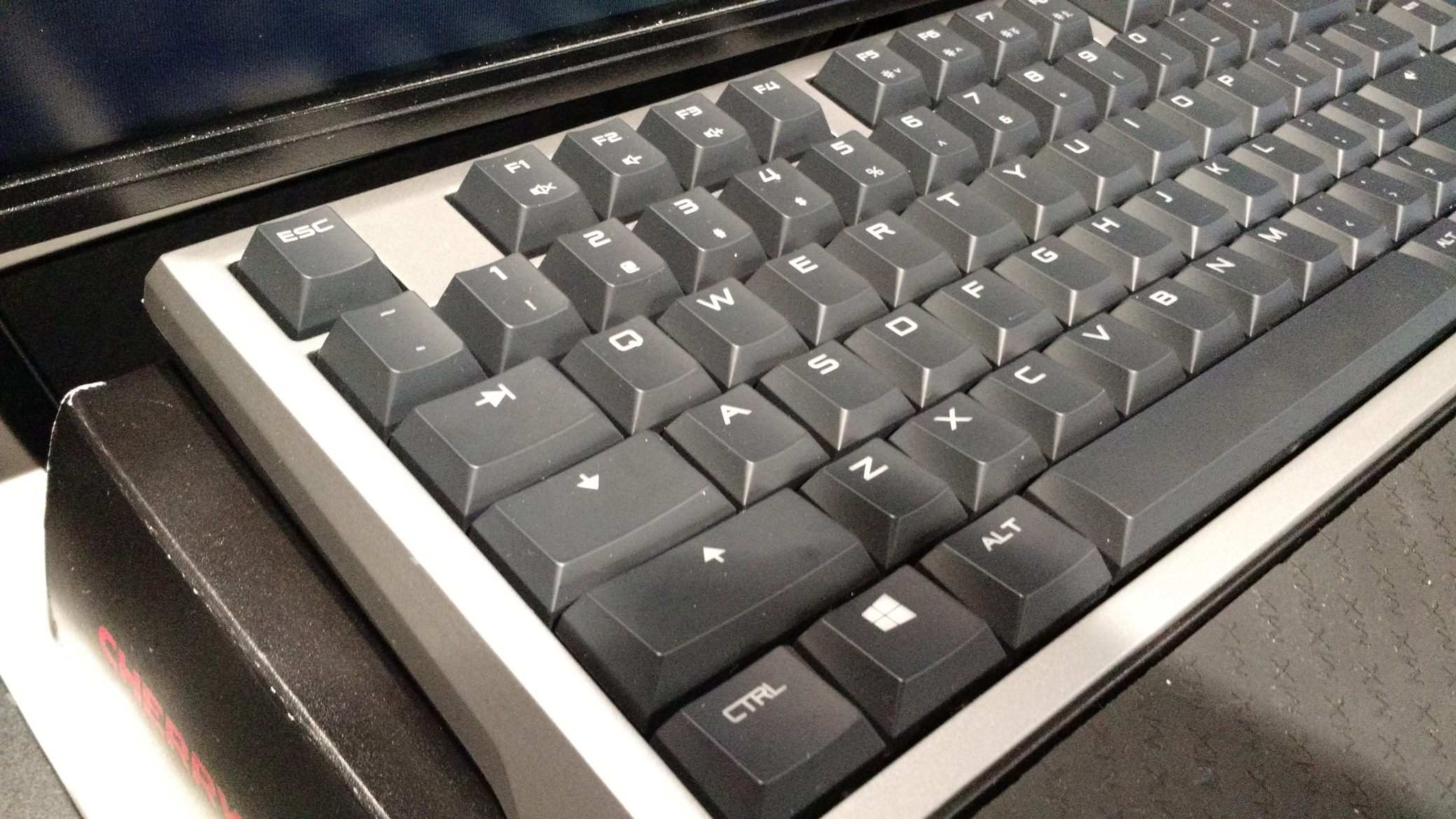 That answer may be sooner rather than later. A MX Board 3.1 with RK could see the market before Cherry lets anyone like Corsair make use of the new switches. That could easily be 1-2 years, which is also a reasonable timetable before the new switches become an RGB like product, available in a rainbow of colors and resistances. For now, the new switches bear the company's signature Cherry red at 45 cN. 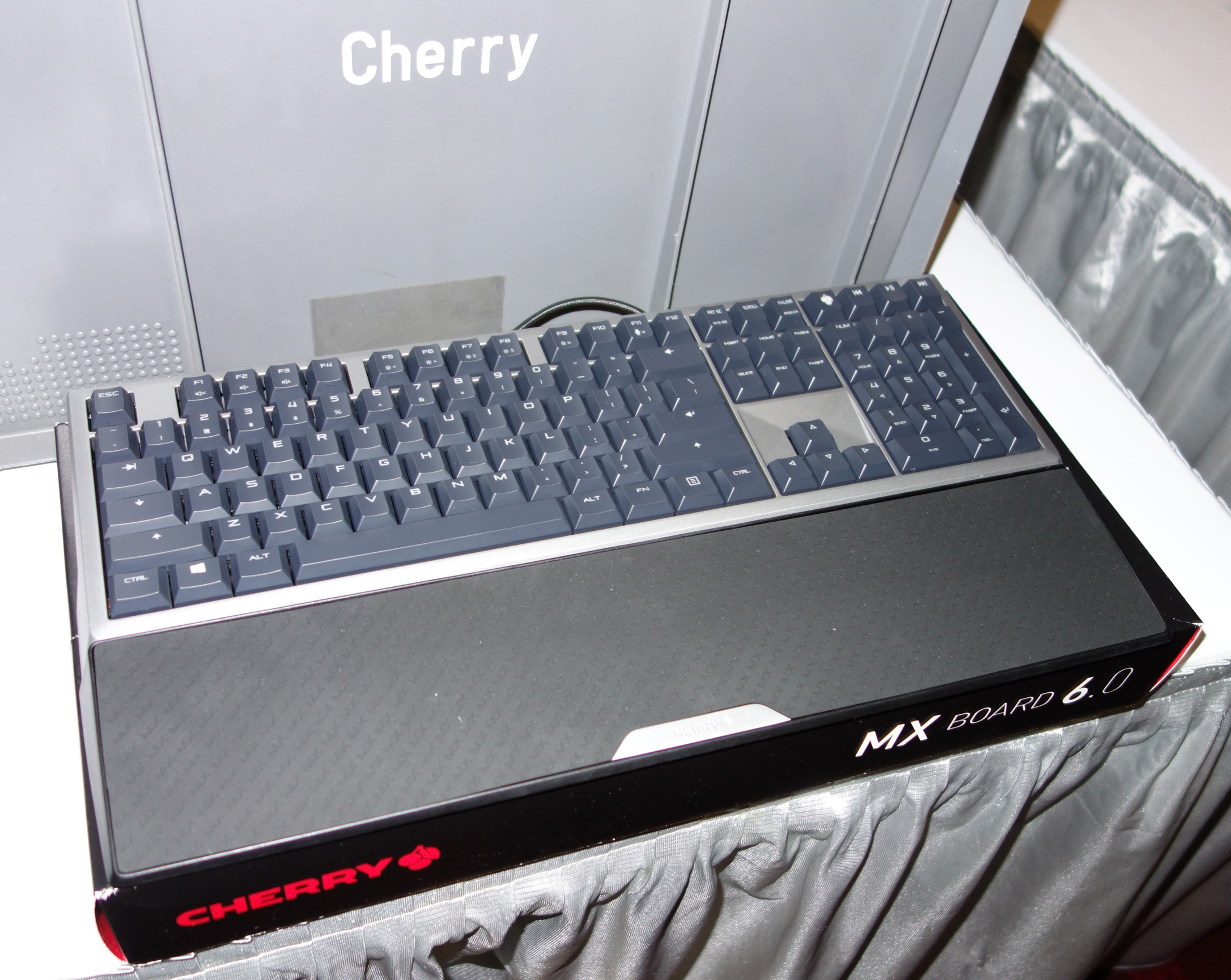 I was able to get hands on with the Cherry MX 6.0 at CES, and true to its heritage, it feels highly engineered. There is a slick satisfaction to each keystroke that is miles away from the typical membrane experience and even the old-school clackity, binary IBM style. The closest thing that comes to mind are piano keys. The rest of the keyboard's cosmetic and ergonomic features are easy to recognize and appreciate. Aside from the backlighting and overall color, the design is very no-nonsense. Cherry is targeting entire studios of programmers, and not the everyday gamer. This is good, since the precision, reliability, and usability standards that are being targeted (which are above the classic high marks of the 3.0) will serve just as well for gaming as they do in more professional settings. Cherry did deem it wise to add in a Windows key deactivation as well as a braided 2M cable, so perhaps there was some consideration given to gaming after all (make no mistake, gaming was never a forgotten application). 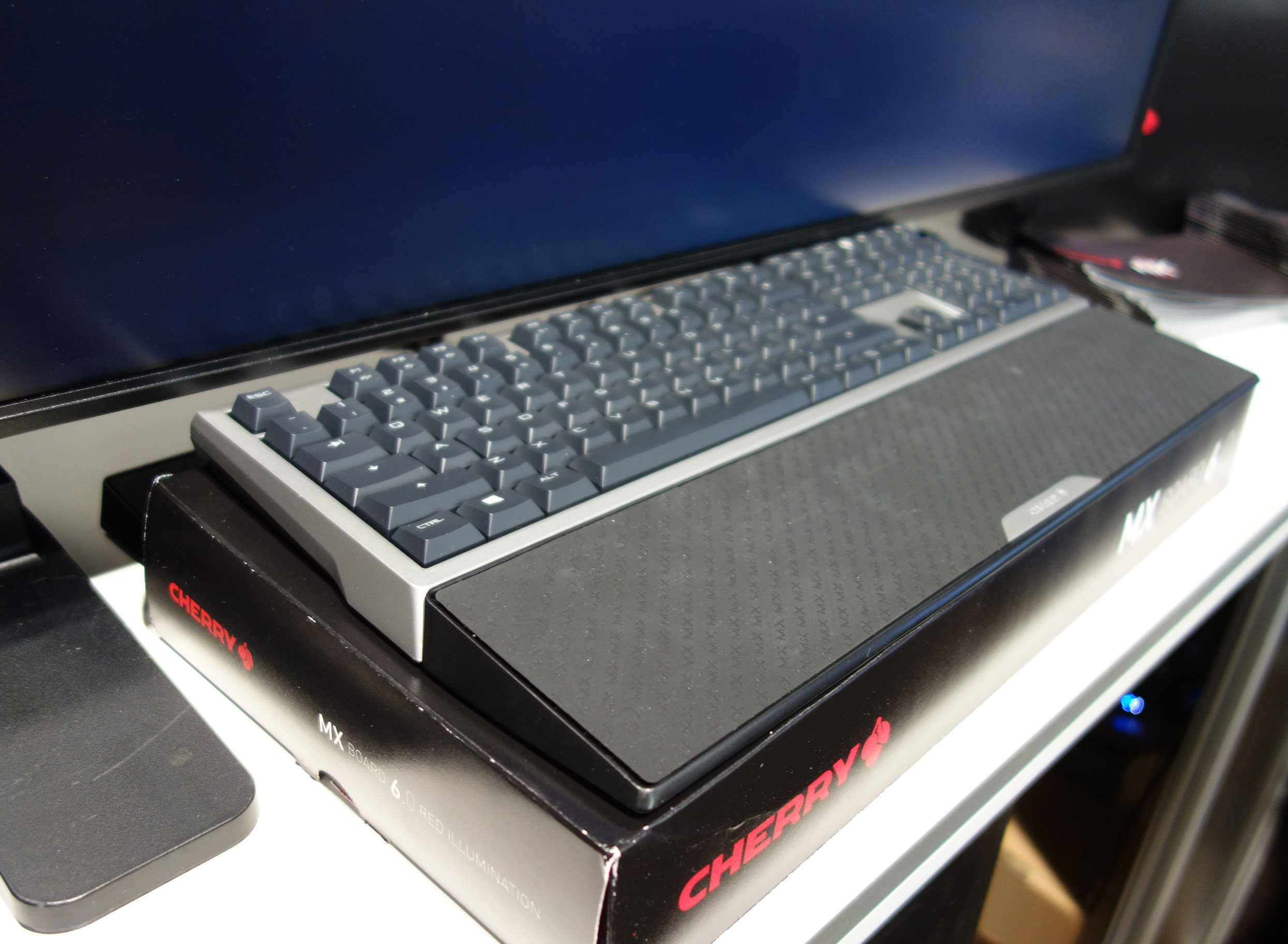 As nice as it was to get to use the keyboard at CES, I'm looking forward to its debut and to take it on a much longer tour of duty. There's something special at stake when using it as it appears to be a product that is at home at an executive's desk, or with a code monkey, or in the backpack on the tournament circuit that makes the MX 6.0 jump to the top of tech junkie's wish list. Of those that pour hours every day into a keyboard, I can't imagine anyone not wanting to get hold of a Cherry MX Board 6.0.