Get Ready for the Monsters of 'Dragon Quest Heroes: The World Tree's Woe and the Blight Below' to Thrash Your PS4

Take a breath and consider 'Dragon Quest Heroes: The World Tree's Woe and the Blight Below.' With its long name and its 'Dragon Quest' roots' long history, the whole package might seem intimidating. The key though, is that this looks to be the best way to become introduced into the special world of 'Dragon Quest' and the monsters within. With a real time combat system that has been lauded in previews as the next coming of a certain popular third person fighting series, this PS4-bound game is poised to meld RPG and action genres into something worthy of 'The Witcher 3.'

Look, these monsters of all shapes and sizes won't take themselves down. This is a party not to be missed.

Preorders for 'Dragon Quest Heroes: The World Tree's Woe and the Blight Below' will nab the Day One Edition, which includes "exclusive in-game Slime weapons for the legendary DRAGON QUEST heroes, including the Slime Sword, Gooey Gloves, Goomerang, Squishing Rod, and Gungenir." (Order here.)

You can find the latest info on 'Dragon Quest Heroes: The World Tree's Woe and the Blight Below' linked from our Video Game Release Schedule. 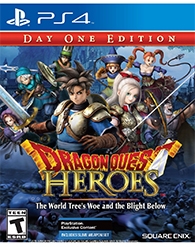