The Bat's Out Of The Bag: First True Look At 'Yooka-Laylee'

After a hugely successful Kickstarter for 'Banjo-Kazooie' successor 'Yooka-Laylee', Playtonic, the development collective predominantly composed of Rare Ltd. expats, went radio silent until the game was, in their words, "representative of the final target we’re shooting for." Well, that day has come, and Platonic has not just released a bunch of new screenshots of the game, but the first hard details about gameplay, story, and the Toybox demo Kickstarter backers were promised.

That story is this: "Yooka and Laylee’s adventure will take them deep inside the work halls of a baneful business, as the buddy-duo seek out the magical Pagies required to explore the mysterious Grand Tomes. The dexterous pair will seek to unlock the ancient secrets of these bewitching books, as they battle to thwart corporate creep Capital B and his devious scheme to absorb all of the world’s literature… and convert them into pure profit." 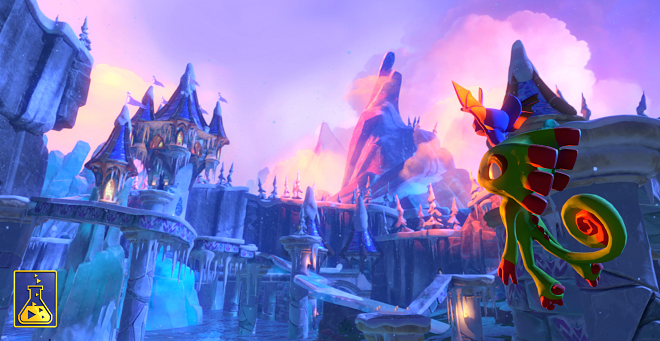 The blog post also revealed two of the wacky NPC characters along the way, Dr. Quack, a duck in an exo-suit, and Dr. Puzz, an octopus. Who's a doctor. Gross. The latter is, however, responsible for a transformation mechanic that Playtonic will be revealing in the coming weeks.

Speaking of, the blog post represents a rollout of new info leading all the way into the summer, including a spread in the new Edge Magazine on the 26th, reports from various outlets who've put eyes on the game already, E3, of course, and the release of the Toybox demo, which, according to Playtonic, has "expanded beyond the web-based, single-room play thing we originally planned and it’s now a much more significant chunk of playable content." Get ready folks, we're about to see a whole lot more of the game.

You can get way more info and screenshots right over here.

<p>You can find the latest info on 'Yooka-Laylee' linked from our <a href="https://games.highdefdigest.com/releasedates.html">Video Game Release Schedule</a>.</p>