The 'Jaws of Hakkon' tells the tale of the last Inquisitor and the dragon he hunted. Now that dragon has returned. Releasing tomorrow, March 24th.

'Dragon Age: Inquisition' has been a massive success, garnering all kinds of new fans for its open word RPG set-up (check out the review here.) Today, EA announced that an expansion called 'Dragon Age: Inquisition - Jaws of Hakkon' is coming and coming very soon. (Tomorrow in fact.) The expansion will be featured on the Xbox One and PC first, before coming to other platforms. 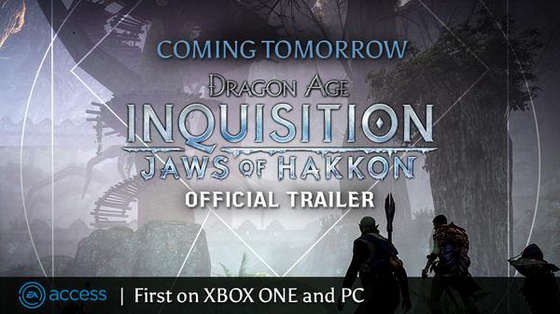 Expect more info over the next day as EA ramps up excitement for more 'Dragon Age: Inquisition.' For now, it may be time to snatch up that EA Access membership.

One thing to note about past BioWare DLC offerings is that they usually occur during the game's main story, with only later DLC offerings (like the very last piece of single player DLC content) occuring after the main game's story. In this case players should expect a dalliance with the Avvars.

With 'Jaws of Hakkon' does arriving on the Xbox One and PC this week, (the same week as 'Bloodborne') the sudden timing ought to prove fortuitous for many fans.

From the High-Def Digest review of the original game:

"'Dragon Age: Inquisition' vies with 'Diablo' for the spot of best RPG currently available on the Xbox One. It avoids the grind endemic to games of its kind and has a good story on top of an even better open world."