A reversal two years after the fact.

Today, Atlus made an announcement, which while not ground-shaking on its face, is a kind of admission of prior guilt. The upcoming 'Persona 4 Arena Ultimax' for the PS3 and 360 will not be region locked.

Many fans may be puzzled by this announcement. After all, PS3 games are hardly ever region locked, and PS3 discs can be played in PS3 systems the world over. Two years ago, however, one of the few ever region locked games was released, and that was 'Persona 4 Arena.' Region restrictions are an option left up to the publisher, and Atlus elected to region lock the game, in spite of the close proximity between Japan and North American release dates. Atlus, it seemed, was quite concerned about importers the world over making the most out of currency and region pricing variance. The side effect though was that PS3 'Persona 4 Arena' buyers then had to be concerned over being sure to match the right region copy with the right system, and European PS3 owners were just left out in the cold until the European release almost a year later.

Those who dislike region schemes can look at the Atlus reversal with a certain degree of encouragement.

From Atlus, "Persona 4 Arena Ultimax, the upcoming fighting game from ATLUS will not be region locked for the Americas and will be available this fall for the PlayStation 3 and Xbox 360; pre-orders and all first-run editions will include a collectible Teddie bop bag and Set #1 of the iconic Persona Tarot cards. (Set #2 will be included with Persona Q: Shadow of the Labyrinth.) This follows the recent announcement that playable DLC character Tohru Adachi will be offered for free the first week after the game's launch."

You can find the latest info on 'Persona 4 Arena Ultimax' linked from our Video Game Release Schedule. 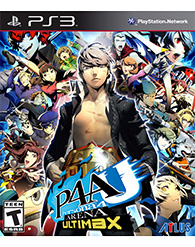