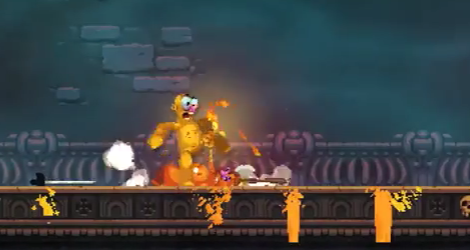 Playable at Day of the Devs.

The follow-up to Mark Essen's hit fencing game 'Nidhogg' is making its way to PlayStation 4.The developer announced today that 'Nidhogg 2' will launch on Sony's console in 2017. The sequel, which will feature "new moves and weapons," was already confirmed for PC and Mac.

Another major change that fans will notice is the game's drastically different art style. The minimalistic style of the original is gone, as it now features artwork and animations by artist Toby Dixon. 'Nidhogg 2' will also feature a soundtrack filled with music by artists such as Mux Mool, Dose One, and Daedelus. Essen has said that addtional collaborators will be announced "as the project progresses."

Those that are going to the Day of the Devs this Saturday (November 5th) can go hands-on with 'Nidhogg 2.' It'll be playable at booth #30, and from 6 to 6:30 p.m. a new level will be shown on the main stage