Surprise! 'Evolve' Has One Heck of a Story & It Sets Up the Game's Evacuation Mode Nicely

"This is no longer a wildlife problem, it's a full-scale evacuation."

After multiple 'Evolve' demonstrations and playtests, the game has looked like many things, such as a slick, competitive asymmetrical hunt-or-be-hunted versus title. Until now, however, it hasn't seemed a game with much story beyond a few bits of chatter between the hunters. That changes today. 2K Games and Turtle Rock have announced a full array of game modes that play into this new story.

First off, there is this newly revealed story, which sees "the greatest team of hunters ever assembled" fighting to help evacuate a decimated, planet size colony.

Then, there are the new individual, game modes, Nest, Rescue, and Defend, which exist alongside the Hunt mode that players have been familiar with for some time.

Here is a breakdown of the four modes:

It’s a race for the Monster to eat enough within the environment to evolve to stage 3, and find the power relay on the map to destroy the objective. All along, the Hunters and Monster play cat-and-mouse, hoping to kill for a quick victory.

After that first victory, players continue the fight to one of two adjoining territories, voting on location and mode. In addition to Hunt, the modes that can be up for selection are:

This mode was revealed on IGN last week. Nest mode has the Monster player protecting its brood, randomly scattered all over the map, while the Hunters are out to scramble some alien eggs. If the Monster is able to get to the eggs, it has the option to hatch one of them into a minion – a stage 1 Goliath that runs around, aggro-ing Hunters. Hunters win by destroying all the eggs and the minion, or killing the Monster.

Injured colonists trying to escape the Monsters are placed randomly on the map. Hunters need to locate, revive and protect them as they make their escape. Monsters need to munch on as many of these colonists as possible and keep them from getting away. Whoever saves – or kills – the majority of the colonists, wins.

This is it – the last stand. Winner takes all. If you’re playing from the Hunter perspective, you’re desperately defending the Evacuation point while the ship is fueling up to escape. As a Monster, you’re leading hordes of Goliath minions as you attack the Evacuation point in waves. Will the Monsters break through and destroy everything? Or will the colonists get away in time?

What's left then, is Evacuation, which combines all of the game's modes, hunters, and monsters in one dynamic struggle.

While it isn’t a campaign in the classic sense, there is a story to tell: The planet Shear is getting overrun by Monsters. Within five days, the battle for Shear will be won or lost depending on the actions of four Hunters…and, of course, one mutating Monster. Those five days are broken up into five rounds as you fight your way across the planet. The first round is always Hunt, on a randomly chosen map.

Evacuation is being described as having “800,000 variables.

Every time that you win a match, there is a campaign affect applied to the next map you choose. So, as one example, the Dam is saved and the Hunters win for that day. As a result, the workers are able to power up Perimeter Fences, which cut neighboring maps into half sized portions, creating an interesting advantage for the Hunters. That’s just one possible game-changing outcome from one map.

If you want to go with a picture being worth a thousand words, we put together a quick map of Shear and an example of how just one round of Evacuation could go. 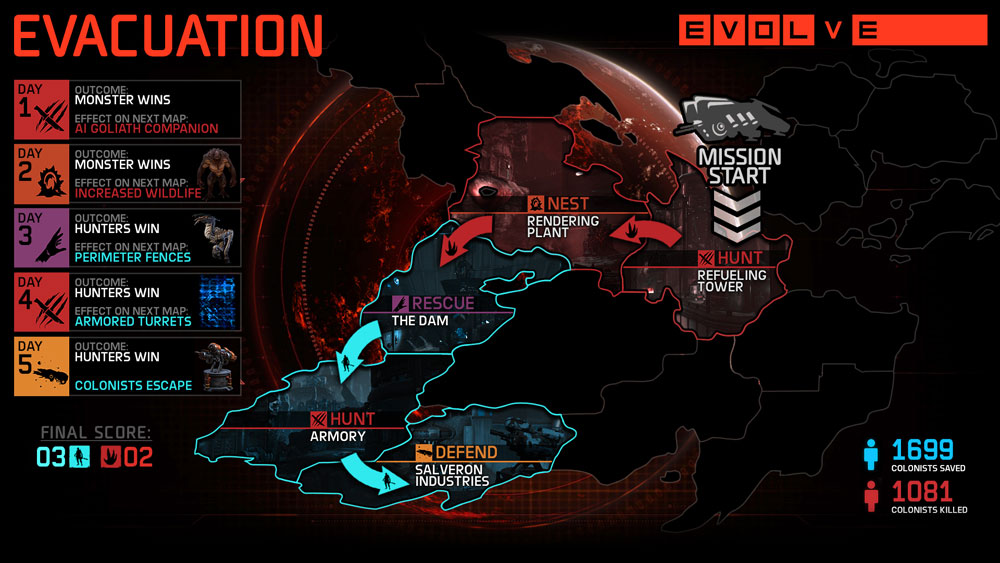 2K Games has promised that Evacuation mode will be playable in the upcoming Xbox One open beta, which is set for January.