'Natural Doctrine' States Its Case: Tactical Strategy Can Thrive On the PS4

NIS America has shared another look at the gameplay of Kadokawa Game Studio's 'Natural Doctrine.' The cross-platform hardcore tactical strategy title traces its pedigree through the likes of 'Final Fantasy XII' and 'Final Fantasy Tactics Advance,' but looks to crank up the challenge to 'Dark Souls' like levels. The new trailer is filled with preview quotes, battle moves, and of course, plenty of game over screens.

The game is now set for a September 16th release on all three PlayStation platforms and supports both cross-save and cross-play, which means that multiplayer battling can occur between players regardless of platform.

With a party of characters, character skill sets and items to manage, the game's strategy begins long before each battle.

You can find the latest info on 'Natural Doctrine' linked from our Video Game Release Schedule. 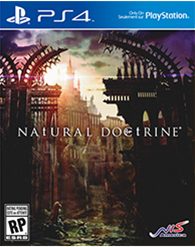