You might have noticed a rather chunky 5GB patch taking its sweet time downloading this week for 'Mortal Kombat X', and for some of you at the worst possible moment, considering you probably had to download the 3GB day one patch for 'Arkham Knight' at the same time. Well, there's a reason for the giant chunk of real estate.

For starters, the patch includes three new Stage Brutalities, which you can check out here, here, and here. All of which carry a recurring theme of doing terrible things to your opponent's head, one of which I'd like to officially dub "The Gallagher".

That's all well and good, but surely, that's not worth 5 gigs of your valuable hard drive. This, however, is: 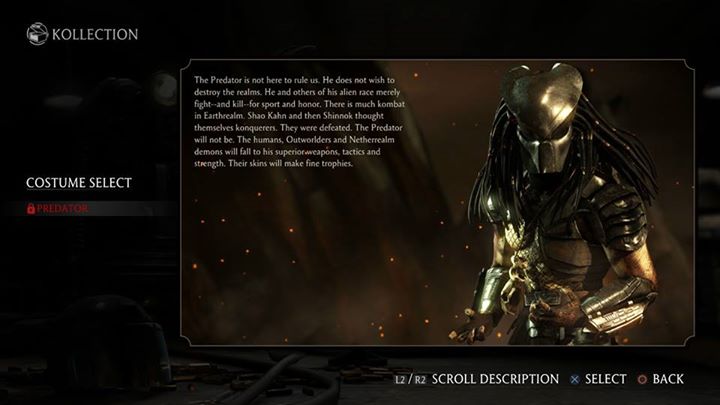 The time is apparently nigh for the Predator to join the 'MKX' roster, and as user LaidbackOne has shown on the Test Your Might forums, the entire pack might already be included in the patch since there's already a character pic for the promised Carl Weathers skin for Jax, as well as two nifty little surprises: A Scorpion skin in Predatorvision, and a Dutch costume for Johnny Cage. Yes, 'Predator' Dutch, not Pennsylvania Dutch. You can check those out in the original post here.

No date's been set for when the goods will unlock, though apparently the Stage Brutalities work right now. if the past packs are any indication, we should be getting a snazzy trailer showing off gameplay any day now.