Update: Both PS4 & Xbox One appear to now have stable links. It's nearly an 8GB download, so the sooner users can get started the better.

The 'Star Wars: Battlefront' beta is live on the PS4, Xbox One, and PC, and we've got soem download links. Unfortunately, as of this writing, the console download pages are in shambles while the PC, the only platform that supported preloading is up.

Here are the links. Again, these are under heavy traffic and may not work for some time.

Alternate page for all platforms 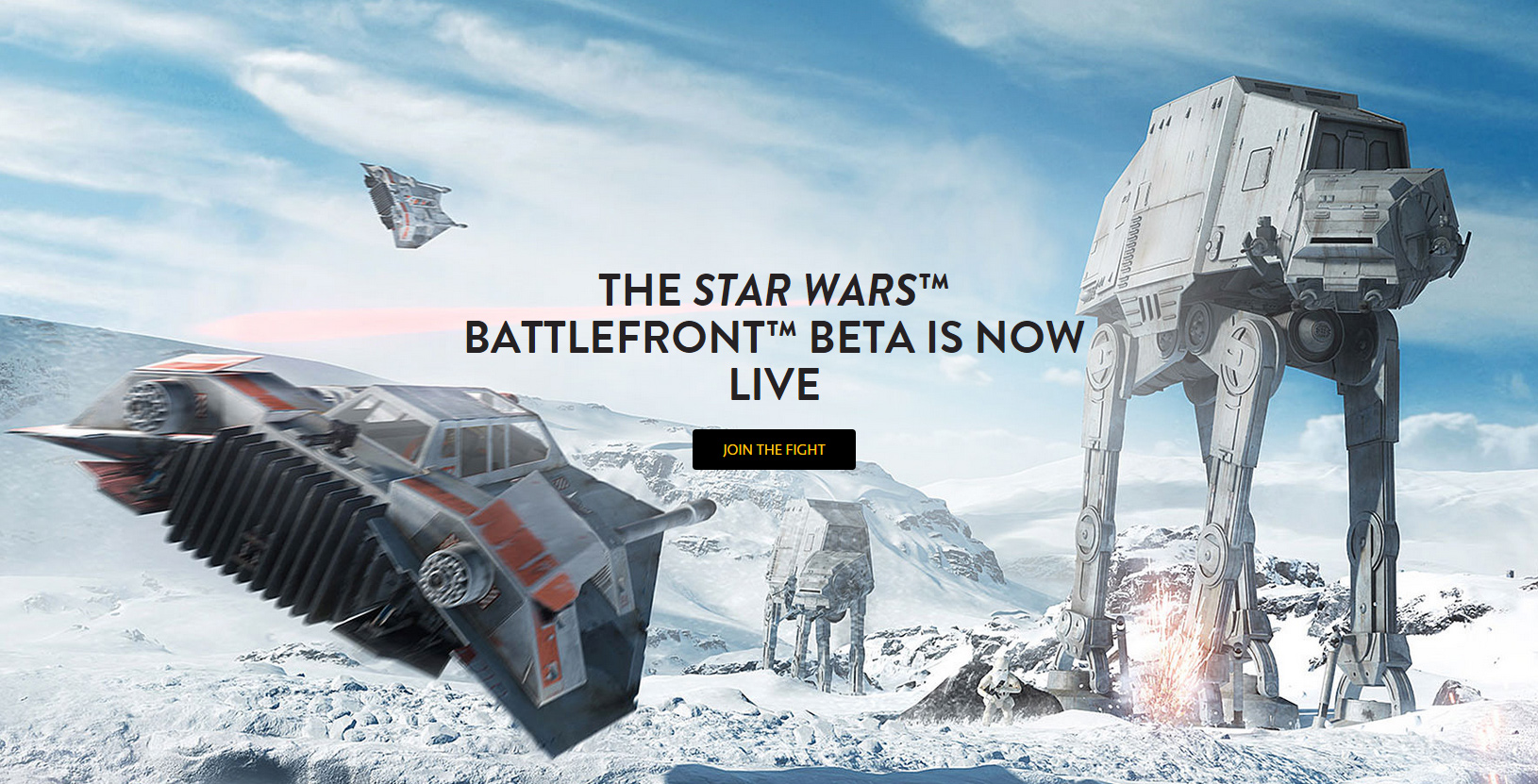 For those who feel up to using a UK PSN account (which is free and easy), here's the UK PSN link, which is working: 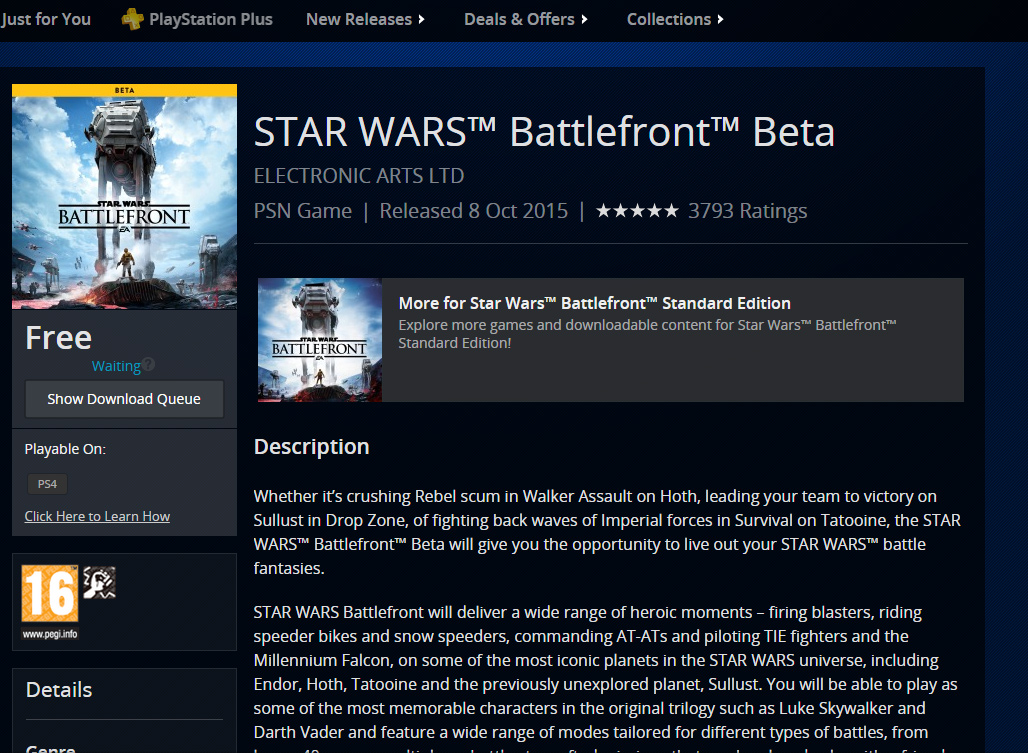 Here's the breakdown of what's on offer in the beta:

Walker Assault on Hoth: Fight in epic 40-player battles as a Rebel to destroy the Empire’s onslaught of AT-AT’s by calling in Y-wing bombers. Or, side with the Empire and protect your walkers while utilizing their mighty weaponry to crush the Rebel objective.

Drop Zone on Sullust: Escape pods are crashing down and you and your team must fight to control them. With its frantic 8v8 matches, Drop Zone is sure to put your combat and strategy skills to the test.

Survival Mission on Tatooine: Play alone or with a friend via co-op or split-screen as you battle to hold off waves of Imperial forces including AT-ST’s, TIE fighters, elite stormtroopers, and more.

Walker Assault supports up to 40 players, 20 per side, with Drop Zone supporting 16. The Survival Mission can be played by yourself or with a friend via online co-op or local split-screen. Local split-screen is available on PlayStation 4 and Xbox One only.

There will be hero units. Both Darth Vader and Luke Skywalker will be playable in Walker Assault. To play as these iconic and powerful characters, players will need to locate hero power-ups.

Six vehicles will be playable in the beta, including a X-wing, A-wing, TIE fighter, TIE Interceptor, AT-ST and a Snowspeeder.

Rebels will start out with the A280C blaster and can unlock the DH-17, DLT-19, and E-11, as well as some others that are meant to be surprising (in the beta, plus more in the full game. Empire troops have the same weapon access but the starting weapon is the E-11.

The beta will have a level cap at level five, but players can continue to unlock items. That progress will not carry over to the full release. The beta will be 7GB on PS4 & Xbox One, and 11GB on PC.

The beta will go live (and will end) at different times in different regions. Those times will be posted here.

The beta will be downloadable from the PlayStation Store, Xbox Live Marketplace, and in Origin (under the Demo & Beta sections). Players do not need to register. The PC version will support preloading. (Find it here on October 7th at 1am PT)

The Survival Mission on Tatooine will support two-player split screen on the PS4.

EA does want players to try out the Star Wars Battlefront Companion app, which will be available to download here and available in-browser here.

Tips and Tricks for playing the beta sections have been posted:

What are some strategies for each mode?

Strategies can vary depending on how you like to play, but here are a few pointers that can give you an edge in your early matches.

Stick to the high ground and keep your distance from the waves of enemies — allowing them to get close can spell certain death. Capture the Drop Pod before and during wave three and utilize your power-ups to dominate the Imperial forces. Also, not all waves are just your typical Stormtroopers, so gear up to take on those pesky AT-ST walkers.

In this mode you have a lot of options in play style thanks to the layout on Sullust. Keeping your distance is great if you’re using the cycle rifle, but this limits your ability to play the objective.

Getting up high with a jetpack can play to your advantage against Stormtroopers or Rebels running into the deep valley paths, but note that you can easily become blaster fodder if you’re not aware of your surroundings. Finally, you can play like me and run ‘n’ gun and focus on clearing out the Drop Pod areas and holding the objective.

This mode is by far the most complex in the Beta, with moving objectives, massive areas for battle, and keeping aerial assaults in mind — you’re going to be challenged in every way possible.

Securing anti-vehicle rocket launchers and well-placed Ion grenades will be your go-to in the Beta. But focus those AT-AT walkers when they’re vulnerable and you should be able to hold back the Empire.

Snowspeeders are by far the most efficient way to take down AT-AT walkers. Master the Tow Cable takedown and watch the Imperials fall. But watch out for those Imperial fighters as they can quickly blow you out of the sky.

From the Imperial perspective: Assaulting the Rebel base from all angles is important. Stopping the Rebels from securing uplinks and protecting your AT-AT walkers are your top objectives.

Utilizing vehicle power-ups and securing the high ground across the map can help give you an advantage. If the Rebels can control the uplinks, get ready to take to the sky and defend your AT-AT walkers from X-wings, A-wings, and those pesky Snowspeeders.

To sum it up: attack and defend the uplinks, protect your AT-AT walkers, and destroy the Rebel scum!

Special note: Securing hero power-ups can help turn the tide of battle, so watch your back as Luke Skywalker and Darth Vader take to the battlefront.