Rumor: 'Destiny' to Get $40 'The Taken King' Expansion This September

Could it be a re-launch?

Once September 2015 rolls around, 'Destiny' will officially be one year old. Activision and Bungie are expected to show and talk about what's next for the twice expanded online shooter at E3, but Kotaku is citing some unseen, leaked marketing material in route to describing a bigger expansion for 'Destiny' than either of the two previous expansions combined.

It's worth pointing out that the art that accompanies this published leak on Kotaku, is none other than the cover art from the recent 'House of Wolves' expansion. 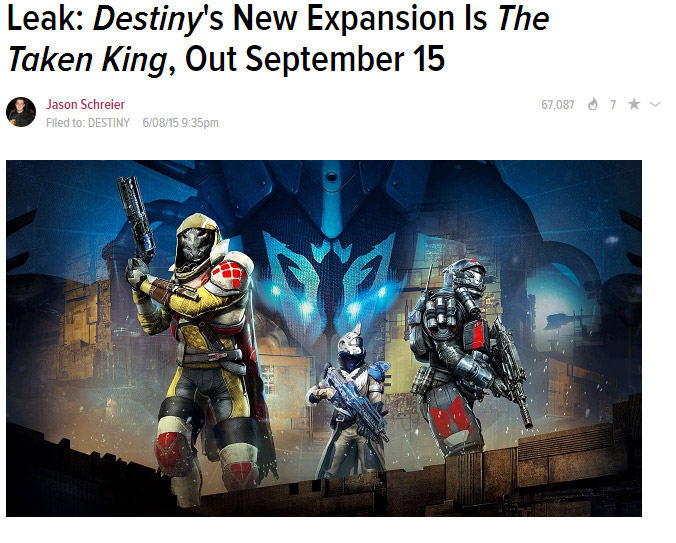 Still, the info shared in this reported leak is in line with prior 'Destiny' leaks, though it was formerly known under the codename 'Comet.'

Dubbed 'The Taken King,' the expansion is described as being priced at $40, adds a new subclass to the three existing classes (which would make for nine subclasses total), and features new strikes, missions, and a new raid. The release date is described as September 15th, which is nearly one year since the game originally dropped. Sadly, other potential details, like the addition of a new planet, are absent from this Kotaku reported leak.

No doubt, Bungie and Activision will continue to weigh their official unveiling (as well as the actual unsettled content details) against the feedback generated this week.