Into the Depths of Weirdness - Early Access Impressions of 'Torment: Tides of Numenera'

In 1999, Black Isle Studios released 'Planescape: Torment' on PC to rave reviews. Unlike many RPGs being released at that time, it wasn’t set in a high fantasy world of dragons and elves. It made use of one of the more obscure 'Dungeons & Dragons' campaign settings called 'Planescape', which was set in a torus-shaped city at the center of a vast web of many planes of existence. Instead of saving the world, the player character of 'Planescape: Torment', the Nameless One, was far more interested in learning why he could not die. The game joined a list of classics built with BioWare’s Infinity Engine, which also inspired the recent 'Pillars of Eternity' by Obsidian.

InXile Entertainment is a studio founded by former Interplay employees who had been involved with the Infinity games during the 90s. They successfully funded a sequel to 1988’s 'Wasteland', and their current project is a spiritual successor to 'Planescape: Torment' called 'Torment: Tides of Numenera'. The game was funded through Kickstarter, where it became the crowdfunding platform’s first project to reach 1 million dollars, which it achieved in about seven hours. InXile couldn’t secure the 'Planescape' license from Wizards of the Coast, but they were able to buy the 'Torment' intellectual property. For the new setting they chose the futuristic Numenera tabletop game. Numenera is also a Kickstarter darling and was written by Monte Cook, who had worked on several 'Planescape' supplements in his time at TSR, the previous owners of 'Dungeons and Dragons'. 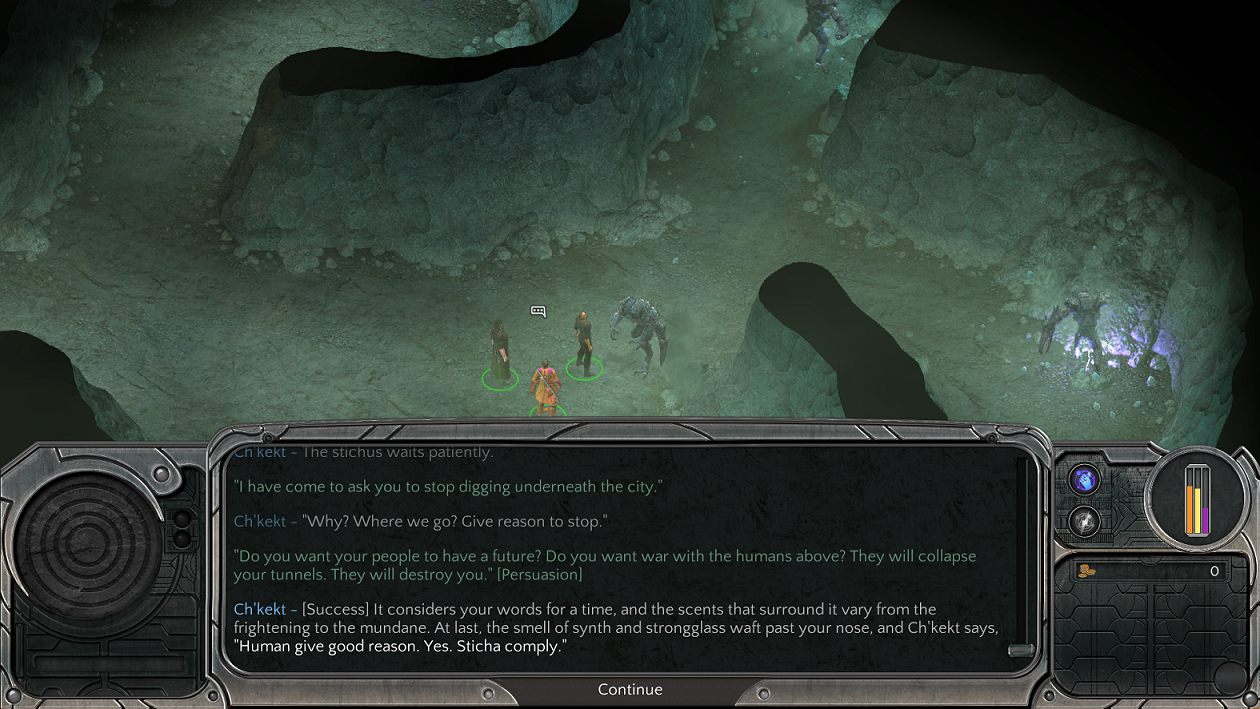 Now that 'Tides of Numenera' is in Early Access on Steam, we can take a look at how the game has been progressing since it was funded nearly three years ago. Before we get into the details, it’s important to note that this is a beta, and an early one at that. InXile claims that the game will be ready for full release later this year, but I am skeptical. The current build offers 6-8 hours of gameplay, depending on how fast you can read, and covers character creation through the first chapter of the game and the city of Sagus Cliffs. 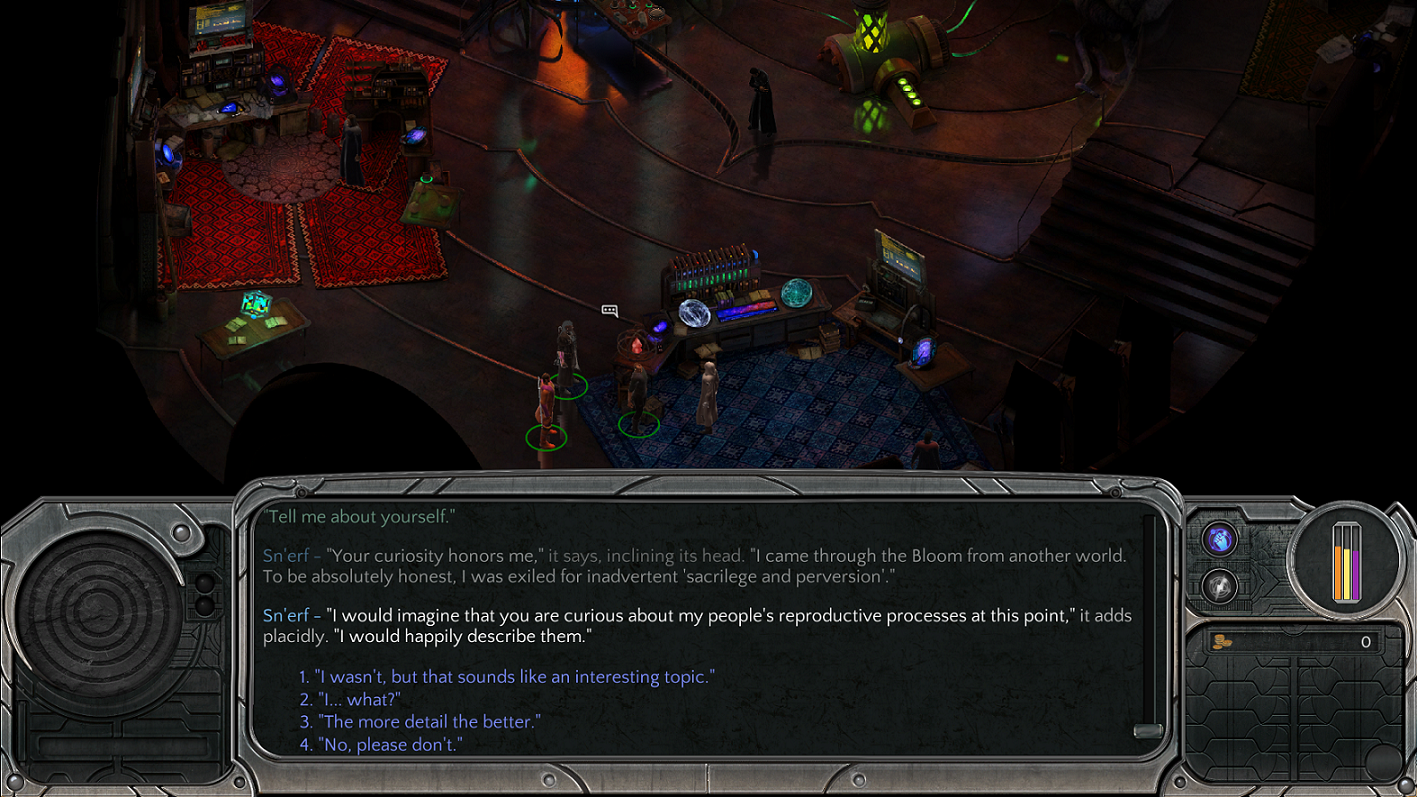 This is an unrepentantly weird game. The Numenera setting is very ambitious and very bizarre, being a billion years into the future where humanity has gone through so many civilizations that it can’t remember them all. They are called the Eight Worlds and they covered the Earth in innumerable gadgets, trinkets, and cybernetics, collectively referred to as numenera. The people of the current Ninth World are relatively primitive, but have incorporated scavenged numenera into their everyday lives, and it’s treated as a combination of science and magic.

In 'Tides of Numenera', the player character is known as the Last Castoff. The Castoff is the product of a shapeshifting deity, the Changing God, who cheats death every so often by creating a new body. However, when he vacates the old one, it doesn’t simply die - it creates a new consciousness from the menagerie of the God’s memories and experiences. There are many such castoffs roaming the Ninth World, and though their motives and abilities differ, they are all potent beings, respected and feared in their own right by the populace. The Last Castoff was just "born" and although he is an adult, he constantly struggles to remember his sire’s memories to help him escape the Shadow, a mysterious being that tirelessly hunts the God and the castoffs. 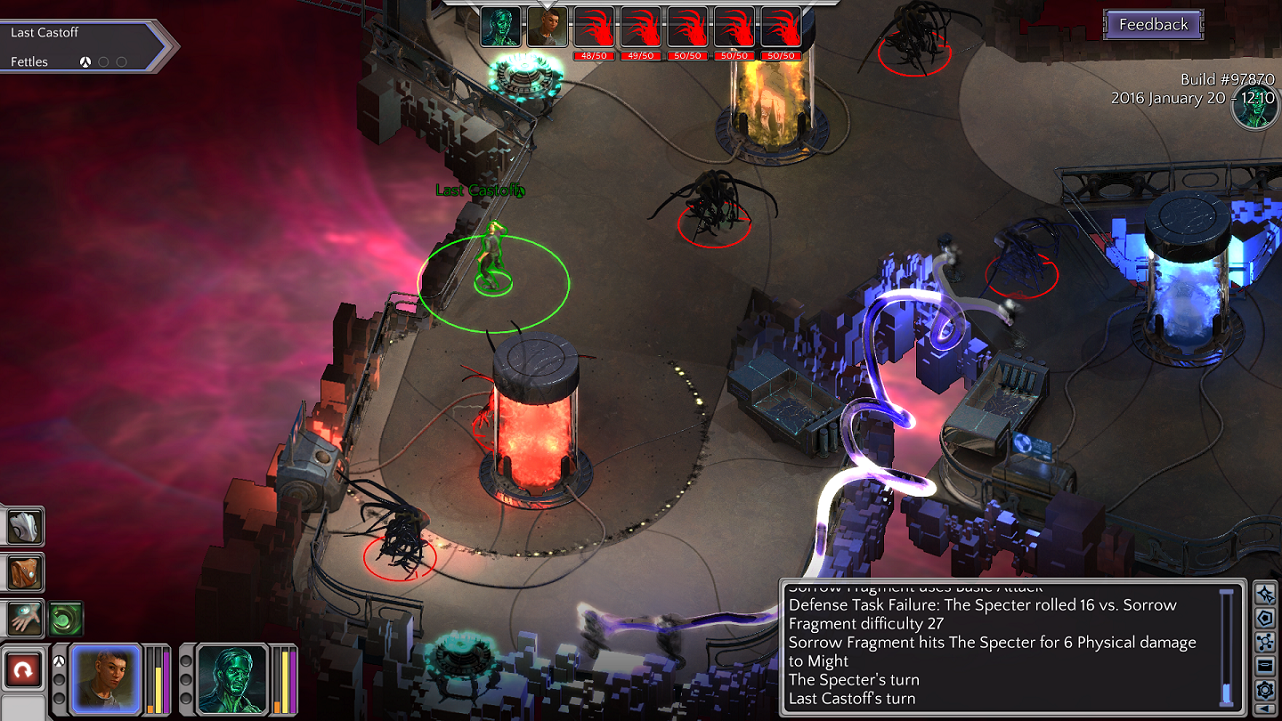 It’s a lot to take in, especially for someone unfamiliar with the Numenera setting. The game pulls no punches in introducing the Ninth World, and in all honesty I had trouble keeping up with the pace of the setting and how alien everything is. Still, even when I didn’t understand the concepts, I was quite happy to learn as much as possible about the numenera and all of the odd creatures who use them. An early questline tasked me with freeing a man facing his own execution. It sounds tame enough, but he was being slowly killed by his own life story, expressed as a rope of flesh slowly extruding from his mouth over the course of several days, which was being wrapped around him by a homunculus also formed of the same material. Should the execution not be stayed, he would eventually be strangled by the rope of flesh and his body would be liquified and consumed by a member of a cult that specializes in cannibalistic memory analysis. Like I said, it’s weird, but it’s also wondrous and fascinating. Also, not all of the quests are quite this gruesome. 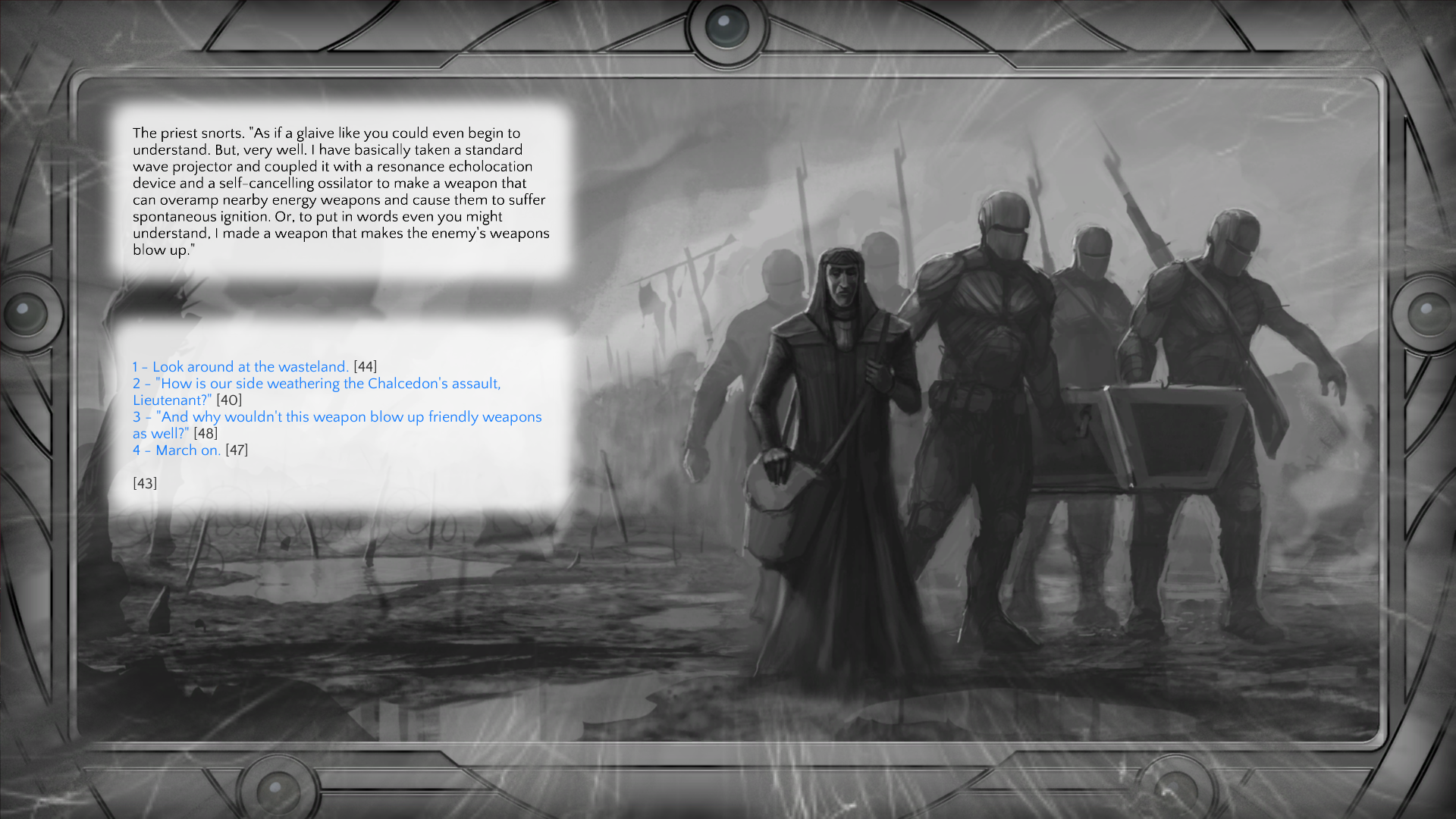 I had a rough time with combat in the beta, as the numerous bugs made it difficult to complete actions or move around the battlefield. Thankfully, many interactions can be resolved without violence. Instead of a traditional hitpoint system, health and abilities in 'Tides of Numenera' are governed by three ability pools: might, speed, and intellect. Interactions typically require one of these pools, and I could spend point on individual interactions to increase my chances of success. For instance, in Sagus’ Government Square I met a man who recognized my tattoo and knew that I was a castoff. I struggled to remember my previous experience with him, and spent a few points of intellect to make the die roll easier. I succeeded and was rewarded with a few experience points and the memory, which are very valuable as the Castoff knows next to nothing about himself.

These recollections pop up all the time in 'Tides of Numenera'. Some of them make sense and some do not, but all are important, as they provide clues to the gestalt memories of the Changing God. I wish there was a way the game recorded all of the collected memories into a single searchable database, but currently there’s just a simple, no-frills menu interface full of statistics and string code. 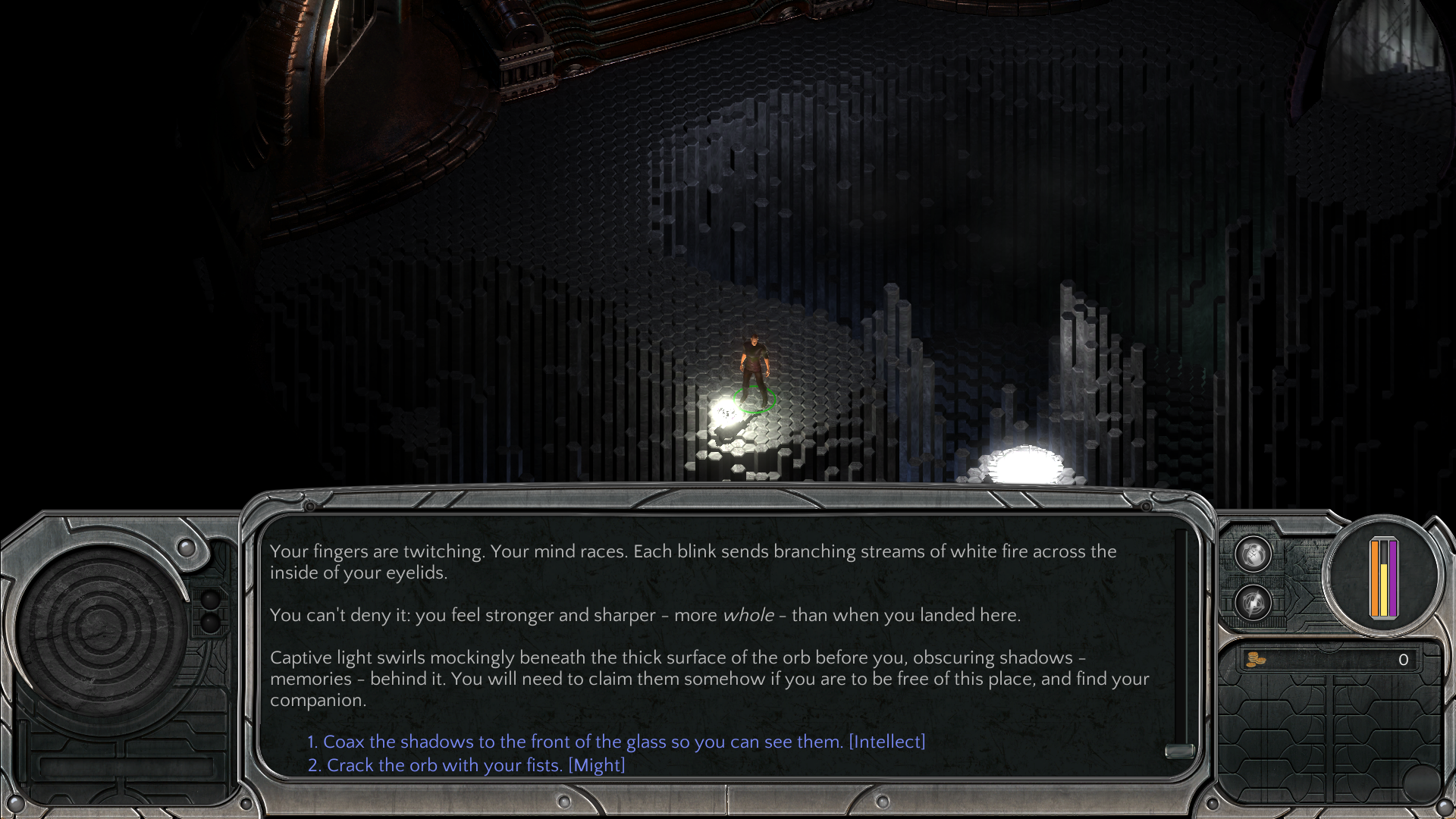 The game uses the Unity engine and probably won’t turn heads for its visuals, unless they change significantly before release (unlikely). Textures are fuzzy and animations are stiff. Still, the art design is rich in the lore of 'Numenera'. A billion years is a long time, and while humans haven’t changed much, the flora and fauna of the world are exotic and outlandish. They are joined by humanoid mutants and aliens, although the camera isn’t capable of zooming in close enough to get a good look at them. 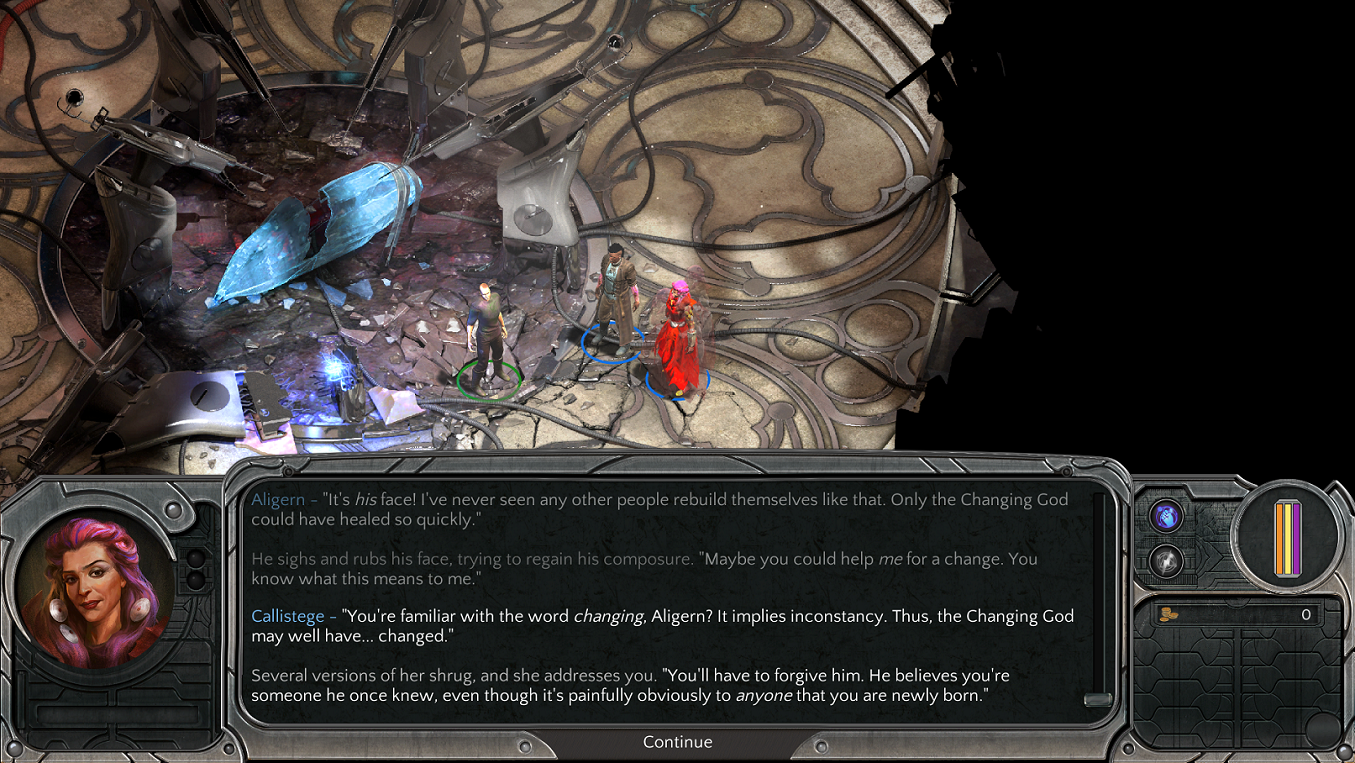 Despite all of the bugs and problems and lack of polish, 'Tides of Numenera' is promising. The nature of the Changing God and his castoffs remains inscrutable, as does the villainous Shadow, but this chapter features an incredible script and held my attention far longer than a lot of RPGs do. It’s no surprise, considering that several of the Kickstarter’s stretch goals included the hiring of guest writers like Pat Rothfuss, Chris Avellone, and Monte Cook himself. 'Tides of Numenera' has a long way to go before it’s ready for primetime, but so long as inXile continues to lean on their inspirations, they might just have a winner.