A Double Dose of H. Jon Benjamin Is Not the Best Part of Zen Studios' 'Balls of Glory Pinball'

Though it is entering the Danger Zone.

Next week, Zen Studios will release the 'Balls of the Glory Pinball' pack, which will contain four tables based off of hit animated properties. There is an 'Archer' table, an 'American Dad' table , a 'Family Guy' table, and last but certainly not least a 'Bob's Burgers' table.

I've been playing the new tables over the last day or so on the PS4, and I'm happy to say, these are a freaking awesome addition to the 'Zen Pinball 2'/'Pinball FX 2' line-up. And that's true no matter how selective the player's taste may be.

I'll get to each table in turn, but one of the main things to know is that unlike a lot of Zen Studios' recent efforts ('Deadpool' not withstanding), these tables are packed full of the actual voice over of the characters represented. Sure, it's all canned stuff lifted from the shows, but compared with the crummy Simpsons stuff in 'Lego Dimensions,' this is an all-around great effort, with just a few interesting oddities that mainly have to do with character emphasis. 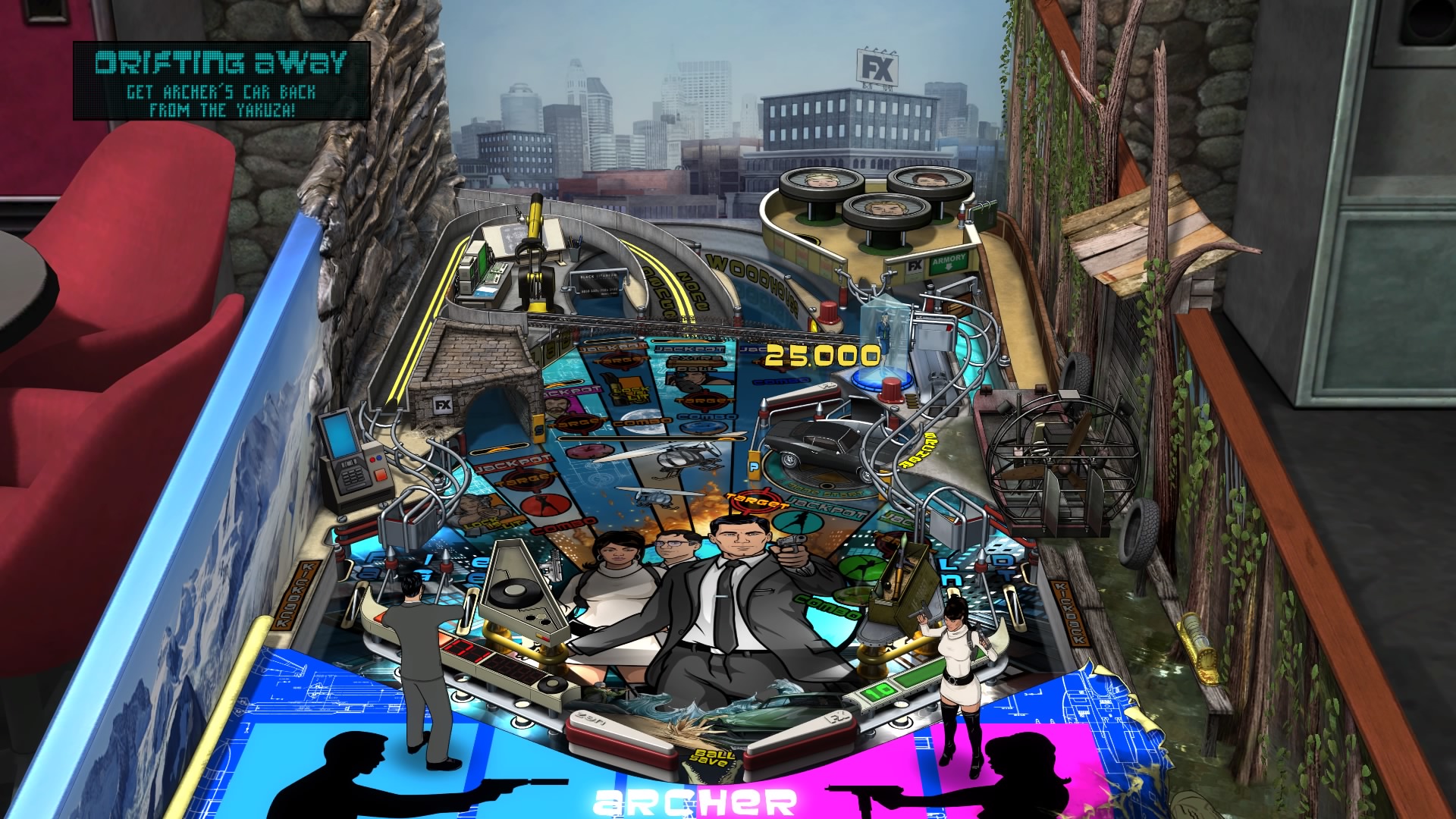 Also, I think it's fair to say that with this group of tables, while there are some pretty zany mechanics, ('Archer's Camaro' taking off with ball in the trunk for example), these tables remind me of classic real-life tables like 'The Simpsons' (with its extensive rails) and 'Back to the Future.'

Anyway, on to the individual tables. 'Archer' pinball is a definite possible stand-out. There are the fully animated Archer and Lana that walk around, there is the shifting backdrop that turns into Archer's realized dream of a chase/fight on top of a train, there is the full-on 'Gator' setting, the Camaro... 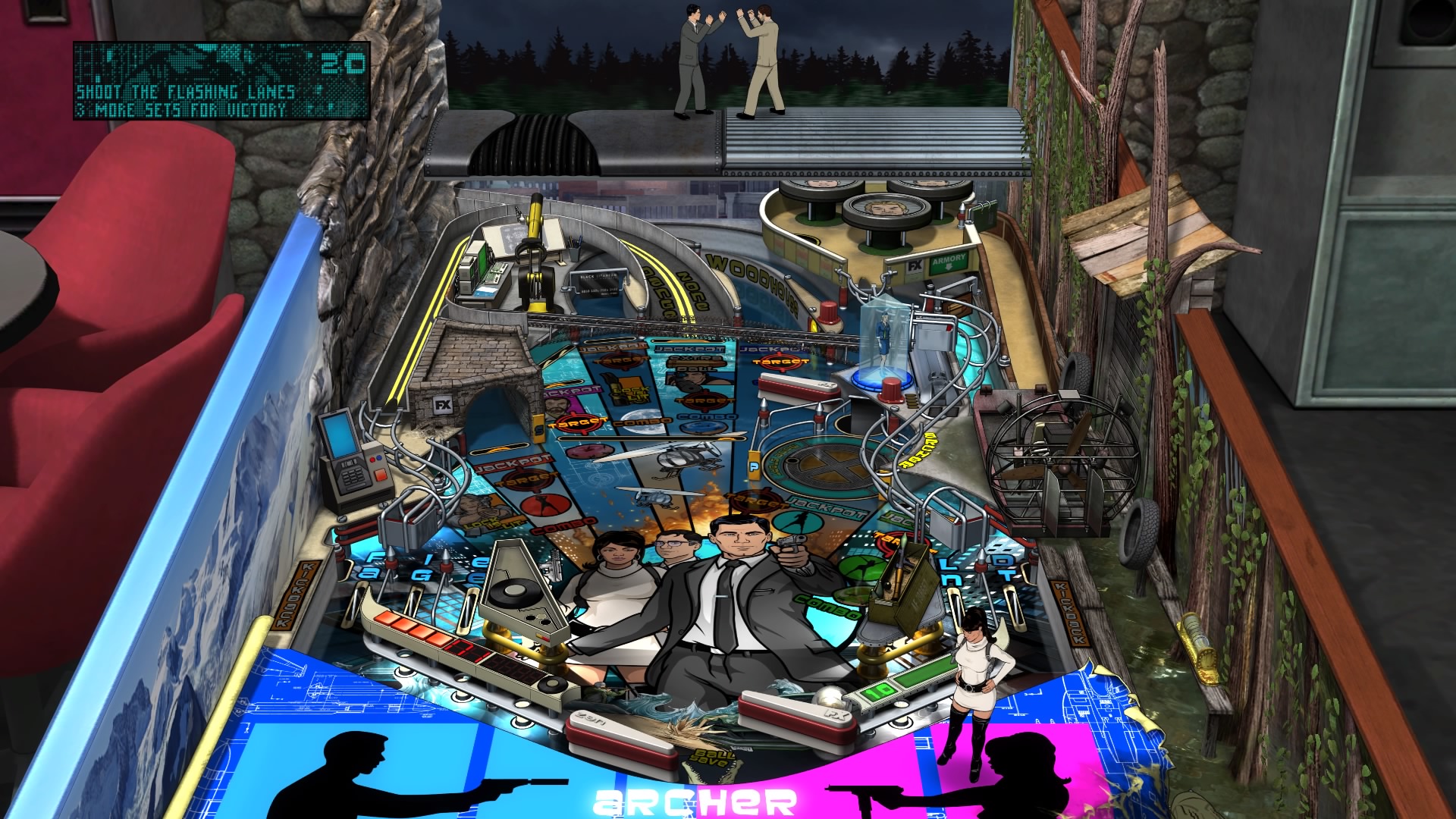 As a fan of the show, I think this table takes its inspiration from some of best episodes (Yakuza drifting anyone) while side-stepping what I think was the weak Vice Archer stuff.

One detail to note for the 'Archer' table is the FX network logo on the right flipper.

Now for 'American Dad.' I'm not sure it's stretch to say that this is my least favorite of the four shows. The 'American Dad' table, however, is surprisingly fun. Roger, the alien, seems to take the lead, and the 'Wheels and Legman' bits are funny, and thankfully quite deep, as I tend to hit that area of the table a lot. Stan Smith does get in on the action with a fun target shooting mission. 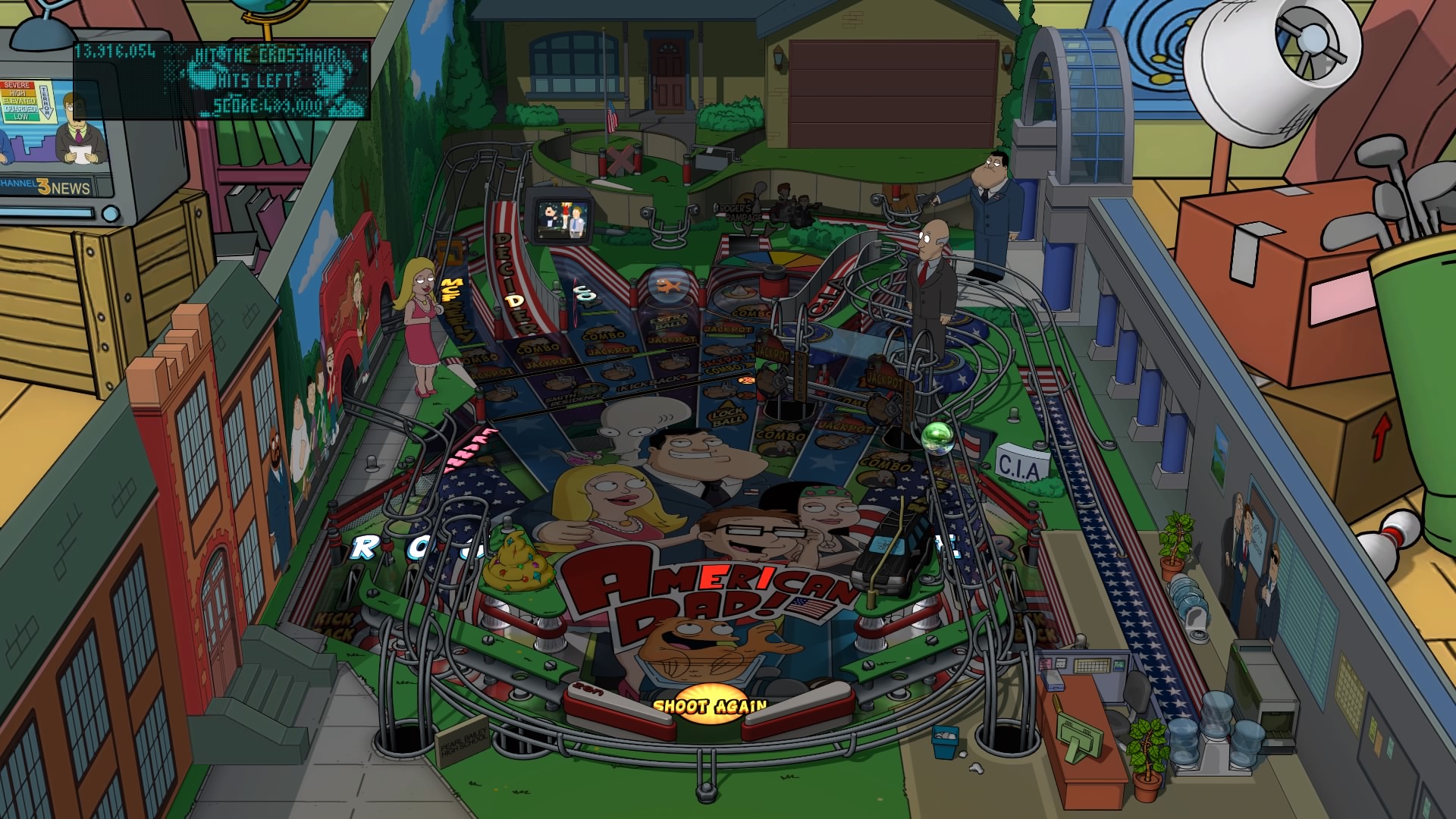 Unlike the Hayley mission, Stan's shooting mission involves projected targets. This is the kind of mechanic that works well in 'Zen Pinball 2,' but maybe not in a real table (much like a lot of the 'Archer' table mechanics).

In the 'Family Guy' table, Joe launches the ball right at Peter, but it's a trick shot to actually nail him. 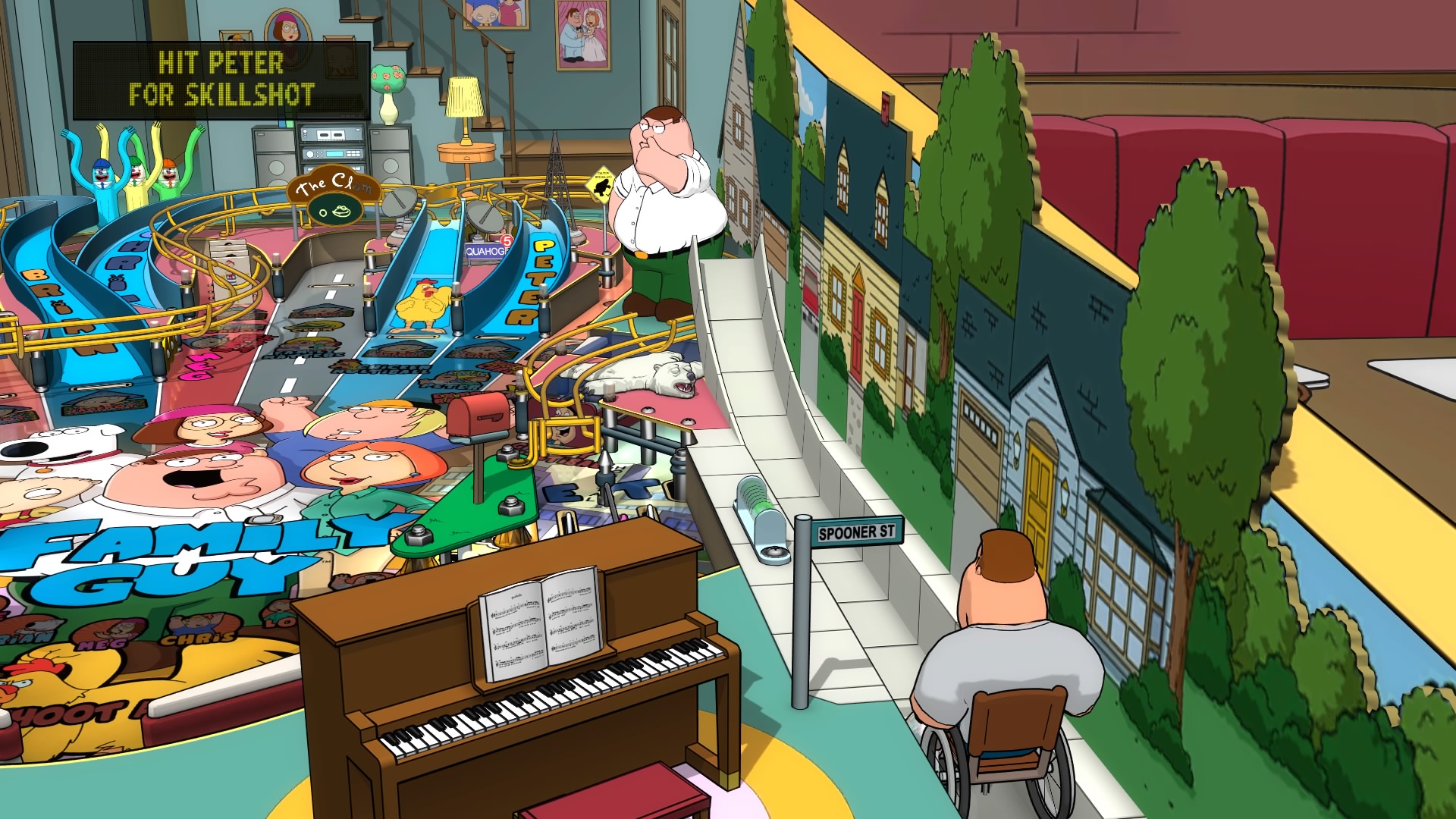 This is an open table with some nice rail work, but is gets otherworldly when the ball becomes a character. If there's anything more 'Family Guy' than Meg becoming the pinball and being basically thrown around for laughs, I don't know what it is. 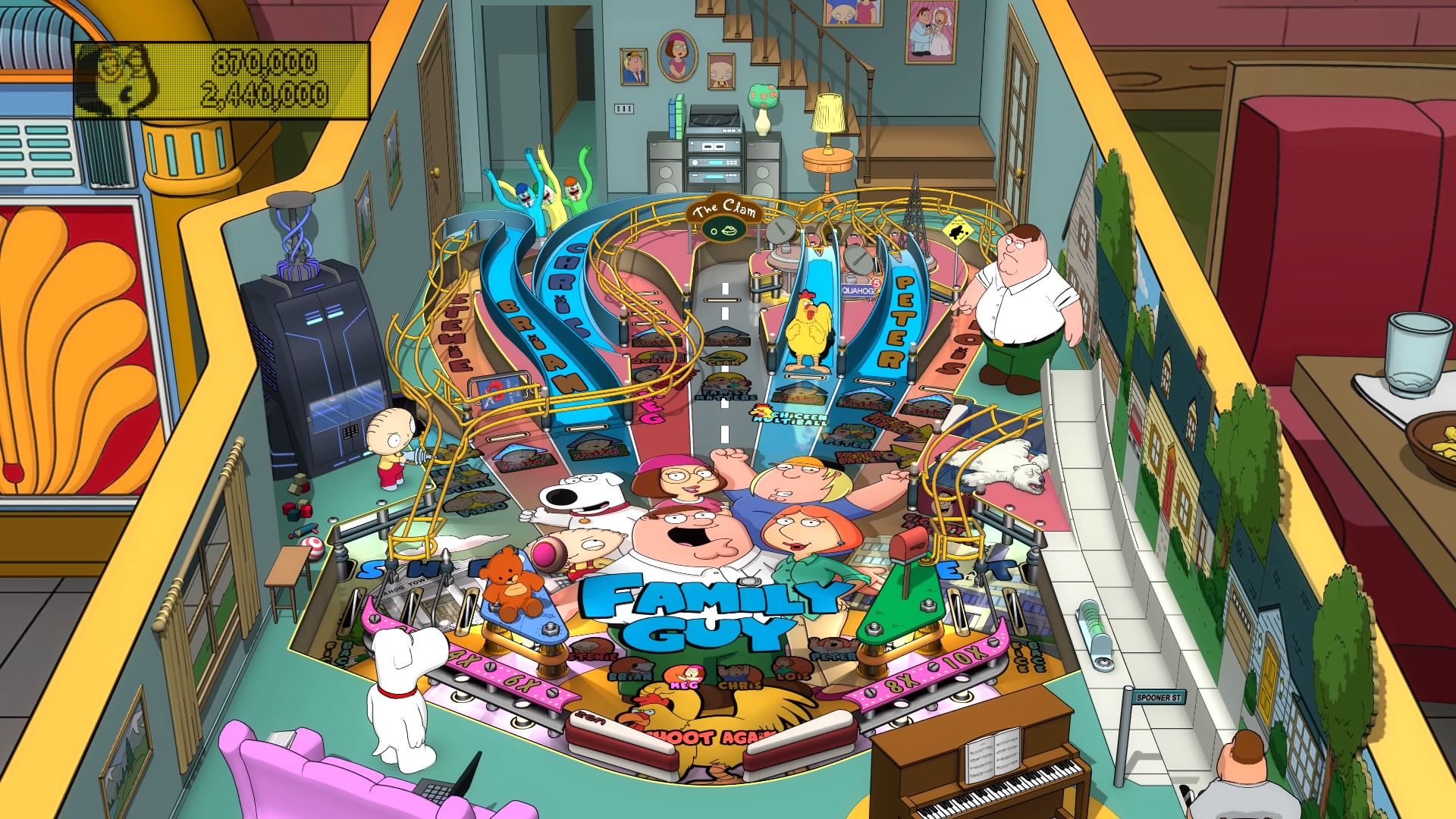 (Well, it might Peter and the Chicken fighting in multiball…)

Finally, there is the 'Bob's Burgers' table. This seems to be the most sedate of the set. It's seems like the most likely one of the four that could be a real table. (See the rat shooting mission.) 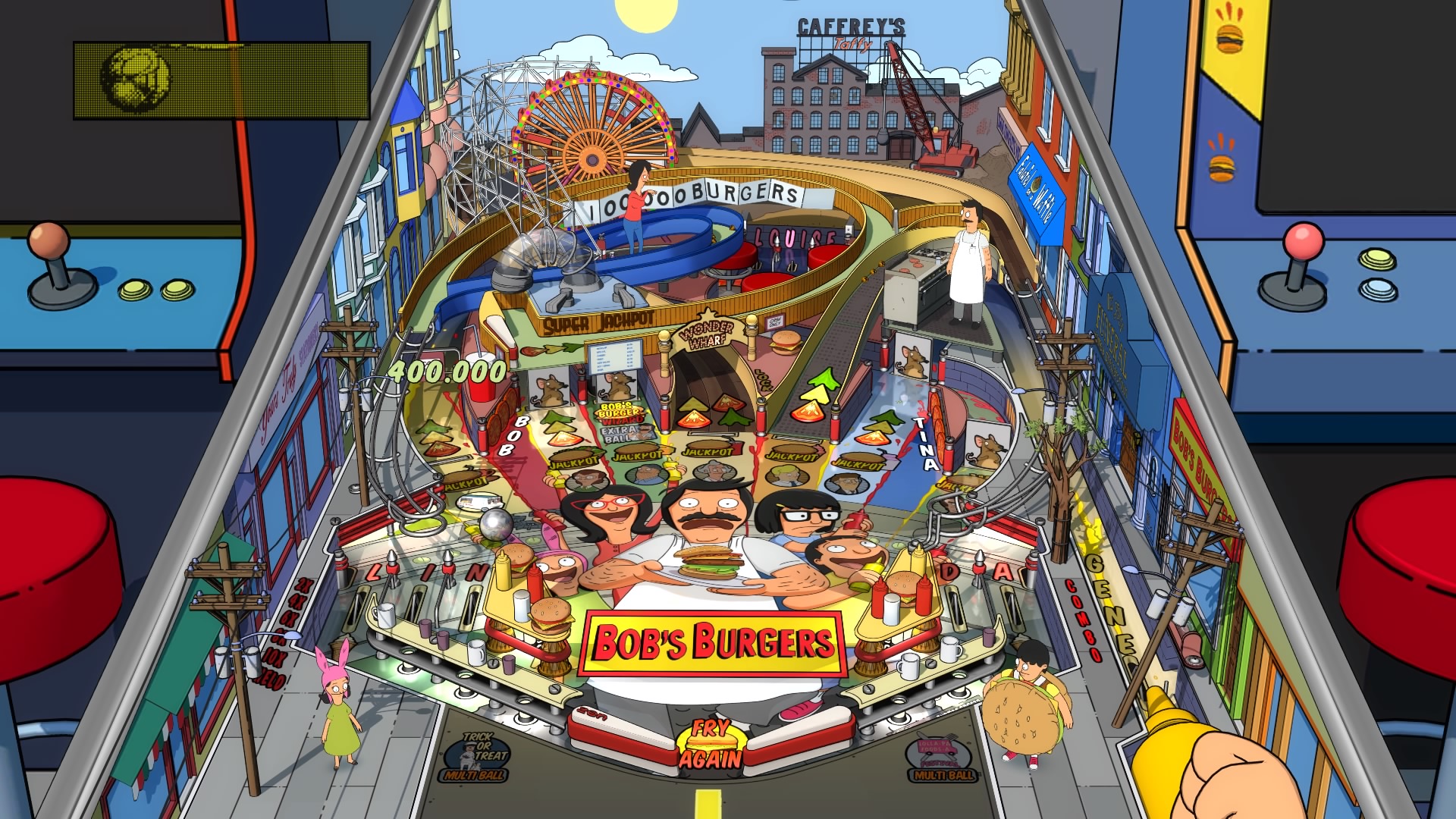 The top half is nevertheless a maze, while the bottom is nearly deceptive. The show logo towards the center can be a bit distracting, but once in the groove, the table plays very fast. It's here where the voices are the most appreciated as this is the perfect way to enjoy more 'Bob's Burgers' after binging on one of the seasons.

'Balls of Glory' is coming to consoles and PC next week. The PS4 version I have, includes cross-buy features with the PS3 and (woo!) Vita versions. The same should be true for the Xbox One and 360 versions. Meanwhile, each table is coming individually to iOS, Android and Amazon.