Take a Trip on an Airship Wrought with Suspicion, Stealth, Sabotage, & Separatists in 'Karaski: What Goes Up...'

Get those bribery and social drinking skills ready.

I have to admit that in the lead-up to PAX South, I was already quite interested in playing 'Karaski: What Goes Up...' To be clear, this first-person view game, is not one that features much in the way of violence, but at the same time, it's also not one of those narrative games without much in the way of gameplay.

'Karaski' puts the player on a stately airship. This is the first airship in the history of the Glorious Commonwealth, and as such, there are multiple parties that would like to see the voyage end in disaster. This danger exists just below the level of acceptable conversation, and this warranted concern about treachery and sabotage exists around the corners of each conversation between the passengers, and between the crew. The suspicion means that an innocent step onto the wrong deck, into the wrong hallway, or the wrong stateroom, is likely to be reported or at least noted. 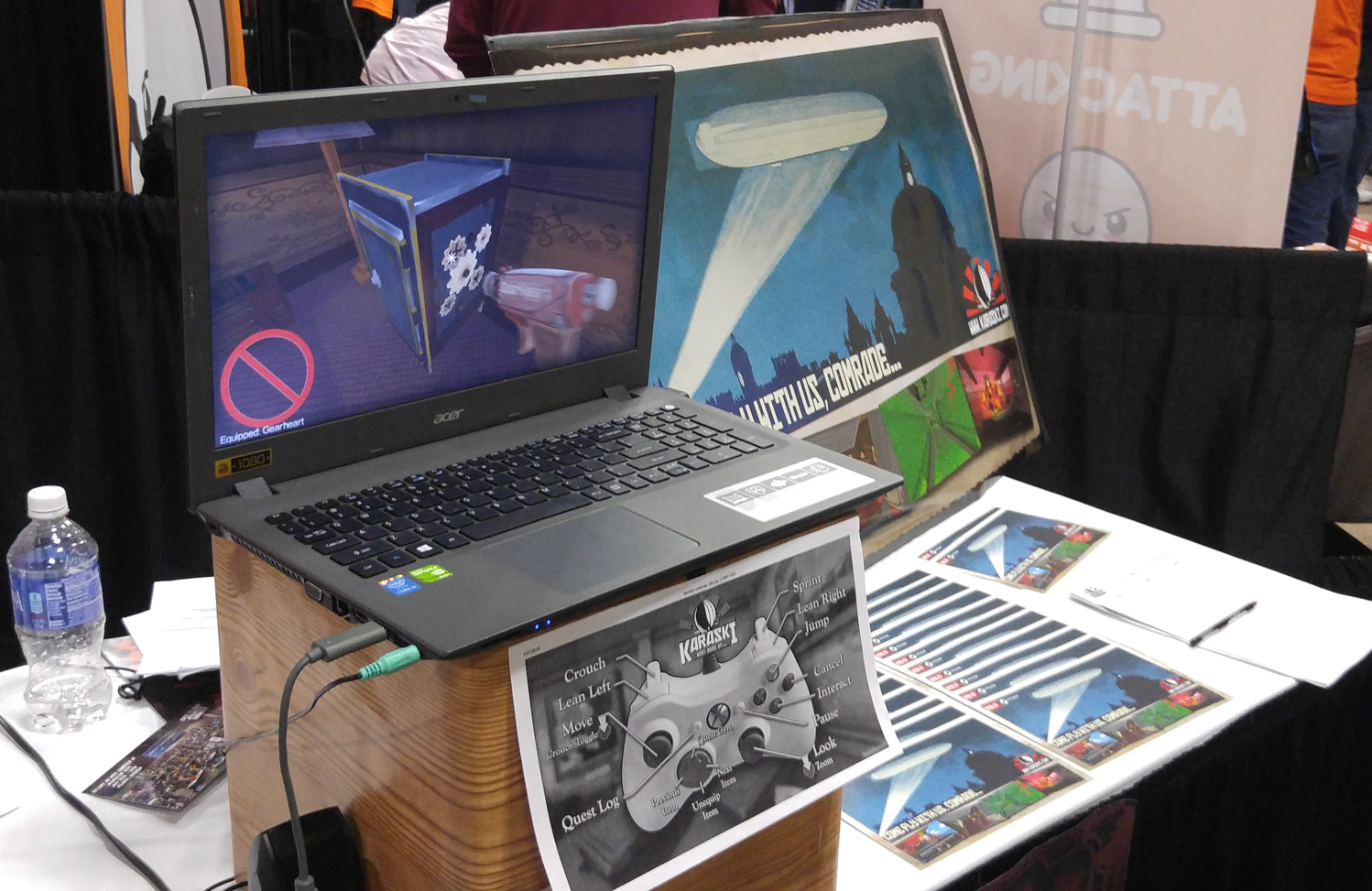 Even as signs of sabotage begin to appear around the ship, only the player character seems to have the wherewithal to investigate. With a group of primary suspects in mind, the player must search for clues, gaining access to each cranny of the ship while subtly interrogating each important person. There's just one catch, there is a distinct possibility that the player character is actually the saboteur in question.

When I entered into the game, the playthrough was already quite advanced. This is not because of some developer or demo build tricks, rather, the previous player had been engrossed for some time and had gotten quite far. To get my bearing, I pulled out my quest arrow. This helped me to get to the right deck, and to figure out that I needed to talk to the quartermaster. 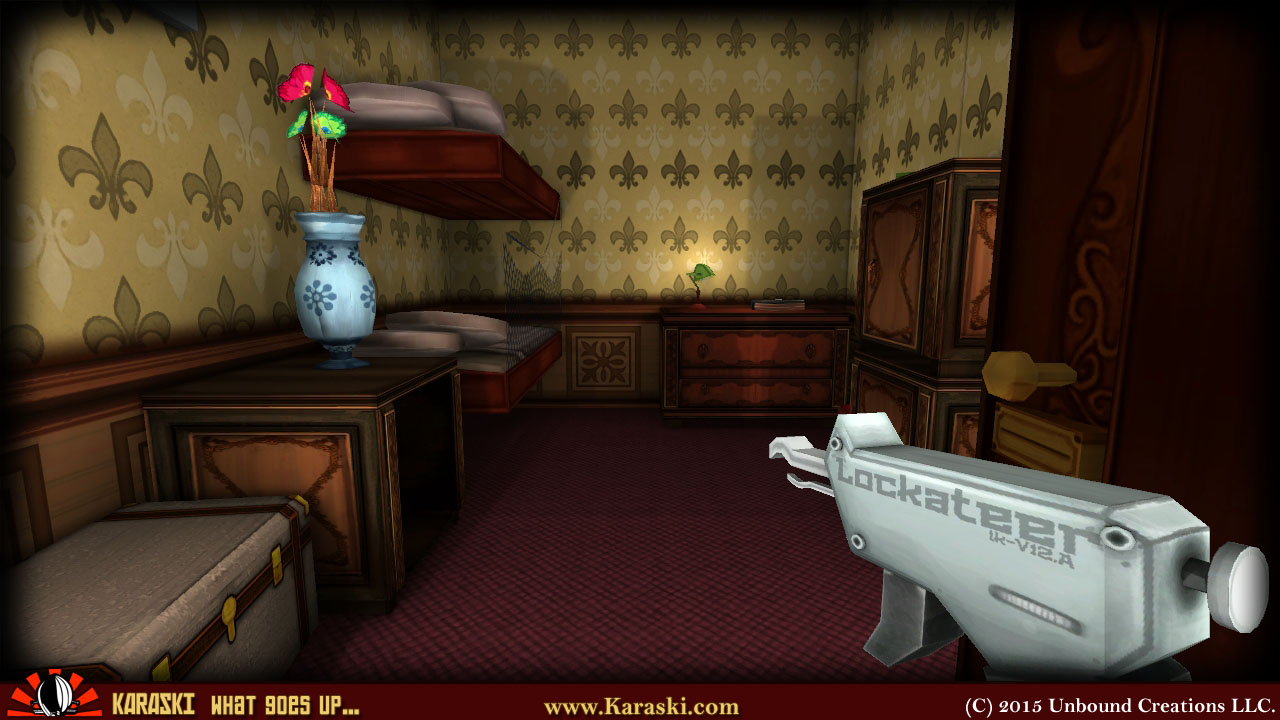 To get to the quartermaster, I had to use a variety of tricks. In one area, I had already bribed the crew, so it was cool for me to traipse about. Using my lock pick tool, I was able to break into a locked stateroom, and using my vent tool, the Venticator, I was able to use the vent access to get to the quartermaster area of the deck. From there, I had to be very evasive to avoid the searching eyes of the wandering crew (no bribe luck here). That meant using the peek buttons to peer around corners. Regular use of my quest arrow helped my navigation. Once I got to that quartermaster, I tried to question him about the sabotage rumors. He straight up tried to send me away. I had some money, and I could have tried bribery. I also had a state-issued investigative badge (which was no doubt fraudulent). I used both of these skills later on, but here I kept the conversation light. I pretended that we were old chums from the old neighborhood, the old village. As I constructed a web of lies to endear the quartermaster to me, it seems that some of these dialog choices had a retro effect on my character.

Having established a tacit connection, I offered to share a drink with him. As it turned out, this particular player character was female, and by choosing my words carefully, I was able to get some info from the quartermaster. Of course, eventually I showed too keen an interest, which reminded him I was not authorized to be in that part of the ship. He in turn notified the captain of my innocent trespass, but thankfully, not my questions. 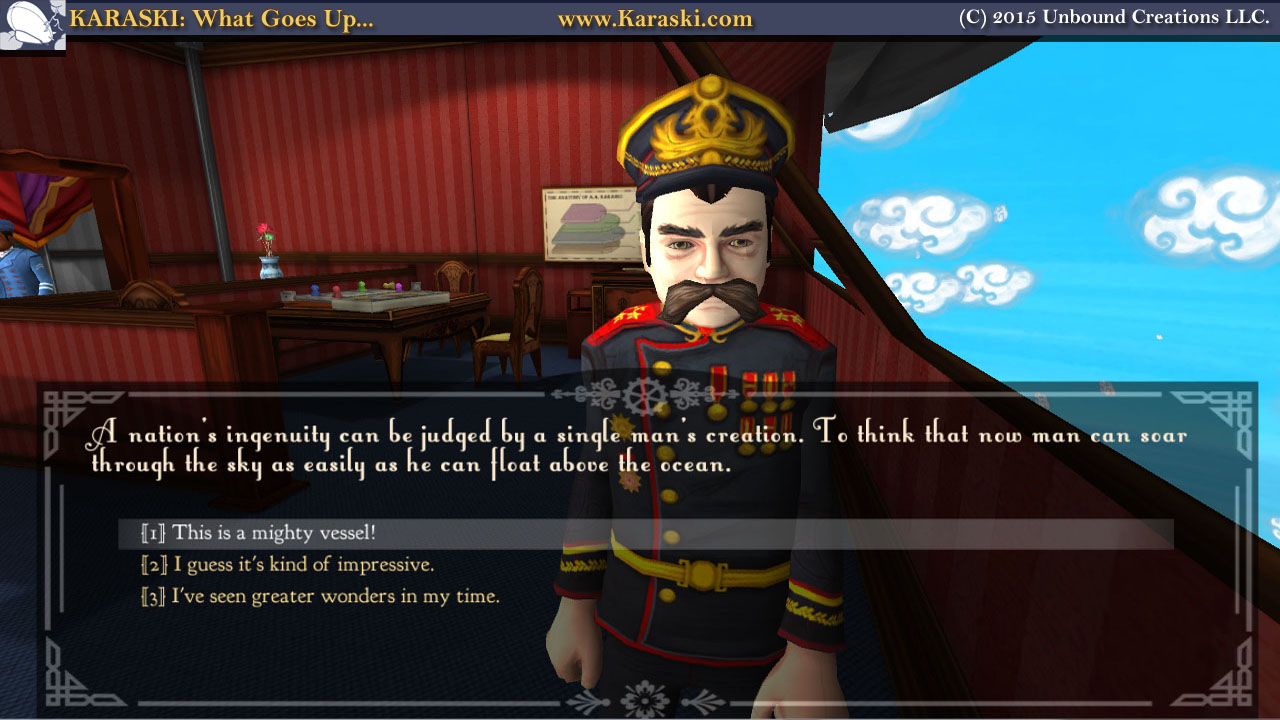 From here, I had to gather the suspects together for some kind of secret meeting. Boy, when I later had to tell that captain about this secret meeting, he was pretty teed off. We had a difference of opinion as my authority on the ship, and I was like "well- see you at the secret meeting," and I left his presence.

While each infraction on ship has an effect, things won't devolve into a shooter. In world created and flavored by the developer, Unbound Creations, the characters are used to living with suspicion. I shared friendly words and drinks with multiple characters who were happy enough to remind me that I might be the saboteur for all they knew. The constant tension they have had has actually made them less alarmist. Most of them anyway. 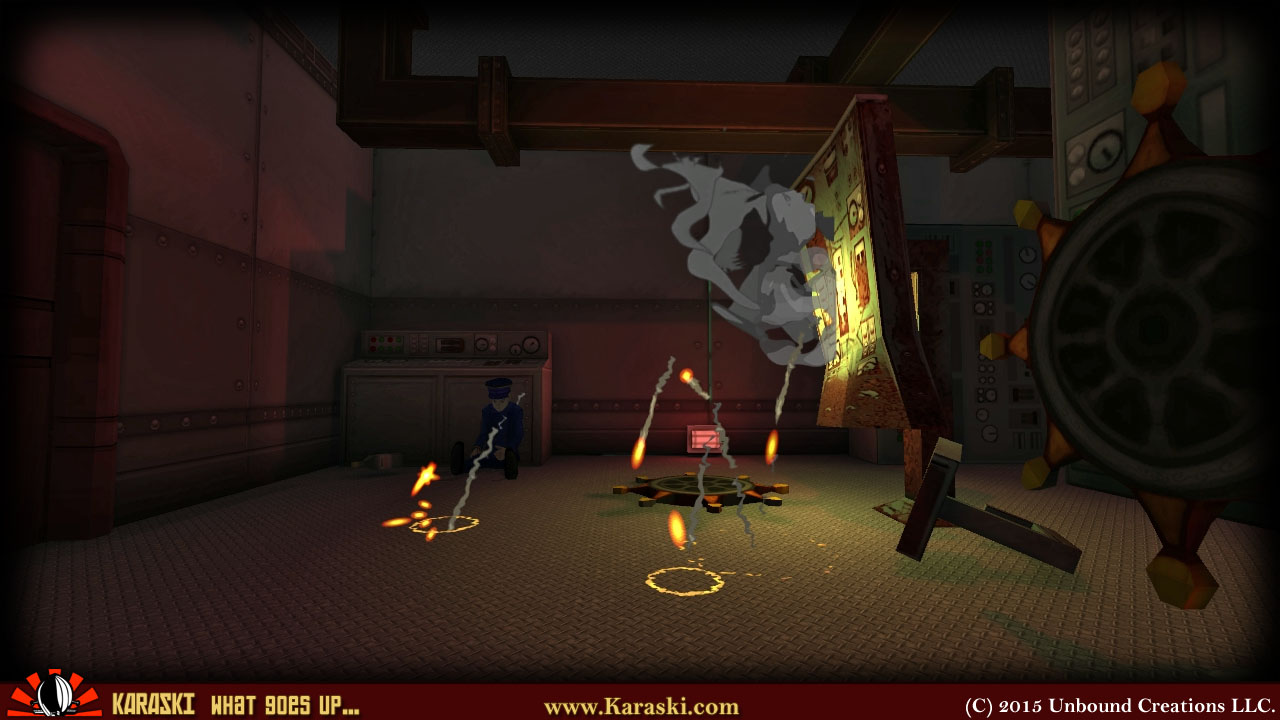 The game has multiple endings, and it seems like one player's experience in terms of events and allies, could vary greatly from another's. As I said in the open, 'Karaski: What Goes Up...' intrigues me, and after playing, I came away quite charmed. The charming qualities outweigh any of roughness that could be associated with budget. For anyone wants to spend some hours getting deep into a narrative, 'Karaski: What Goes Up...' seems perfect.