To kick off E3, Microsoft unveiled a number of important initiatives, many of which mark the progress the console maker has made since the debut of the Xbox One (and the preceding E3 era). One such revelation involved the announcement of the Xbox Elite Wireless Controller (Note the absence of "One" in the title). During E3, I was able to spend several sessions hands-on with a pre-production version of the new controller as well as some time with the engineering team and the Xbox Partner team. 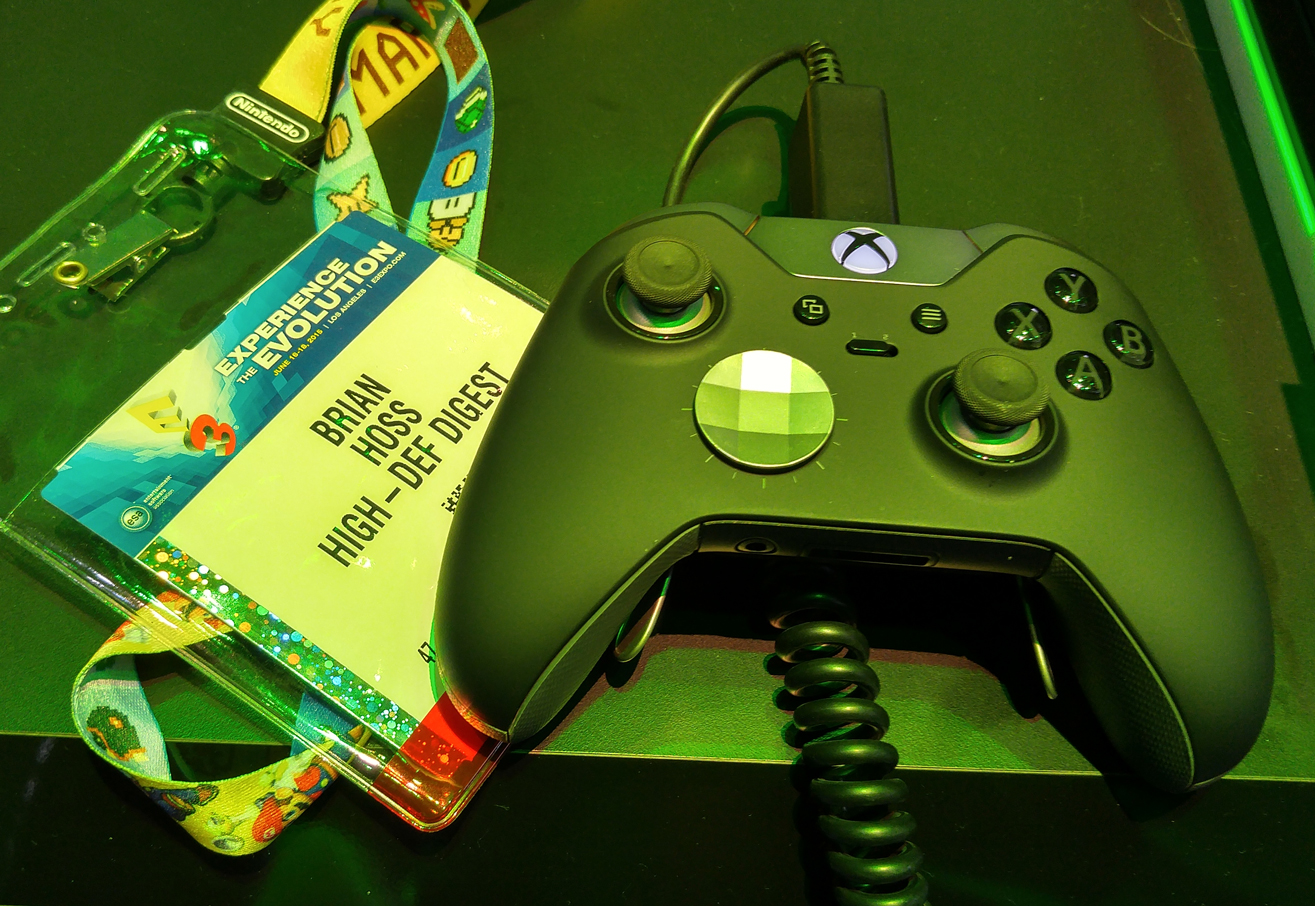 For those who might not be familiar with the Elite controller, here's a rundown from Microsoft:

The Elite controller's most obvious features over the standard Xbox One controller include mappable back paddles and a modular set of thumbsticks and d-pads that allow the user to customize the controller. Those features, along with the price tag, invoke the very image of aftermarket controller customizers like SCUF. And yet, it's clear that Microsoft has a larger market segment in mind.

The Elite controller, which has been around in usable state for over seven months inside of Microsoft, has been produced and created with various user groups in mind, namely, the hardcore, competitive types who have been customizing their controllers since the 360 era, and those users who find that for one reason or another, that standard controllers don't hold up well (only a few months to a year) to their usage. 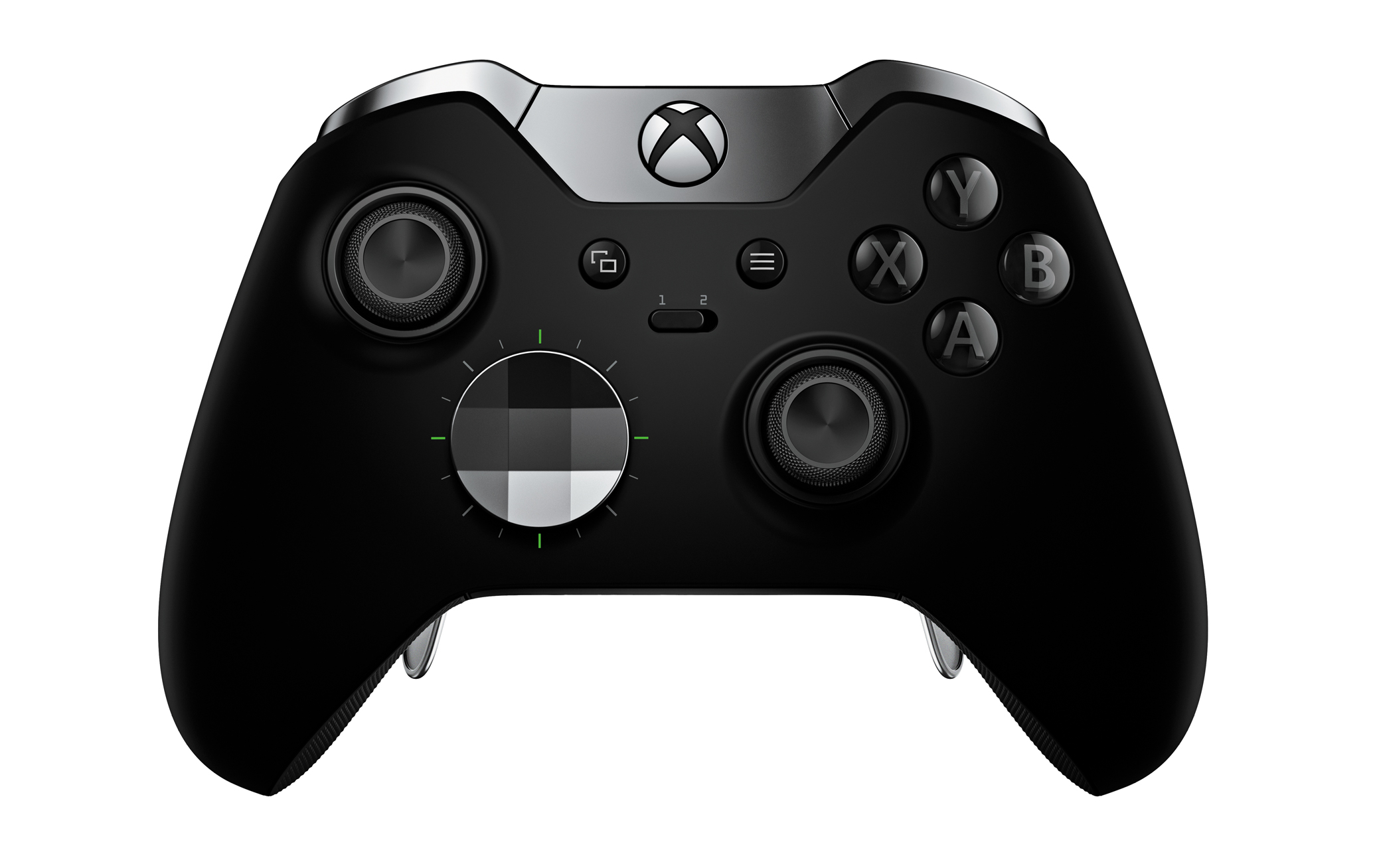 The Elite controller's weighty existence confirms and reinforces this idea. Though it comes bundled with a braided micro USB cable, it still uses the standard AA battery design. The controller features aluminum and steel components throughout, and the thumb sticks and d-pad have hefty mechanisms underpinning there works. Both the thumbstick shafts and the surrounding rings are free of plastic, and the idea is to completely eliminate the dust and wear that is typical for the last 20 years of controllers.

While other touches, such as the two tone diamond grip and monochrome face buttons are straight out of the hardcore controller feature set, the user customizable sticks, d-pad, and paddles are much more particular to the Microsoft design, and it shows. Similar features are filtering through the aftermarket, but Microsoft's implementation involves magnets. The thumbsticks and back paddles are easy to remove and change (not just toolless, but easy), and I have the feeling that chucking an Elite controller across the room would send one or more pieces flying.

Not only can use the user can swap sticks, remove and add back paddles, and change out the d-pad at will, (no powering down required), but twin toggles (Hair Triggers) on the controller's underside let the RT and LT become quick press buttons. 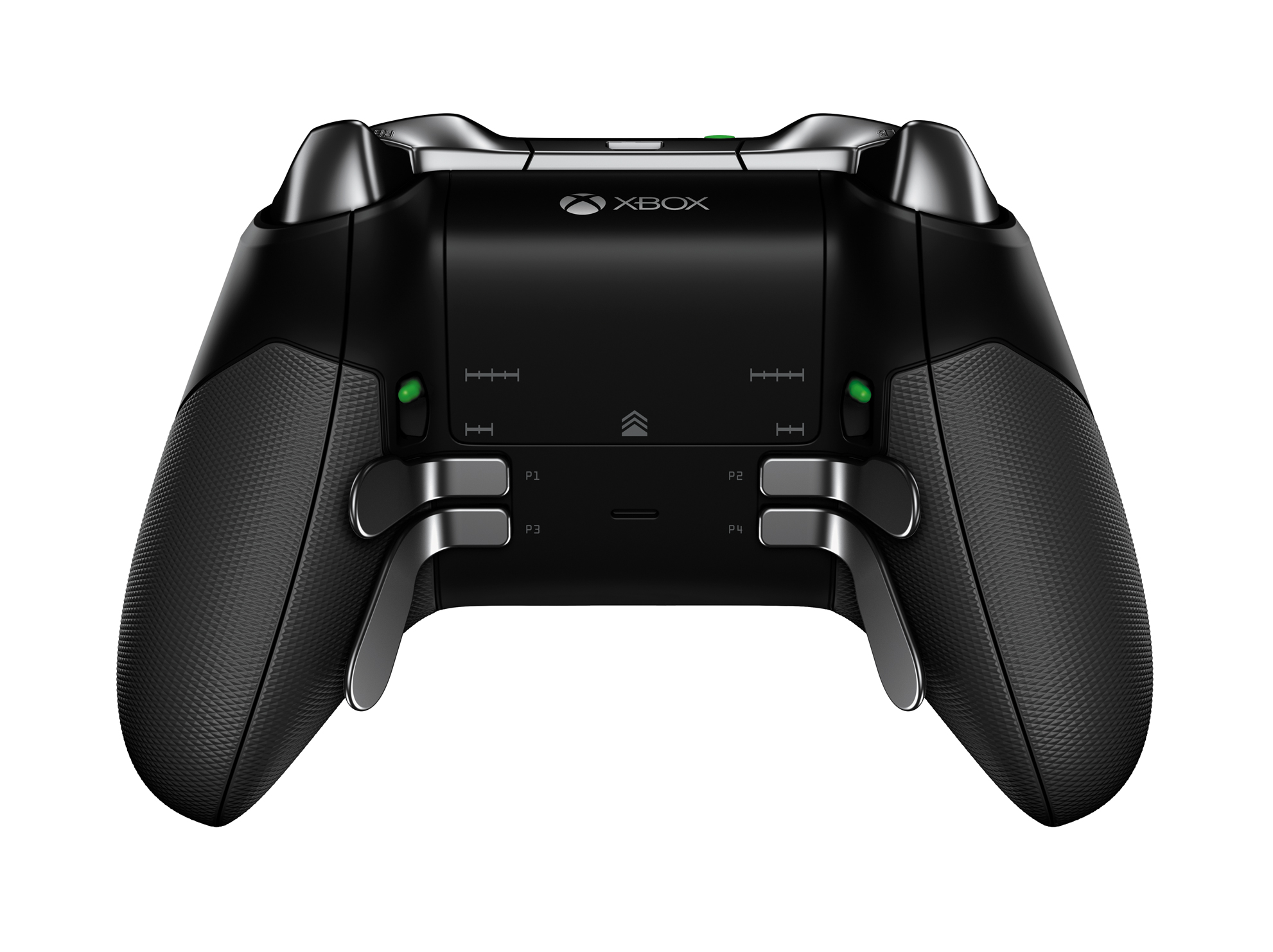 And of course, the Elite controller also houses the refinements of the standard controller redesign. The tweaked bumpers and standard 3.5mm jack are part of the whole package.

That package includes a nice nylon case, that organizes and house all of the components. Such casing goes in line with the premium pricing, and keeps all those pieces (hopefully) from disappearing. In my case, I found the standard d-pad piece to be a bit tricky to extract. (I used one of the back paddles to carefully remove it.) 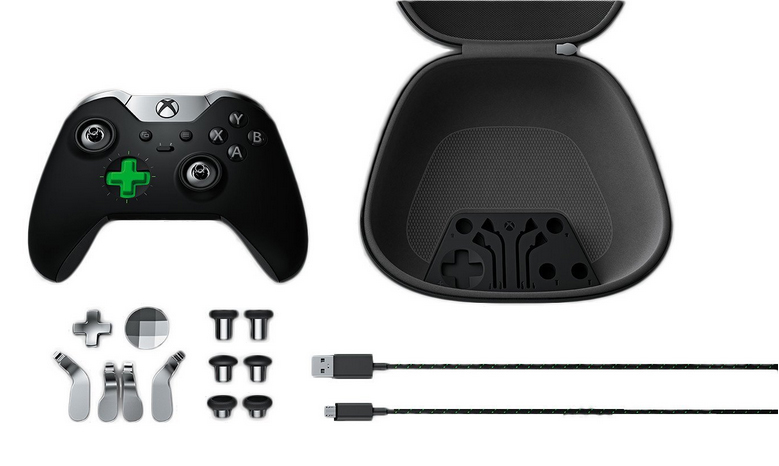 Naturally, it's on the software side where Microsoft can really flex their muscle. The Elite controller can be completely remapped for every game by way of the Xbox Accessories App. (No macros, just button ramapping.) The center toggle on the controller allows the user to switch between two separate profiles, but this is really a per game concern. (Two users using the controller in different ways for the same game would find in-game switching useful, but so would one user switching classes, say in a online shooter.) By way of the app, the Elite controller can be remapped specifically for each game, and the controller will recall that mapping whenever a game is fired up.

Thus, an enthusiast player can set and forget. So in my case, I know that I like to roll with two paddles (as opposed to four), and I like to set the left paddle to be sprint. (Assuming sprint isn't the same as interact like in the 'The Witcher 3.') As Microsoft had at E3, I'd use two back paddles for shifting in 'Forza 6.' As I did on the 360, I like the idea of choosing a d-pad instead of being stuck with a poor one, but I'll need more time to be sold on the Elite controller's d-pad options, like say with the 'Rare Replay.' Ditto the thumbsticks. The shapes are nice, but the height is something else altogether.

For users who prefer OEM solutions, the Elite controller is an obvious choice, and just as obvious is the associated sticker shock. There are any number of 360 peripherals (or PlayStation peripherals) whose prices indicate a healthy profit margin. That lofty price may keep the Elite controller from going mainstream, but Microsoft can still expect that thousands of users will get their first back paddle controller experience in October. 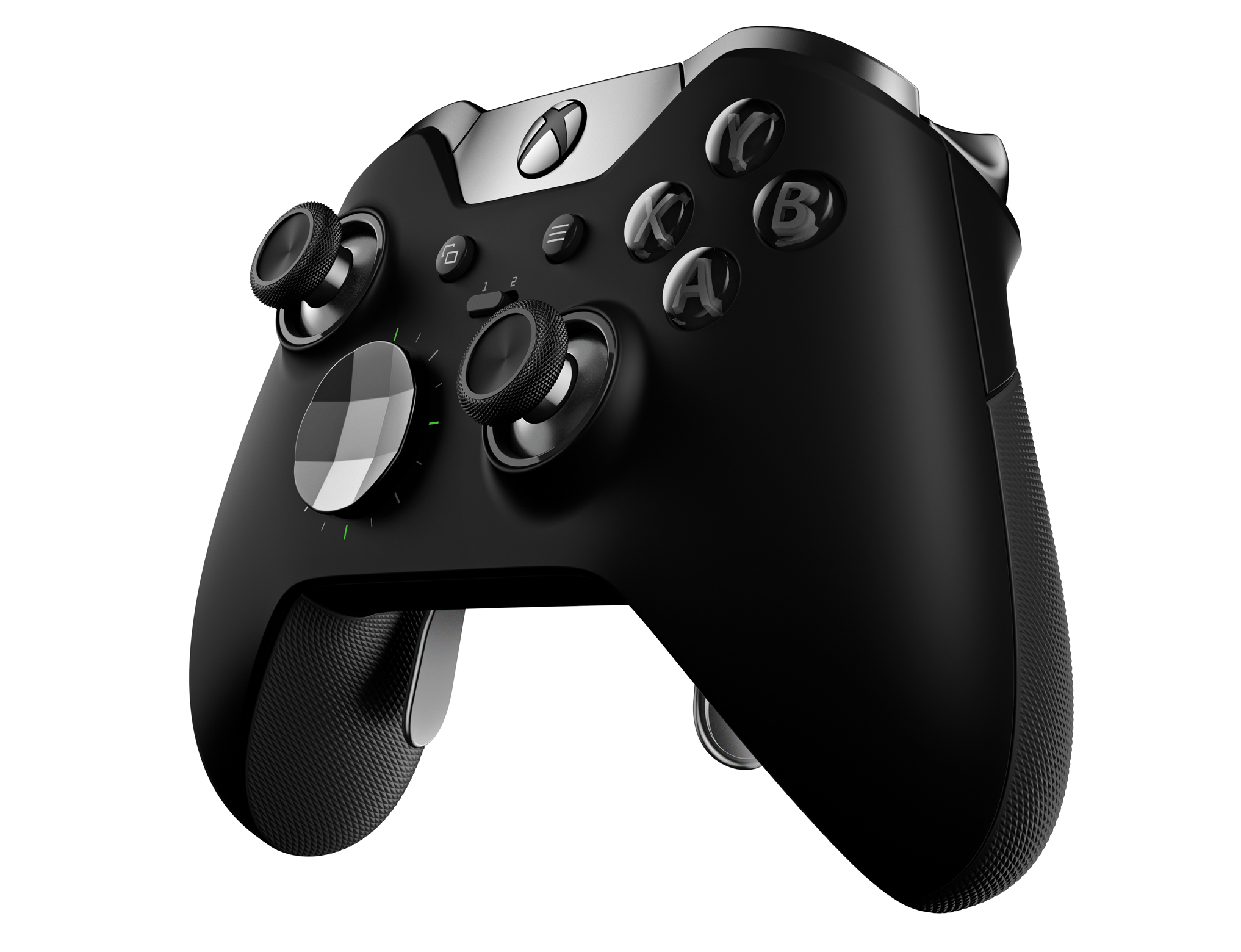 Along with a healthy sales expectation, the Elite controller carries another kind of eventuality, one that Microsoft hasn't been shining a big light. What happens when a game like 'Project Cars 2' asks their users to request features? In-game support of the Elite controller will be there. Not just UI cues, but a special options page. Microsoft is not talking this possibility up, however, developers have the option to do so. If third party developers can be expected to take advantage, how long until Turn 10, 343 Studios, and The Coalition follow suit? I'd say not long at all.

At any rate, Microsoft has seen the custom controller market and decided to give users a first party option. The result is slick, if a bit more gadgety than what tournament players normally opt for. It's the kind of product that suits its buyers, a one way upgrade. Because of its built-in usage possibilities, I take the Elite controller a lot more seriously than the Steam controller in terms of finding a useful place in the home and affecting future designs. Barring some kind of inherent flaw in build quality (and with this kind of product, Microsoft will need to make good on any such issue), the Elite controller is going to dramatically grow the number of users expectant of a high quality controller option. 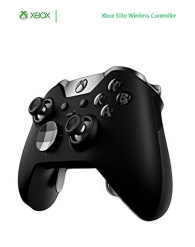