Iron Sights in VR: 'Farpoint' and the PlayStation VR Aim Controller Are a Promising Match

VR gaming had a massive presence at E3, and that's thanks in no small part to Sony, whose sizable West Hall booth was dominated by PlayStation VR set-ups. This of course followed Sony's post E3 conference VR party, which was exclusively dominated by PlayStation VR. While titans like 'Batman,' 'Star Wars,' 'Final Fantasy,' and 'Resident Evil' have been positioned to attract players to the day one launch experience, Sony also produced more of a wild card. That would be the VR space adventure, 'Farpoint.' 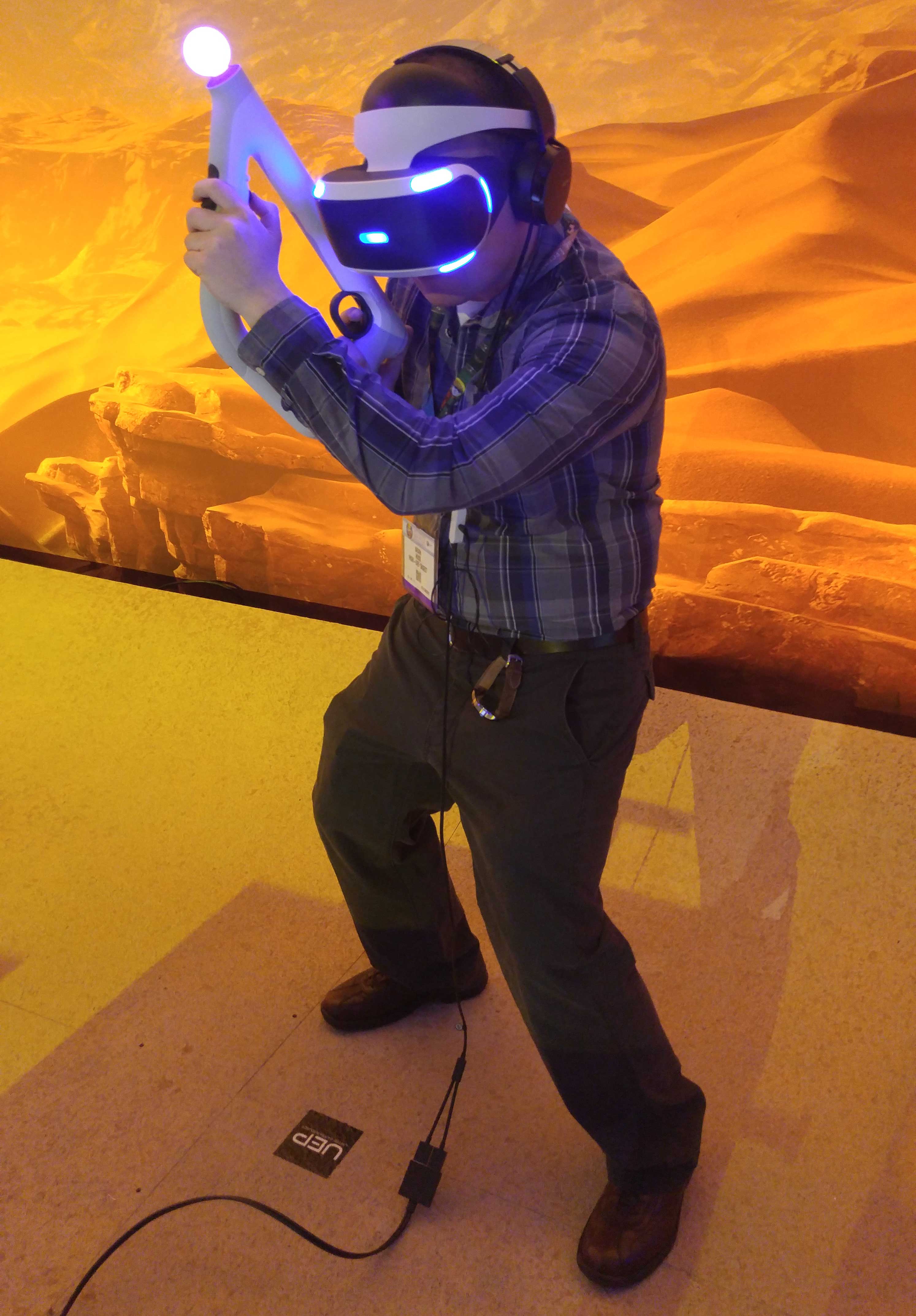 Developed by Impulse Gear, 'Farpoint' puts the player in a spacesuit on a hostile and desolate world. The actual 'Farpoint' demo that I played at E3 employed a holographic narrative. That is, the game played like an interactive playback of record, with jumps in time and space to ensure that a lot could be experienced quickly.

While I was able to walk around, pick up weapons and ammo, and fight off the alien fauna, each vignette ended in one these time shifts, often while I was still engaging enemies. I want to make clear that this all fits well with a demo experience, and it may not be the format used in the actual game.

What's more important is the gameplay presented in between these jumps. And really, there's no way to describe the gameplay, or really any of 'Farpoint,' without covering the new hardware involved. It's not just the PlayStation VR headset, in the case of 'Farpoint,' Sony also employed their new PlayStation AIM VR controller. 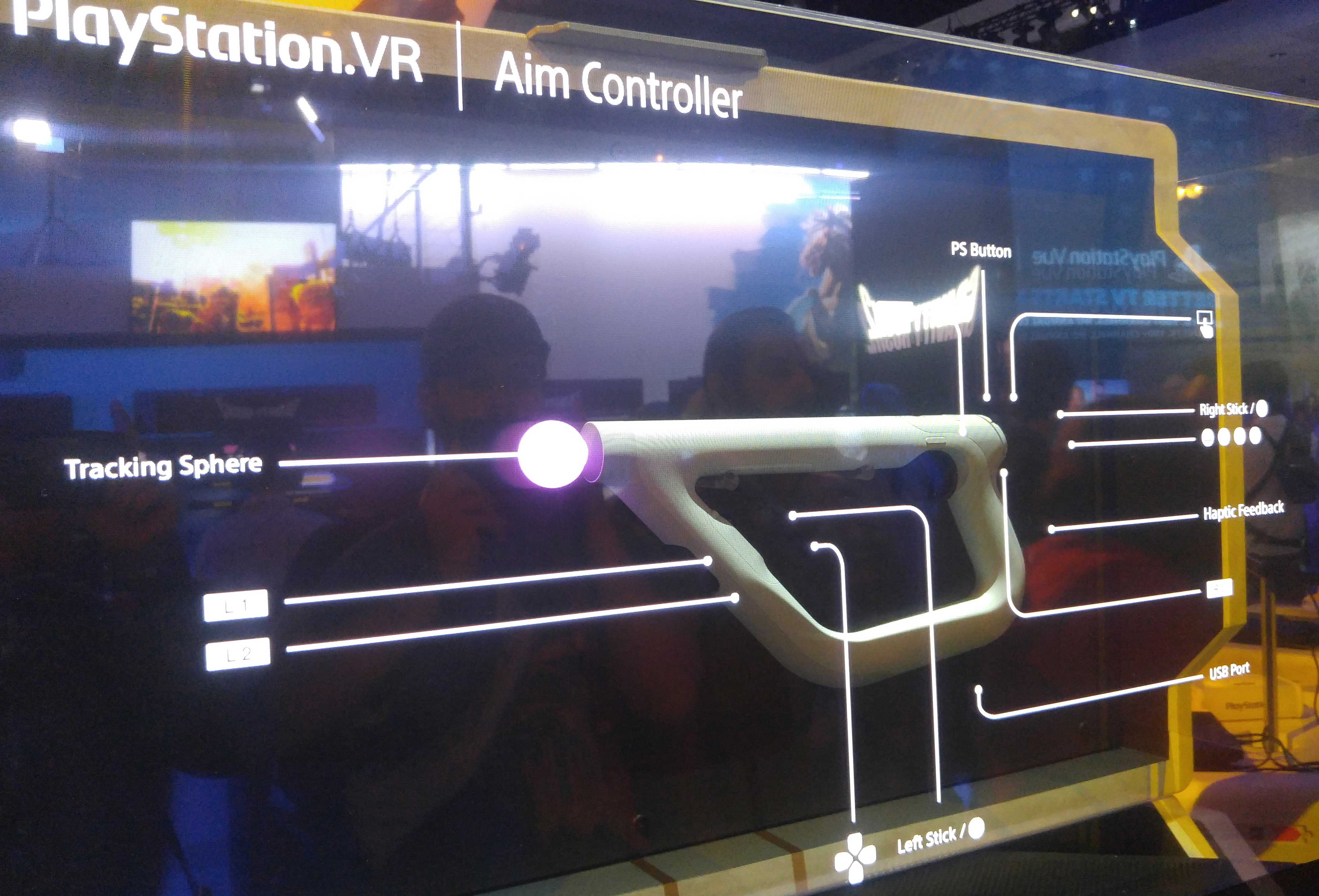 No doubt, anyone familiar with the PS3 era PlayStation Move can be forgiven for thinking that this is yet another plastic shell with PlayStation Move and Nav controllers shoved in it. And yet, while the AIM controller is descended from such ideas, it is its own single piece of hardware. Unlike any of the PS Move/gun shell combinations, the AIM has two analog sticks, plus a full complement of DS4 controls, and all of this in a finished package. For example, the trigger pulls aren't some jury-rigged thing, and there is haptic feedback

The AIM controller looks and feels great, and as I will detail here, it works well in 'Farpoint.' That said, it's far from a slam dunk, as it has some very Move-like limitations. In practice, these limitations are fine for the realm of light guns, but they definitely hinder the "VR" aspects. 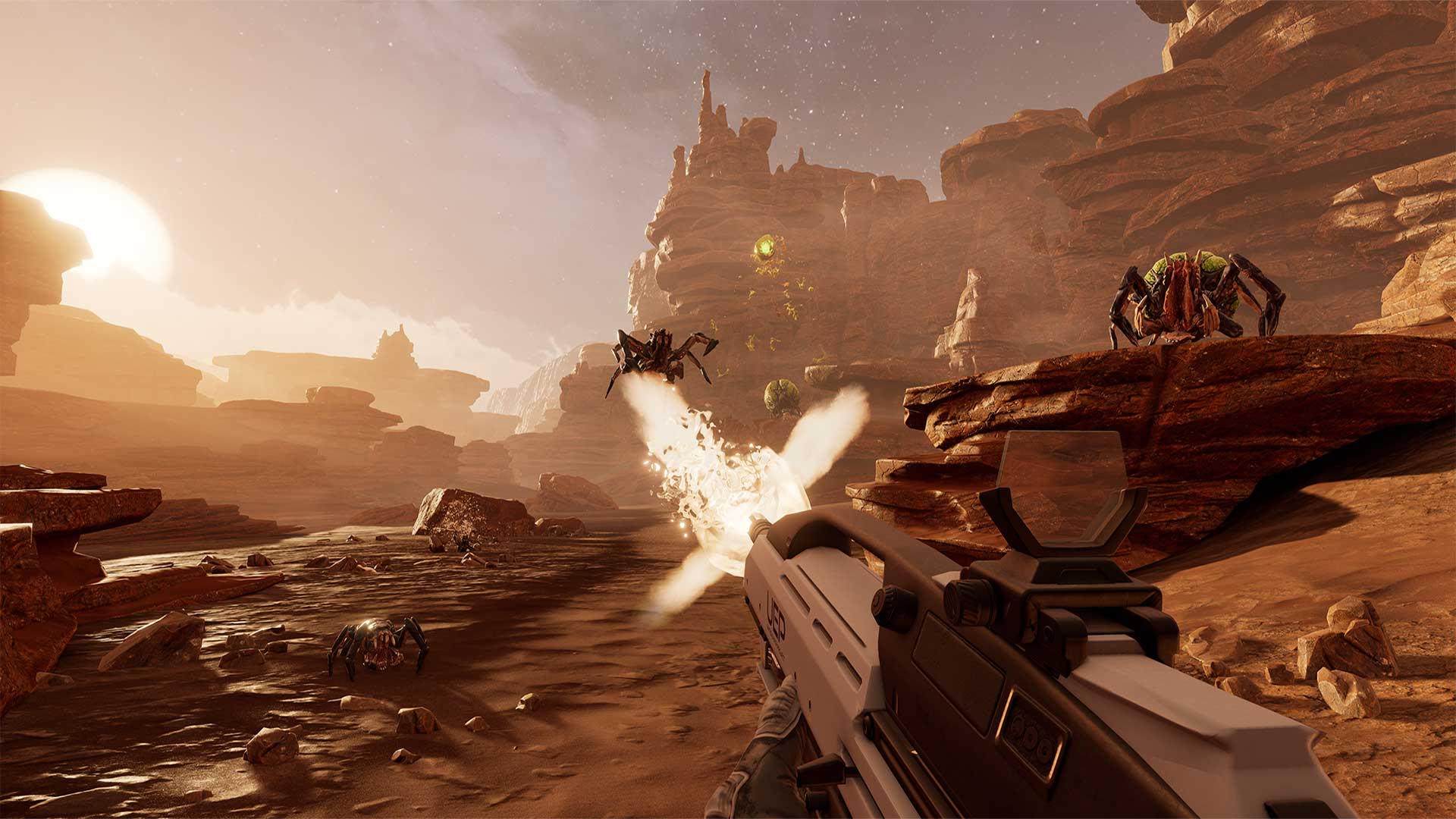 In the 'Farpoint' demo, I walked an inhospitable planetary surface. I did this by moving the left stick. (I kept my feet planted.) I could control my view by moving my head, but to aim the in-game weapon, I needed to aim the AIM controller. This might sound pretty basic, especially as holding a gun on a weird planet in video game makes for an itchy trigger finger, one that's sure to find release as enemies are like to be nearby and very easy targets. Even so, putting the AIM controller to my eye and shoulder was even more natural than if I had been playing a regular console FPS. 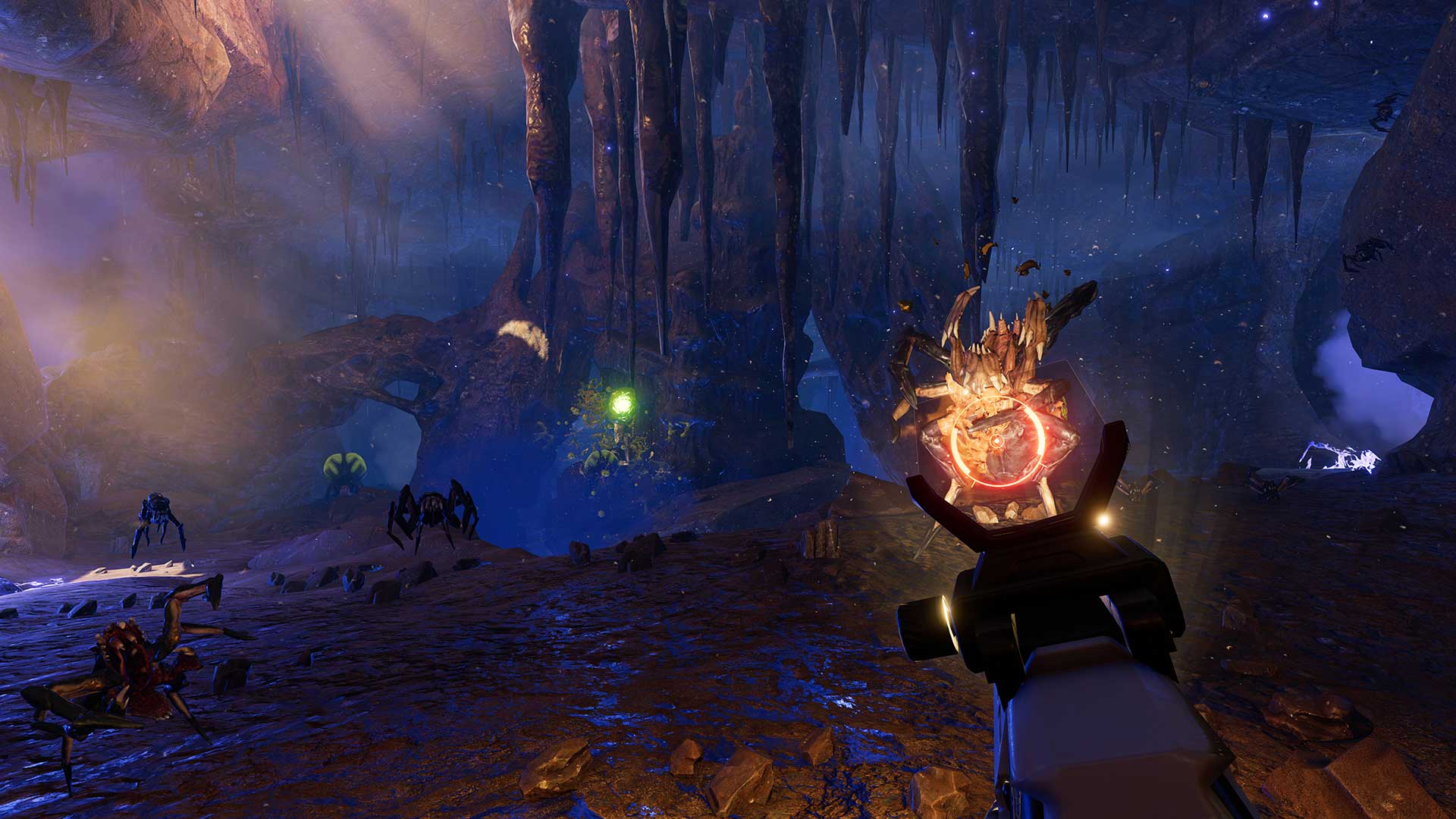 I began with a kind of machine gun that used a cooldown rather than ammo. Shooting the spider-like enemies as they rushed me had the great arcade/shooting gallery feel. Of all possible FPS games, I think 'Farpoint' specifically gave me a 'Half-Life' feel. I moved along expecting creepy and aggressive alien creatures, of the kind that burrow underground, hatch from eggs, and can't help but launch towards my face or sling acid my way.

Eventually, I picked up a shotgun, which did use shells. Switching between the machine gun and the shotgun at will, I could hit targets at a distance or issue serious stopping power up close. I next picked up two kinds of secondary ammo. The machine gun has a very conventional grenade launcher, but the shotgun has a laser guided rocket launcher. Naturally, the front trigger (L2) fired the secondary ammo while the back trigger fired primary ammo. I could reload using the side R1&R2 buttons or else tilt the gun back. 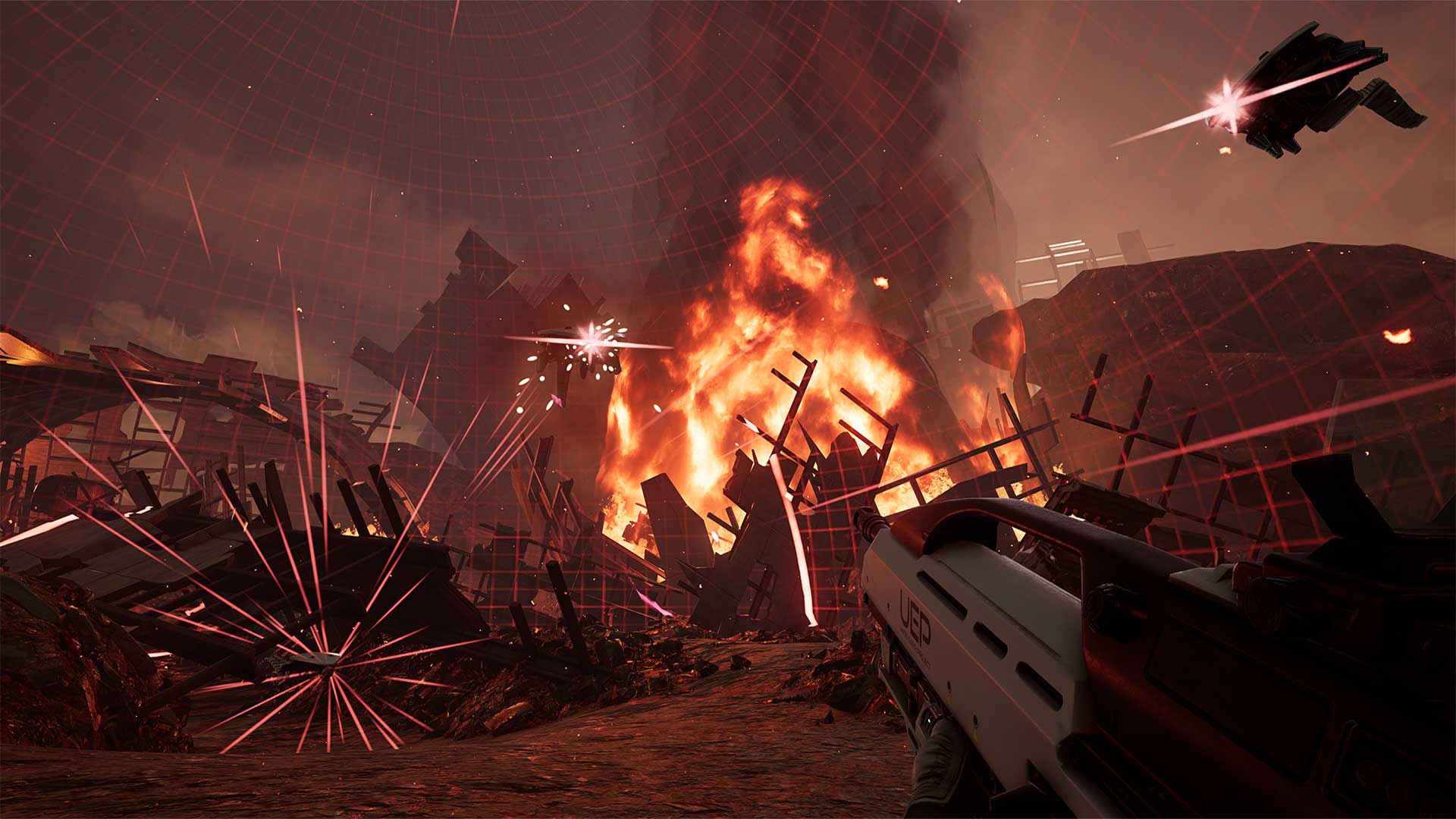 I played the demo very cautiously. Once I had the rocket launcher I crept forward and, seeing around the edge of a rock, spied a good-size enemy waiting half-hidden about ten meters up. I fired my laser guided rocket launcher, and the rocket immediately collided with the nearby rock edge, blew up and killed me.

This was my only death in the demo, and as I attempted a similar approach, I made sure to give the rocky corner a bit more spacing.

As I said before, there were times when I faced a furious amount enemies, only to have the demo jump forward, which kept things moving in spite of my cautious movements. One key to understand is that everything, especially the AIM controller, required line of sight with the PlayStation camera. Although I could glance backwards, this was all really a forward-facing experience. That made the arcade-like light gun feel even more uncanny. 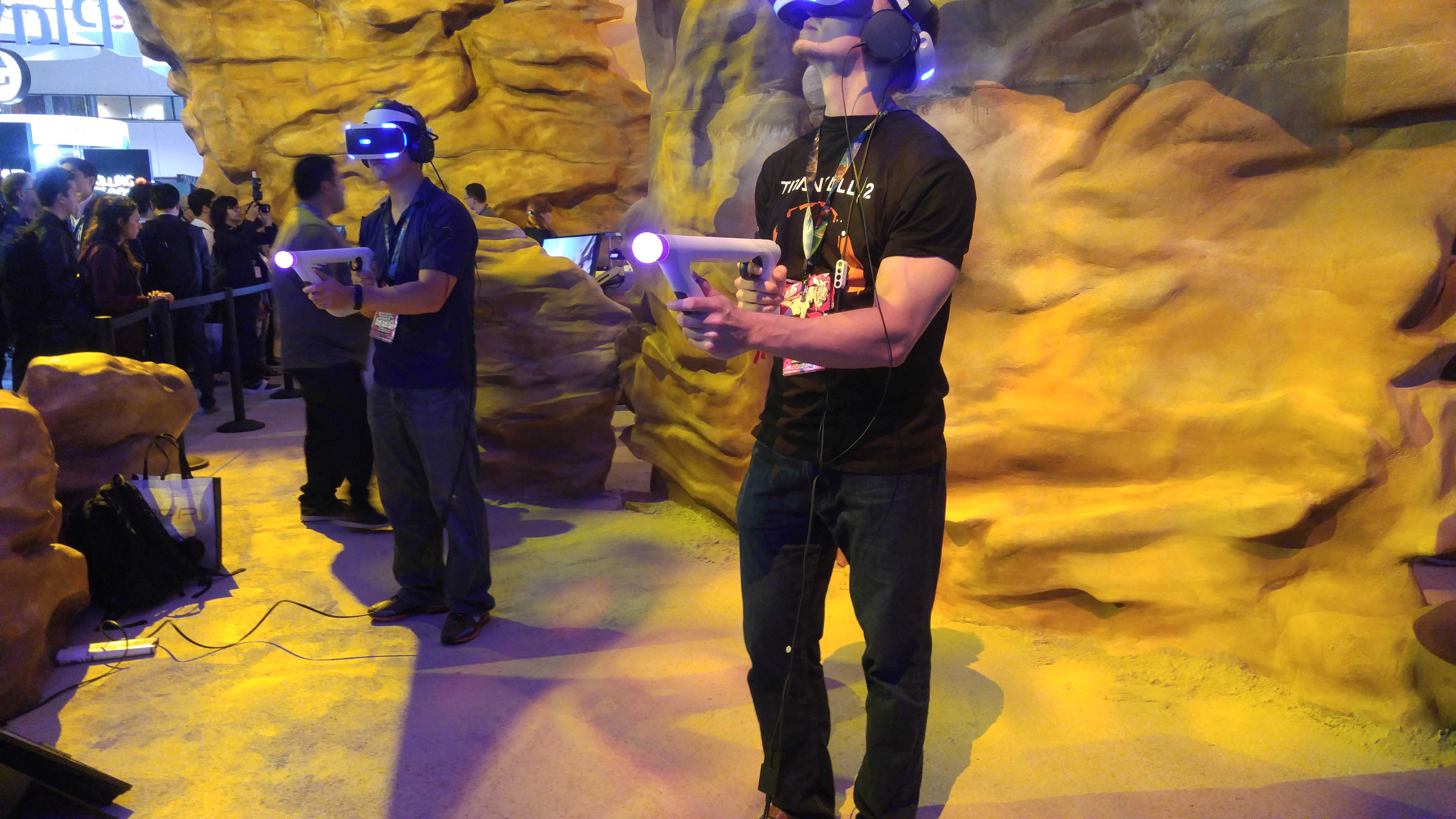 The demo ended in a predictable tease with a great big baddie that I was not allowed to fight. I'm left now wondering if Sony will bring both 'Farpoint' and the PS AIM to market. The dependence on new hardware would make this a niche within a niche, but it's also not something I've seen from the major VR competitors. It's very game-like, but that seems to be Sony's goal. The headset hardware has a real edge in terms of ergonomics, with both the screen and fit just working well. The headset demos well, and it's really reached a zenith when I think of the last two years of PlayStation VR demos I've done.