'Call of Duty' continues to be one of the biggest franchises in all of media, and you don't get to that place without some very opinionated fans. These fans understand many of the nuances between the 'Black Ops' franchise of Treyarch make and the 'Modern Warfare' installments, but ever since the initial reveal of 'Call of Duty: Black Ops III,' players have wanted to know how it stacked up against 'Call of Duty: Advanced Warfare.' After getting hands on with the multiplayer on the PS4, my answer would be, forget much of what you know, this is clearly Treyarch's game.

If you've ever played or watched Call of Duty at an above casual level, you are aware of those moments when a skilled player takes down another at that precise moment of opportunity, when the map aligns, when the elevations is there, that windows opens for the very skilled and they take advantage. 'Black Ops III' wants to bring more of those moments to more people, and to do so, Treyarch has attacked the combat design with a philosophy that says guns up and ready. 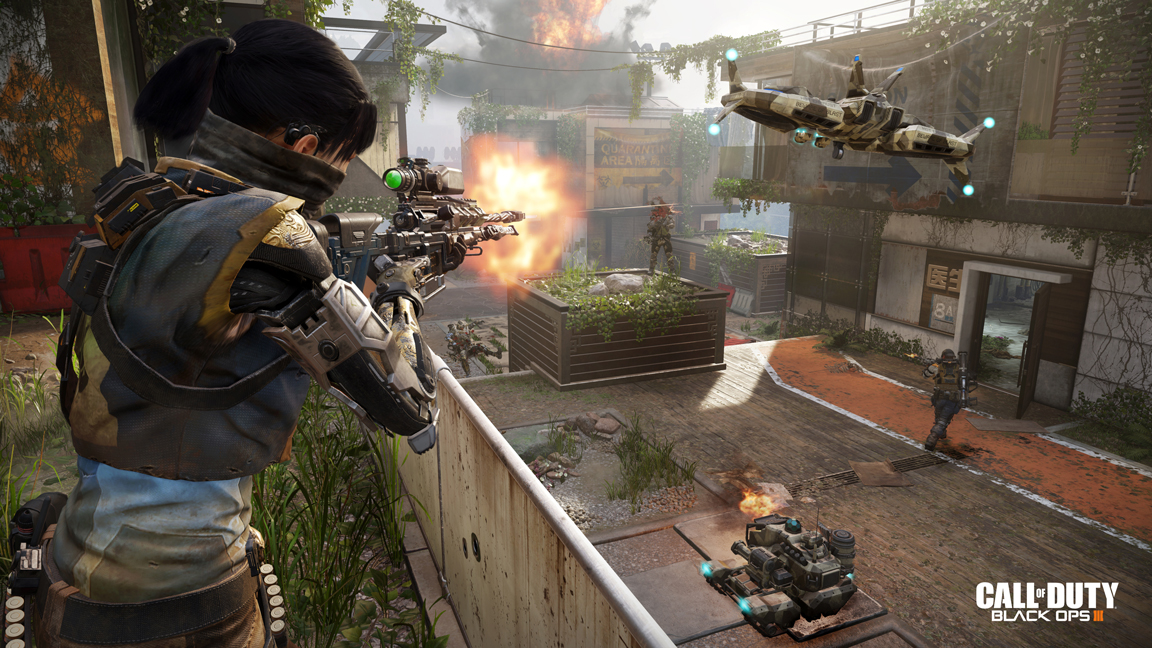 What this means is that, the new ways to move, from wall running, to traversal mantling, sprinting, swimming (yes, even in multiplayer) and boosting and ledge grabbing, are nearly always letting the players keep their weapons up and usable and letting players chain these moves together. This is like parkour combat, and the levels are packed with areas that feature not a parkour escape, but more of a half pipe to either keep moving along a lane or to make an attack from.

For a player like me, that tends to chuck grenades and run away, this fast, precision-based move set is intimidating, but I found out very quickly that even at this point in development (pre-Alpha) the moves feel good, and the maps encourage smart use while still providing the classic thrill of the respective game modes.

Of course, what also helped me was the new Specialist classes. Sure, anyone can down dive in and customize their guns at the Gunsmith to an insane five piece, three sides, 60 layer paint scheme, but I'm more taken by the personality and characterization of the specialist classes.

Each specialist has a special weapon and ability which is chosen at the start, and then builds up towards deployable. To me it's something like the supers in 'Destiny,' a special move that builds as long as I'm playing, and isn't to be wasted. (It's deployed using L1 and R1 together.) Unlike 'Destiny' however, the specialist abilities require more skill to use, and don't do anything to buff health (except that one heath restore ability).

These specialists seem to be drawn from other media, like the Nomad who looks every bit of 'Lone Survivor' and can incite a hive based attack (or alternatively, can comeback from near death). I of course was drawn to the Reaper (who looks like Legion from 'Mass Effect'). The Reaper can use Psychosis to trick opponents (think the hologram in 'Total Recall'), but I elected instead to use the Scythe ability, which meant that part way through the match, my arm turned into a chain gun, and for a brief amount of time, I mowed down the opposition. 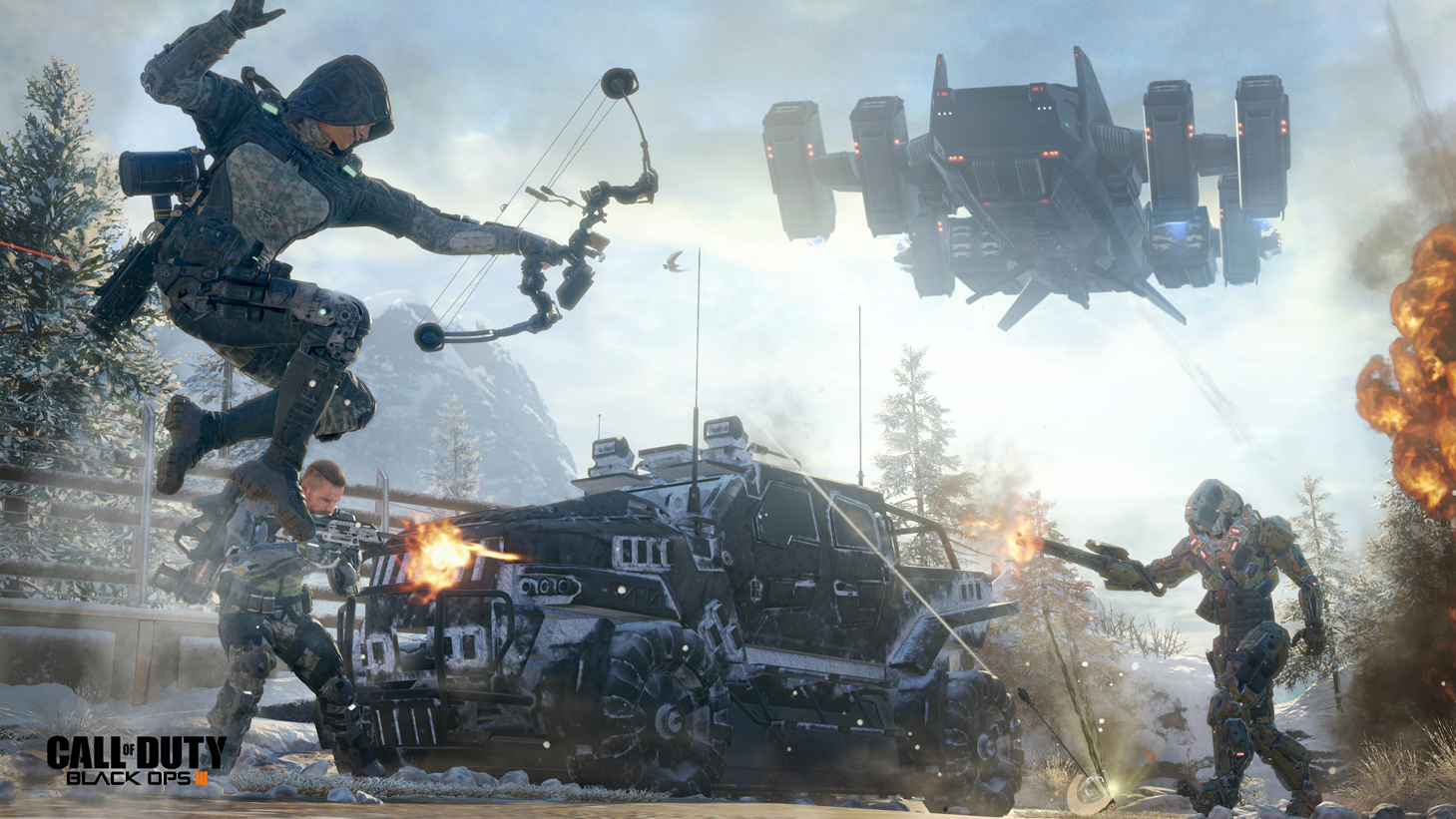 Had I been plugged when I first opened my arm, I would have wasted it. Instead, I focused in and picked up three quick kills (love that mini gun). Now if I can get the hand of chaining together all the quick traversal moves (I'm good with the boost jumping, but it's the three chained wall run I want), I'll be on my way to getting decent at 'Blops III.'

The Specialists are meant to make the multiplayer experience have more story in it, and I love that, since so far the specialists have all been interesting. (More me than the crazy Gunsmith). And yet, when you see chain lightening take down one player, and then two nearby flanking teammates, I have to wonder how it will change high level 'Call of Duty' play. I'm used to seeing players gang up in tournament play, though I suppose top players will always keep in mind the pre-match choices of their adversaries, and know not to bunch up against chain lightening.

Plus, deploying once or twice a match doesn't remove that basic thrill of multiplayer, first person gunplay, but things ground pounds do make potential threats around the map greater. 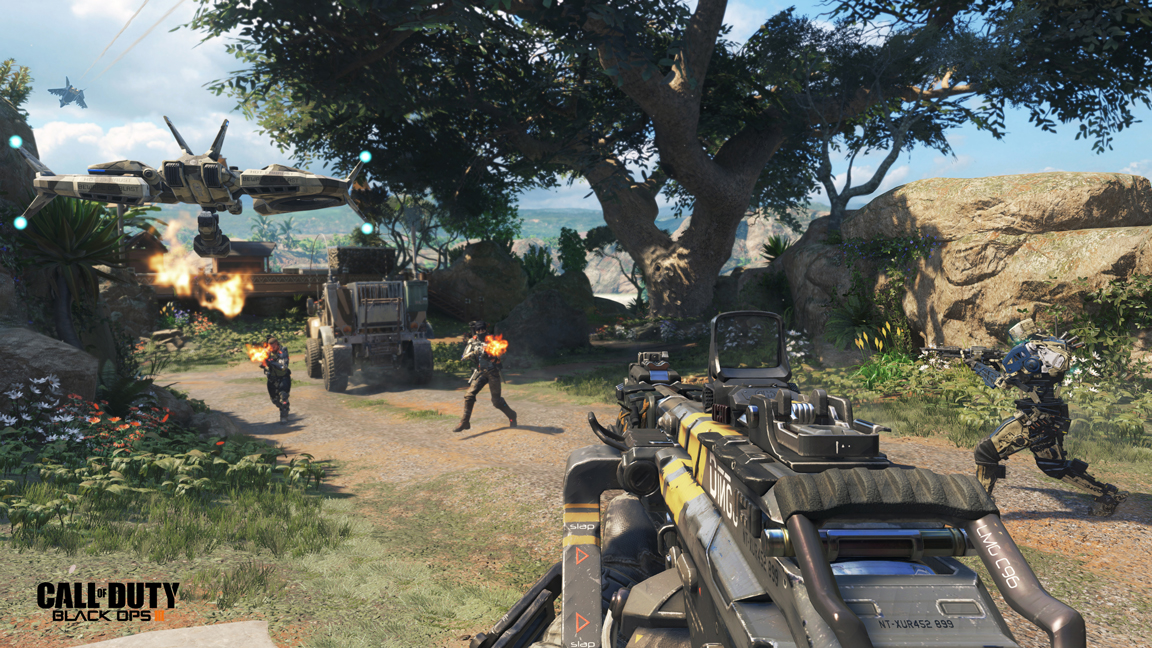 At any rate, though 'Black Ops III' uses some of stick movements seen in 'Advanced Warfare,' there seems to be much more precision involved here. Boosting and wall running willy nilly will leave players open to falling off the map and being an easy airborne target (broadside of the barn so to speak). Boost jumping is not like boost grapple at all, but it's the map design that makes it so much fun (and maybe even natural) to use.

And that's just it I guess. Treyarch wanted swimming, but with full combat options. That feeds into the natural state of multiplayer play. There's more to come, but the direction is clear, skill is rewarded. Guns up.