Just a Few Hours Into 'LEGO Dimensions,' And the Paywalls Are Killing Me

I've had the PS4 version of 'LEGO Dimensions' Starter kit with me for a few days, and it's not going great. First off, I floundered around putting the Batmobile together on my own, even though the instructions are in the game itself.

Oddly enough, the LEGO piece part of the portal, which I'm afraid to assemble lest it wind up in a hundred pieces spread around my office, has instructions in the accompanying instruction book and in the game.

Booting up the game for the first time, I was hit with a 5.412GB update. Without which, the game was offline (and lacking in Level Pack support). 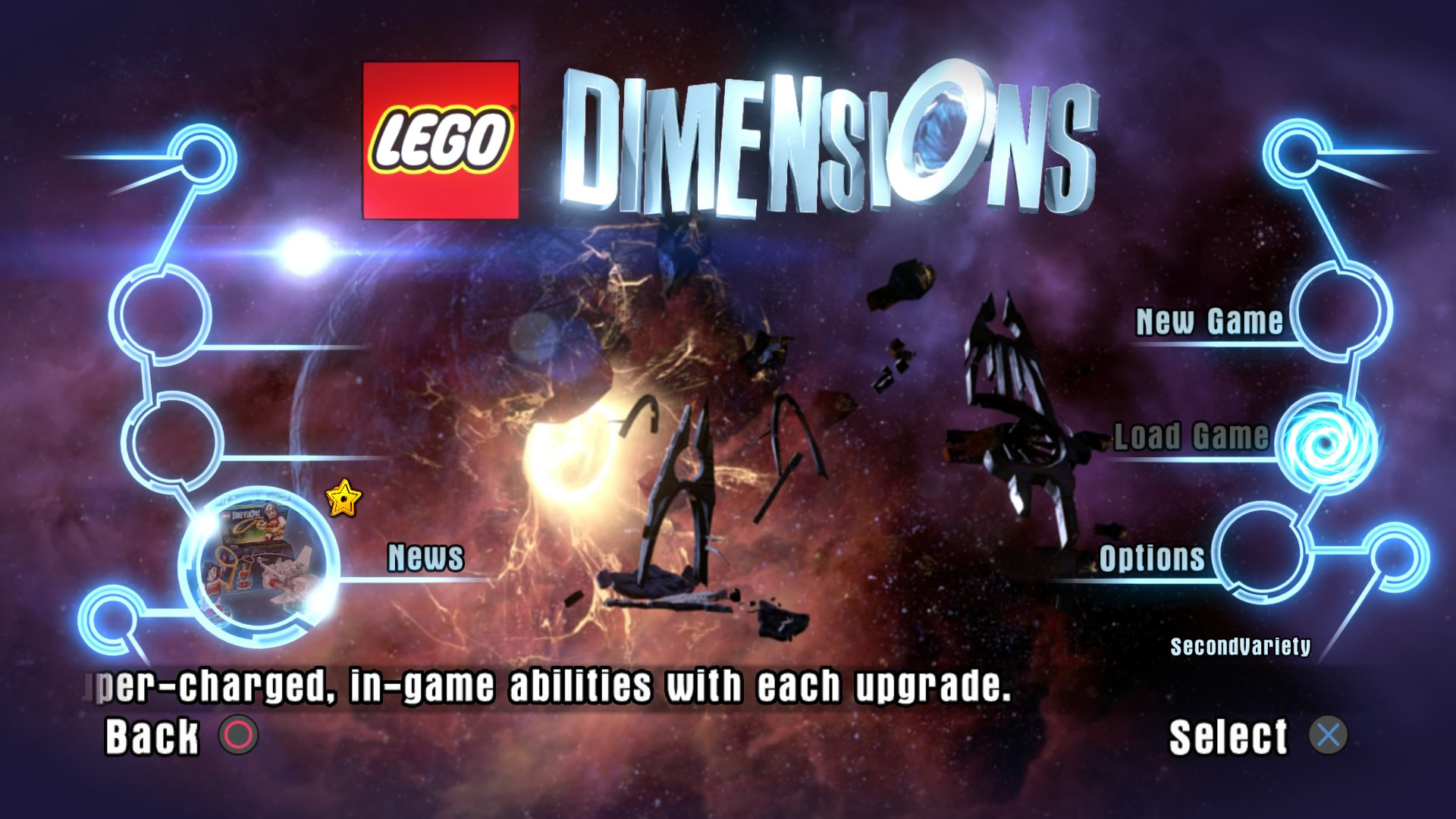 Due to this update, I had to sit through the game's intro movie twice. Without spoiling much, the intro movie appears to hail from the fun and creative 'LEGO Worlds,' where the world is built from virtual LEGOs and 'Minecraft' like exploration is encouraged.

Past the intro movie, and the game begins. Well, it sort of begins. There are a lot of cutscenes. At first, it's just cutscenes and LEGO building instruction manuals. 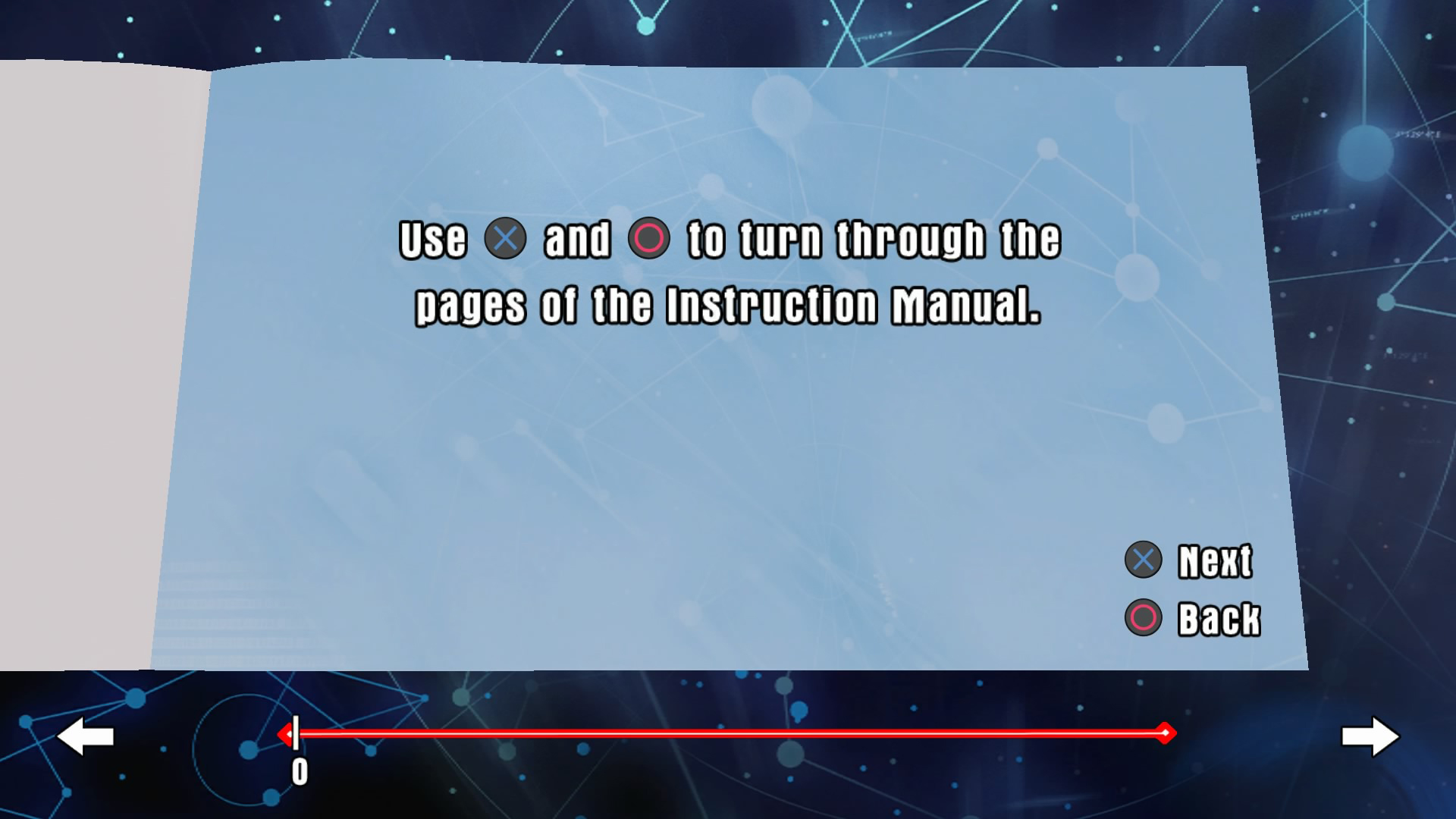 Past that, however, and the game settles in.

Here's where things start to break bad. The game is pretty funny. If you liked Batman and WildStyle from 'The LEGO Movie,' they are just as funny here. If you liked playing as WyldStyle in 'The LEGO Movie Videogame,' then get ready for more. (Complete with the jump wall power.)

That's part of the key issue for me. If you have ever played one of Traveller's Tales 'LEGO' games, then it might feel like you've already played 'LEGO Dimensions.' This is especially true for more recent 'LEGO' games. One plus is that 'LEGO Dimensions' has an original story, but so far, that cutscene heavy story feels like a mash-up. (As an aside, these characters repeat one-liners endlessly. One tiny Lois Lane quest has her saying the same lines about thugs over and over.)

The problem for veteran 'LEGO' game players doesn't end with the familiar. I'm playing with the $99.99 starter kit, which means I have Batman, WyldStyle, and Gandalf at my disposal. I also have the Batmobile, but all it has been good for so far is driving through flowers and up a few boost ramps. Naturally, those three characters each have their own important ability (grappling hook/batarang, acrobatic jump/relic detector, able to move some things with magic). But at every turn, I run into something my characters can't handle, and the nuance is dizzying. Gold obstacles are different from silver obstacles, tech obstacle are different from science obstacles, cracked obstacles are different from drillbit obstacles, etc. 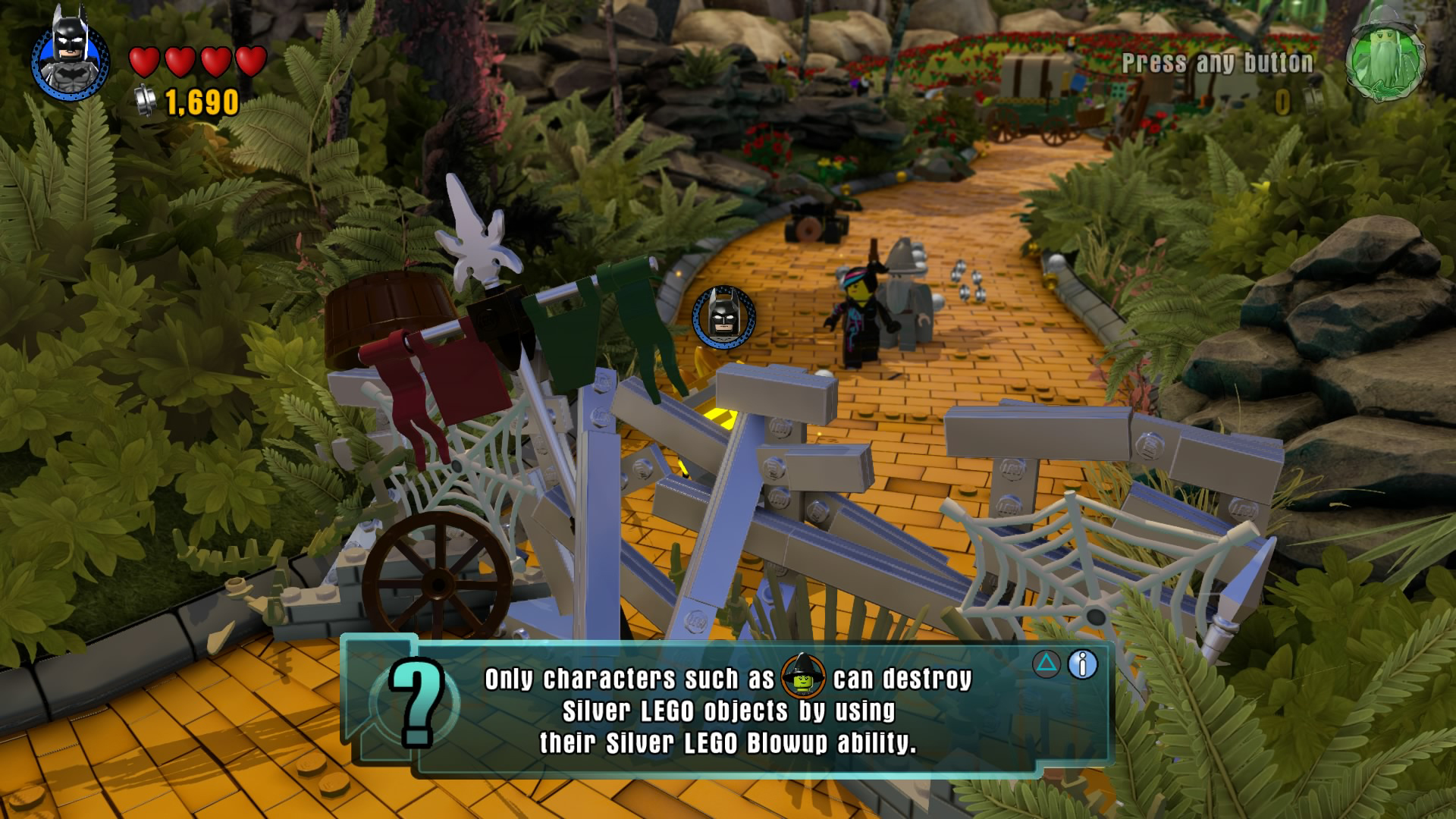 This is an extreme version of what has been in each of the 'LEGO' games. The problem is that I have little expectation of getting past most of these barriers. The few I've managed to bypass have been followed up immediately by a different obstacle.

To help keep it all straight, the game pops up a question mark block each time I encounter an obstacle I can't get through. The dialog will show me a list of characters with the needed power, and give me a preview should I want to order the pack containing them. 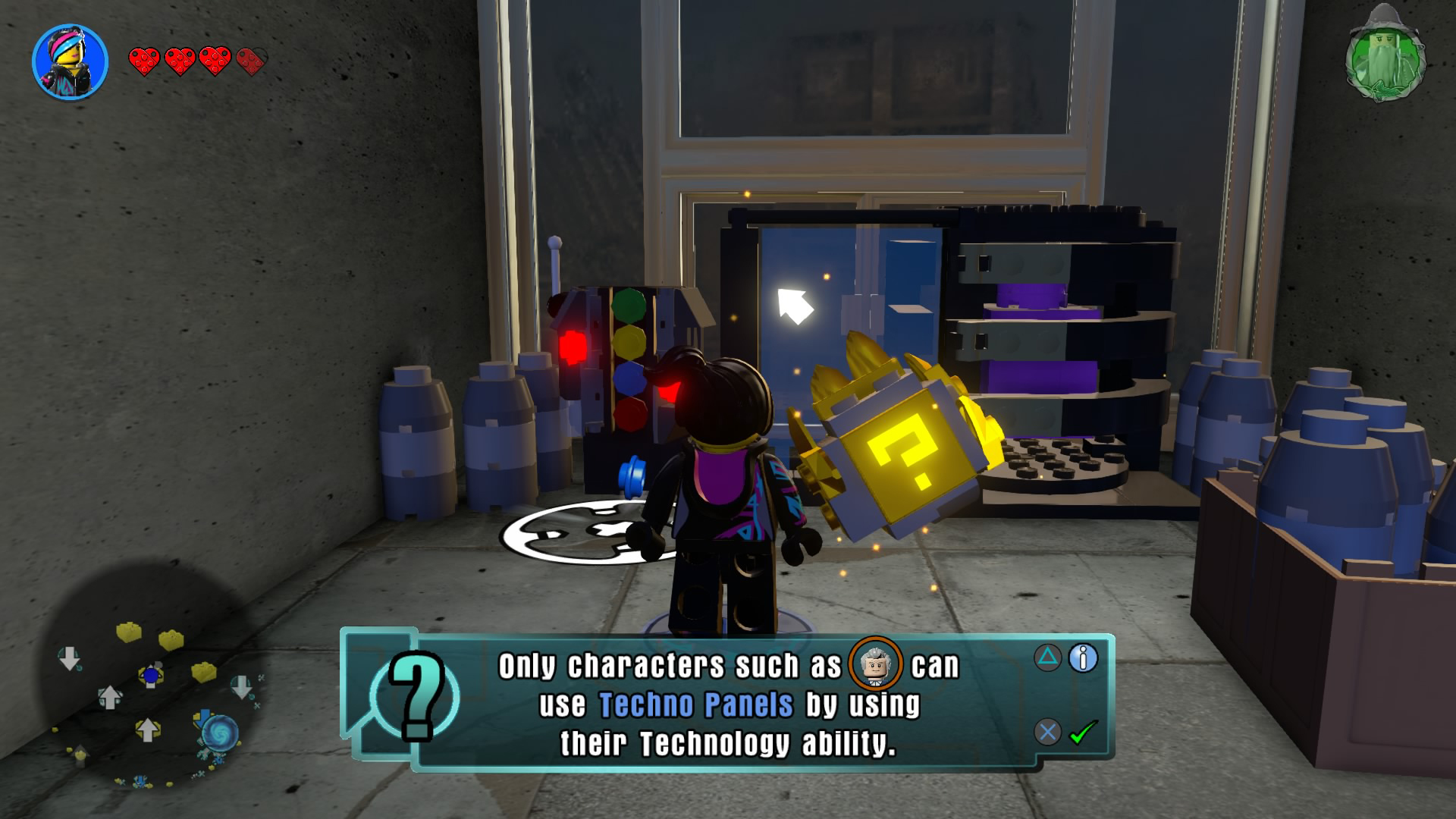 Obviously, this is a toys to life game, and it can't go for long without reaching for my wallet. Coming from other 'LEGO' games though, it's a harsh reality. Even coming fresh off of 'Skylanders SuperChargers,' where the starter kit, a boat, and a plane vehicle, (roughly a $100 in all) will grant access to everything in the campaign levels, 'Dimensions' seems stingy.

The toy pad mechanics are there. Every time there is a pink aura in an area, WyldStyle needs to be moved to a different spot on the toy pad. Doing so activates her Relic Detector ability, which usually uncovers a breakable or another obstacle. Considering what the same developer did in 'LEGO City Undercover,' this all feels pretty vanilla.

And then there is the Adventure mode. It's a whole area of portals to particular character worlds. There's 'Scooby Doo' world and 'Back to the Future' world, and so on. 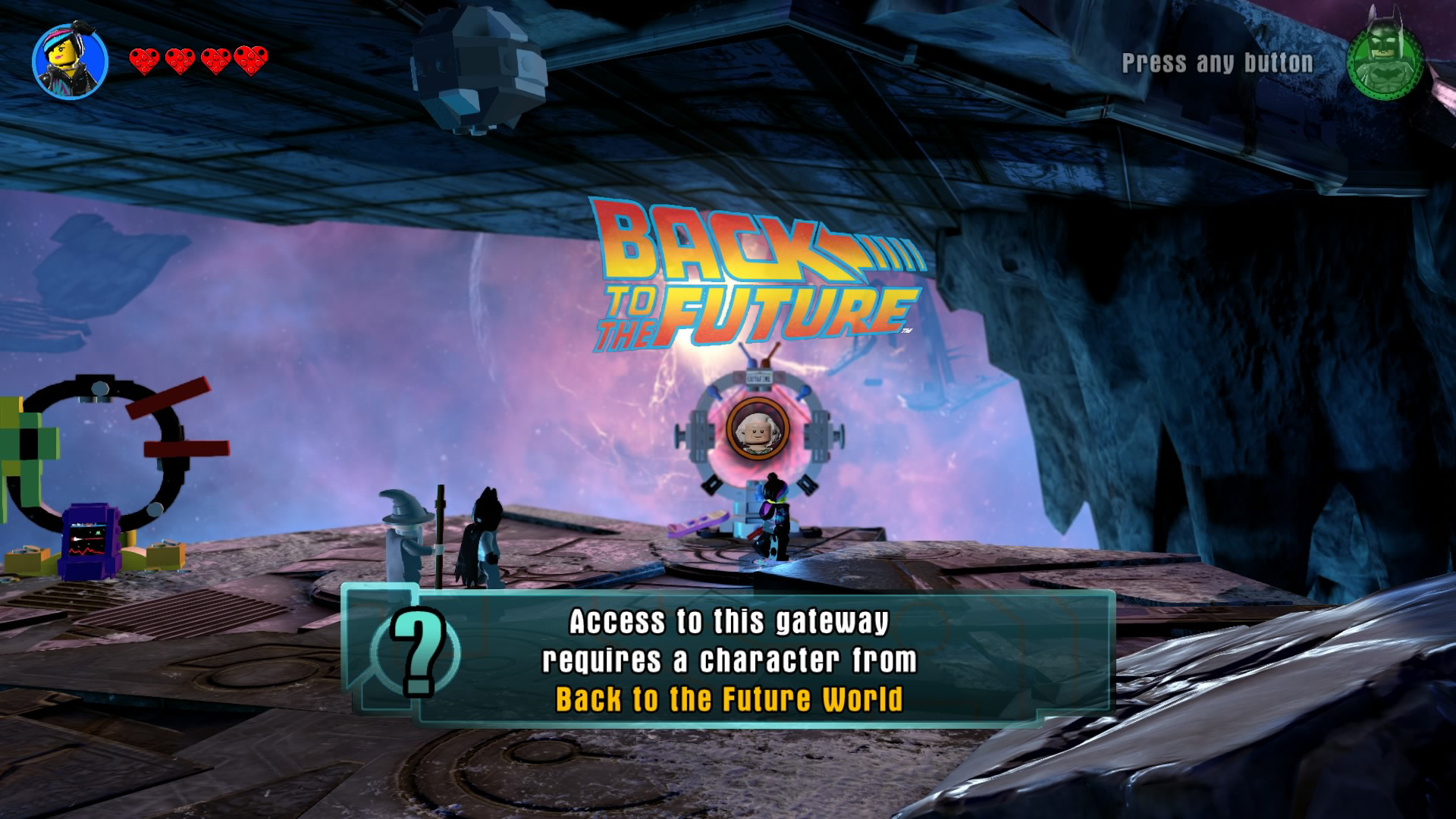 Since I only bought at the $100 level, this area seemed pretty pointless, but I did find three worlds I could go to, DC Comics world, 'The LEGO Movie' world, and 'The Lord of the Rings.'

It's pretty fitting that I can access these worlds, considering that I've done so in multiple other 'LEGO' games already. Anyways, what is called 'DC Comics World' is actually a combination of Gotham and Metropolis. Even the Flash, who I managed to find but was not allowed to become, seems to think he hails from Metropolis.

As happy as I was that I could access an Adventure Mode world, the fun was gone so fast, I almost was ready to quit the game altogether. As with the other Adventure Mode worlds I tried, DC Comics World is like an unfinished level. There are few to no enemies, and it's just one ok-sized open area. Basically, there appear to be a dozen quests sprinkled about, most of which I couldn't do because of having only a few characters. When I talked to the Flash, he had me follow him, and we beat up a few enemies, which yielded me a gold brick. Then the Flash left. Later on, I found Lois Lane and Jimmy Olsen. She had me follow her while she talked about Metropolis and Gotham being thrown together. Following Lois, I had to beat up the same enemies as I did with the Flash. Then I got a gold brick.

Nearly all other quests I tried were just sad. I climbed up the LutherCorp building using a special WyldStyle path only to find that I needed a Laser character to go further. I paid 90,000 studs to fix the Arctic World, which unlocked some frozen platforms that I couldn't access. 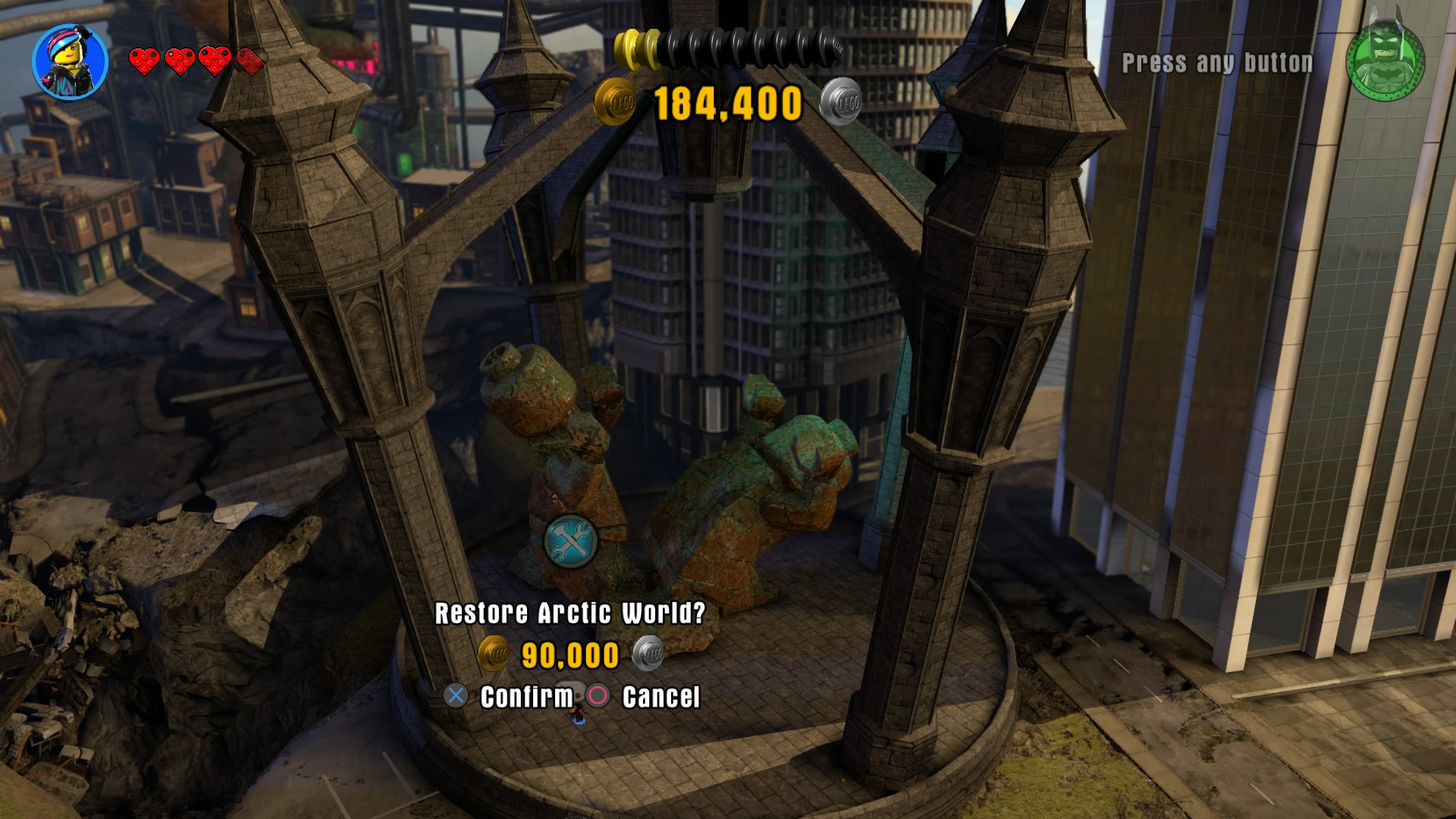 Other excursions proved just as fruitless. Every time I felt like I was able to get through an obstacle, say using WyldStyle's double jump on the rough level design, I almost always hit another impassible obstacle that requires another ability, but not much else. I hope that further play (I plan to bear on) loosens up the game's tight shackles, but I recommend staying clear of the Adventure Mode early on.

Also, though the Batmobile is pretty worthless so far, (it's a tiny car without any weapons or Batmobile like abilities,) it does get stuck in the rough level geometry quite often. Sometimes it can be driven out, but often it's better just to take it off the toy pad and put it back on, it will then appear in game in a safe spot. Somehow, I got Batman stuck in floor, but the same off the toy pad, on the toy pad, technique restored him.

I suspect 'LEGO Dimensions' will get better, it has to. The delight I felt putting the Batmobile in for the first time seems like a one-off. Indeed, the 'Dimensions' franchise could be one the biggest things going in a year or two. For myself, I wanted to get my impressions down now in the hopes of exorcising my frustration in route to enjoying what the game does well, mashing up different properties with TT Games signature gameplay and humor. 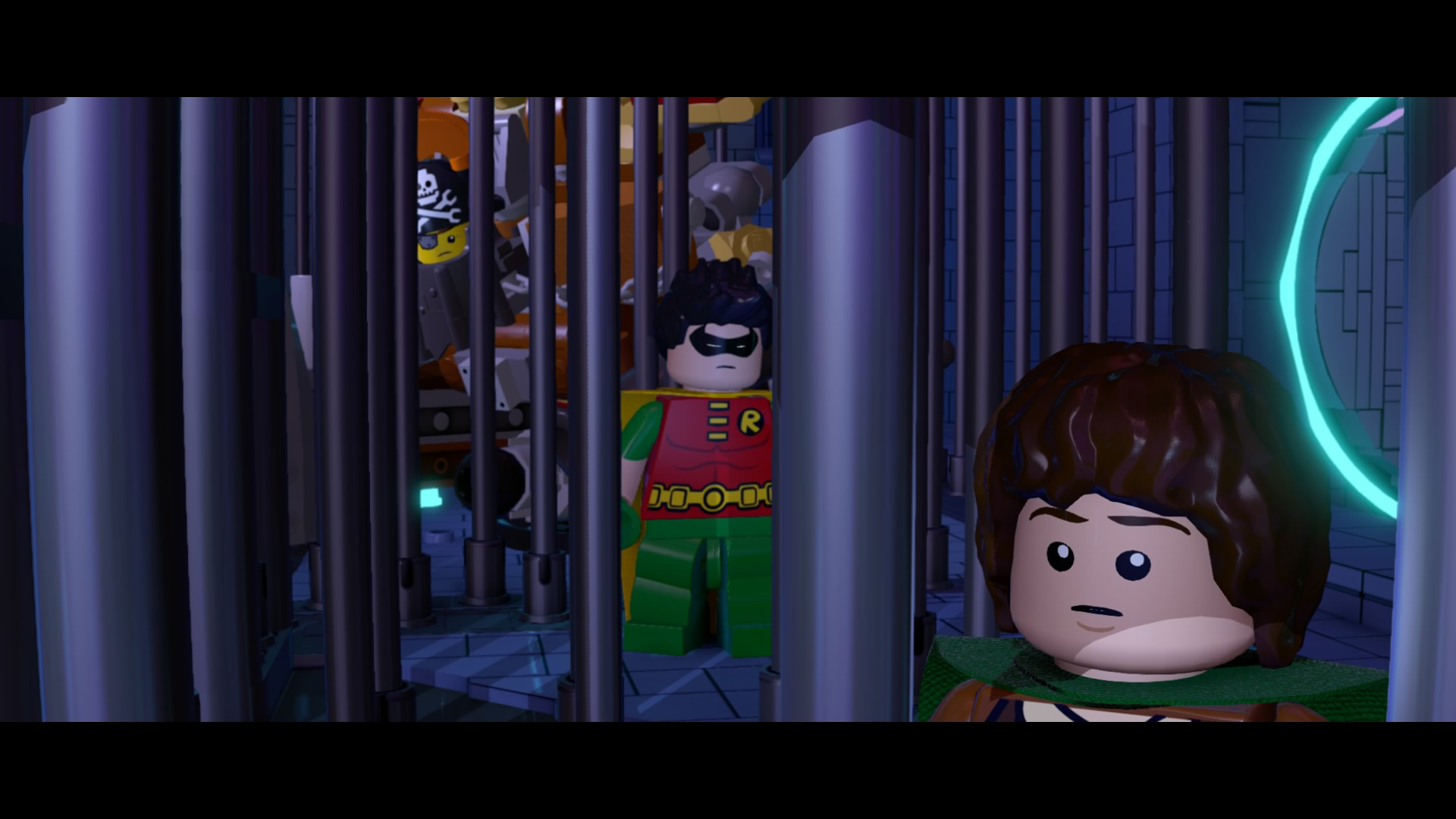