Getting Hands-On: 'LEGO Dimensions' Introduces Something New As Some of Our Favorite Characters Crossover

'LEGO Dimenions': a nerdgasm without equal.

Editor's Note: Warner Bros. invited High-Def Digest to the WB headquarters in Amsterdam, and our intrepid Belgian writer, Julian De Backer, made the pilgrimage over.

Four years ago, Activision found a license to print money and distill solid gold with its 'Skylanders' franchise and the toy-to-life concept, in which extra characters and content are unlocked by placing collectible figurines on a portal. In Dutch, there's a saying 'Goed voorbeeld doet goed volgen', which can be roughly translated as 'example is better than precept'. If it ain't broke, don't fix it (unless you're Jim Steinman, then by all means, go ahead and break it). As such, other companies have attempted to emulate Activision's success. 'Disney Infinity' is currently in its third outing with a slew of 'Star Wars' characters, and Nintendo has followed its own idiosyncratic course (because that's the way the boys from Kyoto roll) with 'amiibo' – no portal per sé, but still a NFC way to turn collectible figures interactive or at least, to enhance certain games on the Wii U and 3DS.

On-deck in the toys-to-life segment, is Traveller's Tales' 'LEGO Dimensions', which will be released for all major platforms on September 27th (America) and September 29th (Europe). My journey to test out the new license-packed franchise took me to the Warner Bros. headquarters in Amsterdam, the capital of The Netherlands.

The office was a treat for fans, with posters on all walls, a mini-Hogwarts as entrance decoration, and even a 'Batman v Superman' teaser billboard. Best of all, I could park my 'GOONIES' car on an official Warner Bros. parking lot. That's synergy, folks.

After a one-hour presentation-turned-play session, the game looks to be the most promising and exciting of the 'collectible character'-subgenre yet. While the eventual full review will spill all the beans, so far, it seems TT Games have attacked the idea of bringing toys into a game with a gusto and a freshness.

Effortlessly combining at least 14 franchises for a smorgasbord of crazy adventures, 'LEGO Dimensions' is a nerdgasm without equal. Batman in the DeLorean? Peter Venkman in the Batmobile? Gandalf on the hoverboard? This and more is both possible and encouraged. (As for any limitations, it's all very "where we're going, we don't need limits.") If I could have had this game when I was a kid, it would have blown my mind multiple times in a row. In fact, I might not have recovered from having my mind blown that many times. You can even have 7 Marty McFlys at once on the same screen, should you so desire - and should you have the cash to buy 7 Martys. 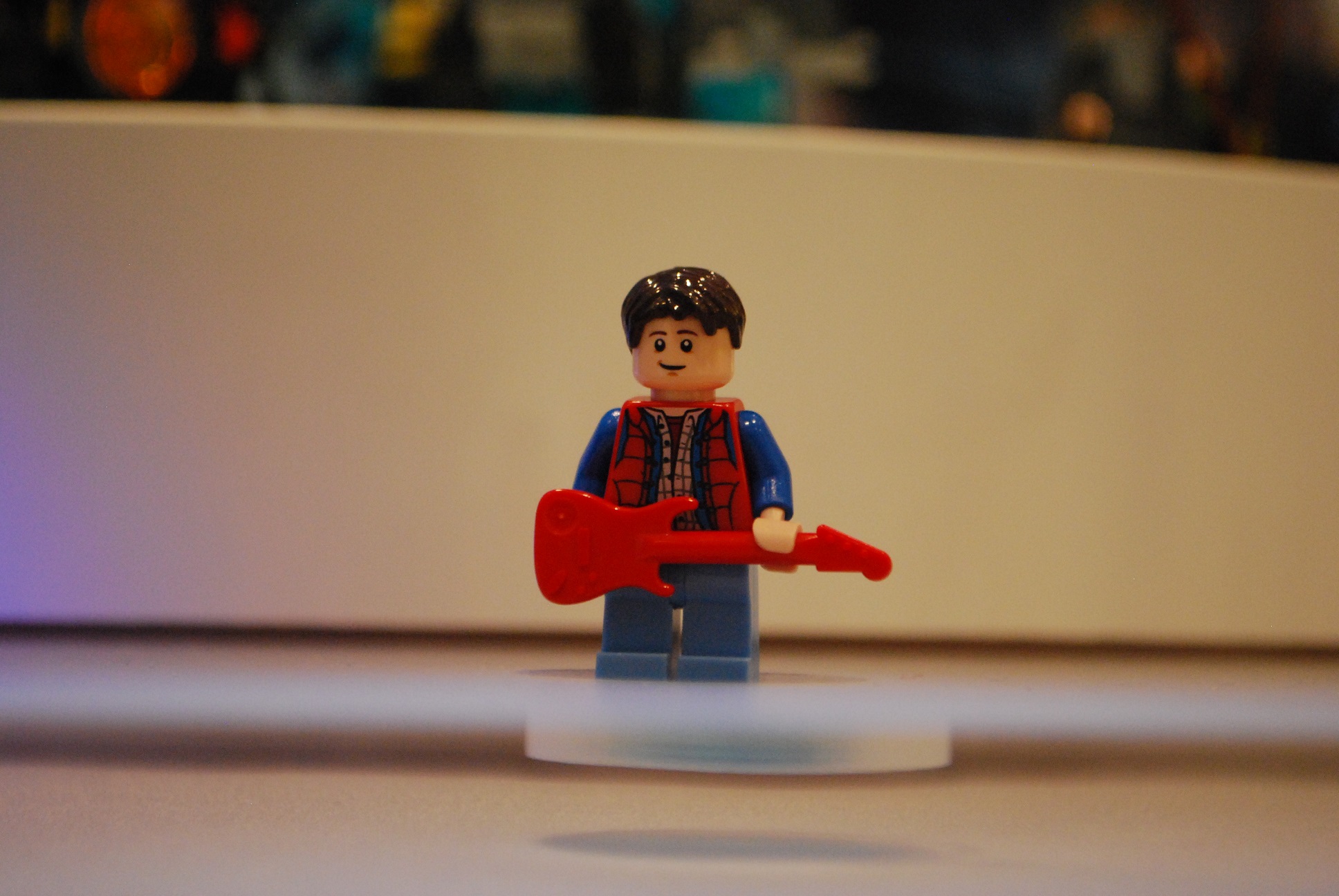 The attention to geeky detail is extremely stunning. James Burgon and Mark White of Traveller's Tales showcased this with a 'Doctor Who' example. Now it needs to be said that I know next to nothing about the good doctor. I do know that there are currently 12 iterations of the character, and that he uses a device called the Tardis that's said to be bigger on the inside. True enough, once you enter said Tardis, everything's bigger on the inside. Should you then change from the 12th Doctor (Peter Capaldi) to the very first from 1963 (William Hartnell), the screen turns black and white, because that's how the old episodes were broadcast on the BBC. On top of that, the background is composed of one realistic piece of furniture, accompanied by mostly cheap-looking cardboard. Because, as Burgon stated, the BBC didn't have enough money for 100% realistic sets back then. 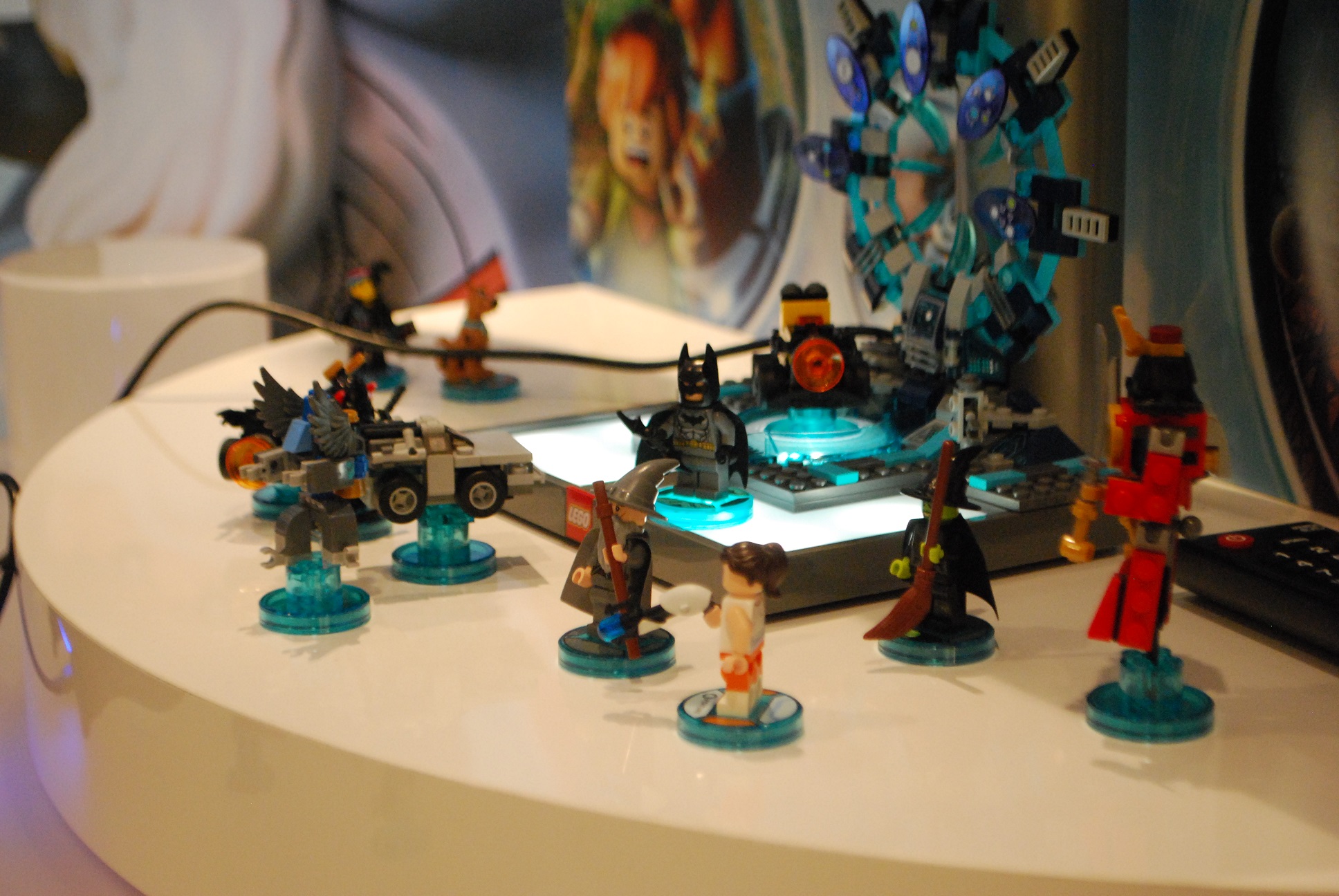 Another example? Drop down from the land of Oz (yes, Judy Garland is featured as a LEGO minifigure; I wonder how proud Liza Minelli is now) and you'll end up in ... Kansas, in appropriate sepia tones. (Just wait until Batman runs into the brainless Scarecrow of Oz.) One more example? The DC Batman is voiced by Kevin Conroy, while the LEGO Movie Batman is voiced by Will Arnett. And they're both playable, at the same time. Clash of the Batmen? Only in 'LEGO Dimensions'.

Of course, there is the toy side. It's more than just a mash-up of minifigs. What isn't obvious about 'LEGO' Dimensions' for many is how hands-on the gameplay is. What I mean is that while the 'LEGO Dimensions' Toy Pad is used for scanning in 'LEGO Dimensions' minifigs and vehicles, the gameplay leverages this unique for the genre portal design. The toy pad supports seven figures at a time (thus the 7 Martys). One of those can be vehicle, and the vehicles can be rebuilt into different versions.

So there's multiple figures and a re-buildable vehicle on the Toy Pad, but more than that, the different parts of the Toy Pad are used in gameplay. 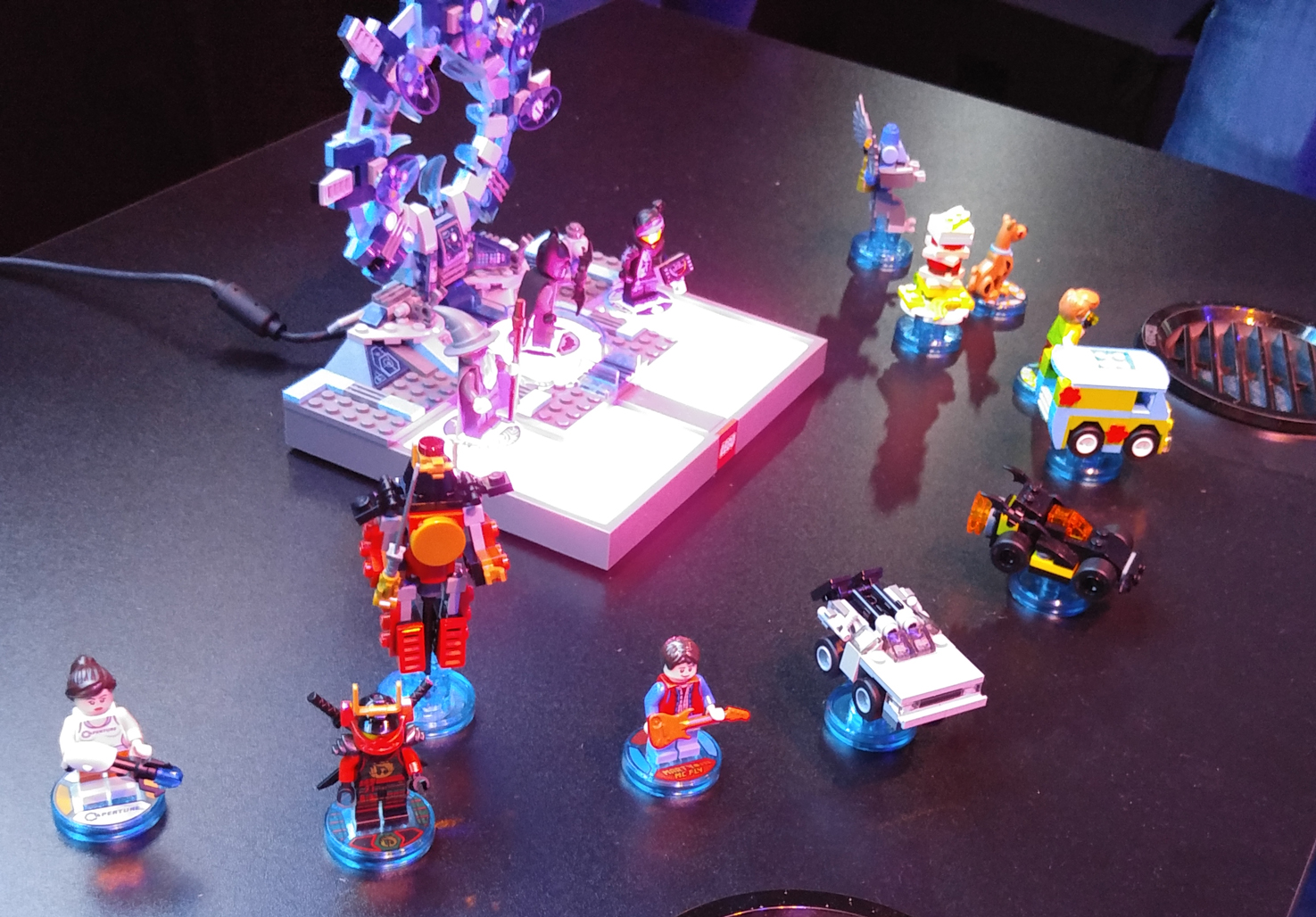 For example, some puzzles require that figures, like say Gandalf, shrink or grow big to get past obstacles. For the player, moving the figure from the left side of the toy pad to the right (and back) will make the shrinking and enlarging happen. This might seem like a simple mechanic, but it's used creatively all over the game (Batman gets frozen in place by a zap from the Wicked Witch of the West? He can be freed by moving to a different part of the Toy Pad).

The mechanics mean that the Toy Pad is for more than just changing characters, and really help sell that I'm using my toys in my game feeling. 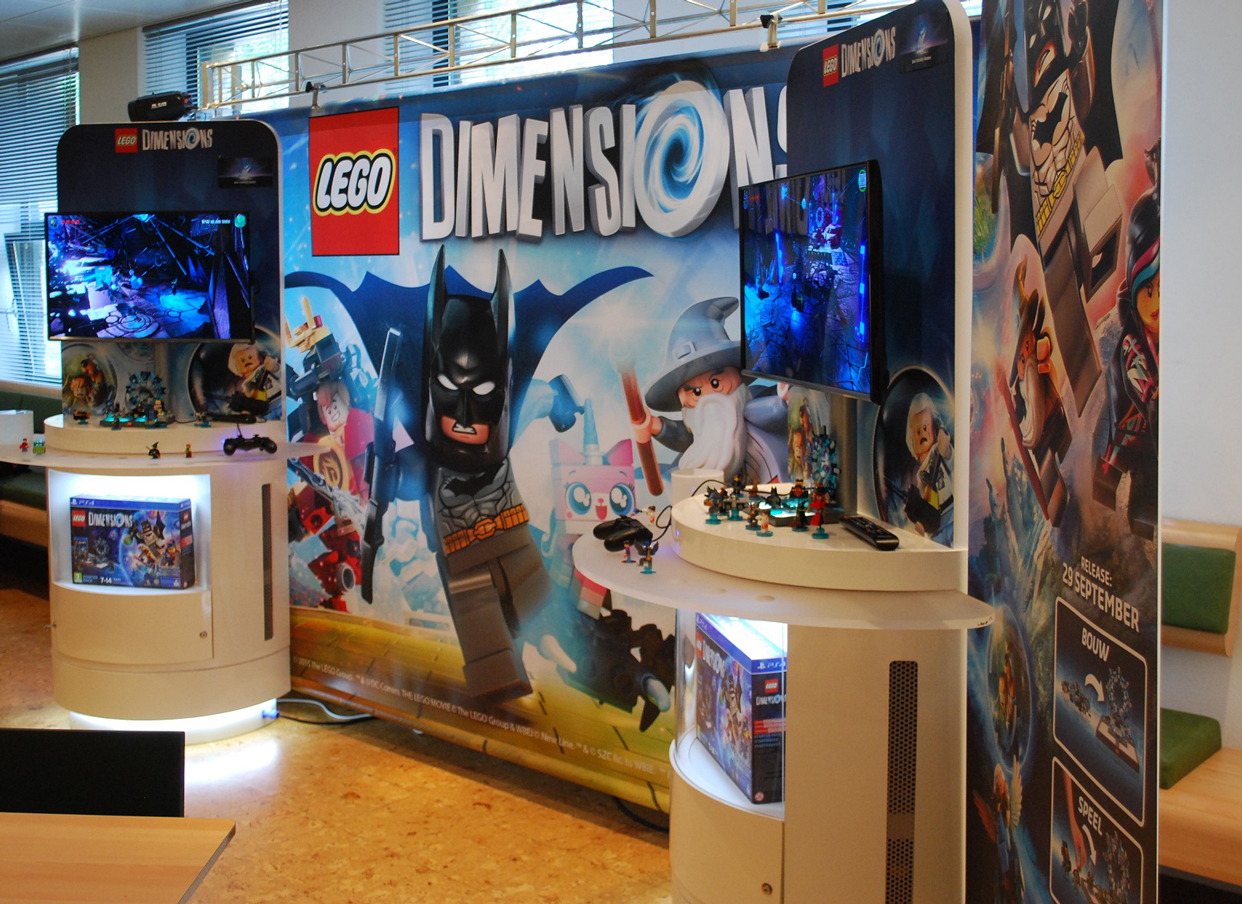 After the play session, I sat down with the two English chaps for a short interview.

High-Def Digest: "LEGO is my favorite toy from my childhood, and 'Back to the Future' is my favorite movie of all time, so one has to wonder: how much more can a concept be considered 'shut up and take my money'?"

James Burgon: "Hahaha, that's the question, right? We just hope, in the end, that everyone loves it and enjoys it. There's so many brands in there, from nostalgic ones like 'Back to the Future' and 'Ghostbusters' to new ones like 'Ninjago'. Seeing them in the same environment, and all working together, is just amazing."

High-Def Digest: "There's FOX with 'The Simpsons', Universal with 'Back to the Future', Sony with 'Ghostbusters', 'The Wizard of Oz' from Warner Bros. ... those are all colleagues, but also rivals. Was it difficult to convince them for this shared media venture?"

Burgon: "We'd like to think 'The LEGO Movie' sort of helped to push that in the right direction. When kids play with LEGO, they don't think about brands or firms, they just combine and mix it up. Sure, at first, some were hesitant, but once we showed them the new Toy Pad and the mechanics and how it pushed the boundaries with the physical LEGO product and the bricks to build incorporated into the gameplay, they really loved the idea and they wanted to be aboard."

High-Def Digest: "Can you give us a sneak peek of what to expect in the near future? Other famous franchises and brands?"

Burgon: "Currently, we've got a plan up until May 2016. Beyond that, we haven't put any though in, because there's so many. There's fourteen currently, and so much content to enjoy."

High-Def Digest: "If I can kindly make some suggestions?"

High-Def Digest: "I'd love 'The Blues Brothers'. It's Universal Studios, and they're already on board, so it shouldn't be difficult to convince them ..."

High-Def Digest: "'The Goonies', one of my favorites, and it's from Warner, so that shouldn't be difficult either. And maybe some 'Indiana Jones', because LEGO has already made the minifigures in the past. Think about it!"

High-Def Digest: "What's really loveable about 'LEGO Dimensions' is that it combines old and new. Kids nowadays probably won't know 'Ghostbusters' or 'Back to the Future' by heart, but their dads – our generation – will know those films. So kids can play with their dads, and with their grandfathers, who grew up with 'Doctor Who'."

Burgon: "That's exactly what we wanted to achieve. LEGO transcends all ages, and our games as well. Parents play it with their kids, we have teenagers that love our games, even young adults. It's great to be able to offer content for children – the 'Ninjago' cartoon is very successful, as is 'The LEGO Movie' – and for the dads, as a way to introduce dad's favorites to his offspring."

High-Def Digest: "And it couldn't have been more topical, because 'Back to the Future' is celebrating its 30 anniversary this year. There's even a cinematic reissue planned in some countries. The game is up to date, to the fullest extent."

Burgon: "We just went for the brands that we love. I'm a huge 'Ghostbusters' and 'Back to the Future' fan, so to actually have them in our game is just amazing."

High-Def Digest: "Is there a lot of pressure on you guys to live up to the standards set by 'Skylanders' or 'Disney Infinity'?"

Burgon: "The toy/game mash-up is still quite new and exciting, and people pestered us for years to make our own version. We wanted to make sure we had something that was really competitive and innovative. The mechanics of our toypad are quite something, because it functions like a second controller. We got the actual LEGO, where you need to physically build your portal. We really just wanted to take the world's number one toy and the games that we make, and mash them together to create something truly special."

High-Def Digest: "Thank you for your time. I'm looking forward to the full game. It's a dream come true for nerds like me. Congratulations. It looks very promising."