After dipping into some 30 or more new games during E3 week, last Friday saw me in some kind of video game hangover, basically catching my breathe. But by late Friday night I was jonesing for some top-tier gaming. Specifically, I wanted to play something new, something like one of the E3 titles I had played. As I thought about which games I would happily devour if I could (and there are some good choices), I realized that I desperately wished I could get in some more 'Gwent' matches.

I loved playing Gwent in 'The Witcher III.' Although I liked getting more cards and refining my deck, that wasn't the real hook. My Gwent matches were usually about pulling out late skin of my teeth victories, beating the computer's brains out, or else, getting immediate revenge after dropping a match or two.

But though I loved playing the computer, I wasn't sure it would translate well into playing against a human player. Surprisingly, that's just what CD Projekt RED had in mind with their E3 'Gwent' presentation. After going over some important details changes, they threw us into matches. 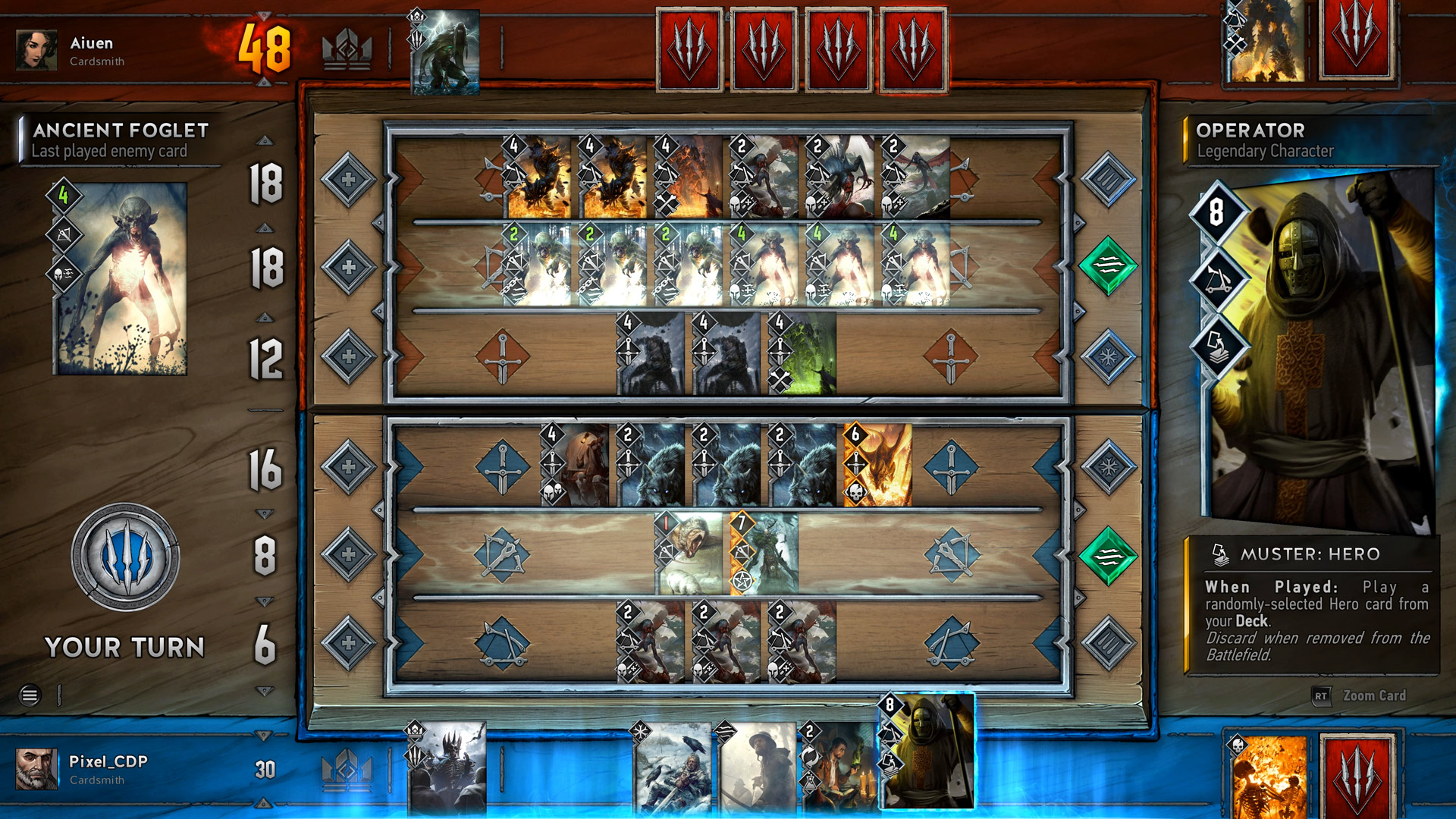 Yes, things have certainly changed in 'Gwent.' The whole presentation is more colorful and informative, and several moves, like say 'Scorch,' can be carefully previewed. The idea remains to win two rounds in a best of three round match. Playing on to back to back PCs, I managed to best my human opponent in four of six total rounds. That made me 2-0. In both cases, my opponent ran up big leads in first round before passing, which I seized upon. I did what I could to earn extra cards, going back into the graveyard, using the leader ability, throwing down spies on my opponent's side to start off matches, and using (or try to use) the cloning units to my advantage. When facing the monster deck, I was doubly hurt by a fog that handicapped my archers while buffing the enemy monsters. But with each mistake I made, or with each time his numbers seem insurmountable, I seemed to find to new avenues in my hand and in my deck.

I ended up conceding both second rounds. In the second match, it really was a concession as I didn't even really make him use that many cards to win (four for him to my three). That followed some excessive card use in the first round, but by the all-in third round, the match wound up being closer than my comfort level would have suggested. Winning close matches, however, has its own satisfaction. I would easily contend that the gameplay of 'Gwent' powers its undeniable charm, but the atmosphere of the parent series has imbued the card game with more than pretty illustrations. CD Projekt RED's 'The Witcher' RPG series is over, but by way of popular demand, the card game 'Gwent' will live on. As it was 'The Witcher III,' 'Gwent' is a collectible car game that features deck-building, factions, a graveyard, math, and more. This new stand-alone version is being remade to be more balanced, and that's because it features player versus player as well as player versus computer matches.

Here are some of the 'Gwent' trappings seen around E3: 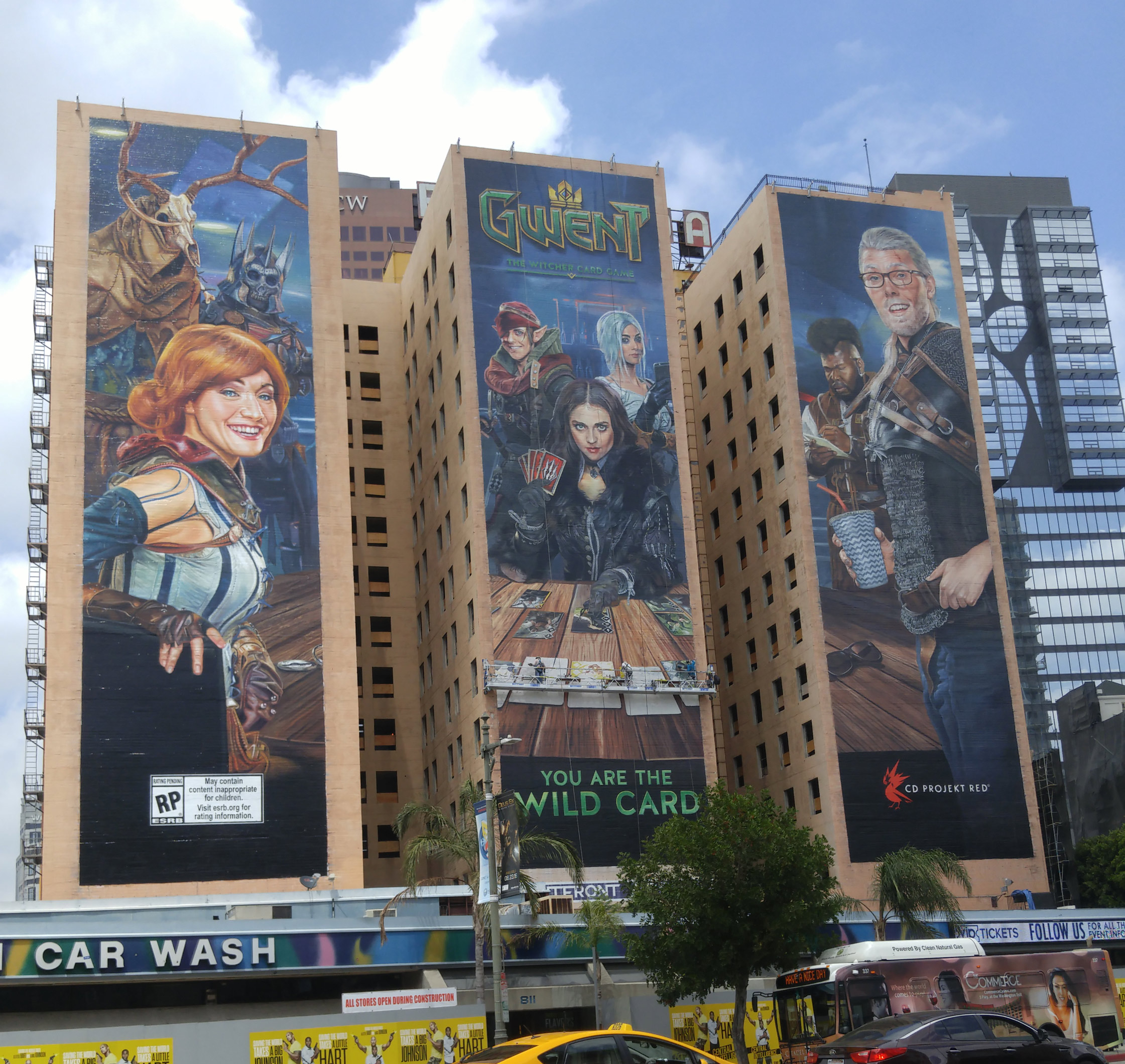 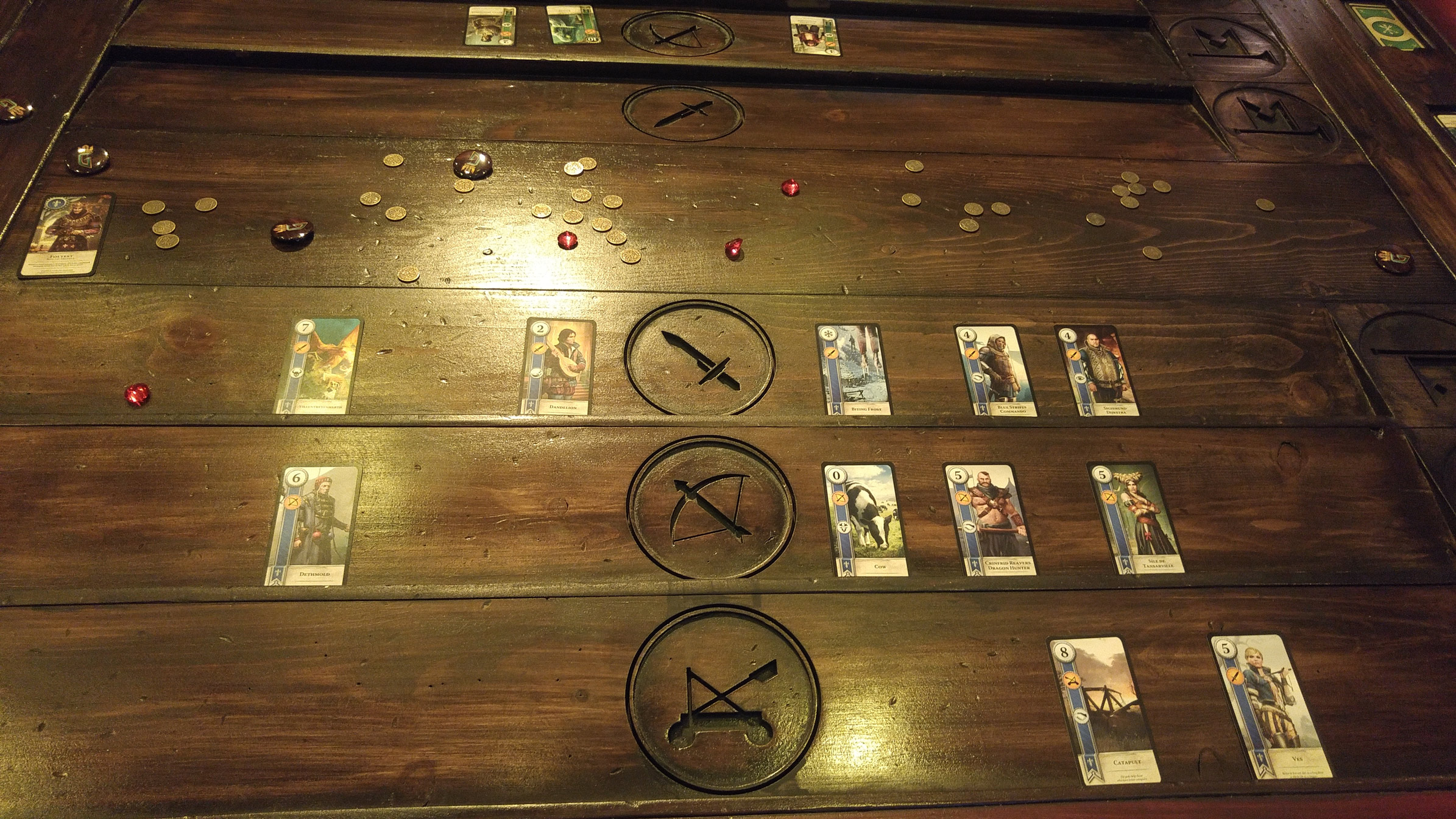 Developed in-house by CD Projekt RED, 'Gwent' is coming to the PC, Xbox One, and PS4. As of now, a closed beta for the Xbox One and PC is set for September, (sign up here).

And it's not just the 'Gwent' card game that is getting a second life, rather, several characters, places, and stories of 'The Witcher' universe will continue by way of special campaigns in this new 'Gwent' game.

That is the flip side of my experience. Normally, making a game free-to-play would have me stepping away, but I'm now desperate to get in so more human matches. Fortunately, there's more to it than just playing against others. 'Gwent' feature single-player campaigns. I got to see part of one such campaign at E3, and it had all the hallmarks of 'The Witcher' joy. Having partied up with some mercenaries under the leadership of Failbor, our heroes ventured into a wood, which was depicted on the navigable exploration map. (Players can go anywhere on the map, and a dotted line will keep them connected to the current quest objective.) In a lone cabin, in which signs of gorey violence are everywhere, the party finds a little girl named Torinna who seems to be a state a shock. In a hidden alcove, Geralt found 'Scorch' ("Have never heard of 'Scorch?') which was then added to the deck.

Later, after some other revelations, the creeped out girl turns out to be the very creepy Zaphire, who then player must then fight (via a 'Gwent' of course). Because these campaigns can be bought and played without any f2p hoops, and because they are steeped in both Witcher lore and Gwent gameplay, they are immediately attractive to me.

Just in case it isn't clear, these quests and campaigns are built around untold stories from 'The Witcher' universe. The campaigns are promised to be about ten hours in length and will cost money. The decks the players build in the campaigns do not translate to the competitive (or even casual match) side and vice versa. The game has four decks right now with a fifth planned to be ready by release. Players will get cards in packs, and those cards will be spread around the decks. Unwanted cards can be broken down and turned into new cards.

With great singleplayer and multiplayer components, 'Gwent' is poised to be a smashing success. This Best of E3 2016 title can't arrive soon enough, and by all indications, it will have some serious staying power.