It's Gamescom, and for Creative, that means it's time to unleash an all-new line of gaming-focused audio products.

The Sound BlasterX G5 is a 7.1 HD audio external USB sound card that includes a powerful headphone amp. To understand the seriousness of the product, one need look no further that the G5's SB-Axx1 audio processor, the same processor that forms of the core of $399.99 Sound Blaster X7 (review here). At $149.99, the Sound BlasterX G5 appears to be the sweet spot of USB sound cards, offering a high quality USB-DAC, multi-device support, a headphone amp, and 7.1 surround sound output. The G5 also carries its own USB host port. The G5 is due out in November.

Meanwhile, the Sound BlasterX H7 is clearly Creative's attempt to refine an over-ear headset by offering (in theory) the best of a corded audio design with a USB-based 7.1 surround sound module. 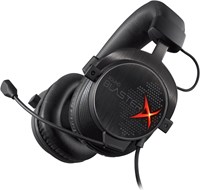 The H7 is a 50mm design, which Creative is promising bears the trait of comfort with high-quality materials. The H7 has a detachable noise cancelling mic, in-line remote, and a USB based surround sound module.

Another key area of desing for the H7 is durability. The H7 uses fewer parts than previous headset, but mixes aluminum and stell for the headset's core structure. The memory foam cushions are removable and replaceable.

For anyone wondering if the H7 can be had as just an analog headset, let me introduce the Sound BlasterX H5. 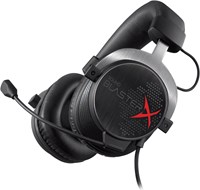 The H5 is essentially a H7 without the USB 7.1 surround module and a few cosmetic differences. (For example, the H5's ear cups do not light up.) That means the H5 carries the same comfort, materials, weight, and analog design as the more expensive H7. Both the H7 and H5 come with clear crystalline capsule packaging that is meant to double as a carrying case.

Finally, there is the Sound BlasterX P5. 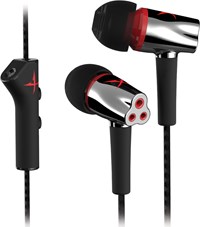 The P5 is an in-ear design, and its 7mm drivers are paired with port tube form factor that is meant to bring the bass. With the P5, Creative is not pitching a bass-heavy presentation, rather, the P5 is meant to be balanced as well as noise isolating. The P5 comes with a carrying case and features an inline mic and control cluster.

And that's the new Sound BlasterX line of products. While this line has a clear association with PC gaming, each product not only is meant to also be used with mobile devices, but also consoles like the PS4 and Xbox One. It's going to be fun later this year to see if the Sound BlasterX line lives up to its promise.