With the recent announcement of playlists coming to 'Rock Band 4,' as well as song exports and a number of other fixes, the game appears much closer to what was originally promised. Of course things like online play, keyboard support, and the Rock Band Network were never promised, so that helps this idea as well.

As it turns out, Harmonix has another set of big plans to work on. Not only is 'Rock Band VR' in development (see here), but Harmonix now is setting their sights on bringing 'Rock Band 4' to PC. What it will take is $1.5 million in crowdfunded dollars, that plus $500,000 Harmonix money will get Harmonix and another developer, Sumo Digital, to bring 'Rock Band 4' to the PC. 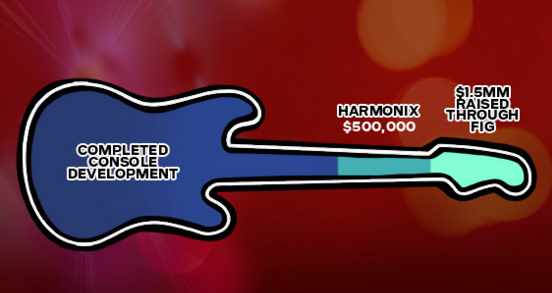 The idea is to bring the full 'RB4' experience to PC, and then future updates and features would be for all platforms. Nowhere in this scheme is the recently troubled Mad Catz mentioned, and the PC version is described as supporting most 'Rock Band' controllers, including Wii stuff. Controllers like the PS4 Bluetooth guitars will require a Bluetooth adapter while the older stuff will need the correct Bluetooth to USB dongle (like PS2, PS3, and Wii instruments).

'Rock Band 4' for the PC will have the 65 included songs, and there may be a way to get 33 bonus songs (like backing the Fig Campaign). There is no song DLC ownership crossover with console versions, but of course, users will be able to buy some 1700+ DLC tracks with the PC version.

Right now, it looks like the PC version will be software only (maybe priced at $50). Details on the campaign, including the backer rewards, can be found here. According to the Fig investment part of the campaign, a $250 investor would need for 70,000 copies to be sold to break even on their investment.