'EVE: Valkyrie' Gets PlayStation VR Launch Trailer Ahead of Next Week's Release

Get ready for some virtual reality dogfighting.

PlayStation VR launches next week, and one of the most anticipated titles is CCP Games' 'EVE: Valkyire.' The space combat game takes place in the 'EVE' universe, and has players joining a group of galactic pirates called the Valkyrie. Once in the group, players can get into dogfights, and take part in all of the space combat they want.

'EVE: Valkyrie' is split into three separate modes. The single-player component is called Chronicles, while the multiplayer mode has two teams of 8 squaring off against each other. A third mode (which wasn't originally in the PC version) is called Carrier Assault, and has three separate gameplay stages. One of which is a 'Star Wars' inspired mission that has players flying into the center of a ship.

Check out all of these modes in 'EVE: Valkyrie's PlayStation VR launch trailer: 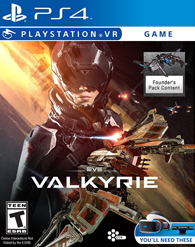