Who knew a dock could be so slick?

Today, Hewlett-Packard announced eight new tablets (including one hybrid tablet) as part of a push to provide business users with secure, rugged, and powerful mobile options. Instead of taking a consumer tablet and then trying to encase it for business use and roll the dice with securing the data, these eight devices have been designed with the same professional focus as HP's business notebooks.

While HP is pushing new models (along with the value based HP Pro Tablet 408) as the way to secure and toughen devices used for work, (especially in the Enterprise setting), the company also introduced services meant to secure BYOD solutions. These services can be deployed irrespective of phone, pc, tablet form factors or Windows, iOS, or Android architectures.

These new tablets, however, take it step further. In Enterprise environments where users and companies rely on legacy apps and need to be sure that productivity is carried out with the right amount of security, these new HP tablets are ready for action. That means not only passing the military MIL-SPEC testing, but going beyond. The HP ElitePad Rugged Tablet can handle a seven foot drop without batting an eye. Its sibling, the HP ElitePad Healthcare Tablet has a Microbio finish, which makes it appropriate for use in a healthcare environment.

This idea of commercial standards has been extended to the HP Pro Tablet 10 EE & HP Pro Slate 10 EE, which offer tough, but again, standardized Windows and Android options for the use in schools.

But HP had more than just rugged and tough on hand, and the new HP Elite x2 is a flagship product. The 11.6 inch screen (available with 1080p) is paired with an Intel Core M, making it prime for work and play use in a coach seat and tray. It also carries with it a Wacom digitizer. With the double battery built into the keyboard, the Elite x2 offers 10.5 hours of battery life. 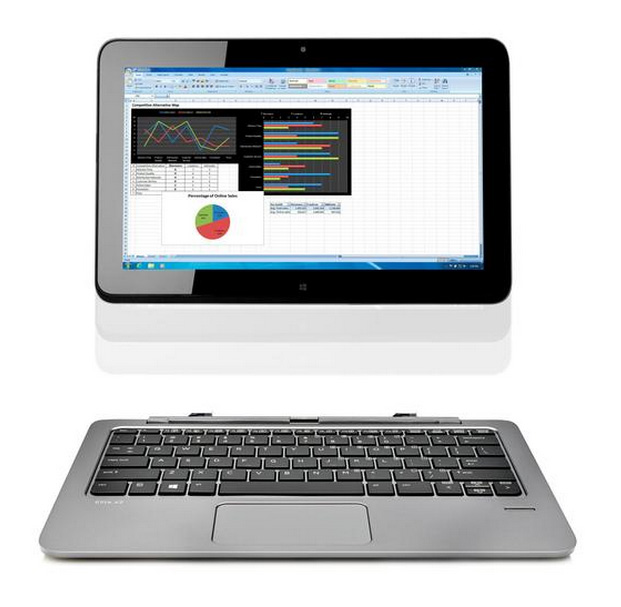 That keyboard piece is impressive, it's been built with a hinge that keeps it upright (even when using touch) without the typical added weight in the keyboard. Equally impressive, there is a travel keyboard. The travel keyboard option includes a mouse and is a thin rigid keyboard (unlike the Microsoft's Surface offering) that also adds a combination jacket and stand. 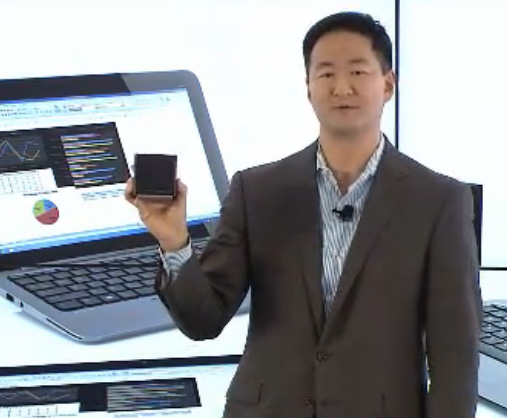 Sexiest of all for the Elite x2 may be the wireless dock. The black cube was developed with Intel and uses WiGig tech. On the professional side, the dock even has its own Mac address.

The Elite x2 is nice, but when it comes to pure tablets, the HP Pro Slate 8 & HP Pro Slate 12 may be the most the most premium Android tablets on the market today. Both models sport rapid charging technology. Beyond the nice finish and specs. There is still the serious side. The screens nits have been optimized for battery life, and both carry a 4:3 orientation which emphasizes the likelihood of use in portrait (document) mode. Both models offer the HP Duet Pen, but unlike other pen technology, this is not just the case of use a stylus on a touchscreen. The Pro Slate 8 & Pro Slate 12 use ultrasonic x-y tech with the HP Duet Pen. This is a hardware based solution, not just an extension of the touchscreen. As such the pen can be used with accuracy even with a hand resting and touching the screen at the same time. 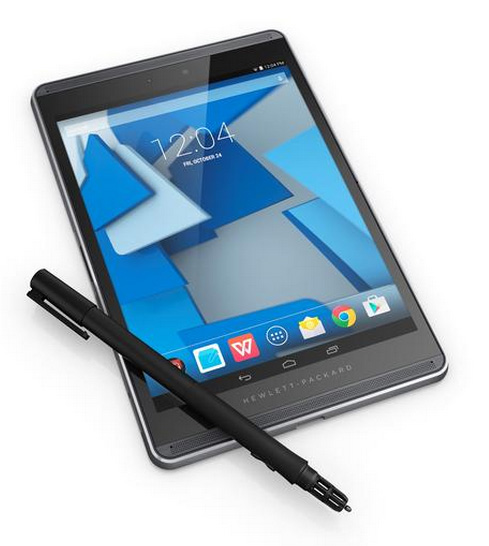 Interestingly enough, the Duet Stylus can quickly switch over to using ink. Developed with Qualcomm, what makes this feature interesting is that the user can write in ink on paper, and the Pro Slate 12's ultrasonic tech (ultrasonic mics) can pick up that movement and thereby simultaneously record those pen strokes on the device.