But does it make us happy?

'We Happy Few' is in development by Compulsion Games, whose only release to date is 2013's 'Contrast.' It is a first-person survival game set in a retrofuturistic, dystopian Britain that has committed an unspeakable atrocity against Russian invaders. They successfully repelled the attack, but in return they cannot live with the guilt of their actions, and the entire population is required to take a disturbing drug called Joy. Joy suppresses their memories and alters their perspective of reality, resulting in a society that is slowly degrading into narcotic anarchy. 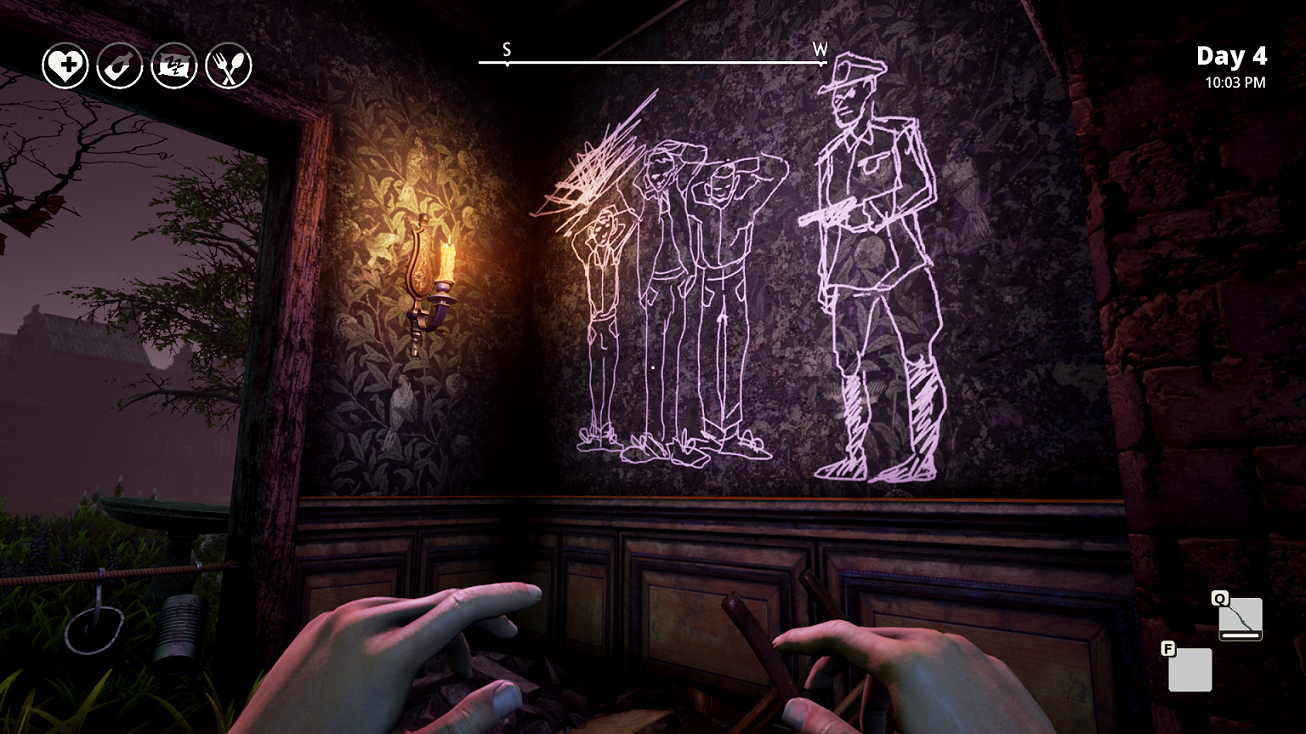 Arthur is one of these delusional "Wellies", at least at first. During his duties as a government censor, Arthur comes across an old newspaper article about his brother. He savors the bittersweet memory and decides to stop taking his prescription of Joy. This leads to an unpleasant situation for him, as other Wellies quickly condemn any "downers" they come across, becoming suspicious and violent. Arthur escapes from city hall into the sewers, where he sets up a home base. He ventures out into Wellington to look for any way out of the situation, and along the way he has to deal with Wellies in various stages of opiate-laden rage. 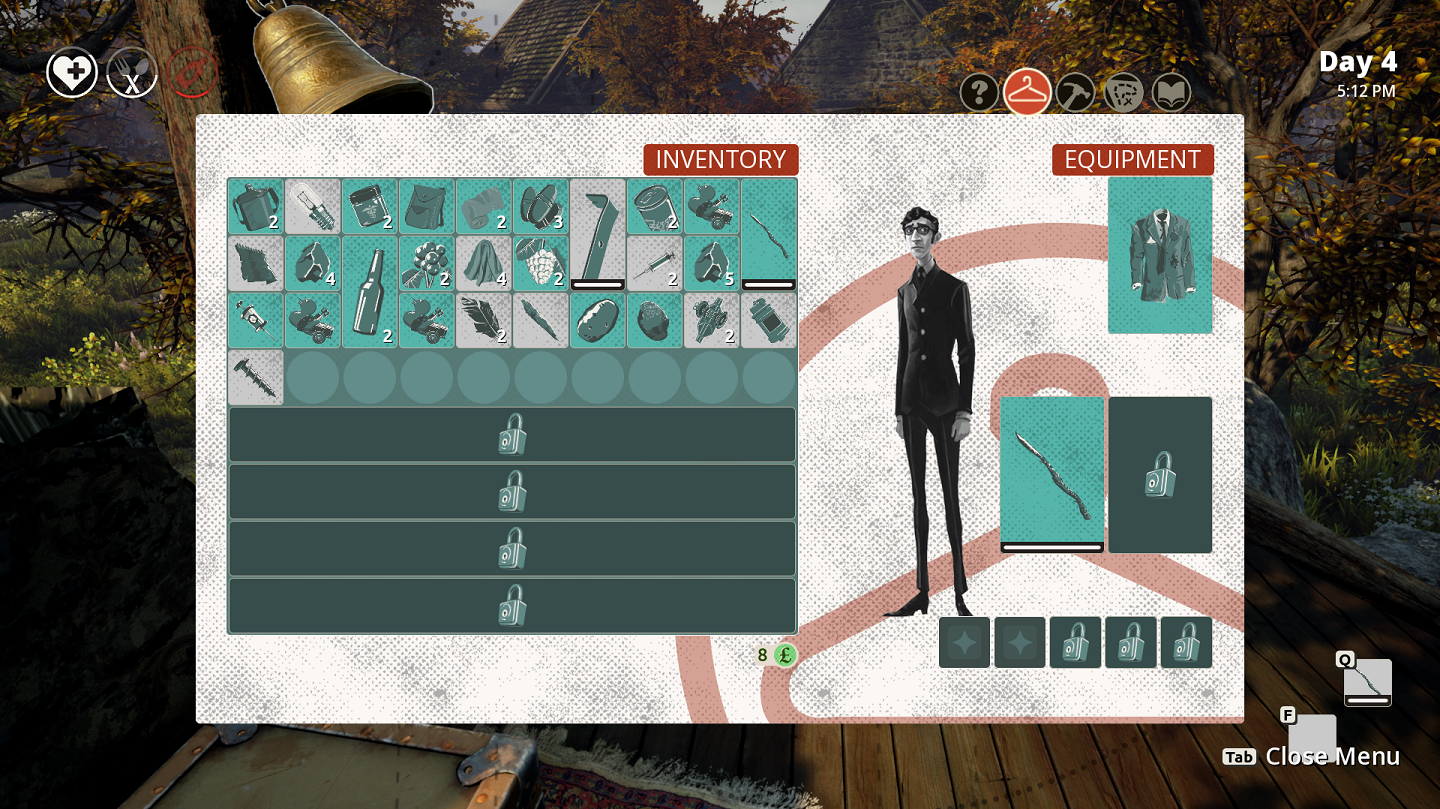 Not everyone Arthur meets is immediately hostile. If I kept to myself, avoided burglary and assault, and tried to blend in as a Joy-taking, government-loving citizen, most Wellies would leave me alone. They are a suspicious lot though, and even small errors in etiquette can lead to increasing levels of paranoia and distrust. There is a 'Resident Evil'-like inventory that must be managed carefully to avoid overburdening, and the many bits of garbage that Arthur picks up on his journey can be crafted into weapons, healing items, and disguises. Of course, the best bits of garbage are tucked away into guarded, trapped houses, so I would sneak in and avoid or knock out the itinerant Wellies to get at their prized metal scraps and string. 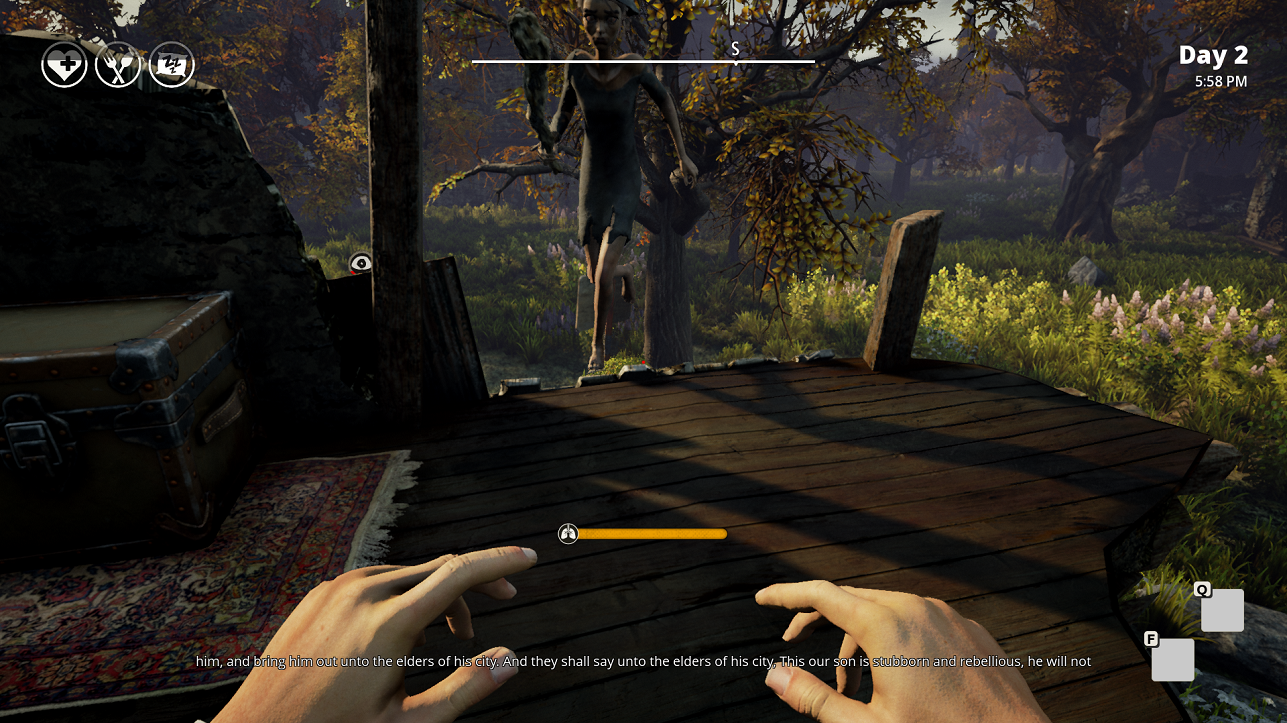 'We Happy Few' also has a somewhat uncharacteristic survival streak. Arthur must eat, drink, and sleep to stay alive, forcing detours from his exploration to find safe beds and clean water. It doesn't really need the survival mechanic to embed a sense of urgency. It basically amounts to a timer or tax on the emergent gameplay inherent in Wellington, with frequent stops necessary to do things like collect rotten food or fill up canteens of water. In many survival games this turns out to be a relatively fun (or at least not tedious) mechanic, especially when the character is capable of making their own food supply. In 'We Happy Few' it feels out of place. Furthermore, the bars drain at a rapid pace, so I'm never more than a couple of minutes away from having to find another snack or take a nap. In one hour of play, for instance, Arthur had to sleep for approximately 18 hours of in-game time, eat 8-10 pieces of food, and drink 4-5 helpings of water. 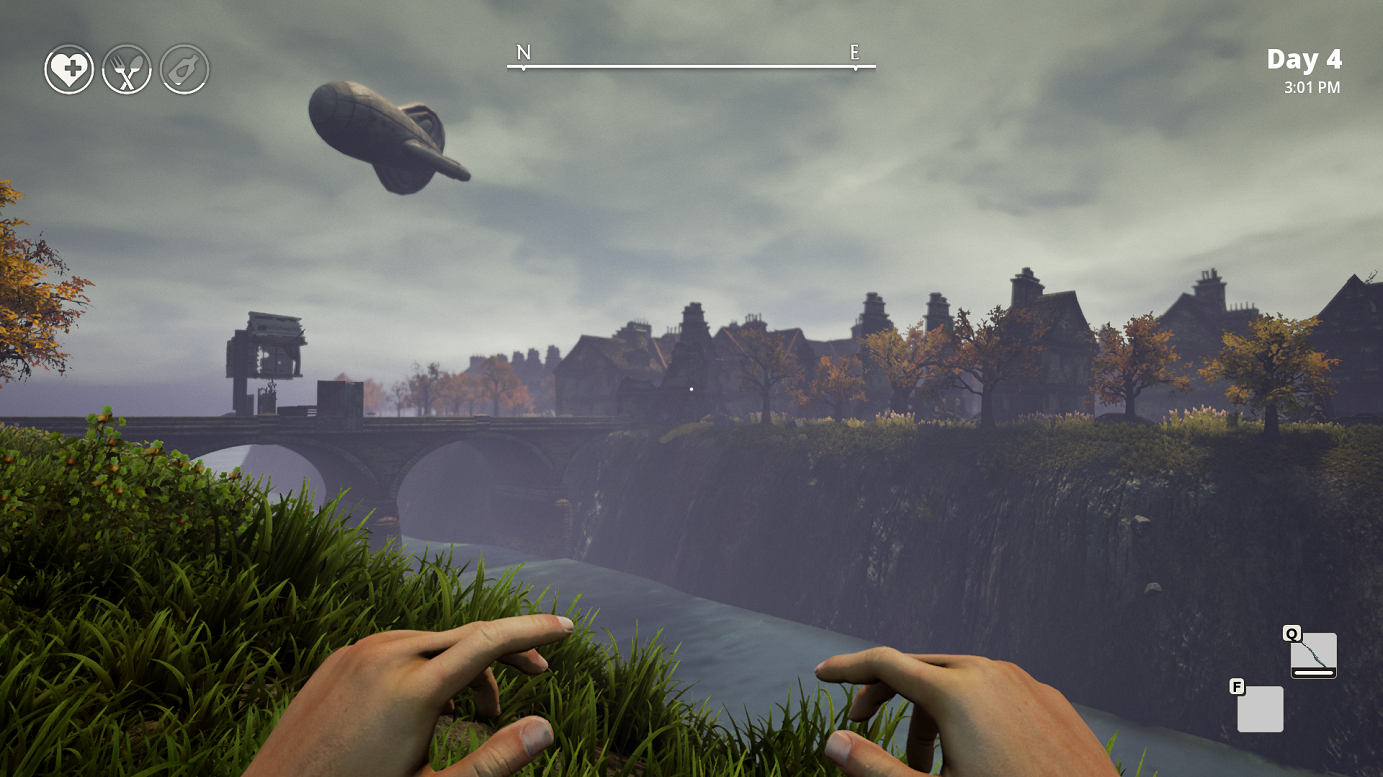 The game's setting is one of its most entertaining accomplishments. Wellington Wells is a mishmash of old-fashioned dystopian film and literature like '1984', 'Brazil', and 'V For Vendetta' (not to mention a fair dose of 'Equilibrium'), but mixes in its own brand of cutesy yet horrific imagery. Joy starkly changes the way that people look at the world, turning gore into candy and such. Without it, Arthur is subjected to the grim realities of life in Wellington and the steady decline of the society into insanity and death. There have been many comparisons between 'We Happy Few' and 'BioShock', but this is only skin deep. There is a 1960s dystopia going on, and the Wellies are somewhat similar to splicers in their horror and tragedy, but this is a much different gameplay experience. Guns and supernatural powers have been replaced with pointy sticks and rocks, roguelike elements of permadeath and procedural generation are on full display, and a wary version of stealth/camouflage is possible. 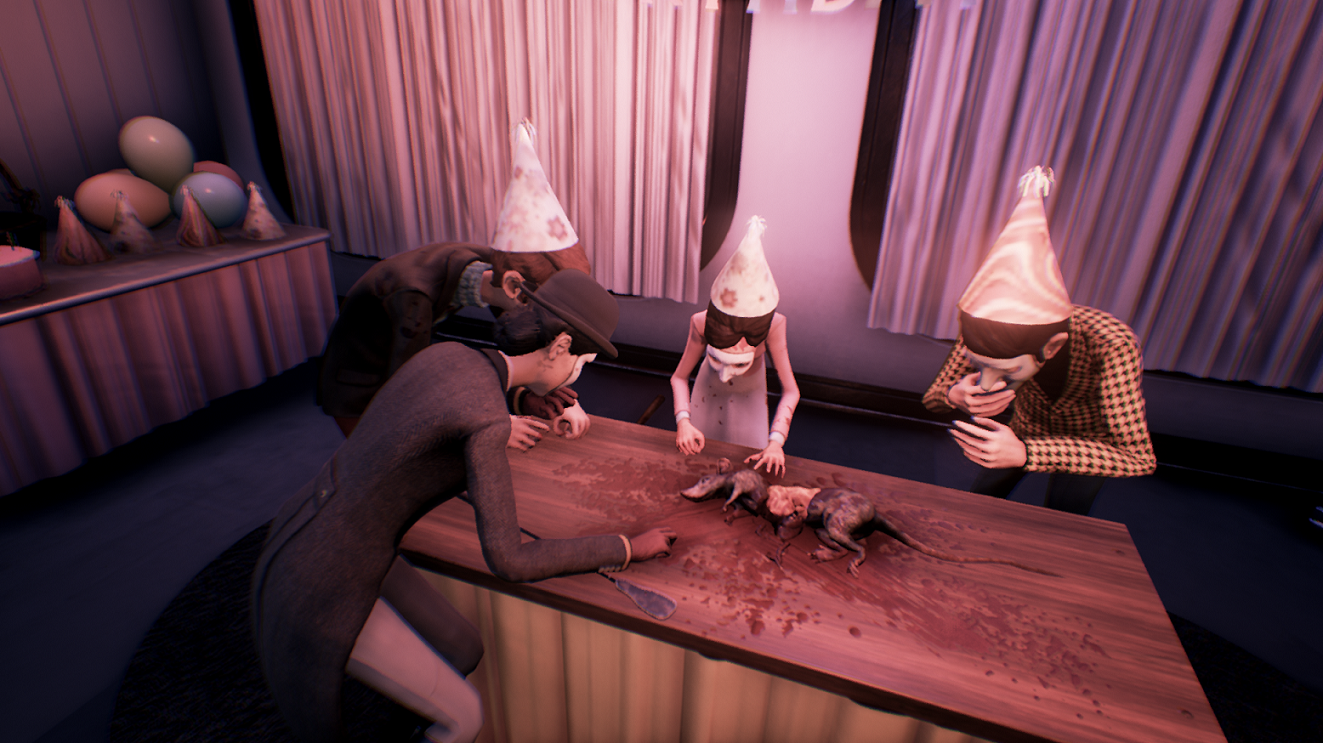 The alpha is of course missing a lot of content planned for the final release, most notably the inclusion of two other playable characters, each with their own motives and storylines. One issue I've noticed in the sandbox is that content is relatively light. There isn't a lot to do outside of pursuing the main questlines. Most houses are closed off and most NPCs have little in the way of quests or interactivity, so exploration is limited to a few small apartments and makeshift dwellings. The nagging survival mechanic cuts into this as well - there's only so much exploring I can do when I will eventually run out of things to eat. This is juxtaposed by a very respectable level of polish in the world. Voice acting is incredible, as is the writing and the ambient culture of fear and paranoia. Uncle Jack is the clown-faced TV show host/government announcer, and his smiling mug and inviting-yet-judgmental voice lends an air of dark, campy ambiance, not unlike the creepy TV shows in 'Alan Wake' and the Art Bell radio broadcasts in 'Prey'. 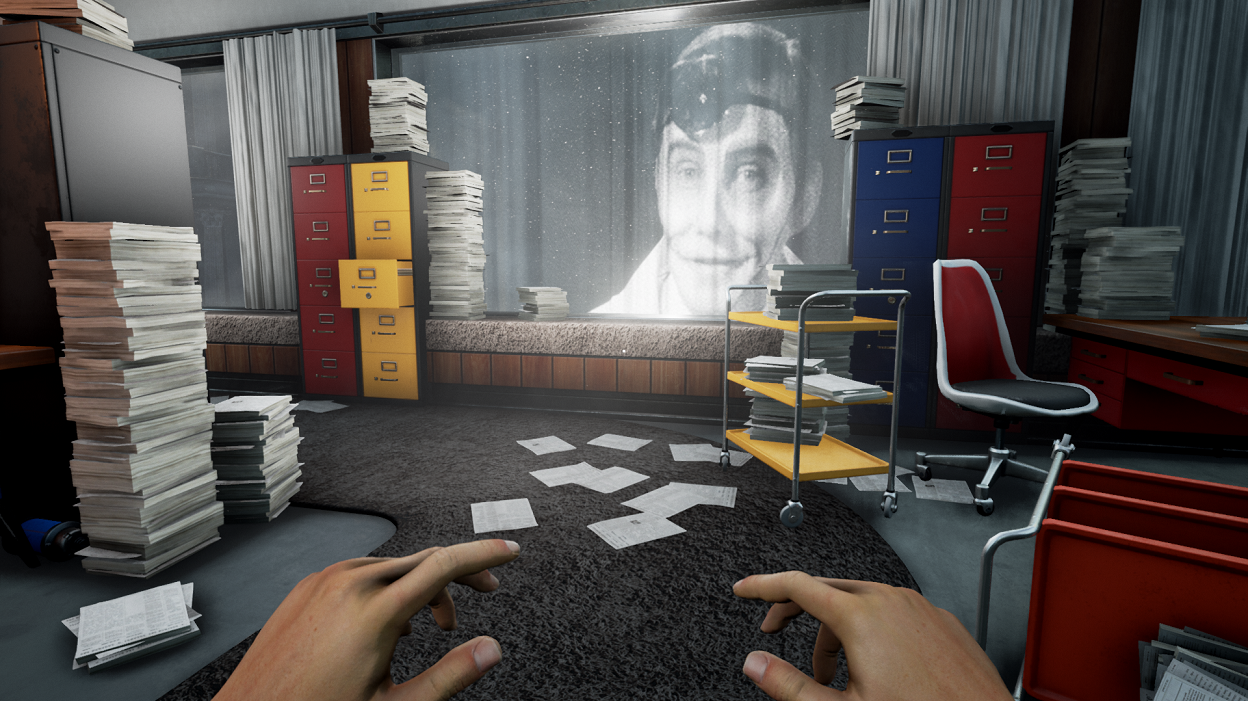 Compulsion has the setting down pat - they make it look easy to develop a living, eerie world of lies and simmering terror, something that so many games have difficulty expressing. On the other hand, 'We Happy Few' needs some work yet in what it can offer to players. If they can flesh out the content and perhaps offer some more variety in the settings, this could be something really special.