Over the past several years, 'Call of Duty' has been nothing but well produced. Unfortunately, the storylines of the last few games have come out of right field… and they've pretty much stayed there. Not so for 'Call of Duty: Infinite Warfare.' Yes, this is a futuristic sci-fi setting, but it's a modern classic archetype. There's earth, full of rival nations, and there is the resource rich space colonies. These settlements, whether they are corporate or else independent, have a problem, the unchecked aggression of the Settlement Defense Front.

The SDF is a rogue group turned nation, and they are looking to control all of those juicy resources that are on offer in space. The SDF has made a living off of the squabbling politics of earth, eating off the edges and seemingly taking bites of territory and resources that don't, in isolation, seem worth a war. But as the game begins, the SDF has decided to initiate a pre-emptive strike against a peaceful fleet parade happening in Geneva.

It's here where Squad Combat Air Recon team leader, Reyes, enters the fray. Reyes is not your typical Call of Duty player character. He leads a highly specialized team of fighting space pilots, which through the marvel of 'Infinite Warfare,' have cause to follow-up attacks via combat ship (in space like an X-Wing fighter) with both zero G and SEAL type incursions. As SCAR team one commander, Reyes is part of the effort to repel the SDF attack. The SDF attack was devastating. Reyes and his mentor, Admiral Raines, rally SATO forces against the SDF, but the SATO fleet is nonetheless smashed with only a few pieces left in fighting shape. 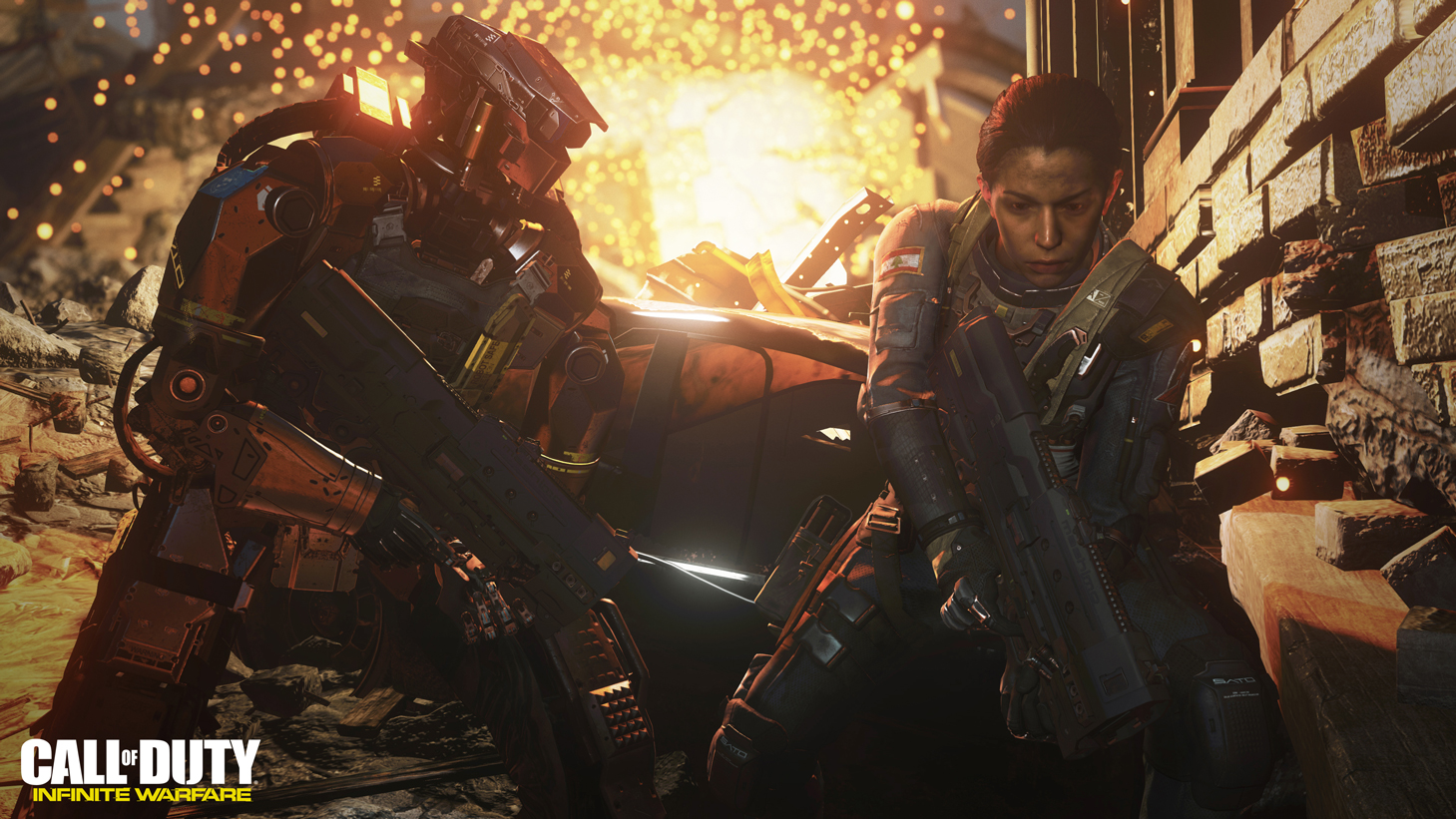 One of the few escapees of the surprise attack, the USNA Retribution, is still a viable carrier type spaceship. By way of a battlefield promotion, Reyes becomes the Captain of the Retribution, and the result is that the player gets to be a character that flies fighters, personally leads attacks and special strikes, but also commands the best force that earth has left.

So yeah we're talking a sci-fi vibe that can be found in dozens of books, anime, and even movies, but has seldom been seen in games. While 'Wing Commander' may be a PC classic, it's 'Infinite Warfare' that has the tech to make going from the bridge to the hanger to the dogfight and fleet assault, to the heart of an enemy flagship and back again.

When Reyes and his SCAR team touchdown, his 'Call of Duty' pedigree is clear. Guns, grenades, melee attacks, support strike, and even abilities (like the arm shield) are at the player's disposal. These abilities are also there in zero G, but the fighting is much more vertical, and the grapple is much more useful. Reyes even has a grenade type that can disrupt enemy gravity. 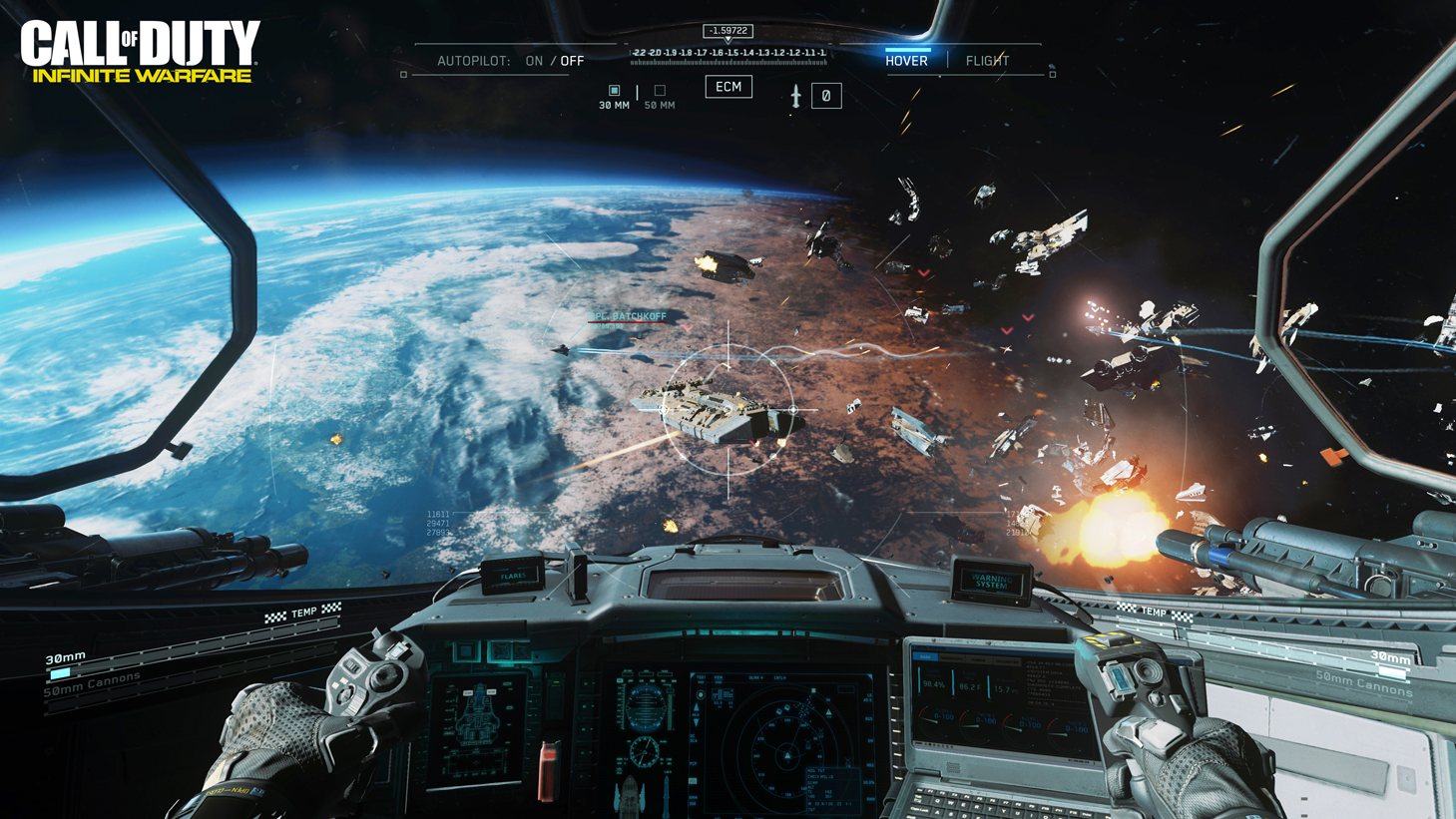 Flying the Jackal is something quite different from the standard CoD vehicle. This is not on rails, and the player has the freedom to really pilot this thing around a battle. Still, it should be familiar to most CoD players. The Jackal is meant to control much like a CoD character (like with strafing). The Jackal even has a cooldown health system.

Reyes also has a robot buddy, Eth.3n. Unlike the enemy robots that the SCAR team smashes through, Eth.3n has personality, and as the battles go by, he's becoming a familiar part of the team.

The only thing that fans really need to know about Eth.3n is that when Reyes takes to his Jackal assault space fighter, Eth.3n rides in the navigator position. (No word on the Dagobah system). 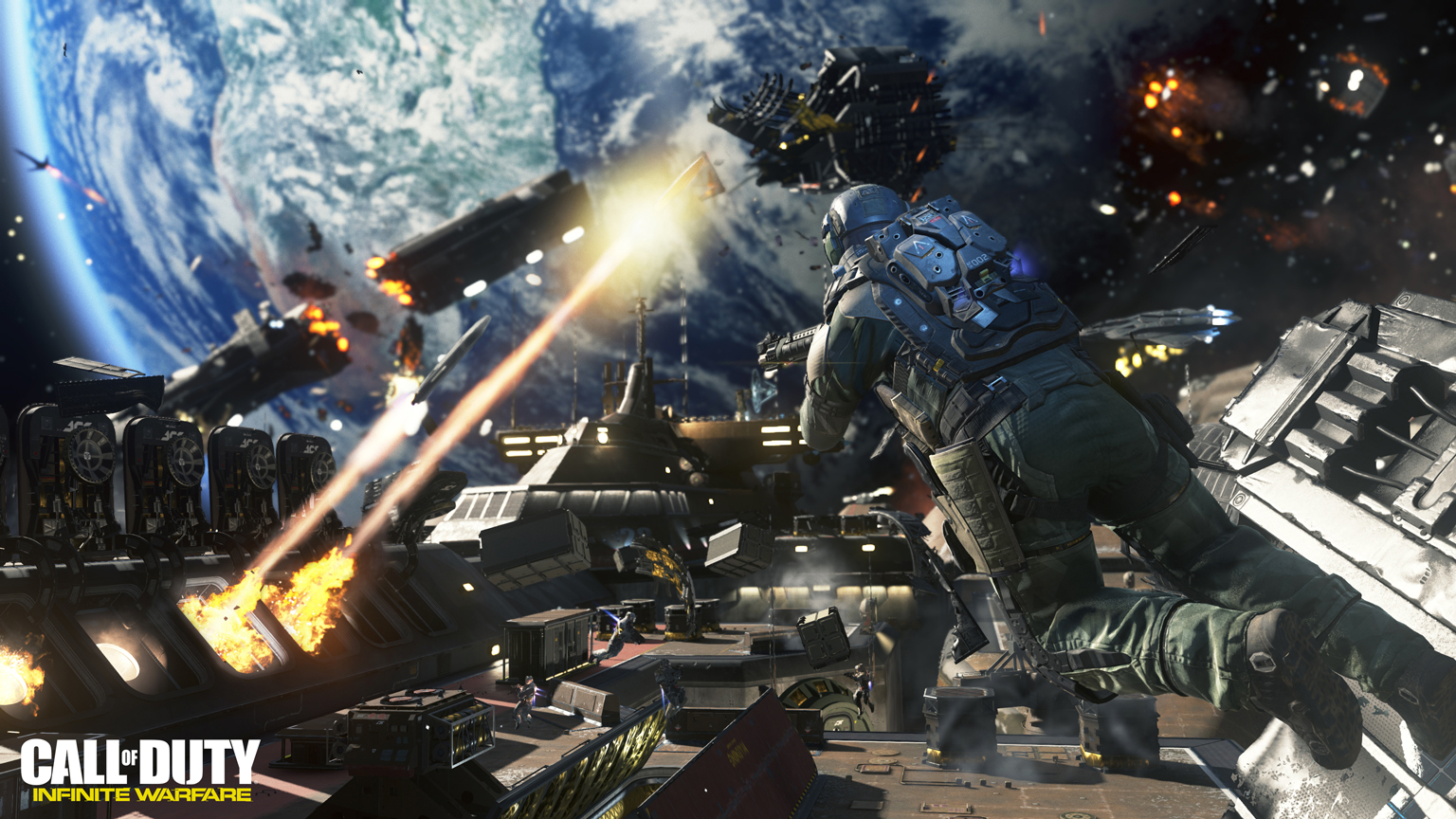 Although Reyes tends to dangerously lead his SCAR team when he should probably be in the command chair of The Retirbution, he still has to make several important command decisions. It's Reyes that opens the galactic map, picks through the directives from Admiral Raines, and decides where to go next. In this way, Reyes can tackle side objectives, even to the point of stealing tech and abilities from the SDF. But at the same time, Reyes has to decide when to risk people. He can't fully insulate his people, however, as the big picture of the main overall mission demands that sacrifices be made.

If that's not enough intrigue, Reyes also has to deal with Staff Sgt. Omar. Omar is in charge of the Marines attached to The Retribution. Omar is under Reyes command, but he's not beyond questioning Reyes' specific experience.

The Retribution will be the player hub, but Reyes's Jackal fighter is special as well. Via some light RPG mechanics, this Jackal will shaped by the player's actions.

The ship assault shown at the Sony conference is one such optional mission that is picked via the player hub (the bridge galactic map).

When adding in all the specific characters I've already met in the story, 'Infinite Warfare' seems to want to have memorable characters, like say from the SSV Normandy. At the very least, the combination of a strong narrative, seamless multifaceted gameplay, top shelf production, and some light RPG characteristics would place 'Call of Duty: Infinite Warfare' close to can't-miss for 2016.

And that's before factoring in the newly Remastered 'Modern Warfare.' After seeing most of 'Crew Expendable' in action, I think this is a remaster to look forward to.