There's no limit to the potential of HyperSound Glass.

Take it from someone who has carefully followed the trends of an industry, E3 2016 reflected major changes for the audio giant Turtle Beach. After skipping out on CES 2016, the company came to E3 with some heavies. Front and center, there is the Elite Pro Headset and Tactical Audio Controller. Amazingly, Turtle Beach got these products ready to launch for E3 week, and in the big time stopping grounds of the Central Hall, which is mainly occupied by Microsoft, Sony, and Nintendo, Turtle Beach was in the front letting players take on the new Tournament class audio combination. 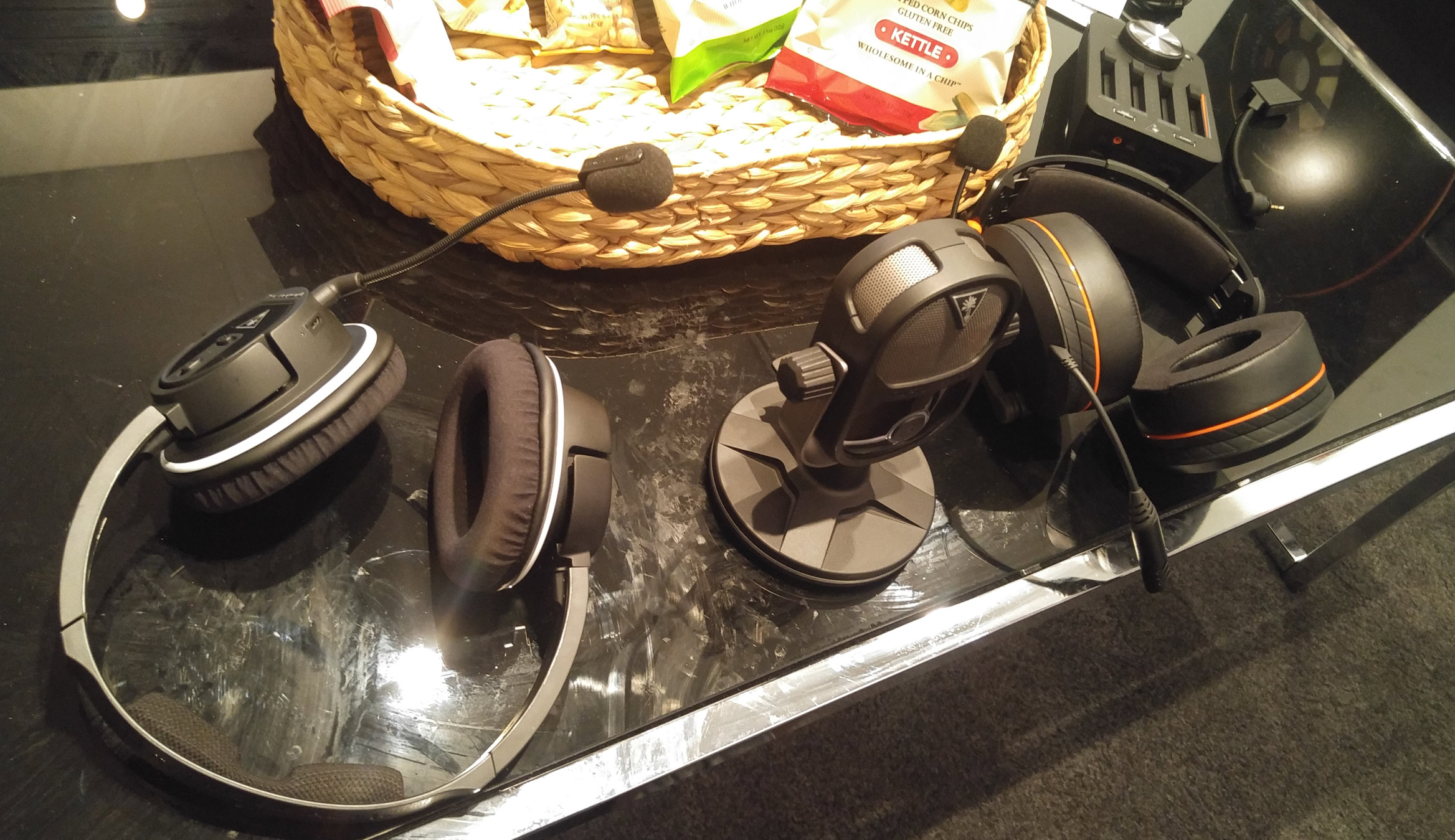 In fact, in several official Entertainment Software Association (ESA) E3 photos, like the one below, the Turtle Beach booth is quite prominent. (This is the opening flood of people on Tuesday.) 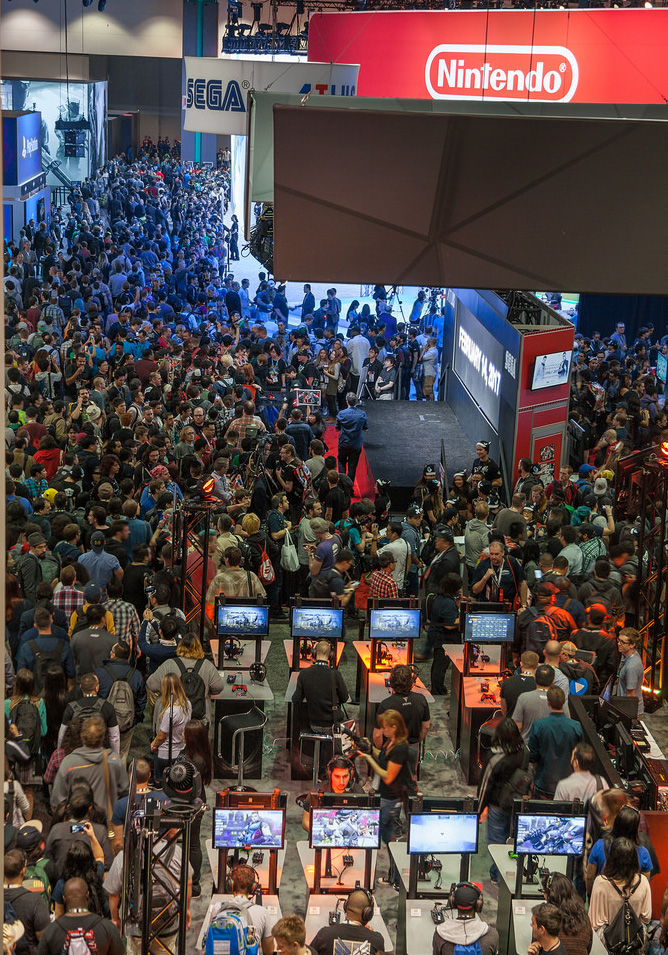 E3 marked my first chance to get hands on with the new headset design, the Elite Pro. This headset has consumed a great deal of development at Turtle Beach over the past three years, and it shows. 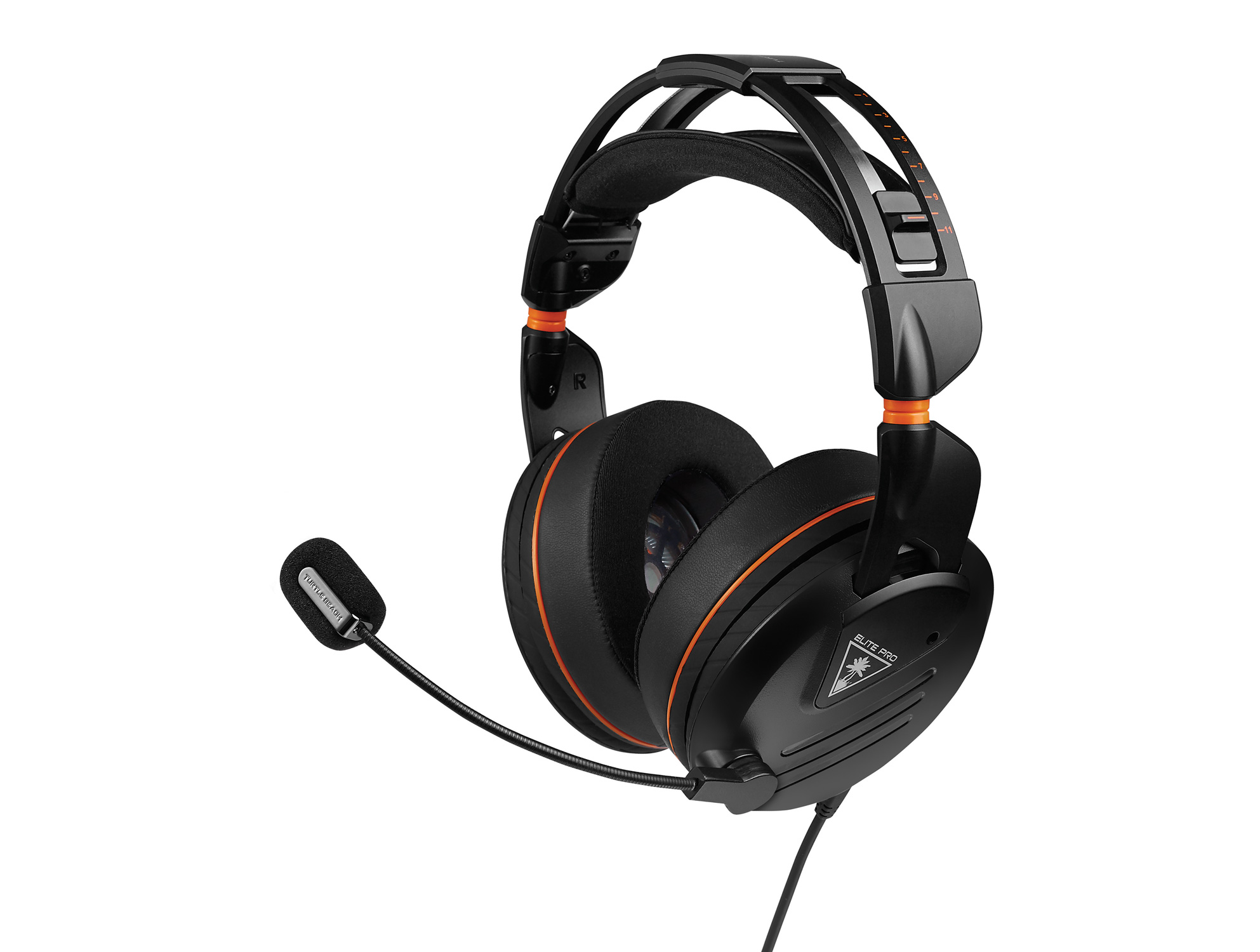 It's packed with promised features like the tension relief system and the eye-glass channels, but more importantly, it's not made from shiny plastic. It's a flat metal with articulating ear cups. It also lacks any of the typical green/blue looks, and that's in part because it's meant for use with the user's platform of choice, particularly if that platform is either a PS4, Xbox One, PS3, 360, PC or Mac. The 50mm drivers have been tuned with chat in mind (think mids), and this is one area where the eSports focus should really bear out. The ear cups aren't just a mix of materials meant to form a sound isolating pocket without heating up the user's ears, the ear cups actually have a cool to the touch spandex surface for the user's ears.

My first go with the Elite Pro T.A.C. proved to be similarly illuminating. 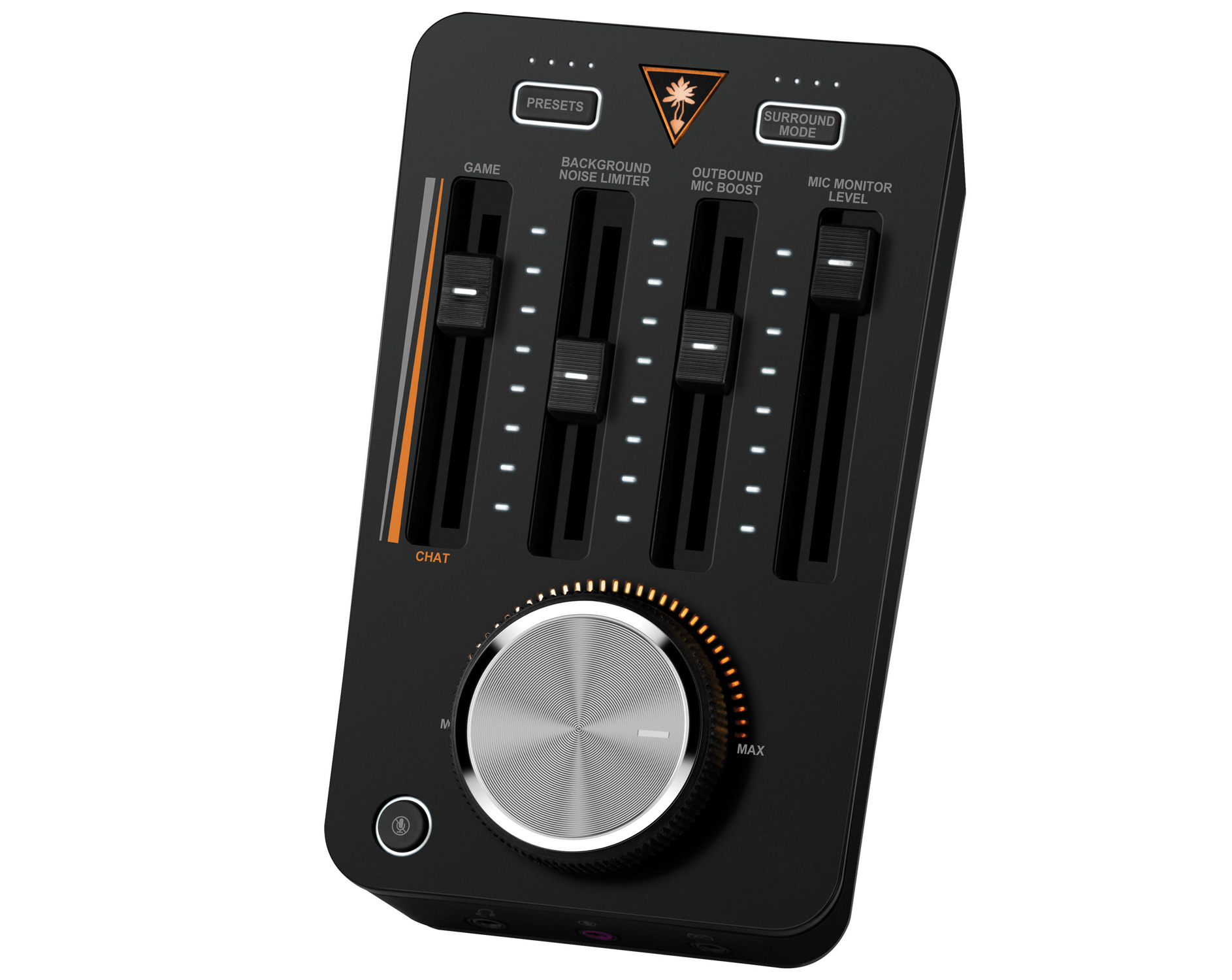 Not only does a single T.A.C. support either a PS4, Xbox One, or PC (compatibility is controlled by a switch on the back) but it offers granular control over background noise, outbound mic level (what others hear of the user's voice), and internal mic level (what the user hears). In an environment as crazy as E3, such control is crucial. This is why there is also an extra $30 noise-cancelling mic available. The Noise-Cancelling Mic includes a second mic that identifies background noise. (This should be familiar to any users of an ANC headset). And to a degree, these needs should translate in the home. An Elite Pro T.A.C. user should never have worry about their voice coming over as garbled noise, fan noise, roommate noise, etc.

The T.A.C. also offers DTS Headphone:X 7.1 surround sound in modes that can be cycled through by hitting the Surround Mode button. There is a dedicated stream out (stereo) jack for streaming, as well as Ethernet jacks for chaining as was done at E3.

And speaking of streaming, the Turtle Beach Stream Mic looks to be some serious kit. Like the Elite Pro, the Stream Mic supports multiple platforms, including the PS4, Xbox One, and PC (uses USB for all three). It's configurable via the PC-based Ear Force audio hub, and it fully supports a variety of mounting options beyond the included base. It has a built-in headphone amp, and in theory, it should be the key to livestreaming directly from a PS4 or Xbox One. The Stream Mic is due out this fall at a price of $99.95. For me, I think it could also really help with producing gaming podcasts. 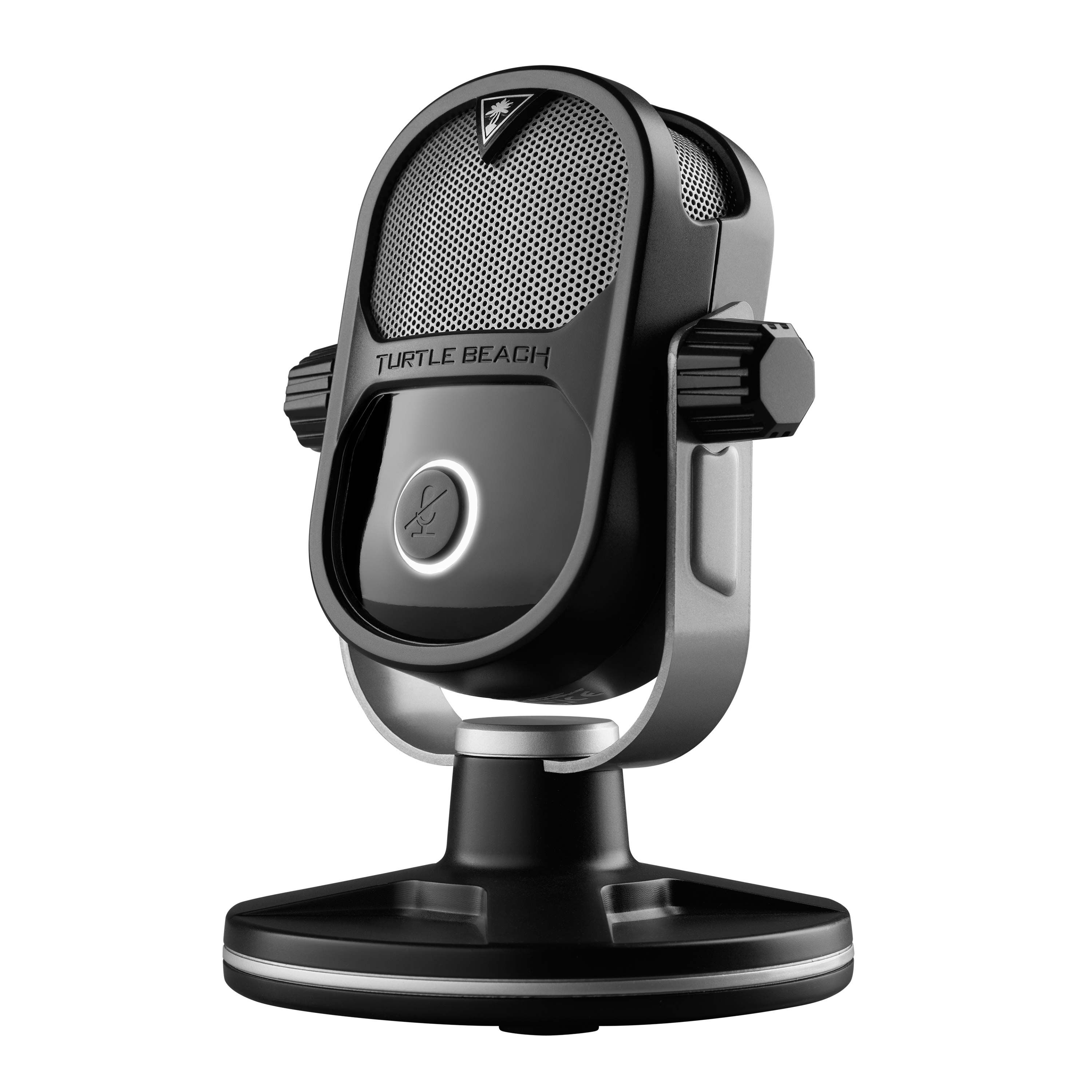 With VR having such a massive presence at E3, it was nice to see something sensible on hand for use with VR headsets. That would be the Stealth 350VR. The rechargeable 50mm driver headset has a detachable noise-cancelling mic and features a small headband meant to get along with the various VR headsets. It has been built with PlayStation VR, Oculus Rift, and the HTC Vive in mind and is meant to get the most audio performance out of a smaller footprint and accommodating form factor. It's coming this fall at $79.95. I expect it to be a big draw with both VR communities and those looking for the least fluff in a headset. 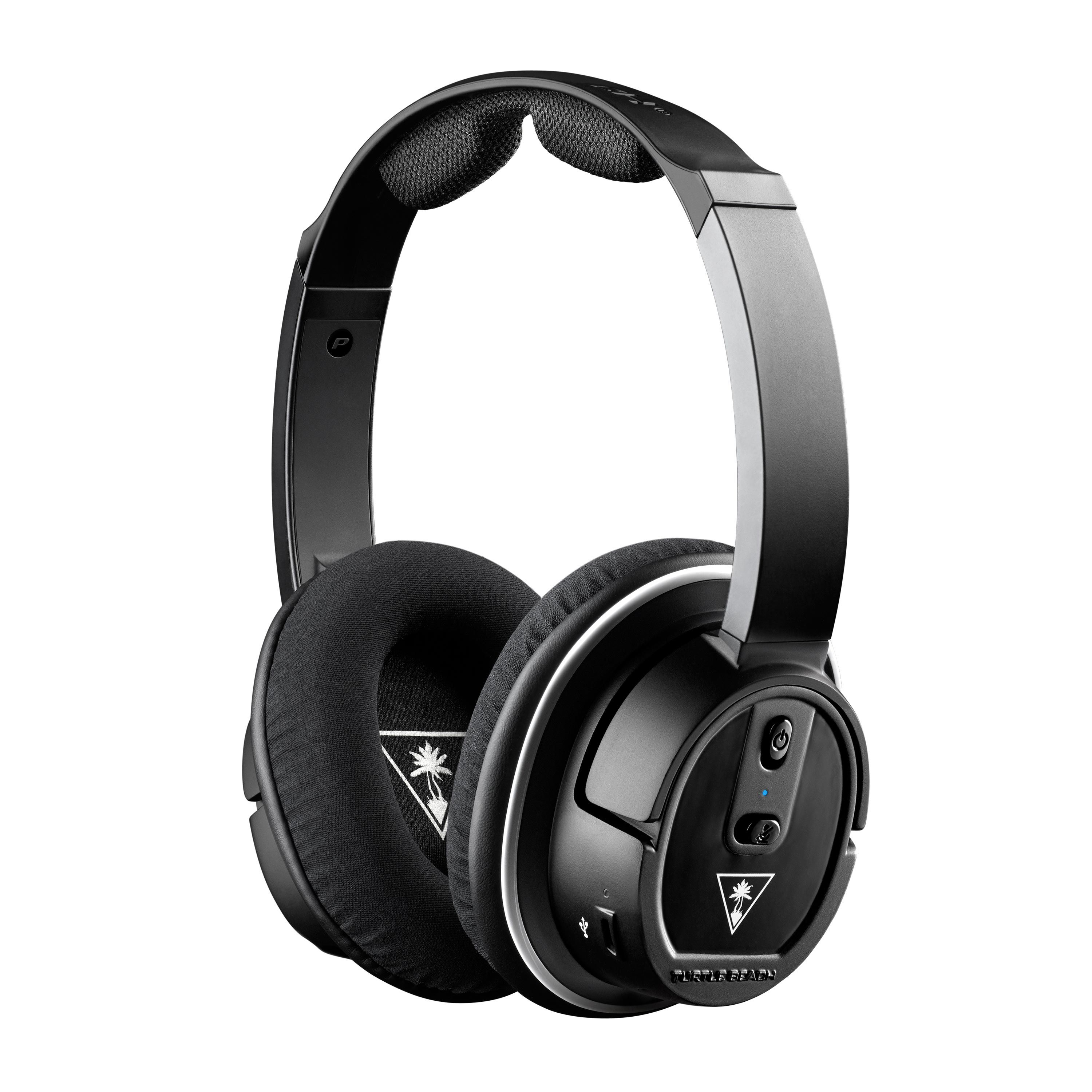 While those are all the new products that Turtle Beach had E3 ready to sell and coming soon, the company also had an absolute home theater showstopper. That would be one very specific HyperSound Glass prototype. I've written at length about HyperSound before (see here), and it's a directed sound tech that is already working wonders in various areas. But even after Turtle Beach announced that they were bringing HyperSound Glass to E3, what I found really opened my eyes. 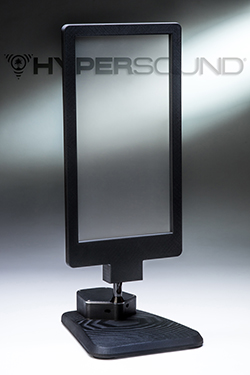 You see, the company has some Glass prototypes that basically follow a familiar form factor. That would be glass panes in plastic frames that emit sound much like the existing non-glass HyperSound product. But when visiting at E3, we bypassed this prototype for something much sexier, a display with a built-in HyperSound Glass layer.

This surface layer, while far from being production ready, was split down center in terms of the audio mapping. That is, the left side of the glass was mapped to the left channel and the right side was mapped to right. With a recent Dolby demo disc on-hand, I was able to take in something unexpected, a display where the sound emitted directly from the screen.

The directed sound aspect, which allowed me to walk away and out of the sound beam was still impressive, but the sound from the display without any speakers was even more impressive. We could be looking at a future where HyperSound is not only found in a variety of glass surfaces, but is part of each display, including that all-important living room display.

And if that's not exciting enough, it was explained to me that the output power capability of HyperSound Glass is directly proportionate to the surface size. Considering how powerful a 32" prototype is, the thought of something like a 65" is very exciting. And that's before considering how a screen could be made to accommodate more channels, or even a different kind of presentation altogether. Can't wait to see where this goes.