Can the Kickstarter darling catch lightning in a bottle twice?

Belgian studio Larian has been working on the 'Divinity' franchise for the better part of fifteen years. Once relegated to the niche world of fantasy strategy, their million dollar Kickstarter campaign for 'Divinity: Original Sin' brought them into the spotlight, heightened by the game's high reviews and subsequent console re-release. The upcoming 'Divinity: Original Sin II,' which, like its predecessor, offers co-op, did one better at $2 million and is headed for a full release this December with all stretch goals intact. This last week it entered Steam's Early Access as an alpha build, so I recruited a hapless friend for co-op and we descended into the mythology of Rivellon. 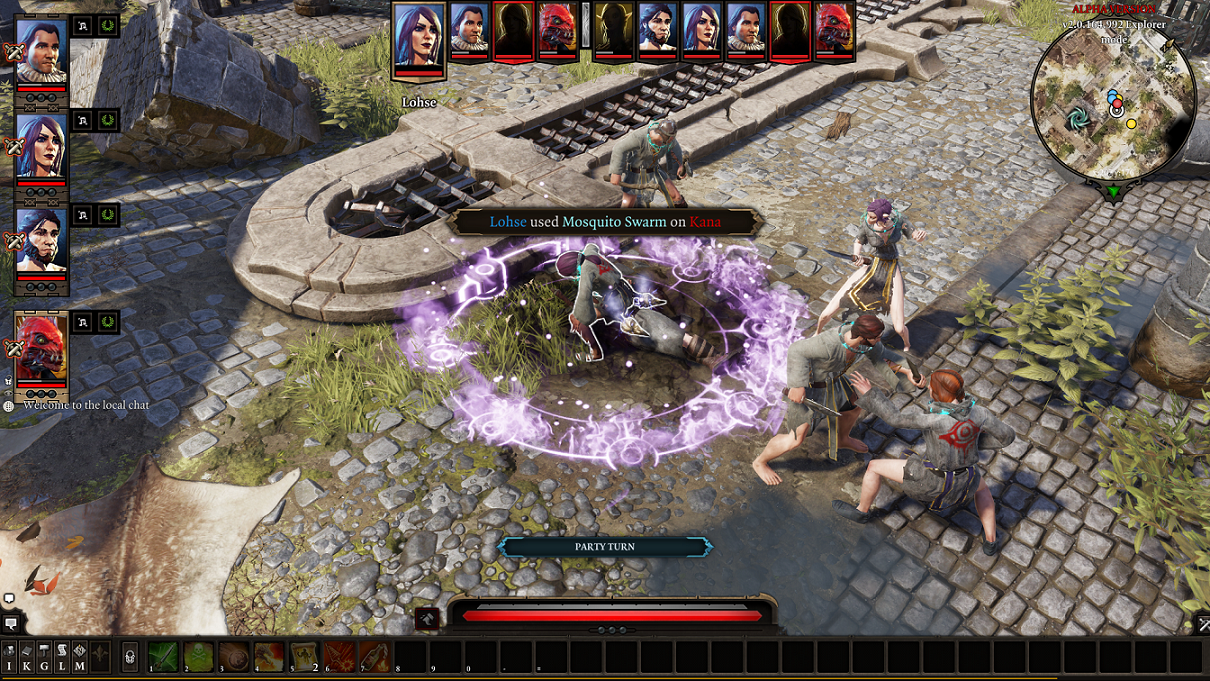 'Divinity' is a classic RPG, turn-based and all. It resembles 'Pillars of Eternity' and I suspect that it also shares that game's inspirations, namely the Infinity Engine games of the 90s and of course 'Dungeons & Dragons'. Each player can move and carry out abilities in a turn until their action points are spent, and then the next character in initiative goes. There are spells and special attacks galore, and also a large amount of grenades, arrows, and other items to give a party the edge in battle. Movement is very important and attempting to flee from an opponent could result in attacks of opportunity. Elevation gives bonuses to archers, and other environmental variables like pools of water and oil provide opportunities for elemental traps.

The alpha only includes the game's first act, a large exterior beach map where the party washes up on shore after a shipwreck. We both had glowing collars around our neck and soon learned that the island was in fact a prison colony which houses magic-users known as "sourcerers". The Source is a font of ancient power that has been corrupted, and the wizards who are able to use it are considered extremely dangerous. The island's only settlement, a ghetto ironically called Fort Joy, is lightly guarded by magic police. Even with the police present we are free to do as we please, including robbing from and murdering the populace to our heart's desire, as long as we can defend ourselves. 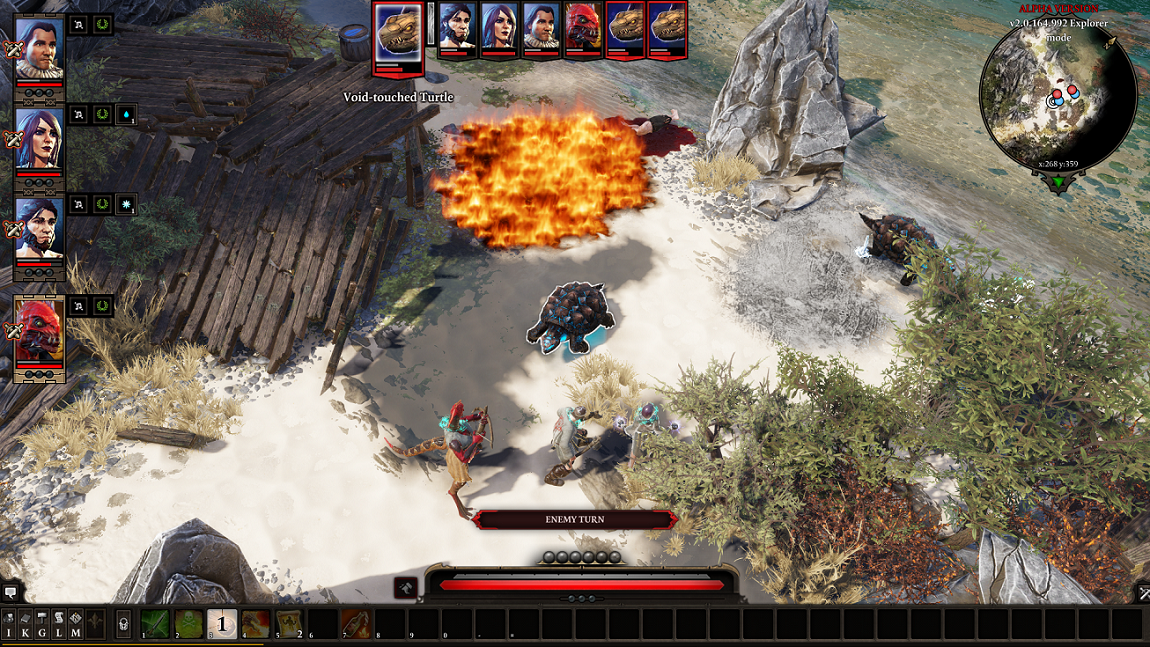 My co-prisoner and I wandered the island for several hours, looking for fights and treasure on the outskirts of the fort. We recruited a few henchmen, ransacked every barrel and basket we could find, talked to unstable crabs, and were basically your garden variety RPG new character rapscallions. We were mostly lawful until we had reached our wit's end with the quest system and, desperate to escape from Fort Joy, we initiated a jailbreak at the southern gate. Our necromancer and crossbowman fired magic missiles from the back row while the spellblade and scoundrel covered us in the front. To our surprise, we took down the guards with no casualties and waltzed out the door, free at last thank god almighty. 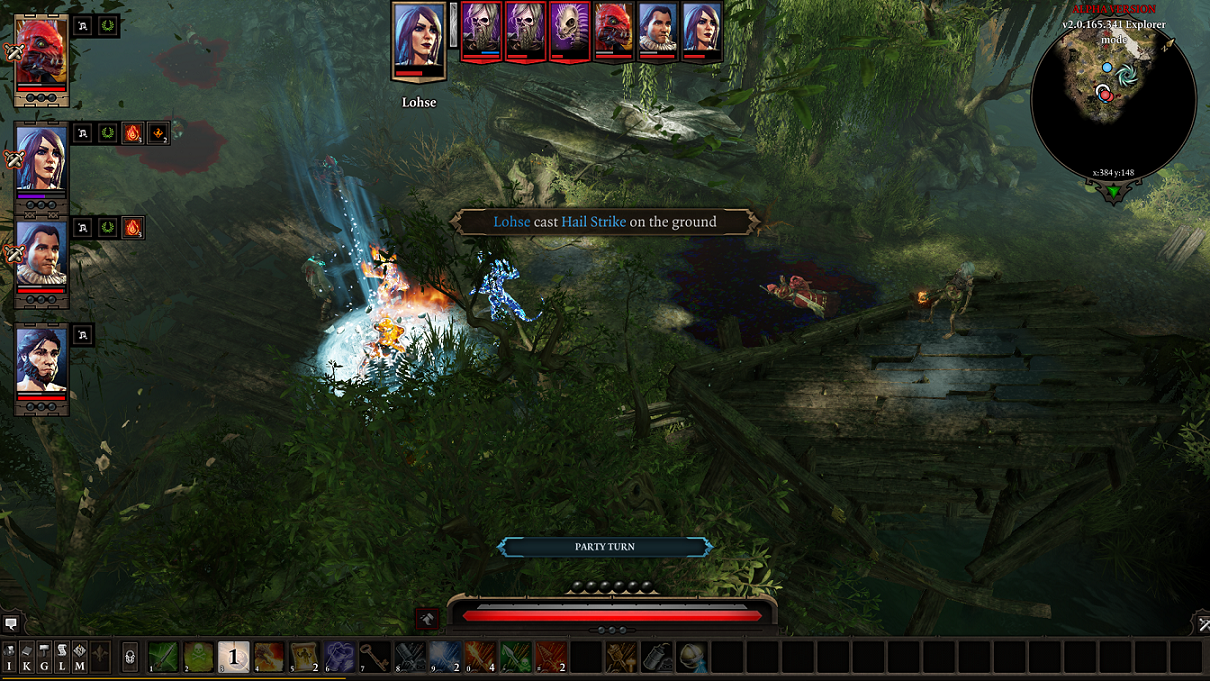 We were happy to be done with the somewhat dry fort, but after that there's not a whole lot of content in Act I. I was looking forward to delving some dark dungeon, full of monsters and traps and swag, but we will have to keep waiting for that opportunity. Even the fort is riddled with secrets, however. These secrets come in many forms: quests from unexpected sources, talking animals (we had the saddest exchange with a dog whose master had just been slain, and we tried to explain the concept of death), and hidden alcoves. Conversations are still a two-way exchange and the co-op partner can't get involved, although they can listen in, even when they normally wouldn't understand the language. 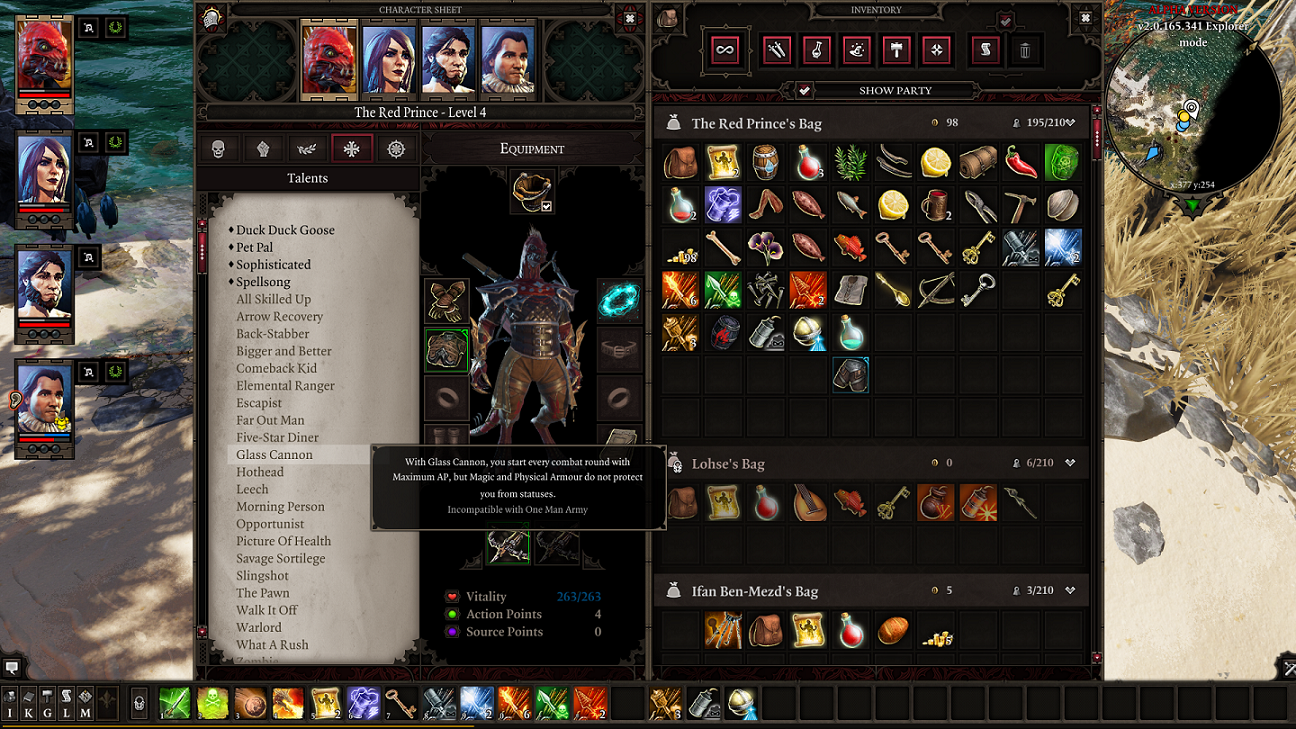 Character development is nearly as carefree as Larian advertised in their Kickstarter campaign, although it's clear that not all of the skills are ready yet. My crossbow-toting lizardman was able to buy skills in just about whatever discipline I wished. I complemented my party's abilities by purchasing points in wits, crafting, and trap disarming. The necromancer bought healing skills, and the fighter could supplement his blades with lightning magic. We didn't get enough levels to really test out everything, but the underlying system shows a lot of promise. We also didn't experience the skill crafting system, where spells can be mixed and matched to create rainstorms imbued with blood and lightning and other curiosities. That in particular sounds awesome, and a big draw for a genre where roles and classes are often static and conservative. 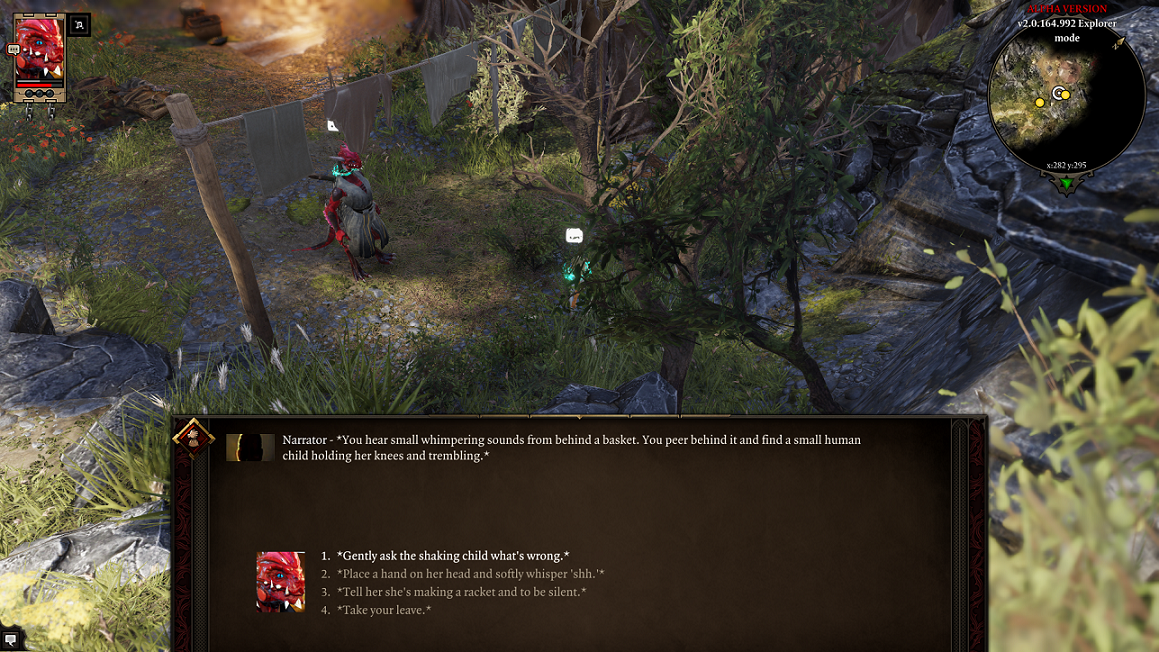 The co-op gameplay is implemented in a freeform fashion. Every human player is able to wander around independently of the party, get into scraps by themselves, and accumulate personal loot untouchable by everyone else. Most players will probably want to tighten up their matchmaking requirements to prevent unruly trolls from entering their games and fouling everything up, like killing quest NPCs and destroying valuable treasures. The host controls all of the saves and also retains possession of guest characters. With my friend hosting I could join any time and bring the lizard guy along, but if I wanted to play on my own, I had to create my own character. This does not deviate from the first game, but it does make 'Original Sin II' more of an invested process and not so much a drop-in, drop-out kind of co-op, which is probably as intended. An arena section for pure pvp combat is available in the menu, but as of the time of this writing, I was not able to actually connect to a match. The visuals and performance are otherwise good - we had few connection problems and the visuals are very nice. The audio is more subdued and there is no voice acting at this time. 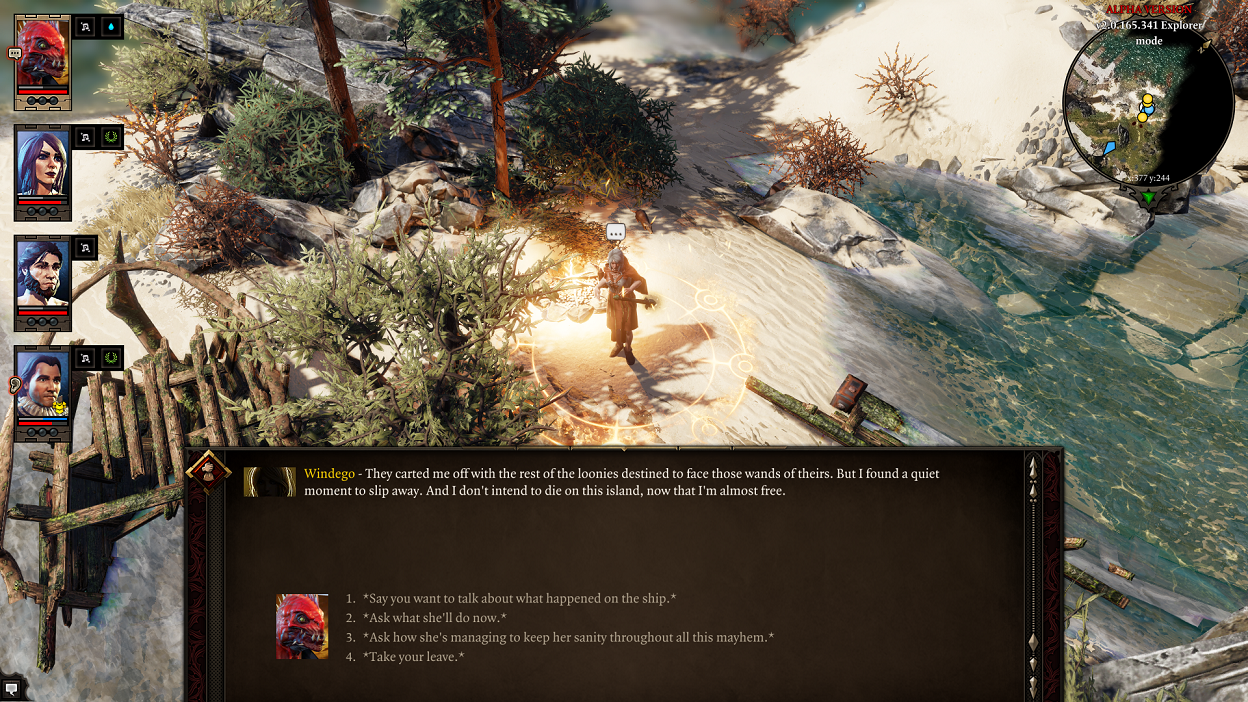 This early access demonstrates that while there is a lot of 'Divinity' still behind the curtain, Larian is doing their best to incorporate player feedback and make an open-world RPG that is still turn-based and tactical. The story is still a mystery, but the combat is top notch, and we'll be keeping an eye on 'Original Sin II' as it nears its December release window.