Today, Deep Silver announced that the free trial versions of 'Metro Redux' are coming to both the Xbox One and PS4. These versions features the opening chapters (a full third of the beginning of 'Metro 2033 Redux' and 'Metro: Last Light Redux' available in separate trials). Those who wish to finish the game will have the opportunity to purchase and continue from the trial versions.

According to Deep Silver, "The demos are available to download now from Xbox Games Store* worldwide and PlayStation Network in Europe, and will hit the US PlayStation store soon." The Xbox One versions are hugely discounted as part of this week's Deals with Gold (see here). 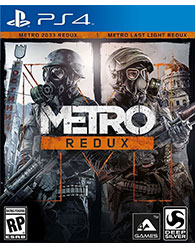