Years in the making.

Available today, The Day One edition of 'Final Fantasy Type-0 HD' (review here) includes a code for the 'Final Fantasy XV' -Episode Duscae- demo. The bundled demo has been a big deal ever since its announcement, and while I think that 'Type-O' stands up well on its own, it's still nice to get this in-depth early look at 'Final Fantasy XV.' 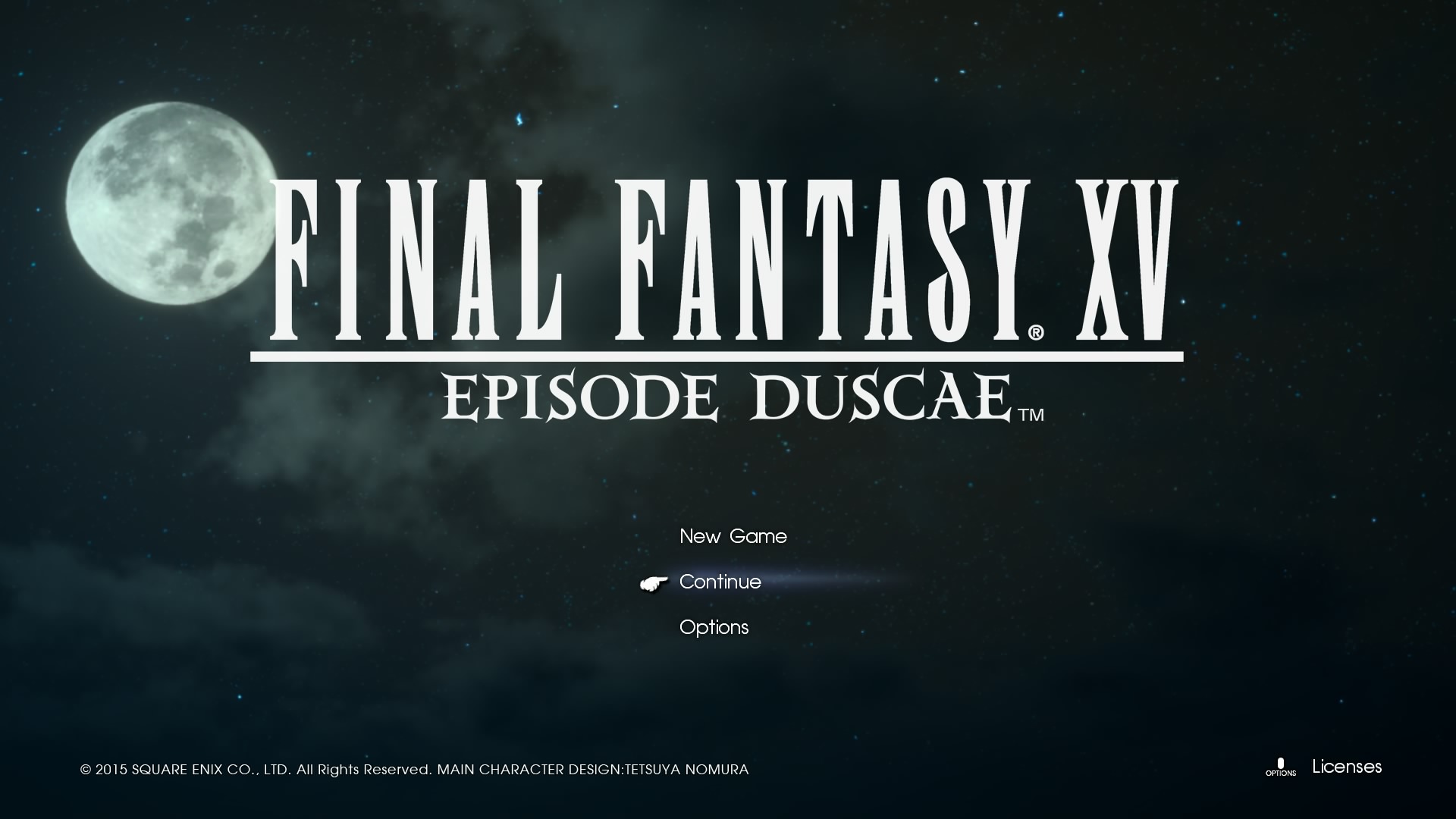 As demos go it's somewhat meaty, longer than many vertical slice style demos. It's also more finished, but that doesn't mean it is release quality. The framerate tanks in combat, and the open world is full of unsightly artifacts, pop-in and unsteady mipping.

The 'Final Fantasy XV' -Episode Duscae- demo features a pretty simple set-up. Four leather clad gents are camping out of necessity; their pretty car has suffered some misfortune and is at the local convenience star/mobile repair shop (complete with Cindy, the pin-up mechanic). One of the gents happens to be some kind of royalty, and he also happens to be the player character. 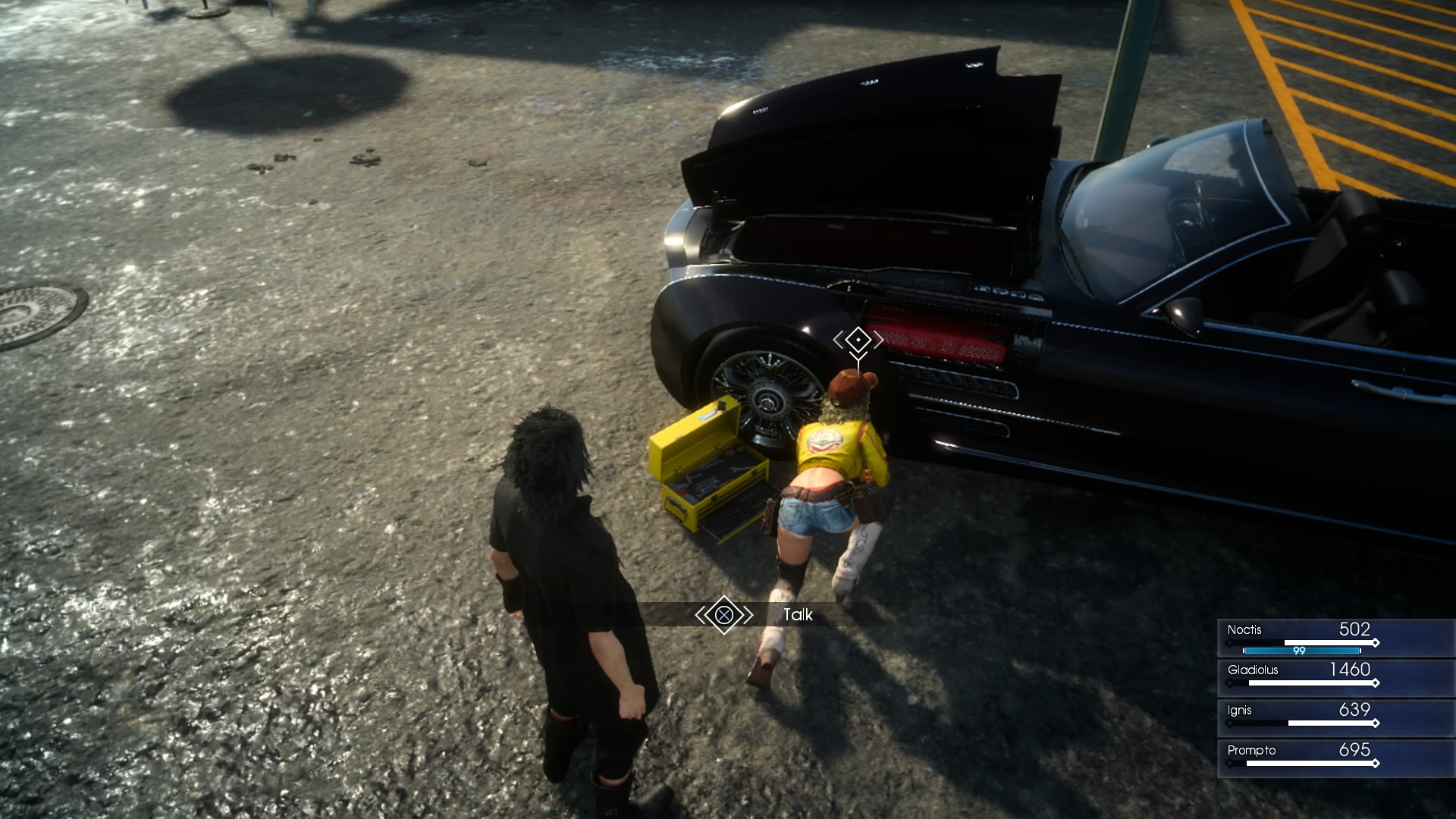 While Noctis may have a regal name, he's a bit shy on the kind of money needed to fix a car. Likewise, the local Chocobo rental office is having downtime. Fortunately, there are wanted posters splashed all over the countryside that promise a big bounty for a great big set of behemoth horns. And thus, the group must take up hunting duties in order to get their ride back. 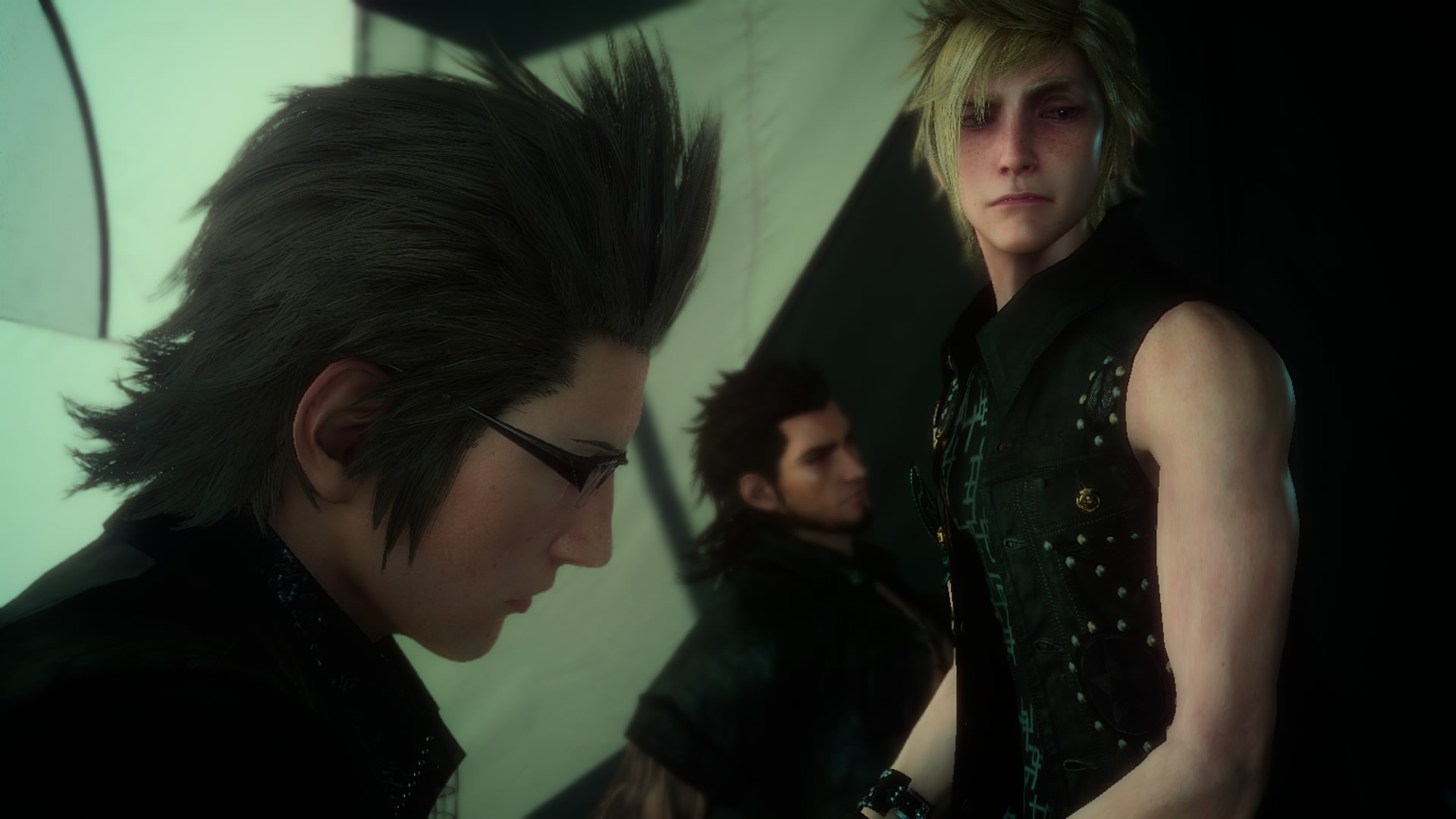 While the story is uninspiring for the most part, the demo's conclusion shows glimpses of something more enticing. The real-time gameplay fairs better, but I'm not sure it ever clicked with me. I am sure that I never had control of the other party members, though I could direct them to take potions, and they were good about following me (or teleporting ahead) when I avoided combat.

And I avoided combat a lot. The warp attack, warp away system, the parry system, and the arbiter system all seem promising, but fighting the imps and annoying sabertusk creatures over and over was not enthralling. The MP Statis system has a workable dynamic, but I hated how during certain scripted fights, my party members left me to stagger. Noctis' thin air weapon set is very cool, and I'd like to see the potential depth of that play out. Right now though, the packs of enemies and my party members just turn into a big furball. (Enemy soldiers were better about this, but when I fought them, the sabertusk creatures waded in anyway.) Waiting in hopes of getting a parry opportunity seems pointless. One special attack I earned and used was above all of this mess, and it did good job of reminding me that magic is more than just an augment. 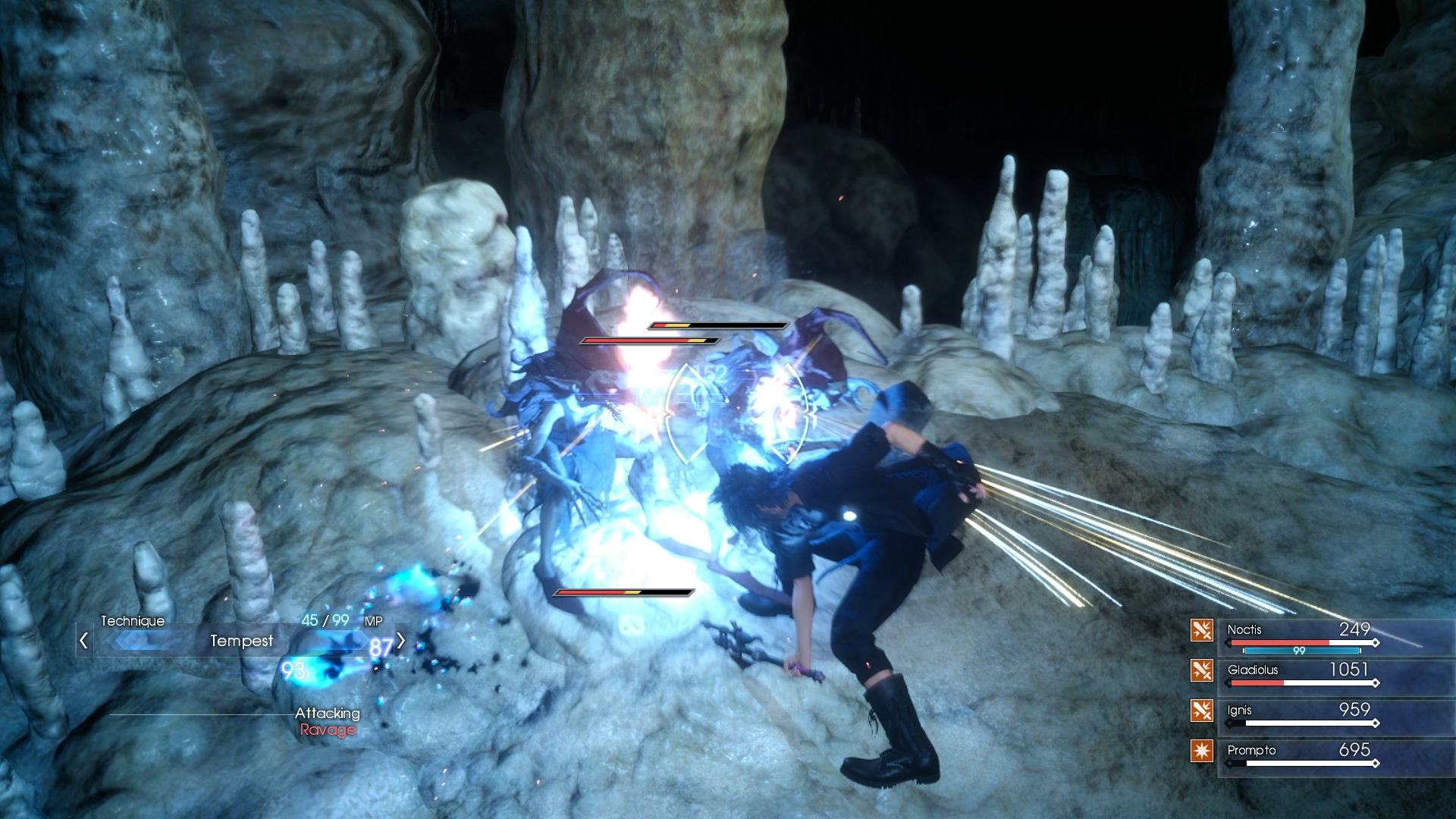 The game's camping and cooking system plays well with the day/night cycle, but the whole monster hunting task feels like too many other games. The stealth and scripted squeezing between the rocks sequences, though different from the open world wandering, lacked the gravitas necessary to make them interesting, which is admittedly tough to instill in a demo.

I saw at least a dozen characters and creatures in the demo, and they look very new-gen. Noctis' red boot tread is as eye-catching as anything else. The forested wetland setting, complete with caverns, lacked for personality even though some big beasts dot the skyline. The poor performance and uninteresting locale holds the demo back from being demo worthy in spite of the fancy character designs. 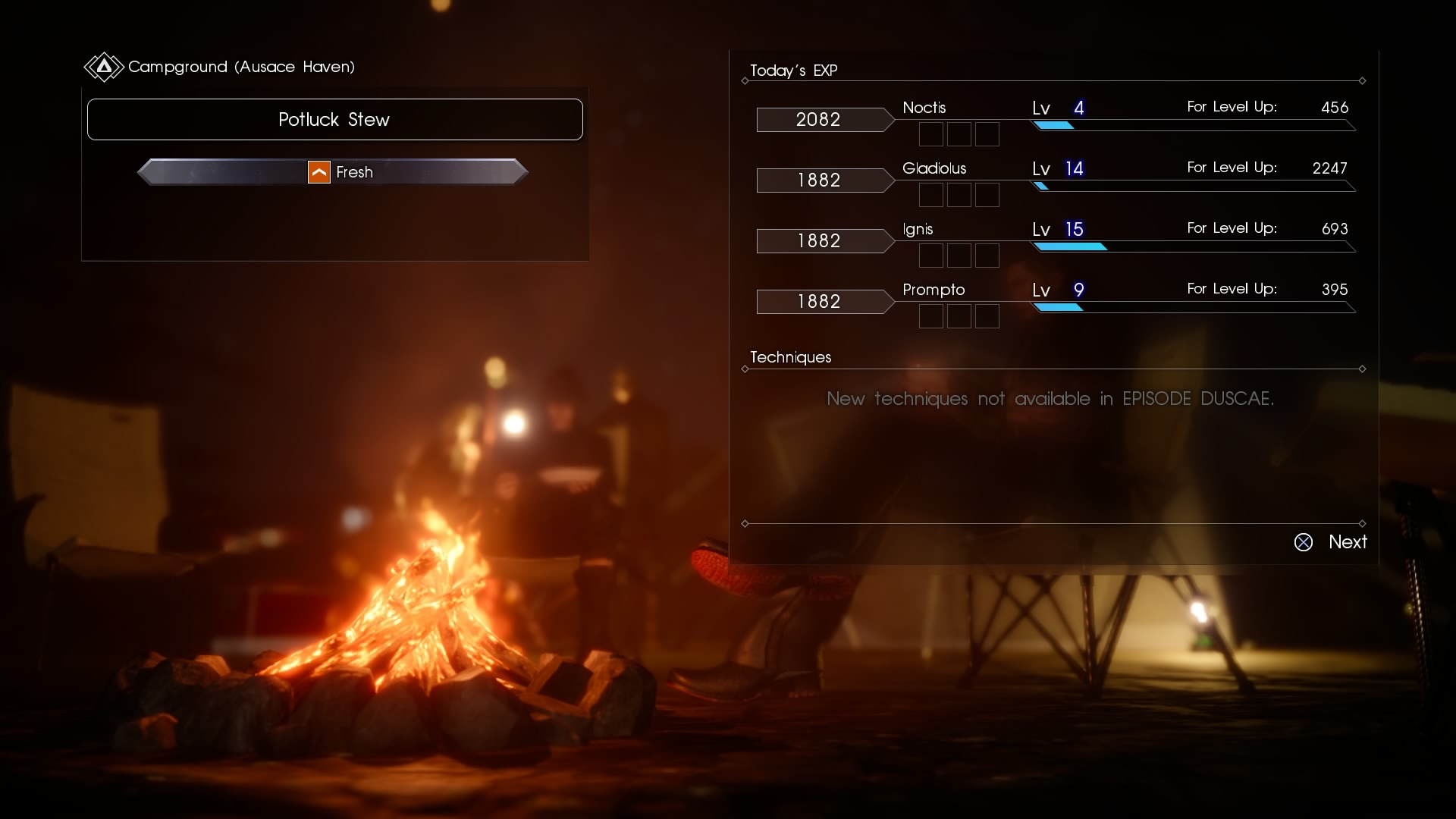 The sound design is fine, but I can't say that I enjoyed the party member banter.

If a demo for an unfinished game is meant to be intriguing (and pretty) then Episode Duscae is a success. If the purpose is to get loads of public feedback, then I expect a success there as well. Having a proper jump and jump button is appreciated, and I've seen enough to know I want to leave the countryside behind and get into one of game's the promising cityscapes. 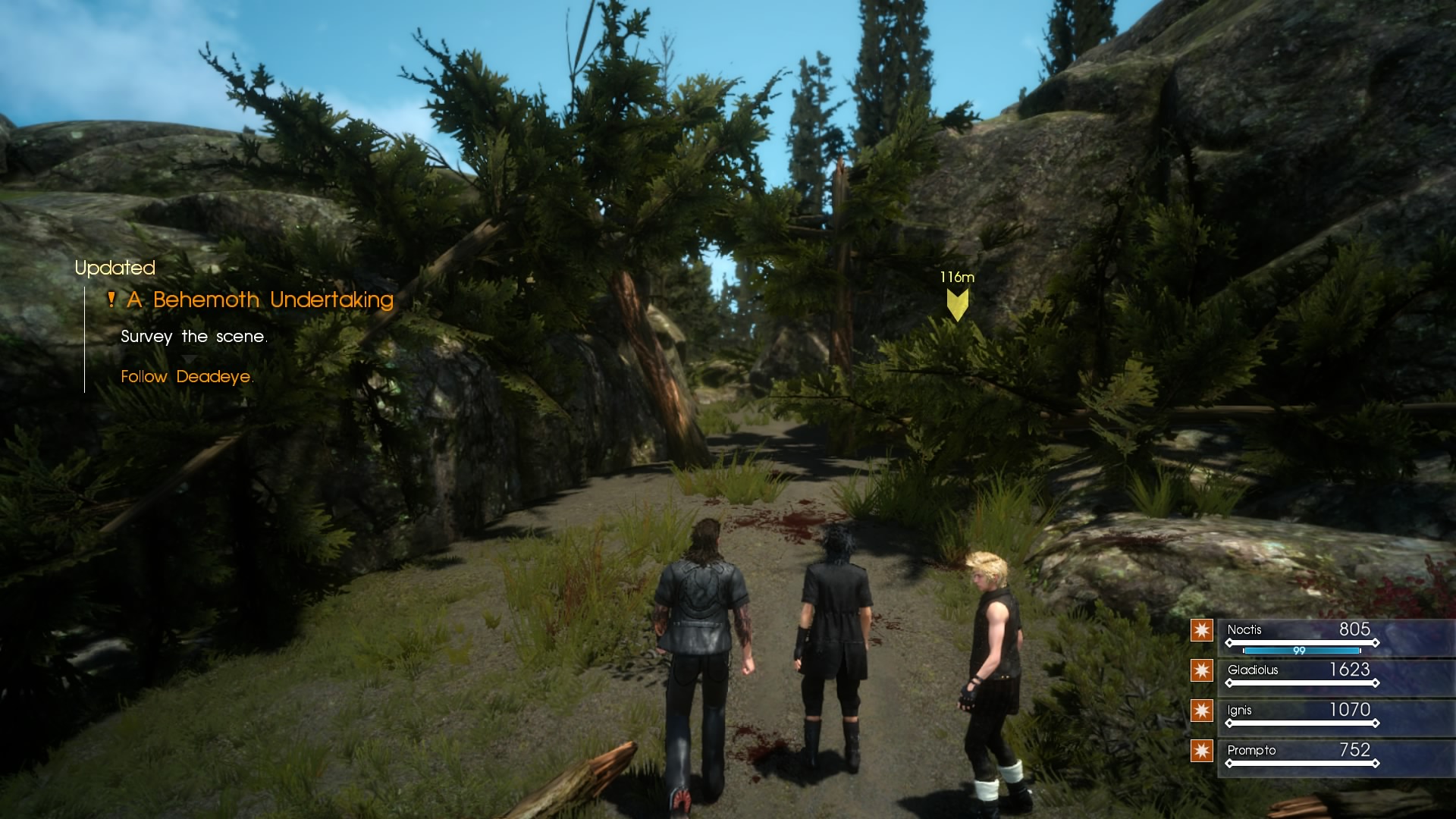 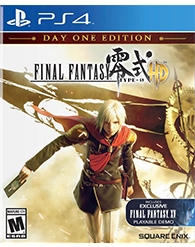