Mewtwo Will Be Available as Paid DLC for 'Super Smash Bros.' for the Wii U & 3DS

Nintendo has already scored huge with 'Super Smash Bros.' for the Wii U, and the game is poised to be even bigger than the hit 3DS version. Of course, Nintendo is hoping that fans buy both and soon, which is why the company introduced such an enticing Club Nintendo. For those that register both versions before January 20th, there will be a free double CD soundtrack set. And for those that register both copies by March 31st, DLC character Mewtwo will be free for both the Wii U and 3DS. (Registering before January 20th gets users both the soundtrack set and Mewtwo.) 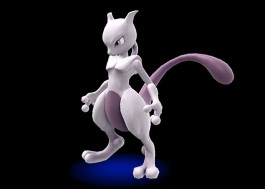 Nintendo announced the promotion a few weeks ago, but now, followed a series of rumors, has clarified that Mewtwo will be available for puchase as add-on content in the future. The question now, is Mewtwo the only piece of paid DLC in the works for 'Super Smash Bros.?' If 'Mario Kart 8' is any indication, then no.