With 'Tom Clancy's The Division' just a few days away from release, Ubisoft has shared their plans for supported the game post release during the next year. For sure, the paid DLC plans have already been announced (see here), but it turns out that some significant paid updates are also on the way. Chief among these updates, which are planned for this spring, loot trading has some weighty importance. Meanwhile, Incursions, which are described as requiring advanced squad teamwork abilities, could be the raid-type event that many players will be demanding before too long. 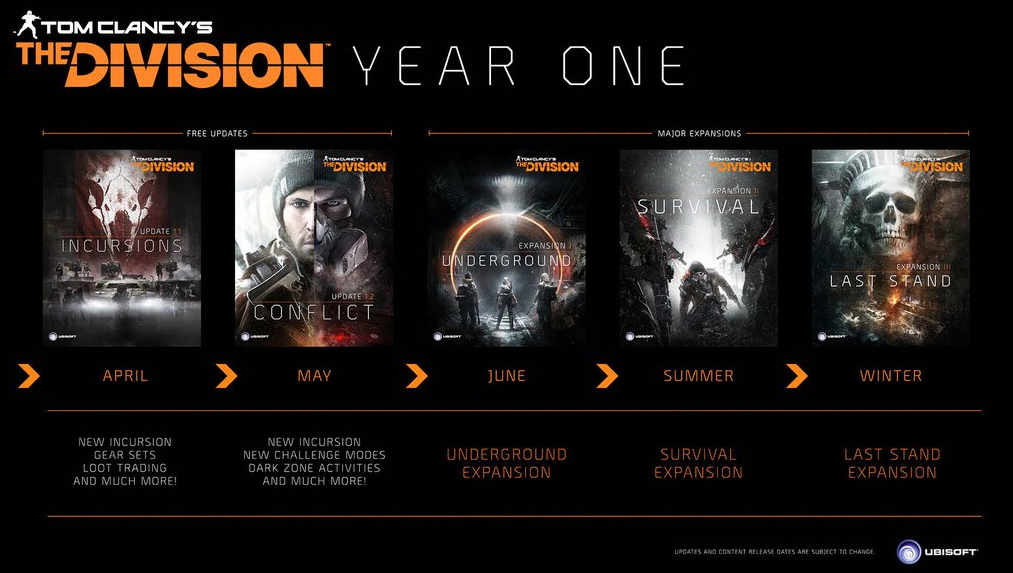 Incursions: In April, the first free update will introduce the first incursion, a new challenging end-game activity developed specifically for squad play. Teams will be able to test their skills as they face seemingly unstoppable enemies to gain high-level weapons and equipment. This update will also add one of the community’s most-wanted feature, loot trading; allowing players in the same group to trade loot collected during a co-op game session.

Conflict: In May, the second free update will add new features to the Dark Zone and add a new incursion in the iconic Columbus Circle.

Paid expansions, which can be had with the Season Pass, Gold Edition and Collector’s Edition of the game:

Expansion I: Underground Available in June, this first major expansion lets players explore the uncharted underworld of New York City. Players will chase deadly enemies with up to three other Agents through an endless maze of tunnels and subways.

Expansion II: Survival Available this summer, this expansion will challenge players to survive as long as possible by gathering essential supplies in a very hostile environment.

Expansion III: Last Stand Next winter, a new threat rises as players and their squad must prepare to defend against a relentless foe.

You can find the latest info on 'Tom Clancy's The Division' linked from our Video Game Release Schedule.