At QuakeCon 2016, immediately adjacent to the sprawling BYOC space, Bethesda had a half dozen demo stations set up. These particular showcase area stations offered two different demos, the VR versions of 'Fallout 4' and of 'DOOM.'

Both demos used the HTC Vive, complete with two wireless controllers, base stations, and room tracking. With these demos came with some interesting assurance from Bethesda. Not only could these demos be considered a follow-up to the 'Fallout 4 VR' that was introduced at E3 2016, but going even further back, like all the way back to E3 2012 and 'DOOM 3 BFG,' Bethesda was working on a VR experience.

With that 2012 duct tape headset experience well in the rearview, I approached these VR demos with both some excitement and with the similar sentiment that I wind up applying to every VR demo in 2016. That is, "how close is this to being ready to release?" and "is it a play once or a something meatier type experience?"

On the face of it, 'Fallout 4' in VR has a lot going for it. I have sunk a lot of hours in to 'Fallout 4,' but I would love an excuse to sink some hours in. It's not that the DLC doesn't fit the bill, but different hardware makes for a different allure. Ideally, DLC meant for the VR could be great, but the conventional game- the combat, exploration, questing, crafting, and so forth seems like a great application for VR, provided there is room to walk around. 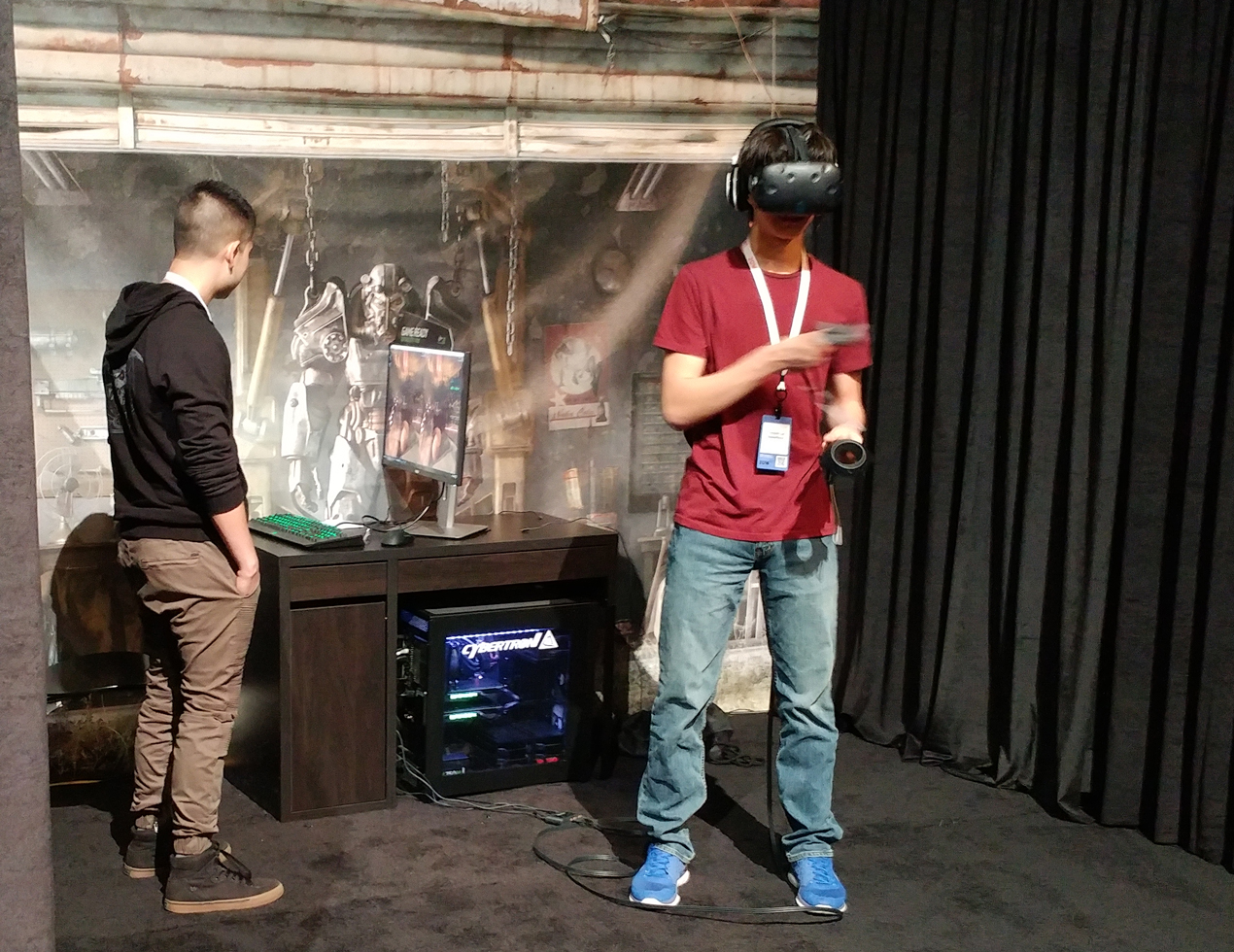 The actual demo fell short of these expectations. The demo station was not spacious, and I mostly had to use a teleport feature to move my character around. (Hold the trigger on the left wireless controller point to spot I want to stand next, let go, and bam, I'm there.)

I started outside the familiar Red Rocket next to a table of familiar weapons. I had to reach out and grab each weapon I wanted. Once acquired, I could switch by swiping on the right wireless controller touchpad. I wound up using a Laser Rifle and the Fat Man, which came in handy as I was assailed by ghouls and deathclaws in waves. Inside the Red Rocket, there was a lot junk that I could pick up and toss toward Dogmeat. 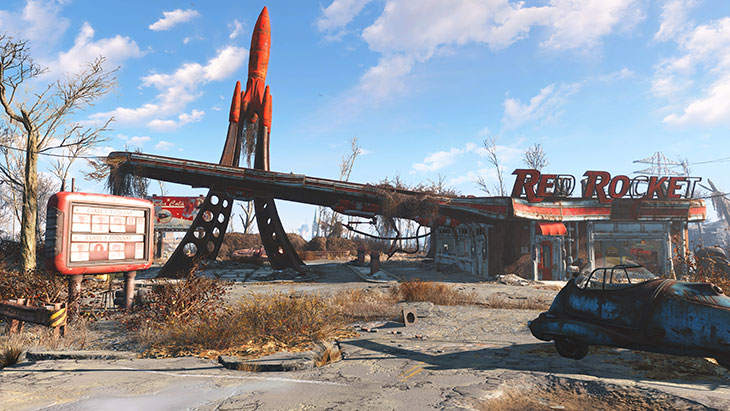 To be honest, hanging around Red Rocket is not something I really wanted to do, but the person running the demo become quite agitated every time I wandered away. No matter how much like a demo environment this tried to be, there was a whole sprawling map that I know pretty well waiting.

One major highlight for me was being able to use the Pip-Boy just by looking at my left arm. I've used second screens apps aplenty but nothing was a natural as this. It invokes fond memories of 'Far Cry 2's in-game map and vehicle GPS. Again, I would have enjoyed it more if the demo staff had taken a few deep breaths.

Finally, I was able to head over to Concord, and shock of all shock, Preston Garvey was there embroiled in a last stand. My unlimited arsenal of mini nukes turned the tide, and yes, aiming the Fat Man using the VR set-up in a battle I've fought a least a half dozen times before was fun. As I headed into the Museum of Freedom, the demo staff announced that that the demo was over. Regardless of their timing, the inside of the museum loaded just fine.

The VR part of 'Fallout 4' is promised for public release in 2017. It's fair to say that movement appears to me to be the biggest challenge. Getting to look around in VR in what is a proper game is pretty great. (The visuals of 'Fallout 4' aren't the best, but the scope and breadth is hard to beat.)

And of course, the movement challenge is something shared in the 'DOOM' VR. Count me in as a fan of the new 'DOOM,' as I really have been since playing it first at QuakeCon 2015. The 'DOOM' VR started out in a kind of trophy room with just a few character models on tables that I could mess with it. 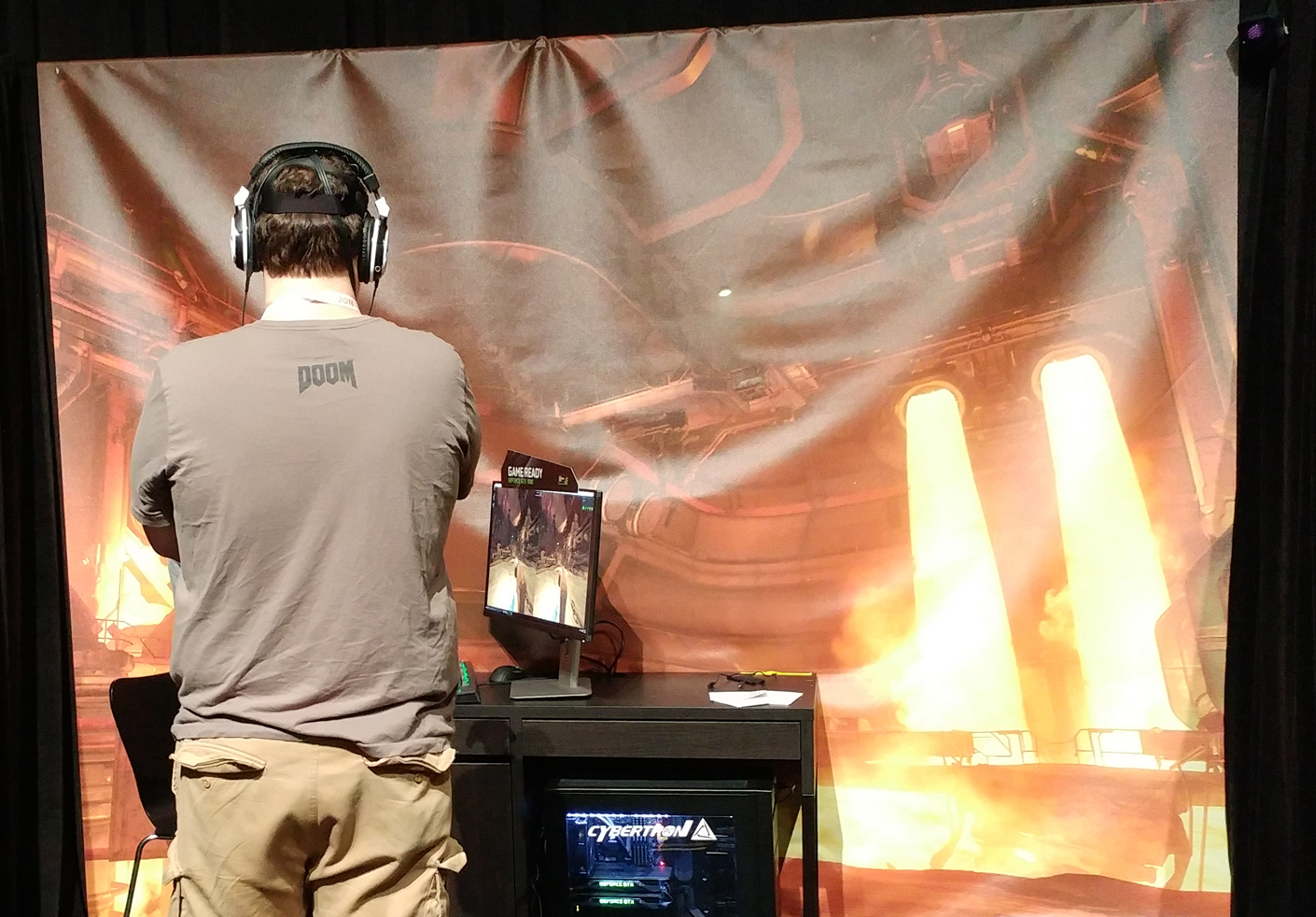 It did get better in the next few rooms, wherein I was fighting using favorites like the Rocket Launcher. Again, I felt I had to use the teleporting wand to get around as I mainly used my actual legs for turning around. Unlike the released 'DOOM' game, the in-game VR demo rooms felt very tightly confined. There was only one area that featured different elevations and that made me feel like I could move in a fun circuit. Other rooms, like the stand-still tester, call to mind VR tech demos of '14-'15. I think the main takeaway here is that the 'DOOM' campaign has a very finished quality that isn't felt in this early demo. I've done plenty of shooting in VR, and at this early stage, the quick movement of 'DOOM' hasn't yet translated. It's nevertheless promising. One thing I really liked was dropping cooking grenades in front of bigger enemies (and then running away).

I imagine that this 'DOOM' VR demo was cooked up pretty quick by a smallish team, so it should only improve. I could see a game like this using a lean technique for free-running (lean forward and run forward, lean back and run back, and so on.)

VR demos are tough, in part because all of the hardware needs to be working, and in part because it's hard to nail that right mix of hand-holding and helpful direction. Bethesda's recent VR efforts have an extremely high ceiling. I'm looking forward to seeing more.