Discounts will be offered on runners-up.

The September PlayStation Plus games have not yet been announced, but we do know three games that are strong candidates to be free. Starting Thursday as part of Sony's Vote to Play program, PlayStation Plus members can log onto to their PS4s and vote for one of three candidates. The winning vote getter will become one of September's free PS4 PlayStation Plus titles while the two other games will be discounted. 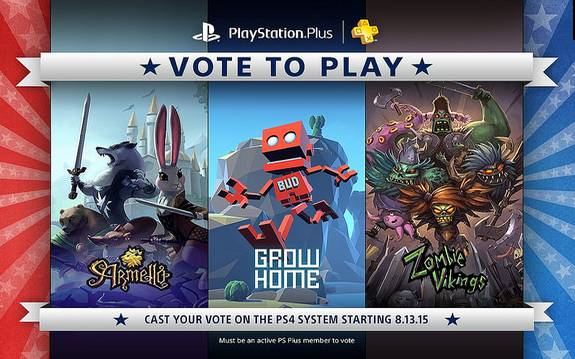 Here are the candidates:

'Armello' - a card-based fantasy board game which has been in Steam Early Access since January.

'Zombie Vikings' -a 4 player co-op brawler (presumably full of putrid humor) from Zoink Games, developer of 'Stick it to the Man!' (review here).

Having already played 'Grow Home' on the PC, my vote is split between 'Armello,' which has a slight edge, and 'Zombie Vikings.'

Vote to Play is likely to be a reoccurring promotion. While members will pick one upcoming game, there will still be multiple games added to the Instant Game Collection. The voting will start on Thursday, August 13th at 8:30am PT and will end Monday, August 24th, at 8:30am PT. To vote, PlayStation Plus members can access Vote to Play from their PS4 notifications.