Today, of course, is April 1st. Which means, if you've been coming to the internet from a place of cautious skepticism before, today's a fine day for a tinfoil hat picnic. It's the worst possible day for any big news of any kind to drop, and if you specialize in humor, it's an easy way to look dumber than normal (though, we swear, if we run it today, WE WILL CONFIRM IT'S LEGIT). For gaming, of course, it's a great day for really dumb jokes by otherwise smart companies, or a day for too-good-to-be-true announcements to be completely glossed over, or believed, and profound disappointment to overtake everyone.

There is, of course, a right way for those in the business of gaming to put a smile on everyone's face, and still keep dignity intact. It involves foresight, intelligent, good heart, and good faith. Which, we know, rare as civility in politics. But it can be done. And before you post that "Sega To Make A Dreamcast 2" story, you might want to have a look at the five times the world of gaming aced April Fools.

Every couple of months, the long-since debunked rumor that Netflix is creating a live-action 'Zelda' series shows its stupid face on the internet, and every savvy gamer has to sigh, and explain, calmly, how the late Satoru Iwata shot that sucker down last year.

One can't help but think it all has roots in IGN's 2008 April Fool's gag, in which they produced a very slick, full-fledged live-action trailer for a Zelda movie that was not to be The budget shows itself in spots, but it works as a proof of concept, and even divorced of April Fools, it's still a fun little, well produced piece of fan-film that IGN's yet to top (and not for lack of trying).

Google's usually good to gamers on April Fools, especially through the Maps app, with stuff like playable Pac-Man, and 8-bit Google Maps for NES.

2014's gag may have been one of the best, though, as Google set up a Pokemon challenge. The parody version was more of a worldwide geocache hunt which supposedly awarded the winners with a legitimate position at Google as a Pokemon Master.

The reality, of course, was a bit more pared down, but not by much. What it really was was the ability to activate a feature on Google Maps which scattered Pokemon icons all over the world, and you could search and scroll through every city, state, country, and continent on Earth to try and find the things. Plenty of people laughed when they got the joke, then spent ALL DAY trying to hunt down all 150. Apparently, a few folks did, and true to their word, Google sent them company masthead business cards with their names, branded with the title of Pokemon Master. 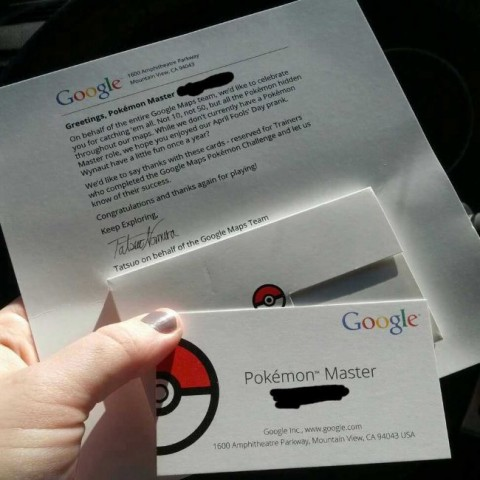 Probably the most evil gag, but one worth pointing out for its ubiquity, its simplicity, for being first, and, of course, for crushing all our dreams. Very simply, someone made a subtly spoofed version of the Steam storefront, with the simple logo seen there. Which, as you expected, led to this image when clicked. 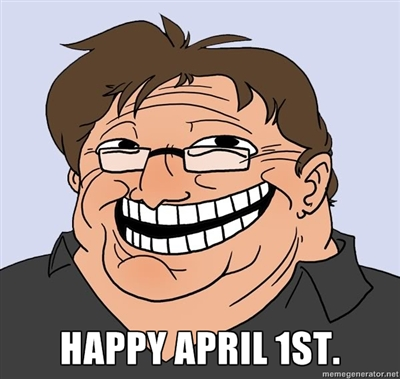 And yet, speaks volumes that nobody considers it worse than Valve setting up the damned thing at the end of Episode 2 to begin with,

If someone was weird enough to want to crown a 'Citizen Kane' of Gaming April Fool's gags, this'd be the winner. In the April 1992 issue of Electronic Gaming Monthly, EGM, when previewing the upcoming SNES port of Street Fighter II, dropped a bombshell of a secret, revealing that Ryu's classic match-ending taunt "You must defeat Sheng Long to stand a chance!" wasn't just some empty threat. Ryu's master was real, and in the game. 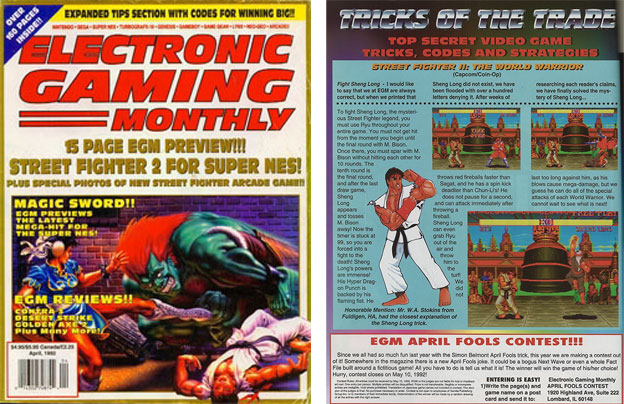 It should've been a red flag right up front when folks read through how to unlock the fight against Sheng Long, which involved 1, lining up 11 Perfects in a row when going through the regular arcade mode, and 2, fighting M. Bison without inflicting damage on him, or him inflicting damage on you. At which point, Sheng was supposed to toss Bison offscreen, and you had yourself a fight to the death with an infinite time limit.

Keeping mind, these were halcyon days for fighting game rumors and conjecture. Let's not even go into all the bogus  'Mortal Kombat II' or 'NBA Jam' character rumors that ran rampant (a couple, like Rain, Ermac,  and Noob Saibot, ended up going legit anyway). But even by comparison there, that gag went WORLDWIDE, with just about every legit game publication running the rumor. EGM ran with it for eight insane months until finally mentioning in the December issue that it was, indeed, an April Fool's gag. But the damage had been done. Long was part of 'Street Fighter' legend, which ultimately led to Capcom, around the time 'Super Street Fighter Turbo' came around, figuring that maybe EGM was onto something....

This one earns a special place for the perfect long double-con, a long-standing rumor whose visibility peaked at just the perfect time to plant the seeds of reasonable doubt that Ubisoft would pull the rug out from under everyone. There was box art, 80's VHS covers, an achievement list that seemed too silly to possibly be true. The only signs prior to April 1st that the game might be real being, as per usual, ratings board classifications, but even, the doubt was there. It didn't help that UbiSoft had created a full fledged, gag-filled website, complete with director interviews, and released an 80's VHS inspired trailer for the game on April 1st.

We all had a hearty laugh, and then, after the smoke of April 1st 2013 had cleared, everyone kept waiting for Ubisoft to do their two-step, yell ta-da, and reveal the game as fake.

And then, they didn't.

'Blood Dragon' was/is 100% real. And spectacular. Prior to 'Primal', 'Blood Dragon' was the most unique, enjoyable thing Ubisoft had done with the 'Far Cry' formula, and years before 'Kung Fury' and its ilk, it managed to capture the best/worst of bad 80's action/sci-fi, bolstered by a so-very-game Michael Biehn delivering the best comedic performance of his career. It's possibly the greatest April Fool's gag ever perpetrated in gaming. The kind that wasn't a gag at all.

So, before you hit that send button on that "Sonic and Mario Team Up In M-Rated Title" article, trust us, leave the funny to the professionals.