'TMNT' from Platinum on the way?

Artwork has surfaced which appears to tie into the rumored 'Teenage Mutant Ninja Turtles' linked to developer Platinum Games and publisher Activision. 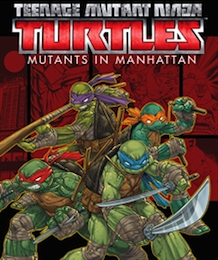 Though nothing has been confirmed, the artwork appears to be from an unpublished Xbox Games Store listing. Ratings for the game indicate it'll be released on PlayStation 4, Xbox One, PC, PlayStation 3, and Xbox 360.

Though unconfirmed right now, considering Platinum has already collaborated with Activision on licensed titles with 'The Legend of Korra' and 'Transformers: Devastation', the idea of them tackling 'TMNT', which Activision works on frequently, isn't terribly farfetched. If 'Transformers' is anything to go by, a similar 'TMNT' game could be a lot of fun, and the license could lend itself very well to Platinum's style of gameplay.