Steam OS Performance Inferior To Windows, According To Report

The first wave of Steam Machines have rolled out this past week, and while open-source gaming zealots are over the moon, there's a chance, if you're moving from a Windows-based gaming rig to this, the average PC gamer might not be, if a new report from Ars Technica is to be believed.

Ars Technica has put the machine through its paces, comparing its performance with a Windows computer with similar specs. There's some serious tech nerdery going on in the actual report, but in plain English, the Steam Machine came up wanting. 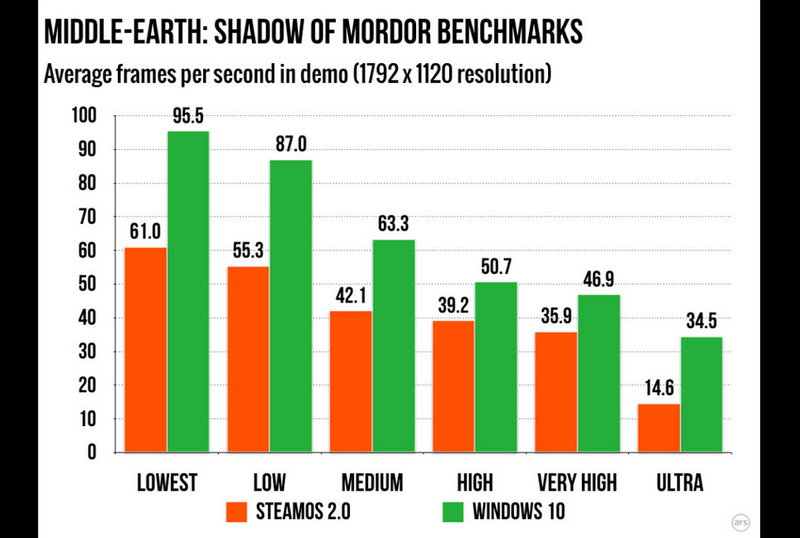 Never minding the slim pickins for game lineup, since a slew of titles available on Steam for Windows aren't available on Steam OS, they ran a series of performance tests, using 'Metro: Last Light' and 'Shadow of Mordor' as their guinea pigs. The result? "...running these two high-end titles on SteamOS comes with a sizable frame rate hit; we got anywhere from 21- to 58-percent fewer frames per second, depending on the graphical settings. On our hardware running 'Shadow of Mordor' at Ultra settings and HD resolution, the OS change alone was the difference between a playable 34.5 fps average on Windows and a stuttering 14.6 fps mess on SteamOS."

Now, could it be possible it's just because those were Linux ports not necessarily optimized for the platform? Unlikely, but sure, whatever helps you sleep at night. And by their own admission, the report isn't as comprehensive as it could be, but more telling is when Ars Technica tested Valve's own titles, none of which are terribly hardware intensive. You probably have a computer in your basement that runs 'Portal' pretty good. And while, of course, the games are still very playable, " Valve's own Source engine games showed the same performance hit when compared to their Windows versions. 'Portal', 'Team Fortress 2', and 'DOTA 2' all took massive frame rate dips on SteamOS compared to their Windows counterparts; only 'Left 4 Dead 2' showed comparable performance between the two operating systems (though there's no sign of those SteamOS frame rate improvements Valve cited years ago)."

Considering these things were meant to try and erase the need for a dedicated gaming PC, we're looking at a pretty weaksauce state of affairs for Steam's little experiment, here, one that hopefully somebody's able to crack with a strong port or two.