Only an alpha and I’m thoroughly hooked.

'Rimworld' is currently in development by Canadian studio Ludeon. They are gearing up for their entry into Steam's Early Access after being available direct from developer since early 2014. They successfully raised over $250,000 CAD on Kickstarter and have sold more than 120,000 copies themselves. The Early Access release coincides with Alpha build #14, which adds custom scenarios into the mix. Ludeon also plans to include deep modding tools.

The game is a science fiction colony management sim, with heavy survival elements. In every playthrough, several commercial spacecraft passengers land on a rim world, far from civilized space where each planet can have vastly disparate levels of science and technology. They start out with nothing except their own personal skills, the most basic of tools, and a small cache of materials and processed food. From these humble beginnings they are tasked with creating a self-sufficient colony/city with all of the modern trappings of civilization, like security, medicine, renewable food sources, recreation opportunities, and so forth. 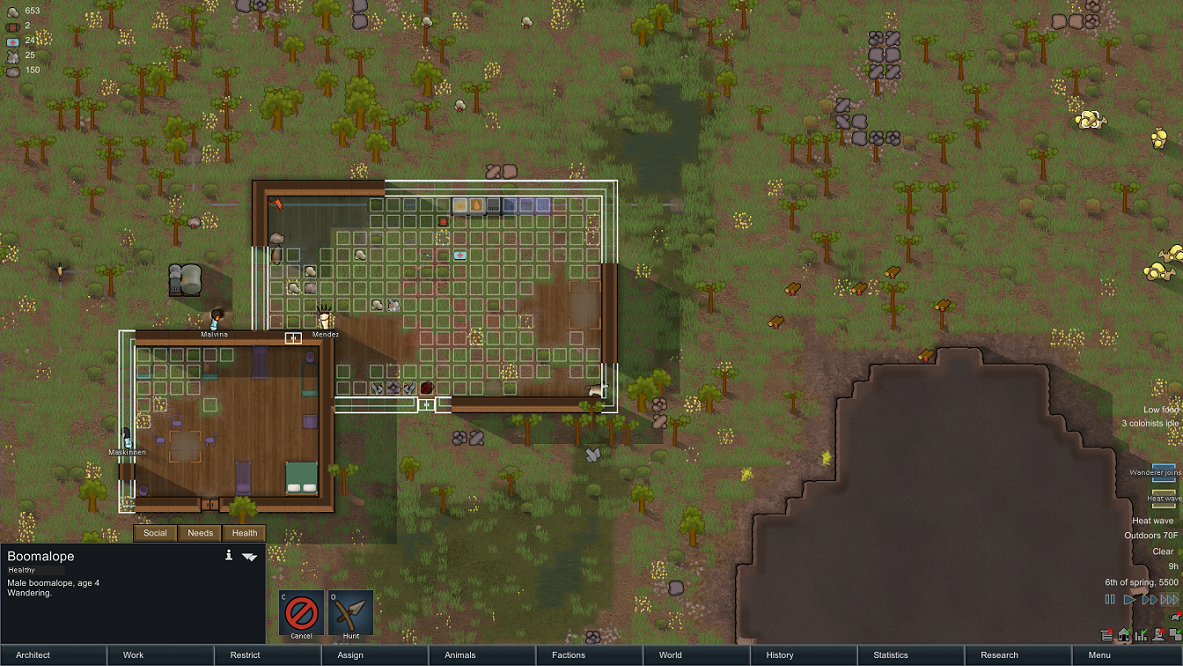 Because these people are regular humans and did not train to be colonists, they're relative value varies greatly. They are not equal in the slightest. My first group included a medical doctor, a farmer, and an "empath" which I thought would mean some kind of clairvoyant, but she just turned out to be a really lazy psychiatrist. Even in this early stage of development, 'Rimworld' has a very deep system of behavior and learning for the colonists. Tasks can be micromanaged or delegated through a system of priorities. For instance, I had a smart analyst who wasn't good at much besides researching and cooking (and the latter very poorly), so I unchecked all of his boxes except for research and voila, we have a research bot who eats and sleeps occasionally. The other colonists have to do all of his chores now, but at least they're rewarded with gradually increasing tech for their troubles. 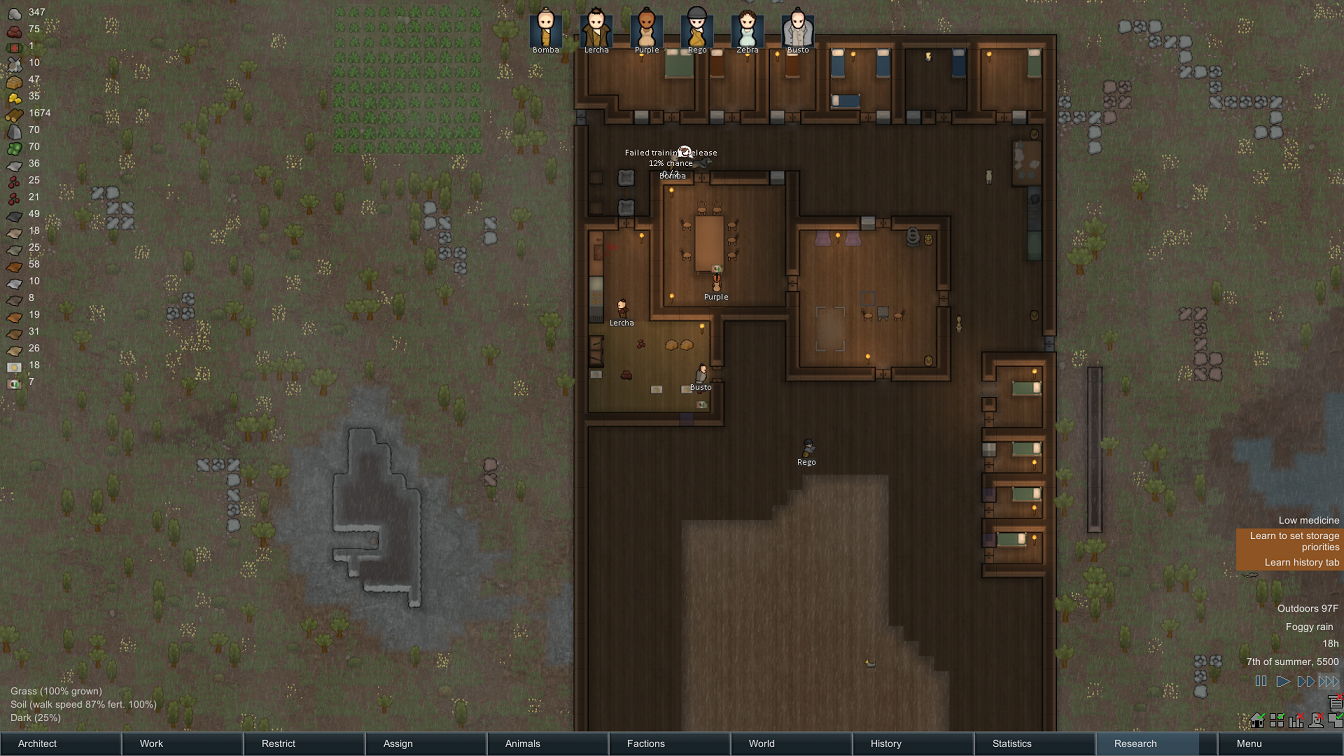 The early game is similar to any survival sim: craft a decent base, find food, mine and chop things, etc. The interface is not at all what I am accustomed to, but after playing for a couple of hours it became second nature. Instead of personally queuing up each individual work order for each colonist, I simply place a blueprint and the available workers go about the business of creating it as time allows, in accordance with their skill priorities. So, my engineer spends a lot of time building things, assisted occasionally by another colonist with unrelated skills. That colonist cooks, cleans, and does general hauling - a homemaker of sorts. Checking all of the boxes for all skills makes a colony full of jacks-of-all-trades, but literal masters of none. Division of labor is the key to success in 'Rimworld.' 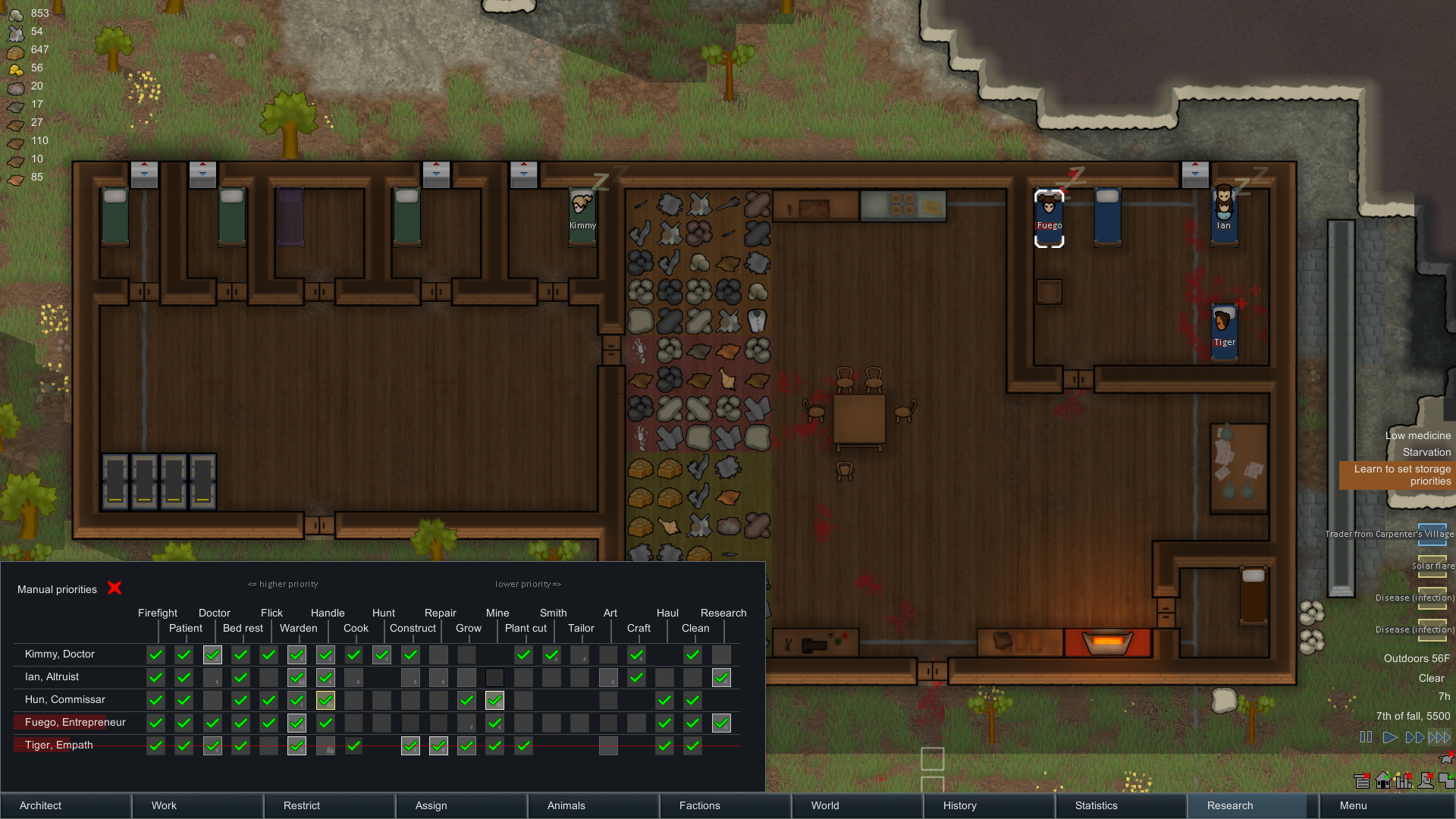 Despite its alpha status, all of these mechanics work pretty well. I ran into a few bugs and mishaps along the way, some of them easily fixed and others completely mystifying. In general, however, the process of slowly building up my colony is very entertaining. Colonists have a massive amount of stats and needs, kind of like 'The Sims' except that these people tend to complain a lot less. They don’t like starving, seeing decomposing bodies, sleeping in filthy rooms, etc. kind of like real people. They have personality types that can influence how well they work with others. My doctor is genial and can parley pretty well with prisoners I collect, but I also have a skilled murderer who is abrasive. She has been banished to the perimeter of the colony where she keeps an eye out for bandits and pirates, and away from my more delicate personnel. 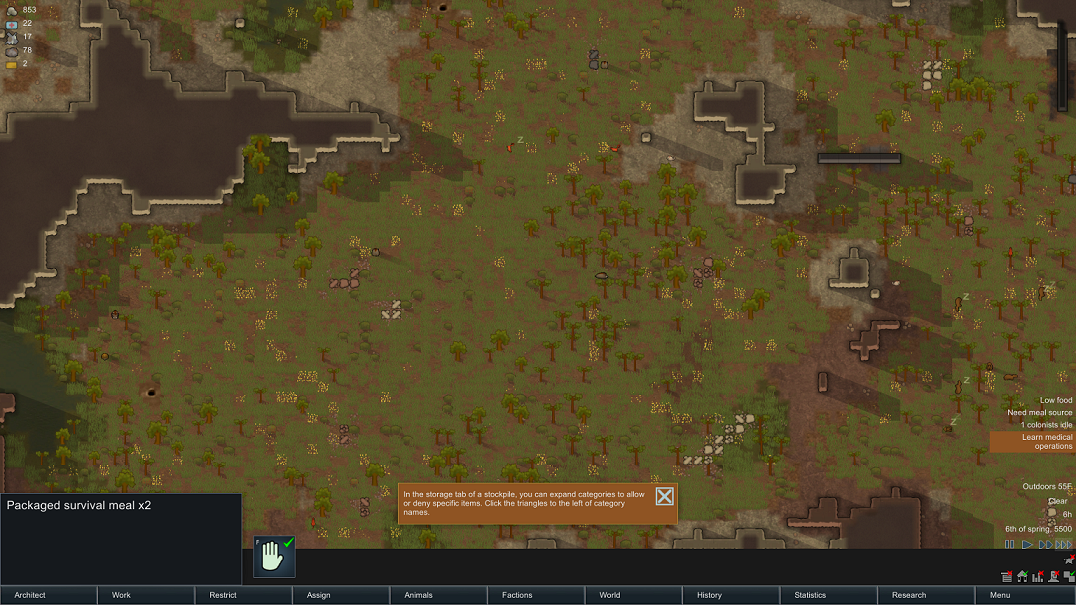 The enemy, if it could be characterized as such, is an AI that hits the player with events as the colony grows. Currently there are three personalities: Phoebe Chillax, Cassandra Classic, and Randy Random, my favorite. Phoebe and Randy work just like their names would suggest, while Cassandra is the default AI that has a curve of events based on time played. These events can be benign and easily ignored, like the periodic arrival of peaceful neighbors who want to trade, or it can be debilitating, like a long heat wave that can kill colonists who aren’t prepared. I usually go with Randy because the stuff he drops on me is crazy, like wacky animals and groups of heavily armed raiders I can imprison, enslave, recruit, and/or sell their organs for silver. 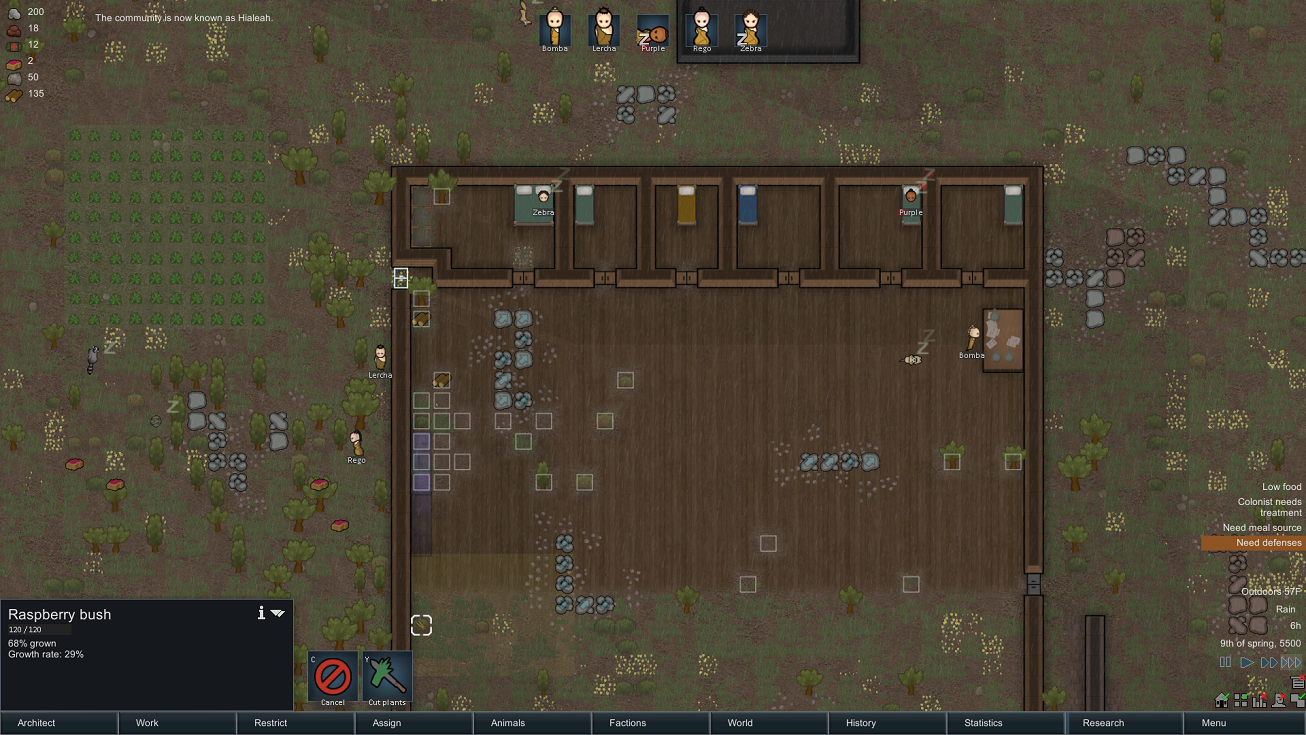 Alpha update 14 includes a scenario editor, which can be used to make more specific starting conditions and colonist groups when creating new worlds. There are only a couple of default scenarios, like a lone, wealthy explorer and a group of 5 tribals, but many more can be randomized and customized. All colonists can be old, creature taming can skyrocket, more supply pods, and a lot more. Scenarios deepen the amount of content and are particularly nice when the default mode has been played out. 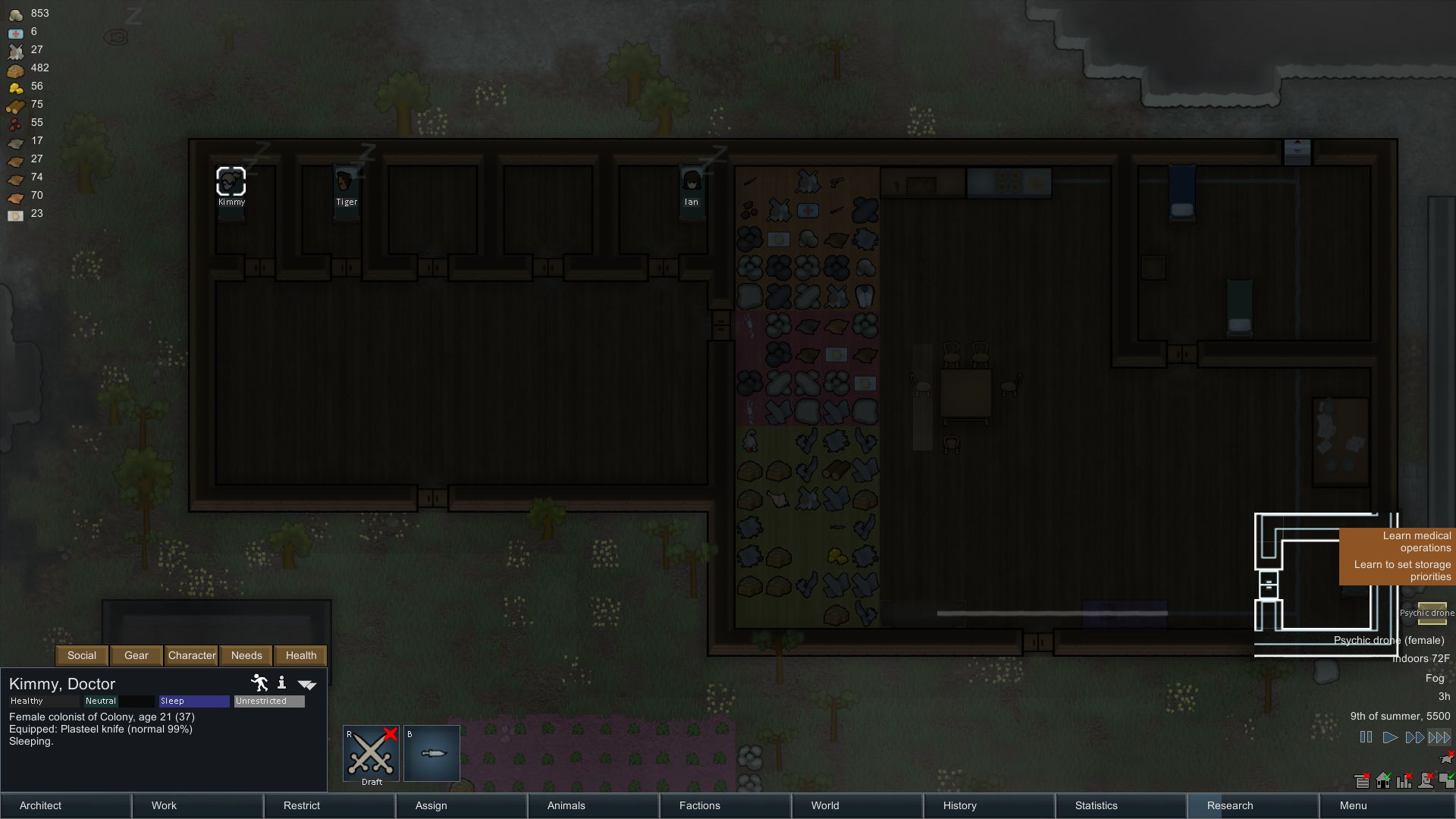 'Rimworld' is one of the most interesting survivals I have played recently. It has a huge amount of content already, and the scenarios and mod support will add even more. It looks a bit rough and has some bugs, but is in an impressive state for such an early alpha. We’ll be watching its progress with great interest. ('Rimworld' will enter Early Access in Steam on July 15th, find it here.)