A quick look at some recent indies.

In this piece we’ll be taking a look at three small indie games on Steam and hashing out their strong and weak points. The games included are 'Acorn Assault: Rodent Revolution', 'Mr. Nibbles Forever', and 'Spunk and Moxie'.

'Acorn Assault: Rodent Revolution' is a turn-based strategy title from High Tale Studios. It casts the French Revolution in squirrel form, as Charles DeMontesquirrel defends his hard-earned acorns against King Louis the Umpteenth and his despicable tax collectors. The gameplay is quite similar to 'Might and Magic: Clash of Heroes', which used a mix of strategy and more accessible match 3 gameplay. The two squirrel armies occupy a grid facing one another. Each turn, I was given a set of barrels and squirrels to set up on the grid to shoot my opponent and defend my own home from being shot. Similar pieces placed next to one another will combine into a tougher unit. Acorns collected on the board can be used to buff an army’s stats right before the firing phase. 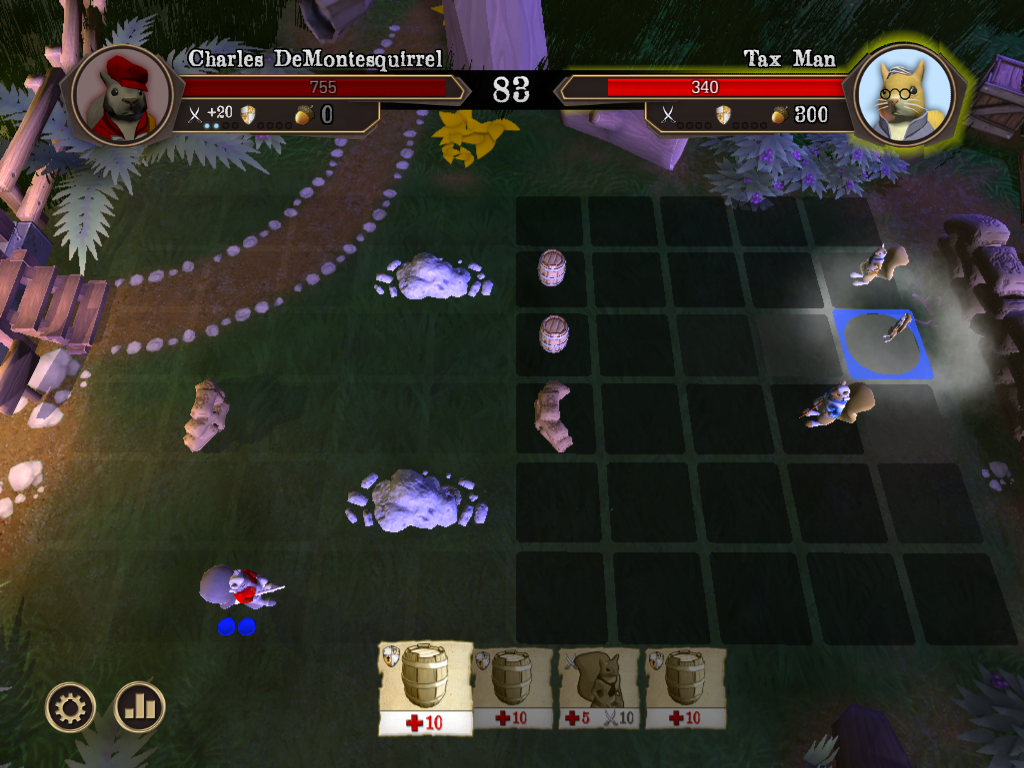 That about sums up the gameplay. 'Acorn Assault' never goes deeper than that, and the sole strategic consideration is whether to leave a lane undefended in order to open up an opportunity somewhere else, or play conservatively and defend all the time. The difficulty gets higher after the third battle or so, but less in a challenging way and more in a trolling one. The enemy commander would simply steal any acorns I had collected the previous turn, mitigating my ability to buff my troops. There is a derivative humor amongst the squirrels, riffing from pop culture, but the jokes are pretty lame. It could perhaps be appreciated by a much younger crowd, in terms of both gameplay and dialogue, but 'Acorn Assault' isn’t a particularly engaging strategy experience. The content you get at the beginning never really grows, and each battle is more or less the same. 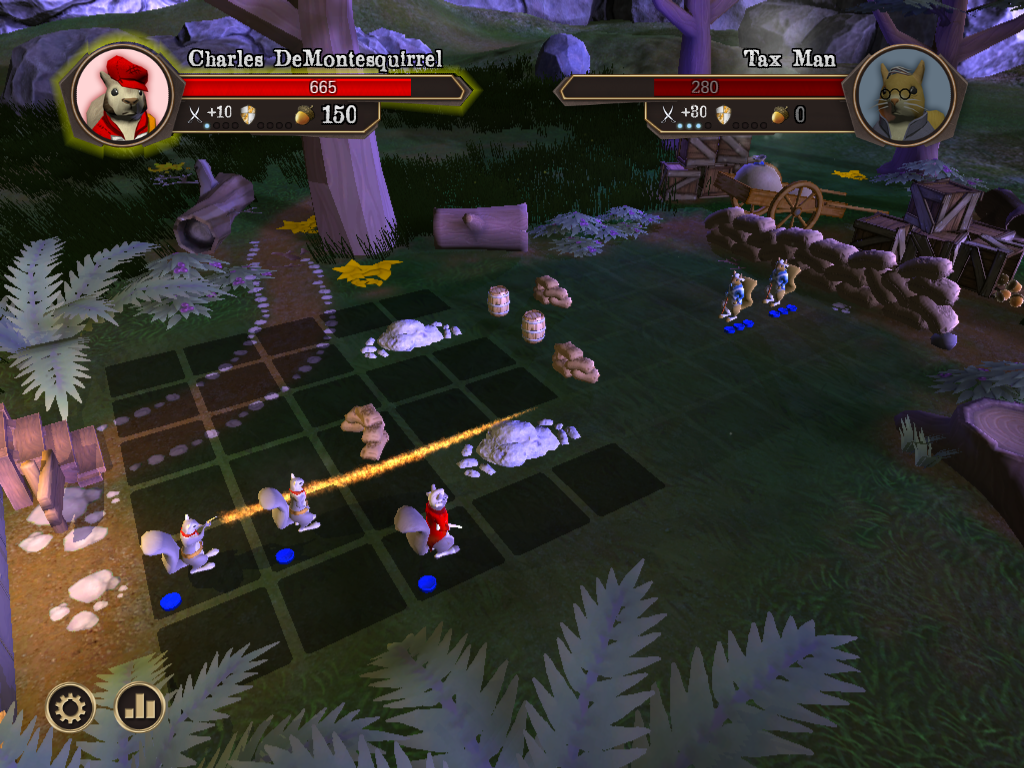 The technical and visual side is about as appealing. Even on the highest settings, 'Acorn Assault' looks and feels ancient. The character models and environments are grainy and lack detail, and the explosions and other effects are simple. Even the Renaissance-style music is repetitive. In short, 'Acorn Assault' is a game best avoided. 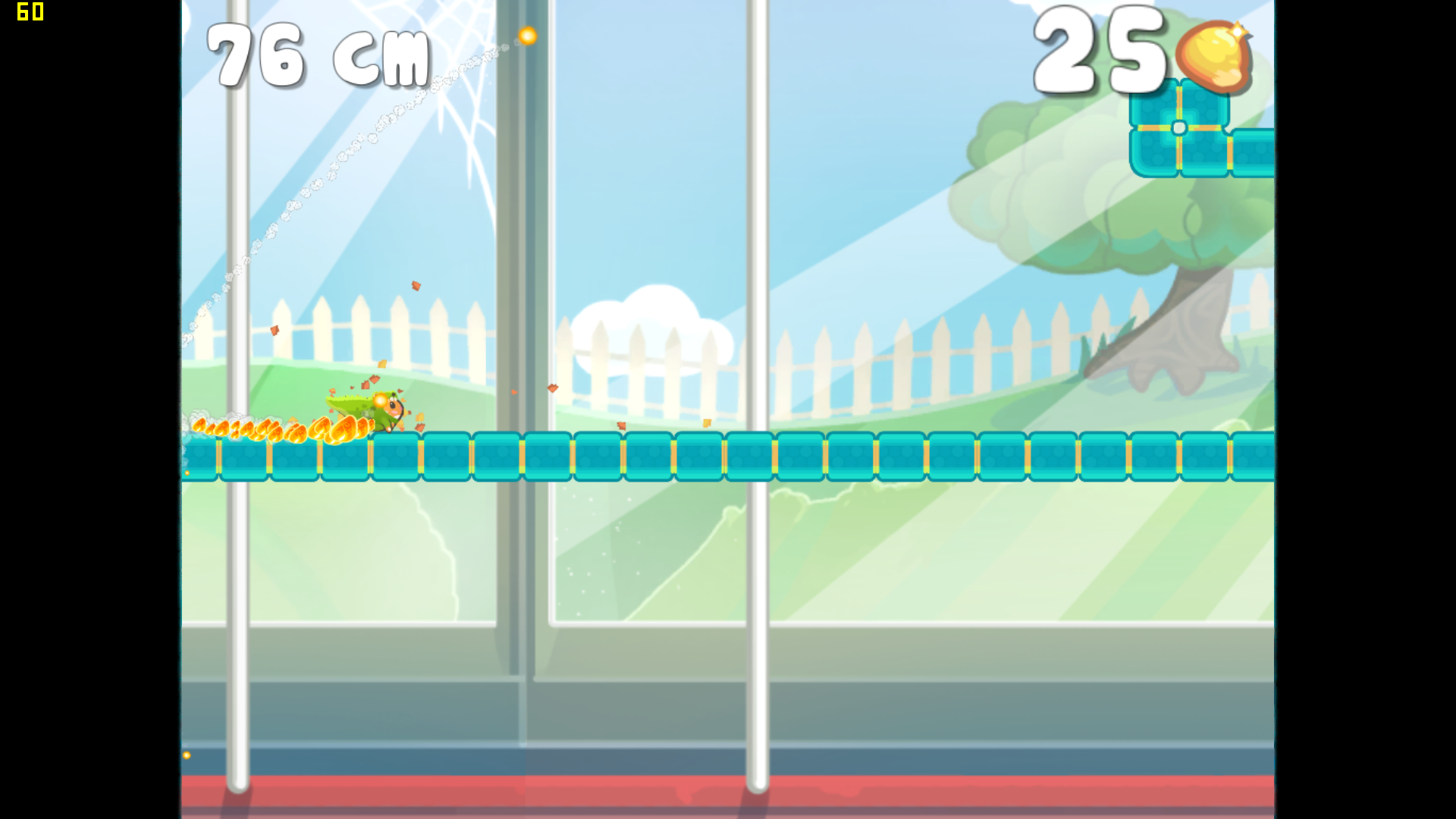 'Mr. Nibbles' is a browser platformer/endless runner available for free by Epic Shrimp, and 'Mr. Nibbles Forever' is the improved Steam version. The controls, as extolled by the devs, are simple enough for even a three-year-old to master in minutes: Mr. Nibbles never stops rolling but can speed up, slow down, and jump. He has two jobs: collect nibbles and avoid spiders. Despite the simple controls this is a challenging game. Even a single spider bite results in a game over, and the little bastards are tricky to avoid, especially as Mr. Nibble’s jumps can be unpredictable.

Each of the challenges has its own specific object, and I was required to stick with that level until I had finished. Otherwise, the only real objective as Mr. Nibbles is to grab those nibbles, which are used to spin the wheel of fortune and receive goodies, like new outfits. An actual level select would have been nice, as the current interface is rather confusing and very limited. 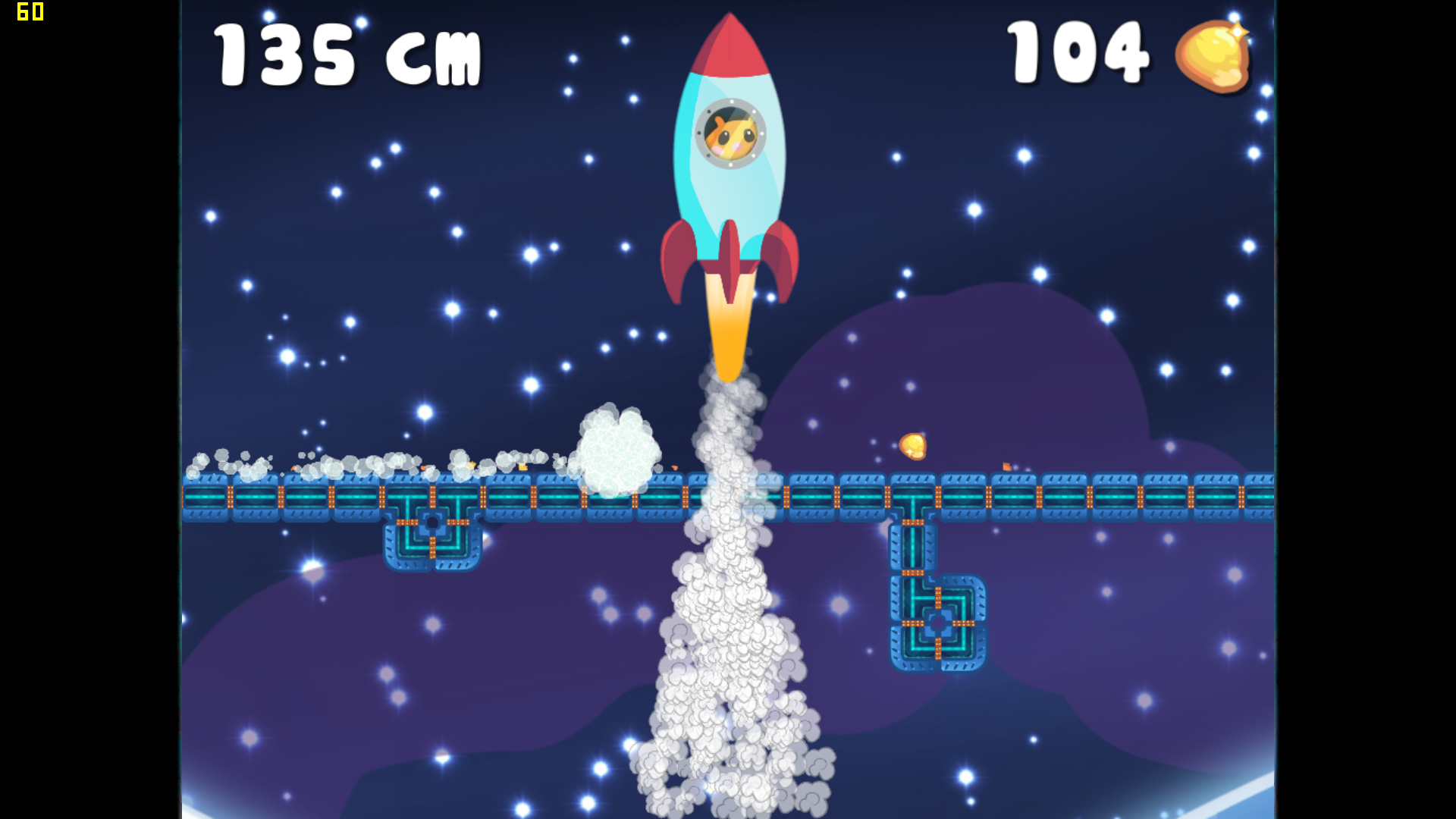 'Mr. Nibbles' is classic platforming goodness, although it can get repetitive after a few hours. New levels, challenges, and outfits are unlocked with successful runs, which are used to unlock more of the same. Between the cutesy design, quick and straightforward mechanics, and its tendency to chafe after too long, it would be a perfect mobile/handheld game. On PC it’s a fun endless runner but there are many games like this with more features and content. Of course, for only $3 it’s also a bargain, particularly if you have enjoyed the previous Flash game. On the technical side it is very competent - the framerate can keep up, models and animations are smooth and pretty, and controls are precise. 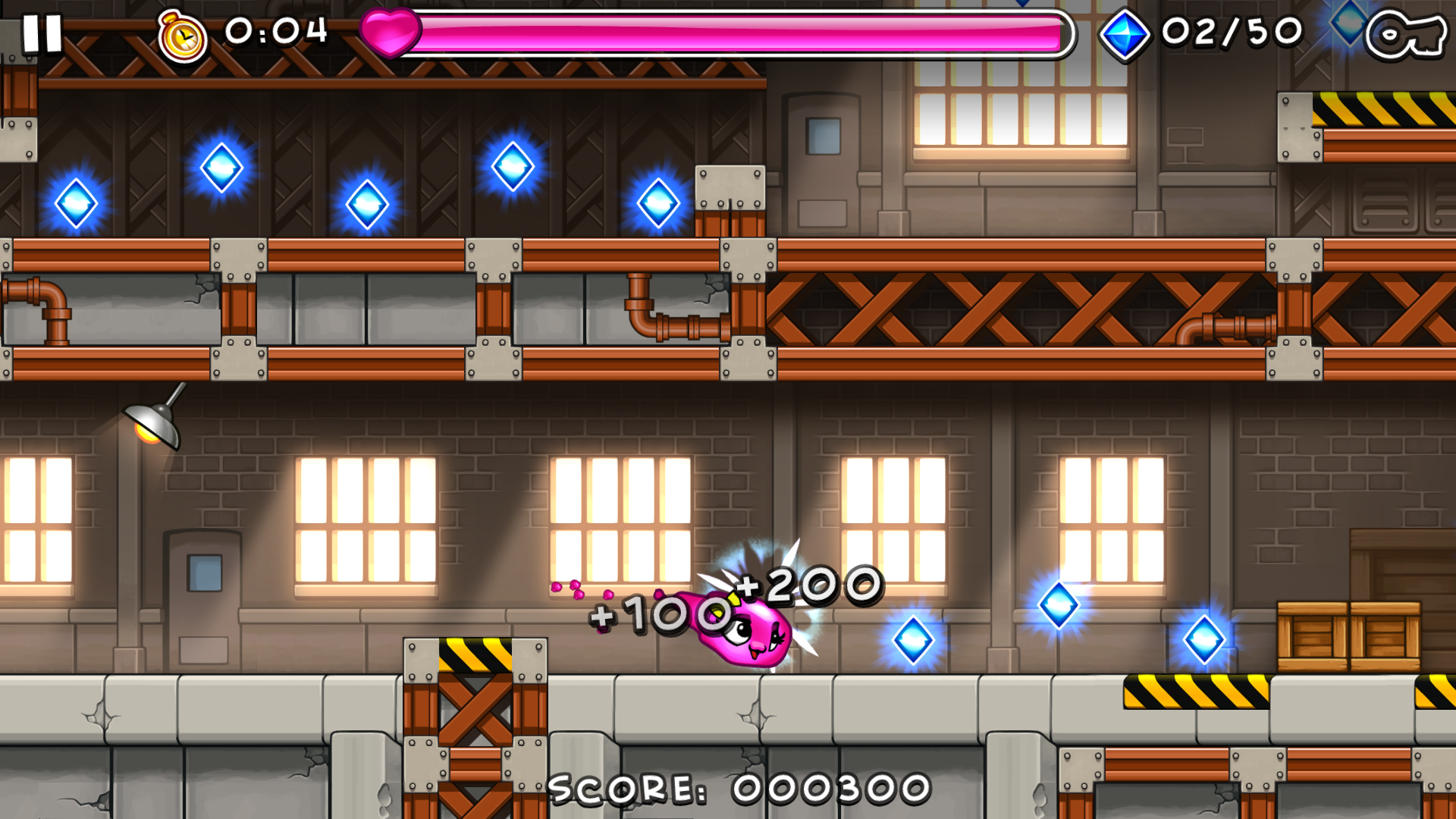 The third game in our set is 'Spunk and Moxie', ported over from its 2013 iOS release. This is another platformer, but not of the endless level variety. Even so, it’s still very fast moving and challenging. The titular characters are little blobs who race around each level and can bounce off the walls as much as they like. The levels are expertly designed with big jumps and tiny crevices that require accuracy to navigate properly; thankfully the blobs are nimble enough to avoid death by bouncing back and forth along the walls of bottomless pits. There are other ways for them to die, mostly in the form of environmental hazards like spikes, which of course are common in areas where collectibles are found.

The game quickly gets more advanced and tougher with the addition of walls that can be destroyed to access secret areas and new paths, items to upgrade the blobs and make them more badass, and dangerous obstacles. My only complaint that there are no checkpoints, so dying far along in the level, even right next to the exit, means a restart. It’s not terrible because the levels are so short, so I happily jumped along the floors and walls with Moxie and blasted through chokepoints for time and score records. There was a lot of death, not to mention backtracking because Moxie never stops moving, but by and large it is worth playing, especially for fans of the genre. 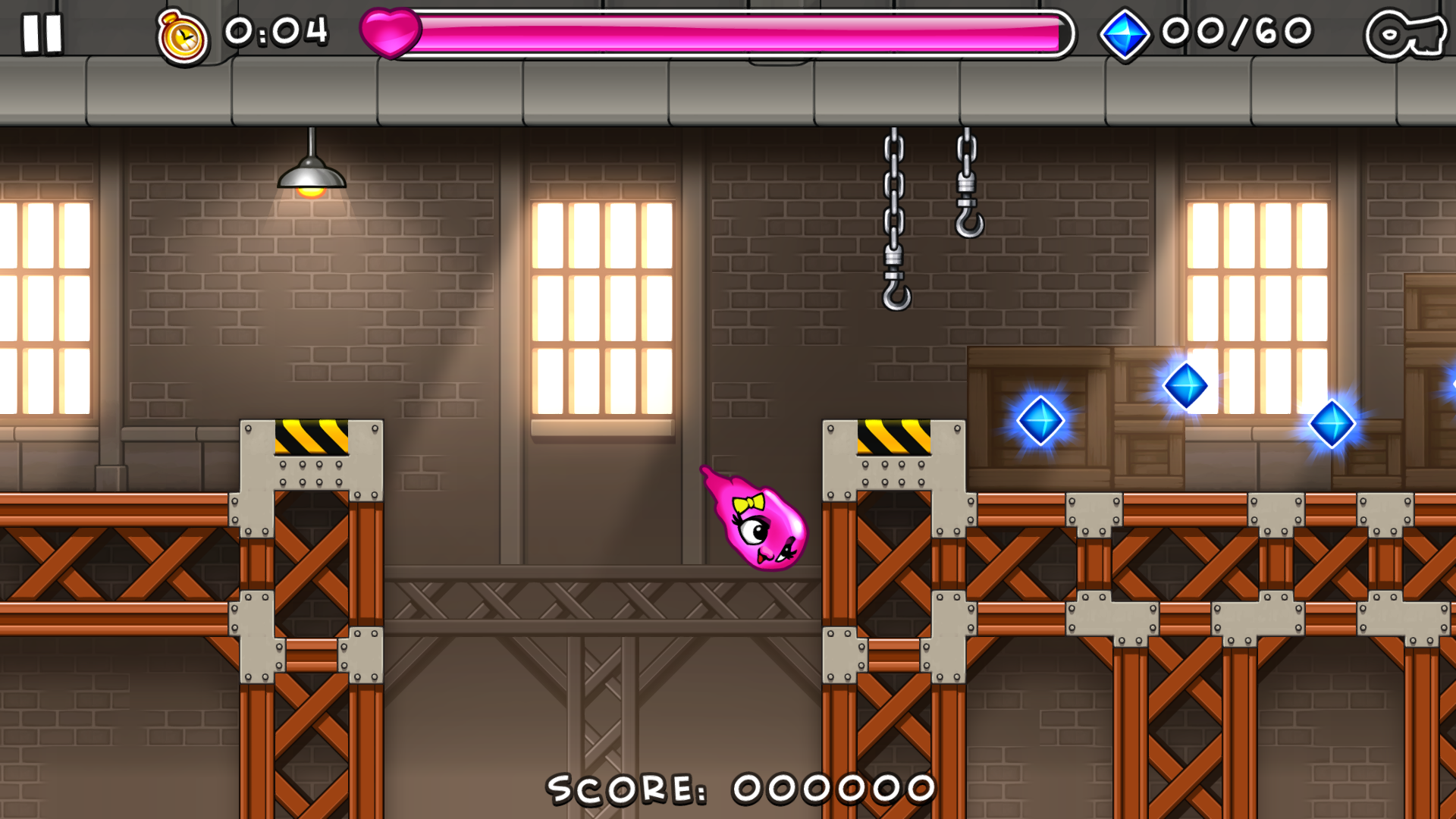 Although it’s a challenging game with frequent difficulty spikes, 'Spunk and Moxie' is a great platformer for killing time or just getting better at platformers in general. There are still only 30 levels but unlockable stuff extends its life, like tribute skins for other indies such as 'Spelunky' and 'Super Meat Boy'.

Overall this trio is grab bag of tough, inexpensive platformers and a weak strategy entry. We recommend both 'Mr. Nibbles Forever' and 'Spunk and Moxie' (the latter more than the former), and highly recommend skipping on 'Acorn Assault', which falls short of any kind of engaging tactical gameplay.